Orion Up NASA took the first step in getting back into the manned exploration of space business today with the first launch of the Orion spacecraft/Delta IV Heavy rocket system.

I admit to a small amount of disappointment.  When I first heard of the Orion project, this is what I thought of immediately, not the usual rocket/capsule arrangement.  Sure, there's that pesky "nuking your own planet" thing, but I'm sure they could figure something out.

Still, this new Orion is planned to be used to get us to Mars.  However, for this launch it was unmanned... which doesn't mean there wasn't anything on board.  The TV show Sesame Street donated mementos to the flight, including Cookie Monster's cookies, the Inchworm, Super Grover's cape... and Ernie's rubber duckie. 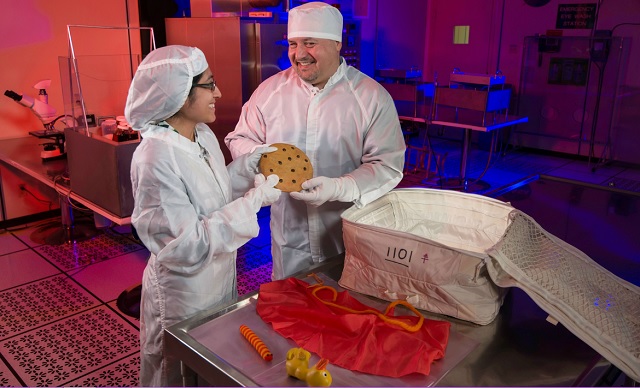 If that isn't the coolest darn thing ever, I don't know what is.

"Still, this new Orion is planned to be used to get us to Mars."

Someday...maybe.  I wouldn't count on seeing a manned mission to Mars in my lifetime, when it's supposed to be done with a ship that's going to get test flights at a rate of 1 every 3 years.  The children of the people who flew on a Dragon capsule will be greeting the Orion crew.

2 No rapid post-launch disassembly, no unplanned lithobraking. Have we learned nothing from KSP?

3 Did they actually achieve orbit? How many orbits did they do before bringing it down? Where did it come down? (I know that it's an ocean lander, like Apollo, rather than a land-lander, like the Russians use.)

"How many orbits did they do before bringing it down? "

I believe the plan was 2 orbits.

Here's a story about it.  Looks like it went (briefly) into a pretty highly elliptical orbit so they could do a full-test high-speed reentry.

5 Two orbits, water landing, I thought I read somewhere that it was about 200 miles west of San Diego but I can't find that reference again.

7 It goes on to say "...before bringing it to port in San Diego."  Guess that's where I got it from, just got jumbled in the ol' brain thingy.