Thanks to Robert for his efforts on the behalf of all the Kanonistas out there.  He somehow managed to convince ADV to let him sell the first DVD of the show a couple of weeks ahead of the streetdate (1/1/200

... of course, as soon as I found out, I placed an order (along with four boxes of Chocolate Decorer Pocky).  A few days later, it arrived in good shape, with only ONE Pockystick broken.  He's the bestest!

Now, if I can only convince him to get the Kanon soundtracks in stock...

I've been watching Zipang! recently, and the Pacific War otaku in me is giggling like a schoolgirl.  I had a post about half-done, but I pressed the wrong button and poof, all gone.  Still, here's a preview: 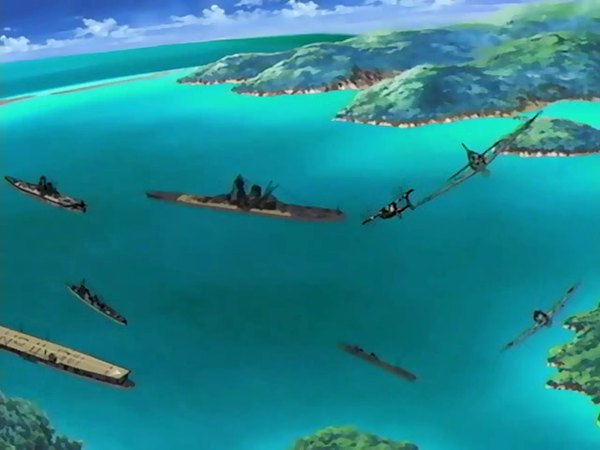 Yep, that's the Yamato there in the center of the harbor at Truk... guess Yurie's been around, huh?  Actually, the anime's set in 1942-43, so the Yamato hasn't been sunk yet.  The show is full of "anatomically correct" technical details, the type that would make Tom Clancy drool in recognition... like the revelation that the Rufe carried an auxiliary fuel tank in it's mail float, for example.  Watch for the post soon.

Oh, and because I know you've all been wondering, the cookies the Librarian's Mom gave me are quite yummy.

An Aegis destroyer in that era would do really well -- until it ran out of ammunition. Then it's just a hull. No way they can get any reloads. They do carry quite a lot of ammunition, but not enough to win a war. At least not that war.

Interestingly, an Aegis destroyer would be vulnerable to attack by the SB2C Helldiver. The Phalanx can't elevate high enough to shoot at something coming down at that steep of an angle, and an Aegis doesn't carry enough SAMs to defend itself against 30 or 40 of them. Add to that a swarm of TBF Avengers and F6F Hellcats carrying bombs, and if the attackers were willing to accept losses they could overwhelm the defenses of a single Aegis cruiser and hit it multiple times with 500 and 1000 pound bombs -- which are huge and deadly.

Phalanx can elevate to +70degrees, but you're pretty much right: a dive bomber like the Val or Dauntless (the Helldiver wasn't in squadron service in1942) would be dangerous.  Yes, the Val.  The Mirai is a Japanese ship, but not an IJN ship... and the intrigue is thick on the ground.

Of course, divebombers were dangerous to even the heavily armored ships of the time, too, so...

FWIW, the crew of the Mirai ARE concerned about the lack of reloads, and admit that they're screwed if they get into a fight... which makes things even more tenuous for them.

You bet your sweet ass they were dangerous. Post analysis of the damage done to Yamato concluded that even though it was hit about a dozen times by torpedoes, it was a dive bomb that actually destroyed it.

One of the earliest hits by a dive bomb started uncontrollable fires which eventually set off the magazine under #2 turret, blowing the ship in half.

4 Given that the crew of the Mirai want to stay out of trouble, and also given that either side could attack them, shouldn't they avoid contact with anyone? I know it would make for a boring show, but running away may be their best short-term option, and they may be in good shape to do that. The Aegis radar would be quite useful for detecting patrol aircraft from far away, and modern passive sonar would also help them avoid being sighted by submarines. As well, they could use their knowledge of WWII history to head for parts of the Pacific where not much was happening. (Would the Mirai have a significant speed advantage over WWII-era surface ships? If so, that would be useful, too.)

OTOH, even the slowest WWII-era patrol aircraft could outrun a modern destroyer; as callous as it seems, I suppose the Mirai would have to shoot down a patrol plane before it made visual contact, and hope that the crew didn't have a chance to make a Mayday call before going into the drink. As well, heading for the Antarctic may help them avoid battle and save their ammo, but running out of fuel (and food) would then become their main problem.

Peter, I'll answer those questions in my post on Zipang!, but history stopped applying in episode 2, when they rescued the passenger of a shot-down floatplane...

The Mirai doesn't have a huge speed advantage over similar-sized WWII era ships, it has an acceleration advantage.  Gas turbine engines get to full power very quickly (in nautical terms, at least).  Unfortunately, they also swallow fuel at a prodigious rate... which forces them to stay in the Greater East-Asia Prosperity sphere.

In fact, much of the first 8 episodes involves them trying to scam food and fuel.

Interesting, so they animated The Final Countdown from a Japanese perspective.

The Nimitz would run into a similar problem for ammo and rations, but the nuclear reactor would be good for the entire war and then some. (and that whole class of carriers are faster than they have any business being)

I always enjoyed the scene of the Tomcats blasting by a couple Japanese scout aircraft.

It turns out that there are reasons having to do with fluid dynamics why trying to move a traditiona hull through the water at faster than about 35 knots is really difficult. The problem is that the resistance rises a lot faster than exponentially, so it takes huge amounts of power, far more than is practical to put even in most warships.

If you want to go fast, you have to use a different hull shape -- either a multihull or something that hydroplanes or has hydrofoils.

And propulsion is a problem, too. When you try to move water too fast with a screw propeller, you start getting cavitation. This not only reduces the efficiency of the propellor, it also makes a lot of noise, which makes you stand out on enemy passive sonar. Surface ships aren't stealthy, but making excessive noise is never a good thing.

Cavitation is the reason for something I long suspected but only recently learned was true: our nuclear submarines are faster when deep than they are on the surface. When they're deep the water pressure is higher, so they can run the props faster without cavitation. When they're on the surface, if they run the props full power all they do is kick up a lot of spray behind the sub.

So no, Aegis cruisers don't have a speed advantage over WWII ships of that size or smaller. Or not much, anyway.

8 Rats. I meant to say that the resistance rises a lot faster than linearly. I don't know if it's exponential, but I know that there's a point where it gets extreme.

If a modern ship has a speed advantage, it's only because of the power/weight ratio... more grunt per pound always works, though it does eventually hit a point of diminishing returns.

Will, that's exactly right, except (so far) without the time-travelling ship helping "their side".  Imagine the difference an Aegis ship would have made at Midway...

One of my friends is a Jane's-junkie when it come to naval stuff. He's also got an impressive catalog of anecdotal evidence putting the real maximum speed of the early Nimitz carriers somewhere in the 45 knots range.

I'll have to ask him to jog my memory on which emergency it was exactly, but one story he told me involved one of our carriers taking off out of Norfolk and beating-cheeks down the East Coast (within sight of land) fast enough that it was outpacing coastal highway traffic. But he also mentioned that they nearly twisted a screw off in the process. At "something less than" full power each prop shaft is deformed one full rotation by the torque, and any more risks damage.

Imagine the difference an Aegis ship would have made at Midway...

Exactly the kind of difference a Late Cold War Era Supercarrier would have made at Pearl and throughout the entire Pacific campaign. Over the horizon radar, ore command & control / computing capabilities than the entire fleet in one ship, and an airwing (likely nuke-armed) capable of kicking in Hirohito's door and leveling Tokyo days after Pearl.

And I love the last exchange in the IMDB quotes page.

I've heard those kinds of stories about the top speed of the Nimitz carriers, but I'm not sure how much I believe them. There's plenty of power inside the ship; the problem is using it.

That issue of the strength of the shaft is a very real one. The De Gaulle dropped one of its props into the Med when it was new, and had to be towed back to port.

I'm wrong. The De Gaulle dropped a prop into the Atlantic.

During the night of 9 Novemberâ€“10 November 2000, in the Western Atlantic, en route toward Norfolk, Virginia, the port propeller broke and the ship had to return to Toulon to replace the faulty element. The investigations that followed showed similar structural faults in the other propeller and in the spare propellers: bubbles in the one-piece copper-aluminium alloy propellers near the center. The fault was blamed on the supplier, Atlantic Industries, which had already gone bankrupt. To make matters worse, all documents relating to the design and fabrication of the propellers had been lost in a fire. As a temporary solution, the less advanced spare propellers of Clemenceau and Foch were used, limiting the maximum speed to 24 knots (44 km/h) instead of the contractual 27 knots (50 km/h).

It may have been Enterpise I was thinking of, not a Nimitz class. She was in Norfolk when the Cuban Missile Crisis kicked off and had to get to Cuba in a hurry. She had 8 smaller A2W reactors instead of the 2 larger A4W reactors of the Nimitz and is reportedly the fastest of the super carriers (if her motto is to be believed).