Now It Can (sorta) Be Told! I'm sure many of my sharp-eyed readers have noticed a decrease in output, quality and change of tone here at The Pond of late.  Indeed, this would be true, and a quick look at the sidebar would indicate just exactly when this occurred: August 2013.  That was, in fact, when the problems began.

First, my Assistant Manager left for a good job in her field of study.  I don't blame her for that at all, it was a dream setup for her!  However, it did leave me hanging as the store went into the beginning of the new school year shorthanded.

Part of it was because I had a less-than-optimally experienced staff... three rookies, essentially... to handle the deluge.  Again, no blame accrues to them at all.  The bulk of the problem, though, is that I didn't deal with it well.  Important things didn't get done on time, if at all.  We ran out of some hard to acquire product, and a complaint about that made its way to a department chair, a provost, and two vice-presidents of the school... all of whom made it clear that this result wasn't acceptable.  When my Regional Manager stopped in at the end of August, he lowered the boom on me and made it clear that if things didn't shape up in a month, I'd be out the door.

For the next month, I worked feverishly, coming in early and staying very late every day.  12 hour days were the norm during the week, and I was there most Saturdays as well.  I felt confident that when the RM arrived, he'd be impressed and pleased with my efforts.

According to him, I had done just barely enough to keep my job.  When he came back at the beginning of November for inventory, I'd either be retained or fired... no more chances, no more "just good enough."  To say I fell into a funk would be an understatement.  I had worked my asterisk off and then told it wasn't good enough.  I pushed as hard as I could for the next month, but in a lot of ways, my heart wasn't in it.  I knew that my nearly 10-year run at the store was over at the beginning of November.

Except it wasn't.  In Mid-October, my RM took a month's leave, but made it clear that his boss could come in at any time and make the judgement while he was gone... and she was based three hours closer to me than my RM.

My RM never returned from leave (that's a shame, too... he was a GREAT boss to work for), and his boss never came to the store, but at the beginning of January a new RM was named.  His first visit to the store was delayed by the ridiculous cold we've had here in the Midwest... everything was closed and only the very brave or very desperate went on the roads when it was -25° out... but he made it to the store yesterday.

He loved it.  Thought the store looked great (it really did, by the way), looked horrified at the fact that I've been the only keyholder since August 1st, was here for about 90 minutes and then left.  Not once was anything brought up about the Sword of Damocles above my head... which suggests to me that it's no longer there.

This is the first weekend in five months that I don't feel like I need to go in for a few hours.  I don't feel like the weight is off my shoulders... I'm still the only keyholder, and there's no sign of that changing soon... but the headman's axe no longer feels like it's about to fall on my soft neck.

It might still. But for the first time in a half-year, it doesn't seem like it's going to happen on the next time I go to work. 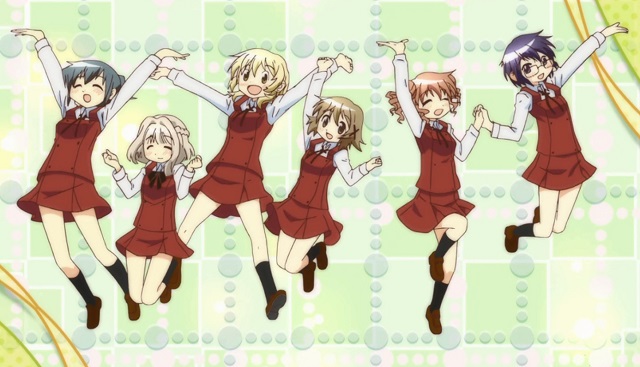 I can live with that.

1 So, nobody's found the previous RM's body yet then? *grin*

That which doesn't kill us makes us stronger. Or makes us want to wallow in cutesy anime, one or the other. I forget which.

3 Chances are there wasn't an OBJECTIVE reason for his dissatisfaction with you...

I didn't go into details, but there kinda was.  His reason for not returning from leave was quite good too, but there's no reason for me to go into that.  I'll just say "family always comes first" and leave it at that.  Strange as it may sound, but I really liked the previous RM, as I know he liked me... in other circumstances, he'd have been a drinking buddy / football watcher for sure.

Mikeski, I don't need an excuse to wallow in cutesy anime.

4 Glad to hear that there's light at the end of the tunnel.  I was seriously worried about you.

6 The expectations of our superiors is always so flexible, and rarely ever solely based on quality. I'm glad you cleared this rough patch. A good supervisor or manager will know enough about where their own head is at to take personal attitudes into account.

Having said that, we are all human and we behave that way.

Have you recovered some of your optimism towards your job?

7 Oh, wow. HUGE sigh of relief. Several of them in fact. WHEW.

8 Congratulations. But I also hope they send you some serious management help!