Memorial Day 2012 On Saturday, the USS Iowa was moved from San Francisco to Los Angeles.  Thankfully, reader Vaucaunson's Duck and his friend, Zippy, were there with cameras.  It seems appropriate to show the Iowa's final voyage on Memorial Day. 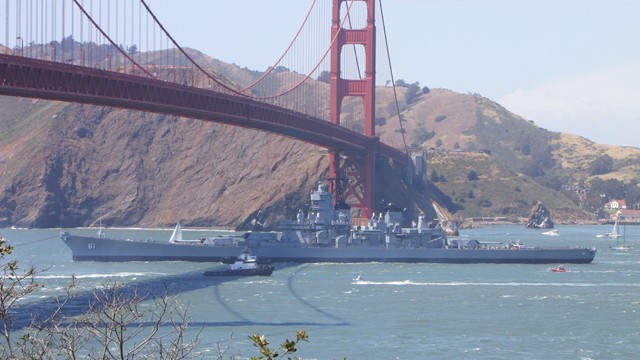 For all those who have served our country and given all they could, I say thank you.  It's not enough, no mere words could ever be enough, but it's all I can do on this silly little blog. 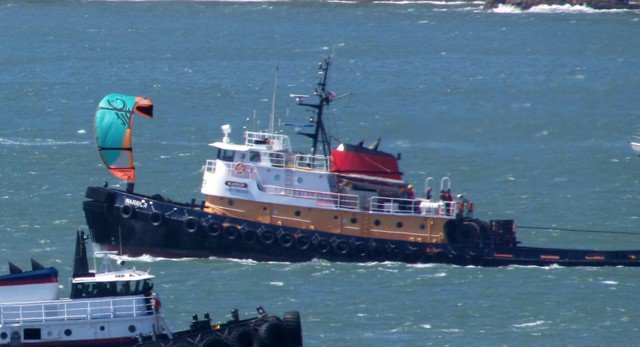 Do her engines still work? Is she moving under her own power?

Likely not; I see a tow cable up front. What was towing her?

2 Iowa is being towed, by the tug Warrior.  Supposedly only doing 4.5 knots, but tracking shows her over half way to San Pedro already.

3 Steven, her engines do still work, though they're not being used.  She's still eligible for reactivation, and by law must be able to be "rapidly" brought back into the fleet.

Of course, the bathtub is still on board.

If you've never seen a battleship with your own eyes, you can't really understand just how immense they are. I've seen USS Massachusetts and walked around (and inside) her. That one's a lot smaller than Iowa, but it's still immense.

That's at Battleship Cove. They also have USS Joseph P. Kennedy (a destroyer) and USS Lionfish (a WWII submarine), and I did it in the other order.

Lionfish is tiny and cramped. It's hard to believe that more than 50 men lived on something that small. Moving up to the Kennedy, it seemed quite spacious, and huge by comparison. But the Massachusetts? Sheesh, it was like an island. It was hard to believe something that big could even move, let alone cook along at water skiing speeds.

5 The Boss Lady and I toured the New Jersey in October last year.  As you said, the Iowa class seem to be immobile islands - but can run with an LA class sub.  The "R2D2" CIWS seem incongruous on a BB, but no more than the Tomahawk missile cells also mounted on her.  Well worth the time spent in New Jersey.  Wish I'd seen the old girl under way....

6 That picture of Warrior confuses me. Is it using a spinnaker? Or is that someone windsurfing in a major traffic lane?

7 It's not actually part of the Warrior.  There's a... call it a party tug... traipsing around the area that the "sail" is attached to.  I have no idea what the point of it is.

8 Let me explain my poor English.  The party tug is traipsing around the area.  The sail is attached to the party tug.

She's still eligible for reactivation, and by law must be able to be "rapidly" brought back into the fleet.

That is what the law said regarding the IOWAs when they were mothballed for the last time, but even in the 1990s, it was an open secret that no money had been authorized to keep the ships in such condition.  Many a time the veterans of the old sci.military.naval newsgroup on UseNet broke the news, gently and otherwise, to the newbie who wanted to form the battle line again.

I had the great fortune of visiting the NEW JERSEY years ago at her current berth and despite knowing how big she was, it was still a surprise to see it in person.  The IOWAs were also among the most beautiful battleships ever built, and along with NORTH CAROLINA, certainly the most beautiful of those left.

Oh, and since we are talking big, I am calling in one of my markers and asking you to do an overview on the Xeno series of games by Monolithsoft, i.e. Xenogears, Xenosaga, and now Xenoblade (Yeah, I just got the latter game.).  Definitely not expecting to see it anytime soon, but someday.  And let us see if anyone can see the amusing connection the latter has with a certain other sci-fi long runner...

10 CXT, I'd love to, but there's a serious problem with your request: I don't have a Playstation/Wii/Xbox.  Or any other game console, for that matter.  Haven't had such a thing since the Atari 2600.  If one appears in my apartment sometime in the future, I'll do it, but...

I don't have a Playstation/Wii/Xbox. Or any other game console, for that matter. Haven't had such a thing since the Atari 2600.

You are very, very good at showstoppers.  Yeah, that would make things...difficult.

Oddly enough, I was looking at an Atari 2600 today, along with other interesting game consoles from the days of yore that I never saw in person before.

Even if one of  the Iowas were reactivated, the big guns couldn't be used. The factory that made the gun liners was shut down decades ago. The Navy made a final purchase but I believe those liners have already been used.

So it's not clear just what they'd be useful for at this point.

13 Steven, I believe I recently saw the government excessing spare 16" barrels on the condition that they be demil-ed by the purchaser.  The picture showed fifteen of the barrels.  But the only thing I found today was HERE.  The auction closed over a year ago...  Wonder if they are no more.

(Wonderduck sez: T.O.M., I had to delete your original comment because you had the full-length link in the body.  Please, please, please use the link tool in the top of the comment bar.  It looks better, and it sets off fewer spam alarms.)

14 Even if those liners were still around (they're not full gun barrels) I bet the Navy yards no longer have the ability to remove the old ones and put new ones in.