It's Book Review Time! A while ago, J Greely of .Clue mentioned that an old series of Star Trek books was available in omnibus form, bringing back fond memories of Ensign Rock and Romulan history and much derring-do from characters other than the bridge crew of the Enterprise.  This reminded me that old novels that I haven't thought about in decades were available at the click of a mouse.  I didn't actually act on that information right away, but it was there.

Somewhat recently, a NPR report mentioned that "Father Andrew Greeley" passed away in 2013.  I knew the name, but I couldn't place it exactly.  When I got home, I hied myself off to google, and suddenly it all came to me... the Writing Priest from Chicago!  Of course.  And I had even read one of his novels, to boot... and remembered enjoying it, too, a very long time ago.  A few clicks later, and it was on its way here.  It took a few days to get to it, but once I did it went quickly and in a 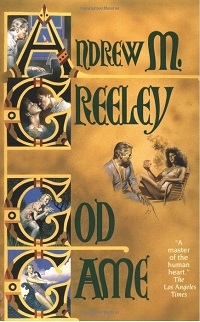 pleasant manner.  I last read God Game (1986) when it was only a few years old and some of it is amusingly dated, but despite that it holds together nicely.  The main character is a Chicago Catholic priest that's asked by a relative to playtest a computer game he's working on.  Duke and Dutchess is big, coming on a whopping eight floppy discs, and the "fast" version is designed to run on computers using the new 286 processor.  It's interactive fiction that the player can control, with at least 50 possible endings., limited animation, and a huge vocabulary of commands available.  And if you hook it up to your TV, it's in color, too!  In a small swords & sorcery world, there's two warring nations, ruled by the game's titular characters... and from there, it's up to the player to decide where the story will go.  The first night he starts in on the game, a big thunderstorm rolls in off Lake Michigan, and as he's playing lightning strikes his C-band satellite dish.  When the power comes back on, he finds that the graphics are now exceedingly lifelike, and that the characters now consider him as their God... or something like it, at least.  Suddenly the game has become all too real... imagine a cross between The Sims, Civilization, and a Visual Novel coming to life.

While God Game is primarily a fantasy novel, as you can imagine the philosophical conundrums of playing God (or being an author, which the narrator equates to being the same thing) play a large part in the story.  While interesting, it's the actions of the game's secondary characters that are of the greatest interest.  Their contact with "God" is quite personal, hearing his commands directly when directed at them, so it comes as no surprise that they talk back.  They consider themselves to be worthy of elevation to main character status, and work to get to that point... or not, depending.  But then they start showing up in the Player's bedroom in late night dreams, to have a talk with their God.  One of them has a fondness for Bailey's Irish Creme, but when the narrator wakes in the morning, there's an empty bottle on the end table...  And why do the secondary characters' events in the game start spilling over into the Real World?

In many ways, God Game is a delivery vehicle for a sermon on the perils of hubris and cause & effect.  However, much the way Robert Heinlein couched his lectures in Starship Troopers in an action novel, Greeley succeeds in masking the preaching (pardon the pun) in an entertaining story.  It's light enough fare to read casually, but you get out of it what you put in to reading the book.  There's quite a bit of meat here, particularly if you're a player of RPGs or so-called "4X" titles.  Actually, I wonder if Sid Meier or Wil Wright have read God Game.  It wouldn't surprise me much if they had.  A very good read on many levels.

Similarly, I was doing some research on Scapa Flow, the Royal Navy base in Scotland, when I came across a reference to the Picts.  That reminded me of another book I had read around the same time as God Game, a rollicking bundle of violence and sex called Calgaich The Swordsman.  Unlike the first book I reviewed in this post, however, there's absolutely no philosophy or introspection in this one... nor should there be: it's not that type of novel. 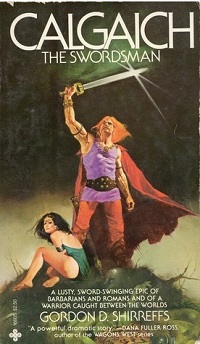 Calgaich is a part-Celtic, part-Roman swordsman, raised in one world but due to his Roman side, having served in the Roman Auxilaries.  Exiled for killing a fellow warrior, the book begins with him returning to Scotland for the first time in years.  Blood soon soaks the pages as he hacks, slashes, stabs, chokes, spears, punches and kicks his way through Pictish war bands and tribesmen displeased that he killed the son of the now-chief.  He's soon off to Hadrian's Wall to rescue his elderly father, the prior chief, from the hands of the Romans.  Eventually, he is caught and shipped to Rome to become fodder for the Games.  Along the way, he meets other colorful prisoners, all of them skilled fighters, and he's already making plans to escape...

Gordon D Shirreffs was primarily a writer of Westerns novels, churning out more than 80 of them in a career that spanned some 40 years.   Four of his novels were turned into films, including John Wayne's Rio Bravo.   Unsurprisingly, Calgaich has many similarities to a Western, with showdowns of honor, bravery, revenge, and lots of dead bodies left in the dust.  Surprisingly, the book seems rather well researched, not that I know anything about Scottish history or much about the Romans in Brittania.  Shirreffs was Scottish by birth, moving to America in his youth, so it's unsurprising that he knows enough about the history to make it read convincingly.  In the end however, Calgaich is a Conan knockoff, but an entertaining enough one.  In the long run, the book would be totally forgettable save for the historical footnote of being the first novel released by Playboy Press.  I bought this from a used book store while looking for D&D-style books, so the rather lusty sex scenes came as something of a surprise, as did the tone being more realistic than what I was expecting.  It's not a bad book, honestly, but it's pretty much disposable pulp.  I like it more because of the memories I had of it than any particular qualities it may have.  It's certainly worth the $.25 you're likely to spend online for it... leastwise, that's what I spent for it!

So there you have it!  A couple of old novels from the reading history of Wonderduck... enjoy, won't you?

1 The only two Greeley (no relation) novels I've read are God Game and The Magic Cup. I'm quite fond of both, though I hadn't thought about the latter for a number of years. My copy must have grown legs, or I'd have spotted it on the shelf.

2 One of these days I hope to stumble across more of the Casca series by the late Barry Sadler, author of the Vietnam memoir I'm a Lucky One and, more famously, "The Ballad of the Green Berets."  The one I read was, well, actually pretty good.

The set-up was that the Roman soldier who stuck the spear into Jesus's side was doomed to roam the earth until the Second Coming, which involves getting into whatever war was available (and repeatedly learning that quasi-immortality doesn't spare you great suffering).

Note:  The series goes on, but only the first couple dozen were written by Sadler, who died in 1989 after getting shot in the head under somewhat nebulous circumstances in Guatemala.

3 I remember reading Greeley's Angel Fire, and one or two others.  I didn't realise he'd written so many books - Wikipedia lists 67 novels and 82 non-fiction works.