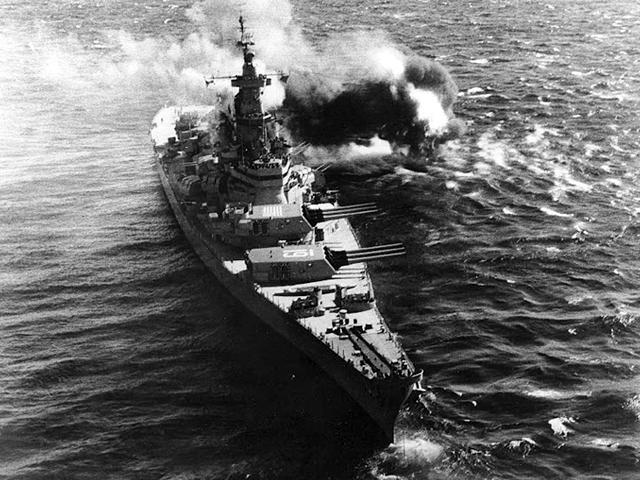 The USS Iowa was the namesake for what was arguably the best class of battleships ever built.  Launched in 1942, she was commissioned in 1943.  Displacing 45000 tons, her engine rooms could still move her through the water at a blistering 33kts.  Her main armor belt was 12" thick, while her three main turrets were armored to nearly 20" in thickness.  Those turrets carried three 16"/50cal rifles each, and each of those guns could fire a 2700lb shell over 23 miles.  Twenty 5"/38cal guns formed her secondary battery, and could be used for both anti-aircraft or anti-surface work.  Four of the mammoth warships were built.

But only one had a bathtub.

Late in 1943, the heads of state for the three major Allied countries, Joseph Stalin, Winston Churchill and Franklin D Roosevelt, were to meet in Tehran for a strategy conference.  The US Navy choose the USS Iowa to take President Roosevelt on the first leg of the journey to Iran, crossing the Atlantic Ocean.  But there was a small snag.  President Roosevelt had developed an illness in 1921, at the time diagnosed as polio, that had paralyzed him from the waist down.  He could only walk by swinging his legs laboriously via a twist of his torso, and leg braces and crutches were mandatory.  FDR was also pretty much incapable of standing without assistance from one or two individuals.  This ruled out his use of a shower, at the time the only form of bathing available on US warships.  As the trip would take quite some time, something had to be installed for his use.  That something was Iowa's Bathtub. 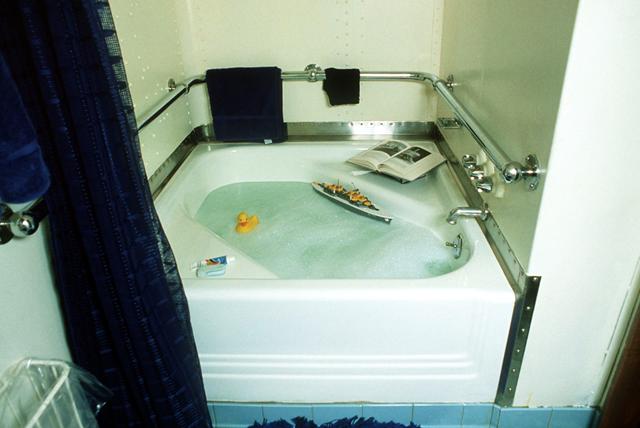 1 Wait a minute--"at the time diagnosed as polio"?  What was it, if it wasn't polio?

2 Wait...did you photoshop in the duck?

3 Ed, apparently Guillain-Barre syndrome is the current frontrunner.  Take that for what it's worth... without a test of FDR's spinal fluid, we won't get a solid answer, and his spinal fluid is in something of short supply these days.

Muppet, I didn't.  The picture was taken sometime in 1980, so FDR did not have a duckie in the tub with him.

I will say that "Iowa's Duck" has nearly taken over first place on my "WANTWANTWANT" list from Yuno's Duckie.

4 Assuming that the toy boat is scale model of the Iowa, the full-sized duck must be immense!  It might even be the oft-prophecised Uber-Duck, Harbinger of the A-quack-alypse...

Normally, I wouldn't think so...but it *was* a Presidential Tub.

6 It was there in 1980 when that picture was taken. Can't think of any reason they'd have removed it since then.

8 Late information has crossed my desk; as of the Iowa's recommissioning in 1985, the tub was still there.