I woke up this morning with blood coming from a place that blood shouldn't ever be coming from.  I managed to get a doctor's appointment on short notice, and drove there this afternoon... about 40 minutes away at highway speeds from the Duck U. Bookstore.

After being poked and prodded and peered into ("Moooooooooon Riiiiiverrrrr..."), I was given more-or-less good news, though with one caveat: don't lift anything heavy for a while.

Oh.  With our big shipment of used books coming next week.  Oh dear.

After that, I drove to the Old Home Pond, to have dinner with Momzerduck and Ph.Duck.

On the way home after that, I was almost back to Pond Central when my engine suddenly started sounding like someone had put a can full of gravel into it.  I parked, went in, and called Ph.Duck, he of the high level of car knowledge... he said he'd be over as soon as he could.

So, I relaxed for a few minutes and checked the blogs of some of my online friends... where I found that Steven unintentionally trolled me.  Me, the KyoAnimaniac.

Then Ph.Duck pulled in and, when I joined him in the parking lot, said "well, that trail of fluid isn't a good sign... and neither is that puddle of fluid under the front of the car."

So I have to call Ricotta's tomorrow and figure out how to get the Official Car of the Pond towed there, without me having to be present, as I have to work... and then brace myself for the possibility that I'm going to have to get another car, as the OCotP is 13 years old and may not be worth repairing, depending on the diagnosis.

Enough already, I give up. 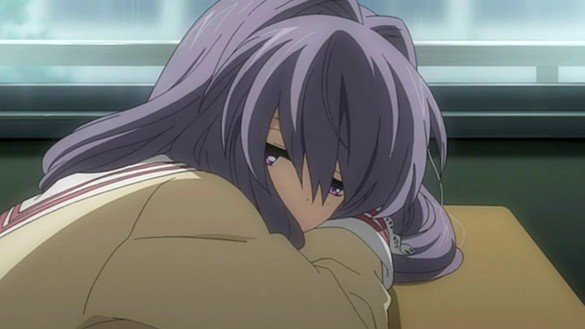 2 Oh, hellfire. My lousy day was mild by comparison...

3 Look at it this way: If you're a guy, and you wake up in the morning with blood coming out of...  well, coming out of pretty much anywhere other than a known stab wound - and the doctor just tells you to lay off the heavy lifting for a while, a broken down car is not a big deal.

I prescribe two boxes of strawberry Pocky and the widescreen version of K-On!

Having said that, hope you and the OCotP are both feeling better soon.

4 Well I thought one of the reasons for having a blog was to vent, whine, rant, and complain. After all nothing makes me feel better than to see someone having an even worse time. Get some ads for medical products going. Knew one poor guy who had to slam a tampax up his bum to keep going. I think car cost have driven more people to madness and bankruptcy than anything.

5 YIKES....July 8th....that means it's screw with Wonderduck week and I nearly missed it.