Hey, Everybody, It's Music Time! So on a whim this evening I told my media player to choose songs at random.  The first 10 to come up were such an interesting mix of styles that I was inspired to write it up as a post, which is what you're reading now.  Click below to hear what I'm talking about. 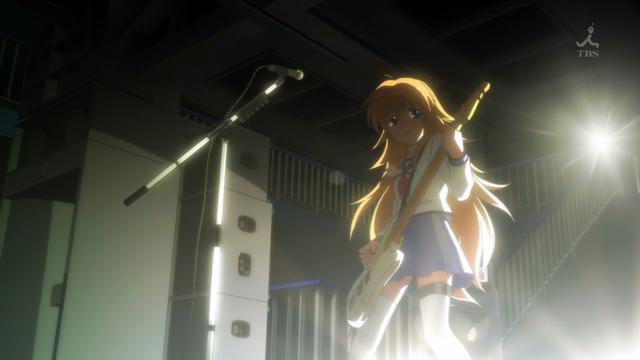 Let It Rock, Kevin Rudolf featuring Lil Wayne.
Look, let's face it.  Sometimes there are songs that are cheese incarnate, but yet they stick in your head like you've just heard the guitar hook from the Rolling Stones' Satisfaction.  For me, this is one of those songs.  Yes, I know the lyrics aren't very good.  Yes, I know the music isn't particularly good either.  Granted.  I don't care, I don't have a choice.  Yes, it annoys the heck out of me that I like this track.

NO, Thank You!, Afterschool Tea Time.
I was pleased when I saw this one was on the random playlist.  For quite a while it was on heavy rotation here at The Pond, to the point where my neighbors probably thought I only had one song in my collection.  The second ED from K-On!!, in my opinion it's the best song done for the series.  Plus, hey, Mio in a hoodie!

We No Speak Americano, Yolanda Be Cool & DCUP.
If Top 40 radio played more songs like this, I'd probably listen a lot more often.  The only thing in the past 20-some-odd years that I can think of that was remotely similar would be US3's Cantaloop (the instrumental version, itself a cover of a Herbie Hancock track), and I liked that tune immensely.  I tend to like the "different" songs, I guess.

Good Girls Go Bad, Cobra Starship.
Swear to god, the random playlist hates me tonight.  I do not like this song in the least.  "But Wonderduck," I hear you ask, "if you don't like the song, why do you have it?"  Simple... I heard it at work nearly six months ago, and just like with "...Angel.", an AMV appeared in my head, and it won't go away.  Every time it comes on the Duck U. Bookstore's in-store-music system, it jumps back in.  Two problems: 1) I don't have a video editing program anymore, and B) the show it uses isn't out on DVD yet.  So I sit and suffer... and plan, and storyboard, and formulate, and...

Help Me, Bryan Ferry.
Back in the '80s, I walked into the now dearly departed Appletree Records and asked the person behind the desk for something that sounded like Bryan Ferry.  She looked at me like I'd just peed on her leg and said "Nobody sounds like Bryan Ferry except Bryan Ferry."  In the 25 years since then, I've never found an artist that gave the lie to her statement.  His music, either with Roxy Music or solo, always sounds like you're leaving a formal party late at night, tuxedo rumpled and bow tie undone.  His more recent stuff is overly produced, but songs like this and Slave To Love... quintessential Ferry indeed.

Birth School Work Death, The Godfathers.
There was a time when rock was post-punk and pre-grunge.  Nobody was quite sure where it was going to go, but some bands, like The Smithereens for example, didn't much care.  I was deep into them, learning that good music could be done without a keyboard even being in the building.  When I was investigating this phenomena, I stumbled across this gem by The Godfathers.  It just barely cracked the Top 40, for one week, then disappeared... but lives on in my mind as one of the best guitar rock songs ever.  And a helluva title, too.

World Shut Your Mouth, Julian Cope.
I loved this song when it first came out, had it on a cassingle (remember those?  Yes, I'm old).  Then I forgot about it for over 20 years.  About a month ago, I was listening to "1st Wave" on my satellite TV and it came on... and I found myself singing along to a song I last remembered hearing before many of the students at Duck U were born.  It's still damn good, too... and I immediately d/l'd it.
Antz Invasion, Adam & The Ants.
I saw Adam Ant live, during his tour for "Vive Le Rock".  In almost all ways, it was the worst concert I've ever attended.  He looked like he was completely blitzed off his arse, the sound mix was way off, just terrible.  And then Marco Pirrone, an unsung guitar god if there ever was one, started with the clicking opening riff of this song, the crowd went dead silent, and it was suddenly like the Adam & The Ants days were back.  It thrilled me then, and whenever those ominous screeching clicks hit my speakers, it thrills me now.

Blitzkrieg Bop, Rob Zombie.
The Librarian is a huge fan of the Ramones.  I'm sure she's cringing right now.  I know she's not fond of this version of the song, but I love it.  It's just so much crunchier than the original; it just feels right.  Grimy.

Let My Love Open The Door, Pete Townshend.
Every now and again, a song stays with you.  Not the way Let It Rock does, but in a pleasant, I've-just-had-a-good-cup-of-hot-chocolate sort of way.  The sort of song that reminds you of better, more simple times.  No pretense of being better than it is but still played by one of the masters of the art at the height of his powers, this is one of those tunes for me.  Strange, since Townshend doesn't really do more than rhythm guitar here; it's the keyboard that leads the way.  That noodling at the very beginning just amazes me even now.

So that's it for me.  Comments?

UPDATE:  Nah, can't let it go with just ten, not when #56 was this:
Perfectly Good Guitar, John Hiatt.
Preach it, Brother John, preach it good...

1 In a series boasting several solid tunes, "No, Thank You!" is hands-down the best of the lot, I agree. Ah, K-On.

That "We No Speak Americano" track is 100% relevant to my tastes. Quirky, upbeat, clever stuff. Thanks for that!

The Godfathers track reminds me of nothing so much as a previously-unknown Clash song. Which ain't an insult, I hasten to point out.

I may have to try this, though I doubt I could find YouTube material for a lot of what might come up on my attempt...

2 What show is that frame grab from? Who is the girl?

4 Google is incorrect.  Her name is Sekine, the bass player for Girls Dead Monster.  At least they got the Angel Beats part right, though.

5 So do you have a favorite GirlDeMo song?

6 I do, Jim.  It's probably no surprise that the very first GirlDeMo tune we hear, Crow Song from ep01, is my favorite.