Goodbye To Getting Anything Done There is a new Civilization being released in the fall of 2010.  It will be fully moddable and for the first time in the series, it will use a hexagon-based map. 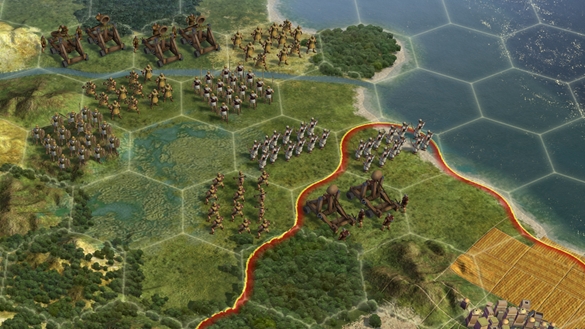 I might need to get a new graphics card.  And a more comfortable computer chair.  And probably a new job after I stop showing up to the Duck U. Bookstore to play this.

1 No, see, what I need to do is install it ON my work computer. Then I can just stop going home. ;p

2 Oh wow, that looks really neat. I haven't touched a Civ game since II (my first real gaming addiction), but this could be the one to bring me back into the fold.

3 I just recently re-installed and started playing Civ III again. I'd been contemplating upgrading to IV, but now I'll have to wait. And yes... there goes every free moment (and some that aren't) in 2010!

4 I've liked many turn-based, empire-building strategy games in the past.  However, one pet peeve of mine is how close those games insist on placing the computer-controlled opponents.  For example, I set up Civ IV with the maximum-sized world, the longest game-time setting, and a single computer opponent; on turn 6 his scouts stopped by to say "Hello".

What I want is the option to have all opponents start far away from each other, giving time to build large empires before running into each other.  If the next Civ game has that, I'll buy it (even if it cuts into my anime-viewing time).  If not, then I'm not interested,

5 Civ AI always cheats. In CivII, for example, their cost of buying new units was a fraction of the player's.

6 In Civ 4, Pete, their costs for production and buying of units was a function of the difficulty level.  Standard difficulty put the other civs at the exact same footing as you.  Top difficulty made it something like 1/10th as expensive for them.

In short, they fixed your problem.

7 I'd gotten it together. My life was on track. I was almost out of the hole. I was catching up.I was finally on my feet.

8 Uh-oh.  My productivity has already been destroyed through 2013 (I'll have to post about that).  This is good - by which I mean bad - for another three months or so.  Now all they need is Railroad Tycoon 4 and another Sim City and I can just give up on ever getting anything done.