GAH!!! The alarm went off at its usual time this morning, and after dragging myself out of bed and doing the usual things one does after one wakes up, I pressed the power button on my computer (Chiyo-chan).  Settling into my computer chair, I watched "I'm booting up" stuff go by on the monitor... until the Windows splash screen popped up, and I saw this: 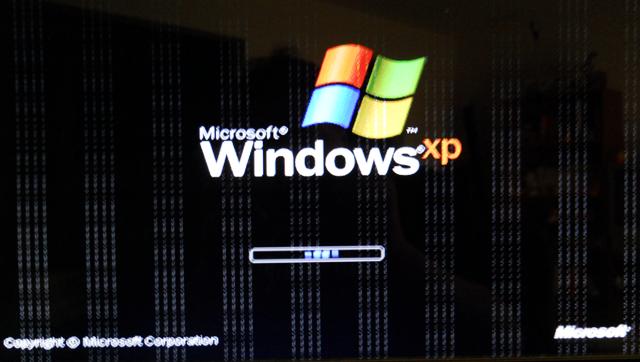 Well, crap.  That's a dead graphics card, sure as god made little green martians.  Obviously, I was going to have to remove that dying card (nearly five years old)... but while I installed the card in the first place, I've never removed a graphics card.  I didn't know what I was going to have to do... just yank it out and plug the monitor into the onboard graphics adapter?  Remove the drivers?  Boil water and tear bedsheets?

Once I got to the Duck U Bookstore, a quick googlesearch turned up diddly.  The question may as well have never been asked before.  So I shot an e-mail to friend GreyDuck, a computer guy of some repute, asking for help (or as I put it, "HALP!!!"), and he responded with flying colors.  A phone call from The Boss's husband also steered me in the right direction... just pull the card out and cross your fingers.

One broken PCIx16 retention clip later, the card was out and I was running on glorious onboard graphics... and I discovered something I had forgotten.  Namely, onboard graphics are crepe on a stick, particularly when mated to a LCD monitor that doesn't run at one of the available resolutions.  I can only just barely run a anime mkv (12 frames a second, maybe?)... which means I need to get a new GPU as soon as I can.

But at least Chiyo-chan works again.  That's the main thing.  So thanks, GreyDuck and Boss's Husband!  Much appreciated, both of you!

UPDATE:  There's this thing that you can do with a computer called "restart."  Perhaps you've heard of it?  It shuts down the computer then gets it running again... including such things like your graphics card drivers that allow you to set the resolution to something that doesn't make your eyes bleed.  It also installs D3DX9, which allows you to actually watch things larger than 1mb in size.  Useful thing, that.  It also means that, unless I suddenly have this burning need to play Fallout 3, I can live without a GPU until I actually have a modicum of funds.  Pity I didn't think about this whole restart thing sooner, my eyes might not have fallen out.

1 AMD on-board graphics have been good for a while (since they bought ATI), but Intel graphics are barely adequate even in the latest 2011 chips.

The good thing (and the reason why I build all my computers with on-board graphics) is that if and when the video card dies, you can at least pull it out and keep on working.

The biggest problem with onboard graphics is that they share the main memory. Graphics uses a lot of memory bandwidth and it gets priority over the CPU, so the CPU spends a lot of time tossing wait states waiting for RAM fetches.

If you had any kind of CPU benchmark, you'd be told that your graphics were worse (of course). But you'd also discover that your CPU has slowed down.

3 Pixy, the nice thing is that Chiyo-chan's onboard graphics is provided by Nvidia.  They actually appear as "Nvidia 6100" in Hardware Manager.  Really, for everyday use it's fine... most users wouldn't have any complaints with it, and to be honest I could probably go a couple of months without needing a GPU; haven't had time for games for a while.

Steven, no question at all.  Fortunately, I've got 3GB of RAM in a XP box and two processors running at 3800MHz.  I'm sure there is slowdown, but I'm not noticing it in my everyday stuff... so far.  Doesn't mean I don't want a standalone card ASAP, though.

One of the things you might be able to bring your old card back to life is to bake it. Yes, remove the heatsink/fan, clean off any thermal paste, remove the retainer clip, prop it up on a cookie sheet with balled up aluminum at the corners of the card (I did it with the GPU facing up, lots of guides seem to recommend with it facing down without explaining why), preheat the oven at 385F, stick the cookie sheet in for 8-10 minutes, take out, let cool, reclean all GPU and heatsink surfaces, reapply thermal grease/paste and put everything back on.

Seriously, I've revived a dead 8800 GTS that way; the theory seems to be is that the solders to some of the RAM or the GPU build up micro-fractures that eventually causes a gap; putting it in the oven this way softens up the soldering and may re-attach the micro-fractures. Granted, only do this if you know what you're doing and if your card is out of warrantee. I also had a new card in my machine at the time too, so I'm now keeping the 8800 GTS as a backup (I did throw the 8800 back in the machine and ran it through a full gamut of graphics tests that it easily passed), but it's probably better than just throwing it away when it still can be useful.

Of course, this is not guaranteed to work; if it's a dead capacitor, GPU, or RAM module, or there's some heavy physical damage to the traces on the board, this will not revive anything. But as long as you keep the temps at 385F and only leave it long enough to soften the solder and not burn the components (less than 10 minutes seems plenty), you really don't have much to lose than an already dead video card.

Here's one link with some of the theory of why this might work.