For Sale, Slightly Used As the DuckMobile is pushing 15 years of age, I've been looking for a replacement.  This involves a lot of head-shaking on my part as I can't really afford anything these days, but occasionally there's a "For Sale" ad that's hard to ignore... to whit: 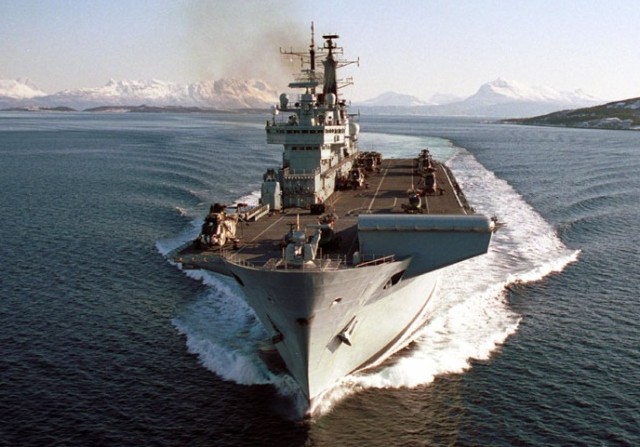 Oh.  Just a bit larger than I was expecting.

That's right, the Royal Navy is flat-out selling one of their "through-deck cruisers."  The ski-jump "harrier carrier" HMS Invincible (R05) saw action in the Falklands against the Argentinians and was involved in the Balkans, Yugoslavia and Iraq.  But Top Gearheads remember her for another reason.
She was decommissioned in 2005 and was on 18-month reactivation notice.  However, her machinery was stripped for parts for her sister ships, the Ark Royal and Illustrious, making that 18-month goal pretty much unobtainable.  Her engines and generators have since been removed, as has all armaments and electronics.  In theory she could be re-engined and turned back into a ship, but according to the RN she is likely to be sold for scrap.

Where?  Why, eDisposals.com, an eBay-like website.  So far no bids have been received, and all offers have to be in by January 5th... but she's listed there as being "in stock." 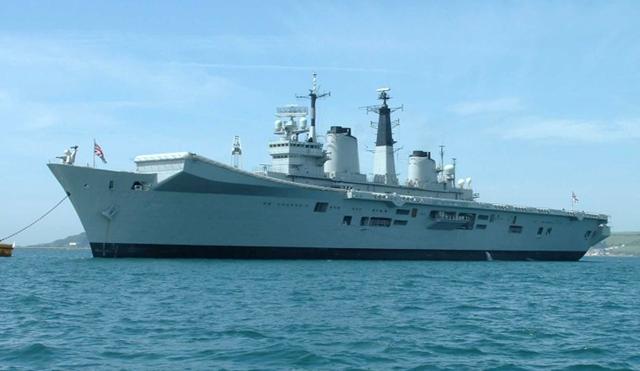 I don't have a garage big enough to park it in.

1 Maybe you could afford it! Newsweek sold for $1, after all.

2 Which was more than it was worth.

3 I don't have any jets that can take off from a jump deck. Fleet carriers only!

It did good service in the Falklands War, indeed. If not for the CAP provided by those Harriers, the Argentine air force would have had a much better time of things. On the other hand, it's arguable that the Invincible was worth more than the entirety of the Falklands; certainly the British nightmare scenario was "Exocet takes out the carrier". (They DID lose the Atlantic Conveyor, their big cargo transport, along with most of the force's transport helicopters on board...)

Don't get me started on our new coalition overlords decision to retired the Ark and the Harriers (the air to air Sea Harriers went ages ago btw, only the RAF's ground attack version was left).

Hopefully there won't be a need for a naval air support until the new carriers (minus aircraft!) arrive later this decade...

5 Are you kidding?  $5 says the electrical system came from Lucas Electrics.


Word of the day: orinthophobia (fear of ducks).

7 Why does that need a name? Is there anyone who doesn't fear ducks?

8 I got $5 that says the UK never launches another carrier.

Why does that need a name? Is there anyone who doesn't fear ducks?

10 Tony, that's good, but I prefer anatidaephobia: the fear that somewhere, somehow, a duck is watching you.
(with thanks to Gary Larson)

11 No bet, Steven. (At least if we're talking about jet carriers. Wouldn't be surprised if they built a heli "carrier"...)

12 I'll take that bet Steven, though the only reason we're getting at least one is because it was cheaper to build than cancel the contracts (which I still can't quite get my head round)

13 Andy, IANAL, but I have seem some contracts which contain rather harsh cancellation clauses.  If you're ordering something that the other guy will need spend a lot of upfront money to produce (build a factory, construct custom tooling, pre-order unique parts, etc.), then they want assurances that they won't get screwed if you change your mind.

If you have a prior reputation for canceling big orders (like say, Britain's MoD), then you may need to really pad the cancellation clauses to get them to bid on the contract.  Afterall, they are not bidding on other projects because they anticipate being busy with your work.