Bad Day In Duckford (THIRD UPDATE) So, the day started out with a severe thunderstorm here in Duckford.  Well, sure, you have to expect that here in the Midwest at this time of year, right?  Not like this.  I made it about halfway to work before I came to a length of road between two hills... which had flooded high enough to be above the tires of cars stupid enough to give it a shot.

In 15 minutes.  On one of the city's major streets.

Hm.  This is different.  So, I turn around, backtrack and cross to another street, called Mulford Road.  On the way to Mulford, a lighting strike occurs about two blocks ahead of me, hitting a streetlight and blowing a transformer right in front of my eyes.  Flash.  Bang.  Poof!  Eventually, I make it to the parking lot at Duck U., break out my trusty umbrella (none of this "water off a duck's back" for me!), and hurry to the main entry for the building the Bookstore is in.

A maintainance guy is there, waving people around to the back entry.  Seemed the front way is flooded, with water in the building.  I still manage to open the store on time.

A half hour later, the power goes out, and stays out.  Fer the luvva...

After closing the store and kibitzing in the dark with some of the Duck U. staff, I drive home on Mulford.  Fast-forward to 7pm.  A third severe thunderstorm comes through, and dumps four inches of rain in just over an hour on us.

Around 830pm, I'm working on the previous post, when the power goes out.  Lost it all, but I wasn't surprised by the power outage.  Enough storms around here today, after all. 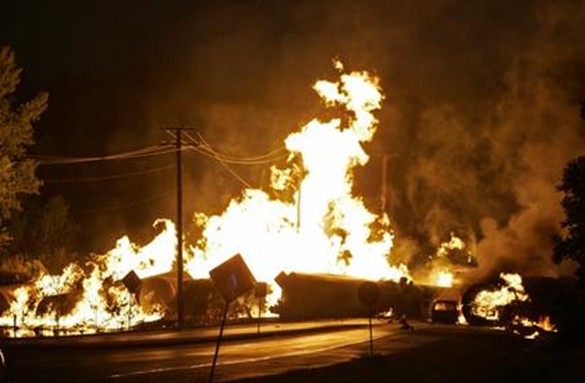 (photo courtesy of rrstar.com)
A Canadian National train, pulling 70-some-odd tanker cars and 40 other cars derailed at a road crossing.  Twelve tanker cars carrying ethanol had tumbled and exploded, sending a fireball some 300 feet into the air.  This picture was taken from the front lawn of a house, part of a 500-home residental neighborhood.  Everybody within a half-mile of the crash site has been evacuated.  Three casualties, people in cars waiting for the train to pass, have been reported, all with serious burns.  One has been flown to a hospital in Chicago that's better equipped to deal with extensive burns.

Oh, that street?  That's Mulford.  I crossed those very tracks twice today.  In fact, the site of the accident is only a mile or so from Pond Central, and I can see the fire's glow from my parking lot easily, and the smoke plume from the stairwell up to the third floor.

The cause of the derailment is currently unknown, seeing how there's a huge fire burning on top of the accident site.  However, those particular tracks sit at the bottom of two gentle rises, and I've often seen water pooling there after decent rains.  Four inches of rain, an hour before the train got there, is not just "decent."  I'm guessing there was quite a lake there, or the rain had done serious harm to the roadbed nearby.

The authorities are letting it burn out, saying it should be done by tomorrow sometime... if the other 60 ethanol-laden cars don't ignite, that is.  Fortunately, the engines on the train didn't derail, so they've already pulled many of the cars away.

A bad day in Duckford.

UPDATE @ 930am, June 20th:  The fire is still burning, though its down to just two or three cars now.  There's one confirmed fatality, but the cause of death is as yet undetermined because the body is too close to the fire.  Authorities seem to confirm the washout theory; reports from witnesses said that the train cars were actually bouncing up and down on the tracks just before the derailment.

SECOND UPDATE @ 11am, June 20th:  Bringing you they type of hard-hitting eyewitness coverage that you can only expect from The Pond, I took a drive past the accident site, in the guise of going grocery shopping.  Cleverly going to a different grocery store than I usually do, I managed to drive around all four sides of the blocked-off area.  Despite it being a lovely clear day here in Duckford, there's no visible evidence that anything occurred, even though I knew exactly where it happened.  The smoke plume is gone, and other than police cars barricading Mulford, and news trucks sitting in a church parking lot and a few camera crews shooting footage of... well, nothing, there's nothing to indicate that there's a major fire going on.  Lemme put it to you this way: on a day like today, I can easily see the steam clouds rising from the cooling towers of the nuclear plant that's about 30 miles away, so if there was any smoke, I should have seen it.  When I drove downwind of the accident site, about 3/4th of a mile, there was nothing I could smell to make me say "aha, there's something weird going on."  Of course, there were a lot of trees and hills blocking direct line of sight to the location, so I couldn't actually see the incident.  More when more is available. 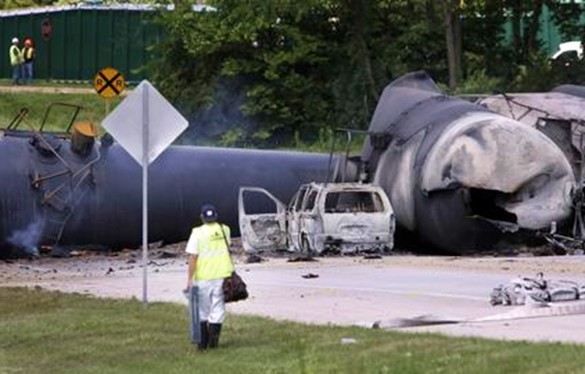 Authorities say that there's still two tanker cars on fire. By some miracle and the heavy rain yesterday, the fire didn't spread to the nearby residences.  Some of the evacuees have been allowed to return to their homes.  The toll is one dead, nine injured.

1 Wow! A lot of crazy activity out there in Duckford! Glad you managed to make it out okay! We have been having crazy weather, too. One thing about ducks and floods.....if your place floods, you will be able to find your ducks. They will float up

2 It's not every day that national news happens in your backyard. Glad to hear you're okay.

3 I am apparently TOTALLY oblivious to my surroundings, OR I am living in an alternate reality, which is highly likely.

OR I am living in an alternate reality, which is highly likely.

Look around. If you and all the women have bare midriffs and the guys have scars and/or goatees then yes you definitely are. However there are, in theory, infinite realities and so there are subtler clues, the presence of large numbers of zeppelins being high on that list.

I hope this helps.

OMG!  When I heard that story on the news, I hoped it wasn't close to where you are.  Just glad it wasn't any closer!

I followed the link to the newspaper.  Great "everyday hero" story here.