A Curiously Interesting Form of Frustration Of late, I've found myself spending time playing a MMO game called War Thunder.  For those who aren't aware of the game, War Thunder is primarily a WWII-era air combat (mostly)sim.  I say "(mostly)sim", because there are three different difficulty levels you can play.  The first is Arcade, where it's nearly impossible to make your plane do Bad Things, like spin or rip your wings off.  Flight models are roughly correct, but relaxed, and there's aiming assistance as well.  The second level is Realistic.  It's difficult to get into a spin, but possible.  You can dismember your airplane, and G-forces can knock your pilot out, though I've never managed that feat.  Damage is modeled in more detail as well... you can ruin a rudder, instead of just doing "tail damage", for example.  Finally, there's Simulator, the highest level possible.  I've never dared climb that mountain, mostly because I don't want to pull my flight stick out of storage. 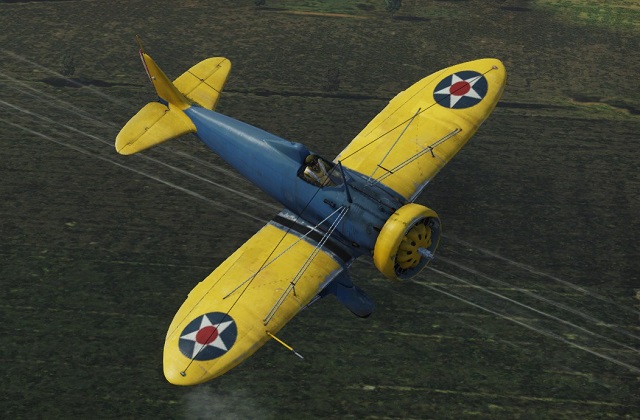 Everybody starts off with the very wimpiest airplanes, Spanish Civil War-era biplanes or early monoplanes like the P-26 above.  Then, as you fly more, you earn research points to unlock more advanced aircraft.  At the same time, you also research improvements to your current aircraft, like better engine tuning or replacement of worn equipment... that way, your old plane gets better as you get ready for the next generation.

For example, the direct replacement of the Peashooter is the P-36 Hawk, which is replaced in turn by the P-40.  Which is not to say that Americans are the only planes available!  Five nations are currently available: USA, Japan, Germany (with Italy, which are about to be spun off), England and the Soviet Union.  All the legendary planes are able to be earned, from Gladiators to Me262s to some of the "paper airplanes" Japan had on the designer's table when the war ended. 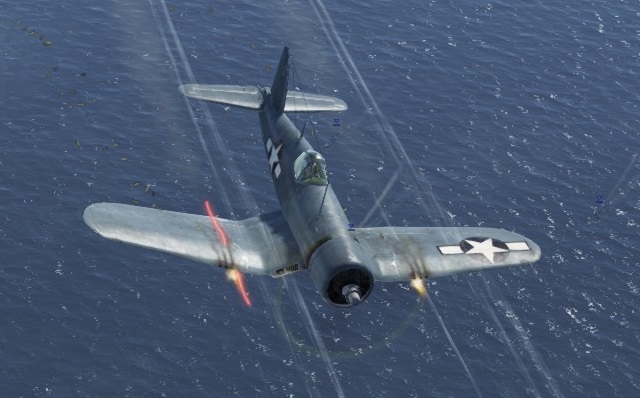 Combat balancing is done on a tier system, roughly based on generational levels.  The P-36, for example, is a Tier I plane, where the P-40 is a Tier II.  The A6M2 Zero is also a Tier II aircraft, as is the Hellcat.  Of course, the Spitfire is anything from a Tier II to a Tier IV, depending on the version you're looking at.  Tier V is where you find the jets... we won't be talking about those!  In any battle, you can see planes within one tier of you... so if you've got a Hellcat, you could be up against A5M4 Claudes or later versions of the Me109s 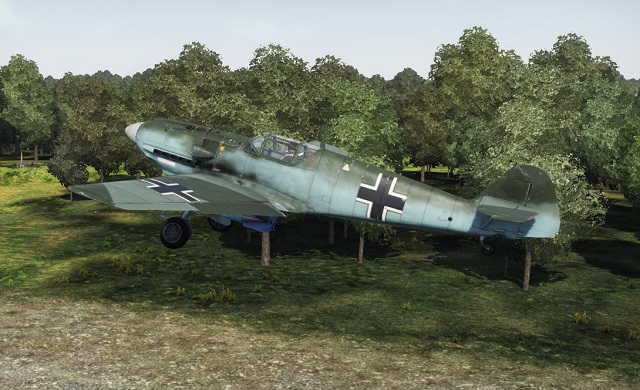 Speak of the devil...

Fighters are not the only planes in the game, either!  Bombers and seaplanes are also available to fly, and there's nothing sadder than seeing a Zero do unspeakable things to a Swordfish.  So I won't show you that!  Here's a Dauntless instead: 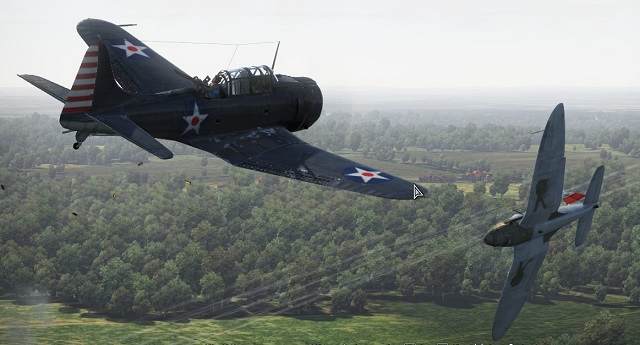 You'll have 20 players or more in an Arcade battle, evenly divided with little regard to nationalities.  It's not uncommon to see Buffaloes being menaced by Wildcats, or Me110s under attack from 109s, for example.  In Realistic, though, it's nationality-based.  If you're in a P-38 Lightning, you won't be dogfighting a Corsair... not that you'd want to in any case.  The flight models would make that a fool's game, and one that'd be short and unhappy for the P-38. 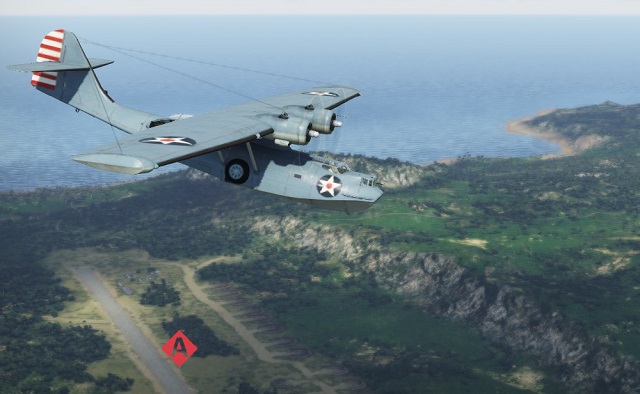 War Thunder is free-to-play, and the cynic in me wants to add "pay-to-win".  That's not strictly true, however.  Everything a pay player can get is available to the free player as well, it'll just take a lot more time spent grinding away at the tech tree.  One thing that amazes me is just how stunning the game looks. 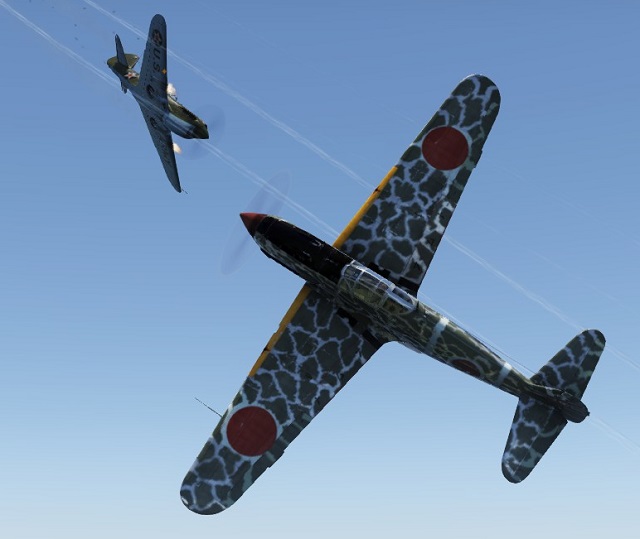 While all the pictures in this post are from the in-game replay system, quality doesn't drop when you look at gameplay screenshots.  It really does look this good all the time.  So why don't I just freakin' love War Thunder?


There are a few reasons.  First off, the gun damage models are completely screwed up.  For example, you would expect a 7.7mm (or .303, if you prefer) machine gun round to do less damage than a .50cal bullet.  That makes sense, right?  Right.  In War Thunder, however, the 7.7mm does practically nothing at all in the way of damage.  If the game had its way, the Brits would have lost the Battle of Britain because the Hurricane and its eight .303cal mgs couldn't shoot anything down.  In a comment thread somewhere, I described being attacked by my Hurricane as being shot at by a Pink Floyd concert: lots of lights and sound, but little actual damage.  Flying the Claude, I've emptied multiple reloads worth of twin 7.7mm mgs into OS2U Kingfisher floatplanes with no apparent effect except on my bloodpressure.  And it's not just me, this is a huge complaint with the War Thunder community as a whole. 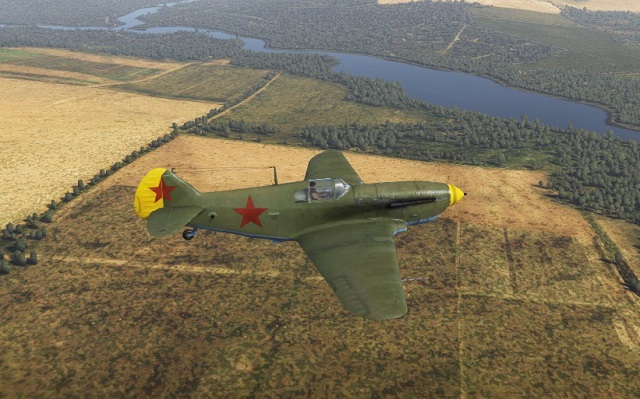 The other more-or-less universal complaint is that the Soviet planes are, on the whole, overpowered.  Early MiGs and LaGGs were, historically, unlikely to survive an encounter with a ME109.  It wasn't until the late war period that their fighters could legitimately be considered on par with the rest of the combatant's aircraft.  Amongst War Thunder players though, it's common to refer to Soviet planes being made out of Stalinwood, impervious to harm while dealing damage well out of proportion with what they should be capable of.  Perhaps this Soviet bias is unsurprising; the game is from Gaijin Entertainment, a Russian company (note: this is not just a Russian problem; American developers tend to lean towards making US fighters overpowered, and so on and so forth).  I can personally say I've had great success with the Soviet planes, and substantially less with planes from other countries, despite flying the Soviets the least of all.  There are balancing issues to be had in other parts of the game as well. 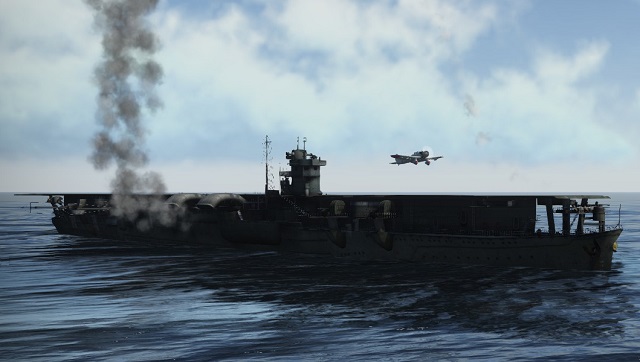 It's those balancing issues that threaten to kill the game before it gets to full release status (War Thunder is technically in Beta, though I have a hard time accepting that designation).  This is a game that is seemingly made for me.  I should love the thing to death: WWII air combat with a whole wide range of Japanese fighters and obscure planes from other countries (look, it's the XP-55 Assender!)?  Carve me off a hunk of that with extra gravy, please!  Instead you have a game that's deeply frustrating.  Look, let me explain by example.  Earlier today, I was in a Realistic battle, flying a F2A-3 Buffalo, of all things.  As this was nominally in Korea, the opponents were Soviet low-tier planes.  I took off, flew for seven minutes to reach the battlefield, and was shot down in one shot from a LaGG-3 over 8000 feet away.  I had literally just seen him when he put a cannon round in my cockpit.  Game over.  Such FUN!  The price (free!) is right, but there are moments where all I want to do is punch myself in the face for wasting time on it. 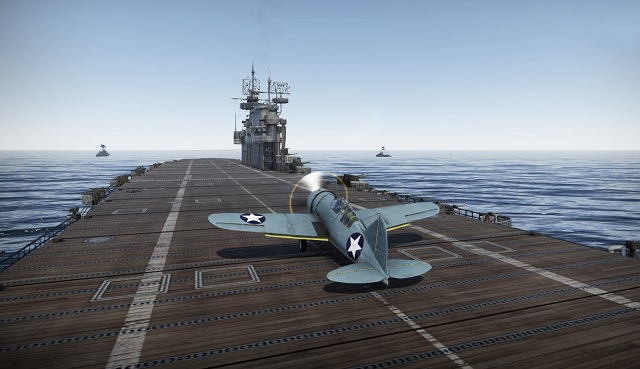 But then you manage to shoot down a Zero with a Buffalo, and the victory glow keeps you going.

If you're interested in playing, let me know and I'll send you an invite... that way, we all get free shinies!  If you're already playing, tell me and we can try to fly together some time.  If there's enough of us, maybe form a squadron of pilots from The Pond.

EDIT: If you're looking to play, please sign up using the following link: http://warthunder.com/en/registration?r=userinvite_25415322  Thanks!

On the eastern front, there were a fair number of German fighter pilots with upwards of 200 victories against Soviet planes. The only reason that was possible was that at that stage in the war the Soviet planes were completely outclassed by the Messerschmidts the Germans were flying.

Eric Hartmann is credited with 345 Soviet kills. His flying skill alone can't possibly be responsible for all that; it must be that the planes he was hunting were dreadful.

2 ...it must be that the planes he was hunting were dreadful.

I-15s and I-16s, mostly... both of which are the strongest of the early war Tier I planes in War Thunder.

3 We've come a long way from Aces of the Pacific/Europe.

I think  my old FCS Thrustmaster and throttle is in the attic if you want it.

4 Giving it a try.  I haven't played any kind of realistic flight sim in over 20 years.  Things aren't going well so far.

Which Tier is the Dauntless?

The Dauntless was a very underestimated aircraft. Even though it was a bomber, Dauntless pilots shot down Japanese fighters on occasion with their forward guns, which is pretty amazing for a plane with 3 crew.

And, of course, if it needed to escape there wasn't much that could keep up with it in a dive without self-destructing. (Dive brakes FTW!) Certainly the Zero couldn't.

6 It's the second level Tier I light bomber for the Americans, coming after the OS2U Kingfisher, and in the hands of a good pilot it can try to hang with the fighters.  Certainly against a Val or Stuka it'll outfight 'em.  However, it's not powerful enough, game-wise, to be a Tier II or above.  It doesn't carry a big enough bombload, isn't fast, and isn't heavily armed with (for example) anti-tank cannon.

In GAME TERMS, it's a low-level plane.  As we know, though, stats aren't everything.

One correction: the Dauntless only had a crew of two.  You're maybe thinking of the Avenger, perhaps?

Are the tiers supposed to be planes which are competitive with one another, or planes which were contemporary?

You say the Hellcat is tier II, so presumably the Wildcat is tier I. Which puts it in the same tier, presumably, as the Buffalo -- which would be a sad matchup.

I assume that the P-40 is also tier I. That's another underestimated plane. New Zealand pilots flying it from Henderson Field were amazingly successful. (It was a plane which benefitted especially from pilot familiarity, and the NZ pilots had been flying them for years.)

8 Nope, the P-40 is Tier II.  Tiers are roughly contemporary because that also roughly corresponds with fighting ability.  The Wildcat is a Tier II plane as well.

9 Most of my experience has been with the competing product out of Belarus. The "World of XXXX" series started with tanks first, then moved to aircraft. I'm almost 9 tiers deep in to World of Tanks, and I was in the closed beta for World of Warplanes. I never felt like they got the flight controls quite right, and I quit after about 4 tiers. A tenth to quarter second of latency doesn't matter much in a tank, but it drove me nuts missing quick snaps shots at aircraft speeds. I've been waiting to hear about the beta for World of Warships opening up. I'm hoping it's awesome.

10 Will!  Haven't seen you around in a while, welcome back.  I'm fortunate that my ping rate is always below 100, and is usually in the mid-50s.  Practically no lag.

I've not ventured into the tank side of Wart Hunder other than the basic tutorial.  All the video I've seen of the gameplay makes it clear that my heart couldn't take the strain of the cat-and-mouse.

11 Woohoo! Nobody expects a PBY over a European battlefield! (kinda fun, bombing the poor AA posts...)

Man, I have no idea what I'm doing up there.