Winter 2021: Don't Tell Me It's Awful! There's always somebody out there.  "There's nothing to watch," they'd moan and kvetch.  "It was better before this."  Any maybe those people are correct.  But not this anime season, they aren't.  Here's a look at what I think is a remarkable Winter! 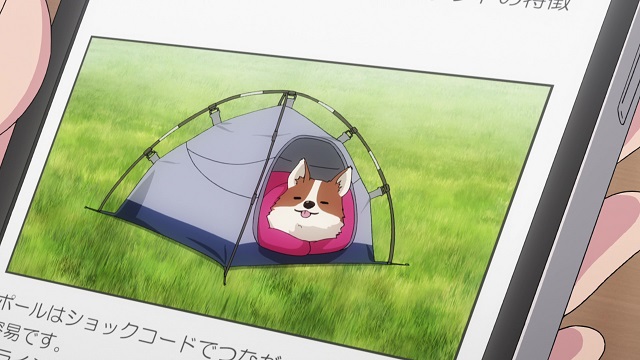 It's a winter of their discount tents...
Yuru Camp Season 2
Back in Winter of 2018, the comfiest camping series ever hit the cables with a... well, not with a bang but with a contented sigh and a snuggle into a fluffy blanket. Ever since I, along with many others, have been waiting for a true sequel.  A collection of 5 minute shorts a while ago did nothing to assuage that desire.  And now, finally, our well-padded and warm selves have gotten our wish. 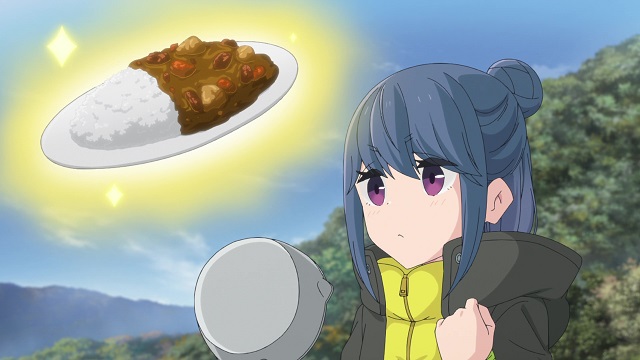 There's basically nothing new under the sun here.  It's the same old bunch of characters, doing the same old outdoors-based shenanigans.  If you were a fan of Yuru Camp back then, you're going to love it this time around.  If you didn't like it back then, what the hell is wrong with you you're probably not going to like it now.  Yes, it's yet another cute girls doing cute things slice of life series, but it's really really good at what it does. 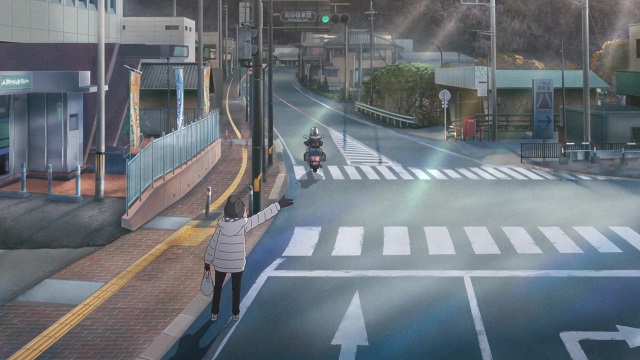 And it usually really, really pretty, too... even when they forget to clean up the google logo.
So I'm A Spider, So What?
Random high-school student dies, usually to a random truck, and ends up in a fantasy world where either they're stupidly overpowered or know absolutely nothing.  We've seen it so many times in less than a decade that's it gotten stupidly boring.  It takes something special to stand out. 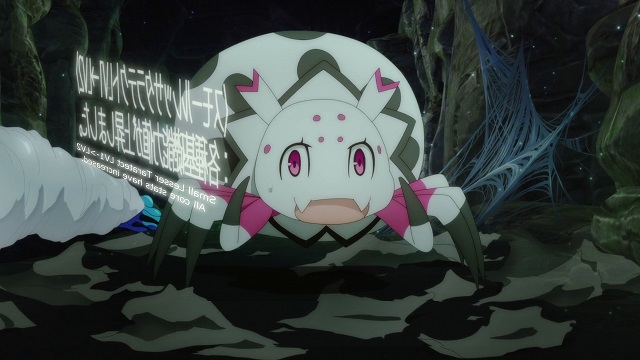 Like being a spider.  Whoops.  Not a giant spider, but a freshly hatched spider with no talents other than being a spider.  With a human mind.  And Yuuki Aoi as your voice actor.  And that makes all the difference in the world.  As expressive as a spider face when the CG is pretty okay, it still doesn't work well to carry a show... but her voice sure as hell can.  This wouldn't be anywhere near as entertaining to watch if someone else was doing the voice.  Basically it's a Yuuki Aoi highlight reel disguised as an anime about an isekai'd spider.  And I'm a-okay with that. 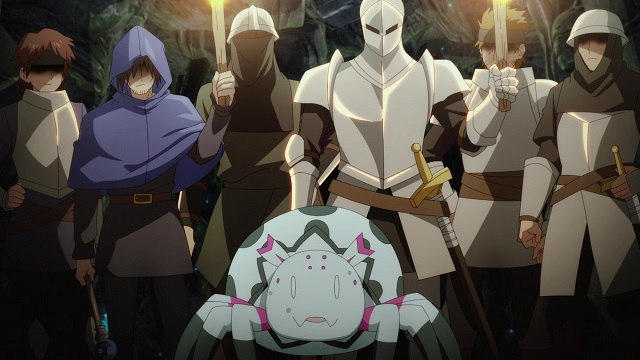 There is another storyline involving the rest of Our Spider's high school class being isekai'd at the same time... REALLY BIG TRUCK-KUN... and nobody seeming to care about it.  Oddly, the anime introduced this storyline in Ep01, where the manga didn't even hint at it until the very end of Volume 4.  I'm not sure if it was a good decision or not, but I don't really care: Yuuki uber alles.
Heaven's Design Team
In the beginning, He made the heavens and the earth, and the waters and the skies, and the animals upon them all.  Until He got bored making animals and moved on to bigger and better things, like fjords.  Instead, he hired consultants to do the animal bits for Him.  This is their story. 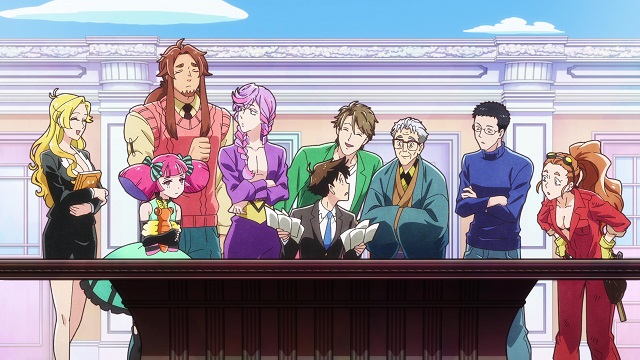 This is the design team.  Our main character is the one that's sitting down. He's the new transfer from Upstairs, brought in to ease communications between the Client and the designers.  Because, like all clients, He is often a little vague on his requests.  "I want a flying animal" is all well and good, but could you narrow it down a little bit?  So the designers get to work... 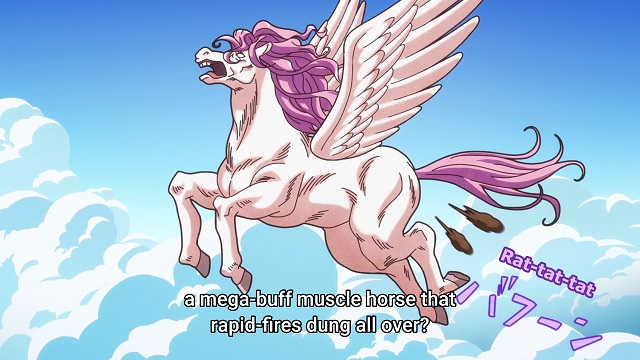 ...and that's where the humor comes in.  They make perfectly rational suggestions, come up with perfectly normal designs... which invariably fail catastrophically.  Like the pegasus up there; that's the final (rejected) version.  It would need a huge amount of muscle to flap those wings, and that means a LOT of food, and THAT in turn means a lot of... yeah.  The show goes through a lot of trouble to show why and how we got animals that do what they do. Sometimes logically, like poopasus up there, sometimes in ways that seem insane but make sense in the end... the most fearsome animal one of the designers comes up with is the koala, but the way all the pieces get constructed sure as heck makes it SEEM like the ultimate monster. 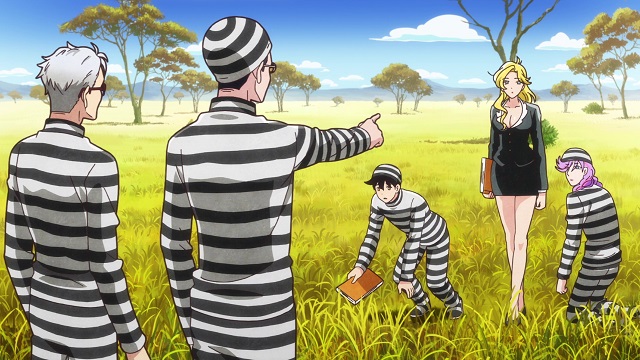 The above testing leads to the giant panda.  Yes, really.  This is the first series in YEARS to actually make me consistently laugh out loud every episode.  Not the sort of laugh that's really a smile, or a chuckle, or even a sharp exhale of air from the nose... an actual full-blown bit of laughter.  When I'm watching it alone, in the dark, late at night. As a result, I cannot recommend it highly enough.  I had no idea what to expect when I went into it, but holy crap has my tiny gamble paid off big-time.
Horimiya
This season's winner of the kinda coveted, kinda dreaded "series I like too much to watch" award.  Let me explain. 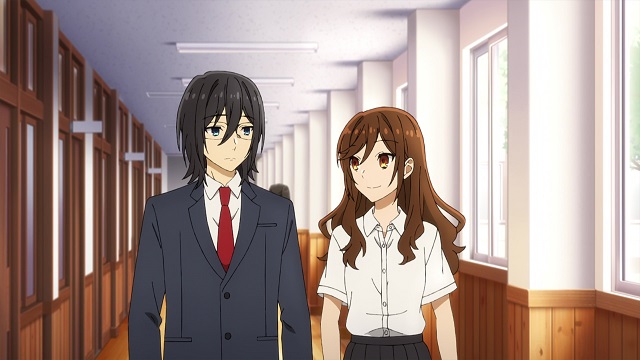 I like these characters.  I like spending time with them.  I want things to turn out well for them.  I have no reason to think it won't.  They're both good kids, though each harbors a dark secret from the rest of their school.  To whit: 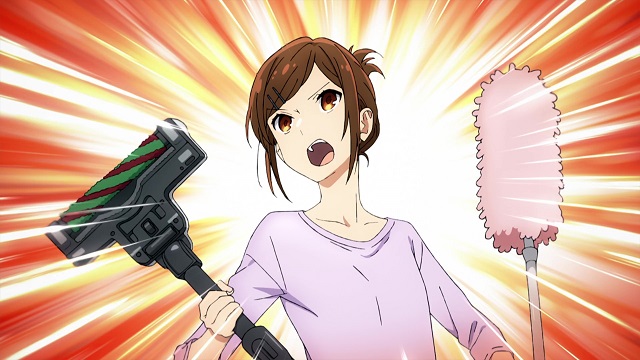 Hori's a shlub at home, and by that I mean she does all the cooking and cleaning and acts as a substitute mother for her much younger brother, because Mom works a lot of long hours and overtime to make ends meet.  She's totally fine with doing all of it, too, honestly enjoying herself from all appearances. 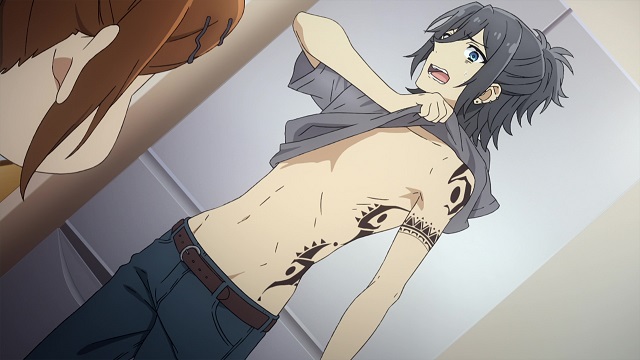 Miyamura on the other hand, is the exact opposite.  At school, he's the quiet gloomy guy in glasses that keeps to himself and everybody suspects is a kinda creepy otaku.  Outside of school, he's got nine piercings and multiple tattoos for reasons not entirely explained as of yet through what I've managed to watch.  He did at least some of the piercings himself though, which doesn't bode all that well as for "why". 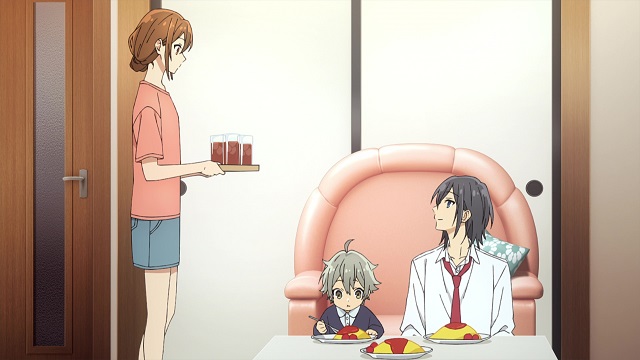 It's not just them, of course.  There's all their classmates as well, and how they're all interacting with the newly coming-out-of-his-shell Miyamura and just daily life is proving to be just as interesting.  I suppose it's standard rom-com fare, sure, but it's being done better than most.  Let me put it this way: the last series to get the "I like it too much to watch" award in my head was Rascal Does Not Dream of Bunny-Girl Sempai.  That's a pretty lofty target, and I really want the series to hit it. 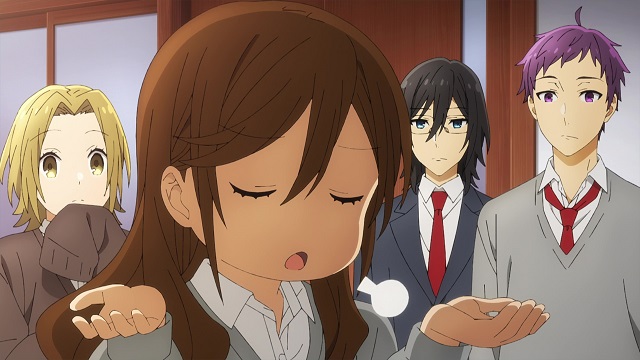 I'll be awfully disappointed if it doesn't.
So that's what I'm watching this season.  Probably totally predictable, but hey, that's me in a nutshell.

1 My soul needed more Yuru Camp, and Horimiya is the show I didn't expect to love but damn do I love it a whole lot. I think what's surprises me most is the relationship between Miyamura and Toru, who are presented as rivals but immediately (also) become good friends (in an off-kilter way).
Vyx bought the first three manga just before the series started, so I knew most of what was going on up to the previous episode, but the latest ep is new material for me. I definitely want to read more because there's a lot of little text gags and inner thoughts stuff that the anime glosses over (though its presentation of emotional states is often rather clever; I like the "colored cut-out" motif) but I don't feel like the anime's lacking in any way. It's faithful (if a bit out-of-sequence, in ways that make sense for the adaptation) but on par with its source material at this point.

We're also sticking with Yashahime out of pure stubbornness (oh yeah, now I remember why I never fell in love with Inuyasha in the first place), and I'm catching up on Adachi & Shimamura (which is a firmly cute-but-not-spectacular little yuri-fest).

2 Adachi & Shimamura is a wonderful little series, that I discovered via the light novels.  Shame about the spacegirl though...

3 Mushoku Tensei is quite good. They used their massive budget well.

4 Hey, fellow Pond Scum, I bring news from Wonderduck. He has been suffering from pain in his thigh, and it finally reached a point that he needed to get it checked out. He's in the hospital overnight; official diagnosis: Blood Clot. Scary as that is, his communication to me indicated the doctor saw it as imminently treatable and not necessitating any emergency procedures or concerns.

So, keep him in your thoughts; and he should be back with us soon.

5 Wonderduck, good luck and prayers for a speedy and complete recovery.

6 WD, good luck and hopes for a quick and easy recovery.

7 Get well soon!
Pond Scum gets stagnant without a Duck to stir it up...

9 Gah, nobody told me. Get better!

12 Get well soon, Wonderduck! It's cold again, so you're not missing anything at the moment. There's supposed to be another warm spell in the next few days, so hopefully you'll be out of the hospital in time to bask a little.

13 It could be worse. They'll put him on blood thinners like my father and he'll be okay. Still, it's a bit too soon. Wonderduck and I are about the same age. Glad it wasn't a clot in a coronary.

14 Get better soon, Wonderduck.  The pond isn't the same without you.

15 I hope that you have a safe and speedy recovery, Wonderduck.  I've enjoyed reading your blog over the years, and I hope that you'll continue with it again, once you have more fully recovered.

He is still in hospital. He still has a blood clot, and the blood thinners are still working away. He has added "kidney stone" to his hospital experience, and will hopefully have it removed on Tuesday, the old-fashioned way. It can't be lasered because of the blood thinners.

So, keep him in your thoughts, and he expresses his appreciation for the messages he has received here and elsewhere.

17 Is anyone able to smuggle him a laptop with his current watchlist on it?

I know he has family that have access to his apartment in an emergency, but I don't think anyone that could do such a thing locally, ATM. I will check on the feasibility. If the kidney stone is successfully removed, then he is already scheduled for a short stay with a live-in PT facility before returning home.

20 Hi Wonderduck,
A little something that I think you might enjoy when you get released.  It's a series of images following the adventures of a bunch of young nuns and the flock of ducks (and other animals) that live with them.  They're released on Twitter, but this image site has collected them all into a Pool of images.  This isn't the first image in the series as the ducks don't get introduced until a few images in.  Link is to the SFW version of the site:  Pool: Original - Little Nuns (Diva)

After a handful of misadventures and paperwork snafus, Wonderduck is finally in the physical therapy facility. I gather it is not impressive, and may in fact be barely livable. But he is out of the hospital and will hopefully be back in hurdle-jumpingobserving condition in no time, or at least a week or two.

22 Thank you, Ben!
Get well soon, Wonderduck! Physical therapy is indeed a pain in the everything, but it's better than being flat on your back and stuck there.

23 Thank you Ben!  Good luck with the physical therapy Wonderduck!  I doubt it will be fun be we want you back and healthy.

25 A one-month anniversary get-well-soon message on April Fools' Day? I guess that's how it is. No fooling, though; get well soon, your Duckness!

26 Wonderduck! Get Well SOON! Another season is here, and I need my duckfix!