Flying Witch: The Review Simple, short review:  Do you want to be happy?  Then watch Flying Witch.  It'll do the trick in no time flat. 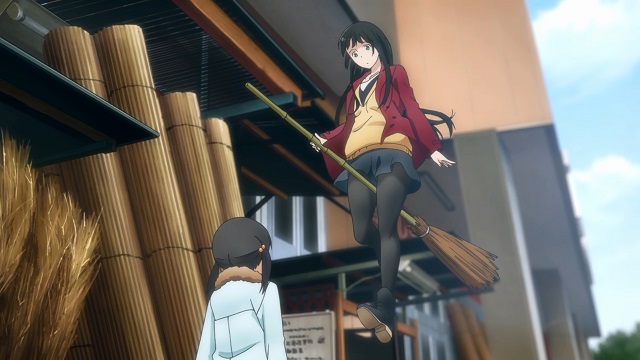 Oh, you want more detail?  Okay!
In this world, magical beings are a little uncommon but known of by the general public.  They don't announce themselves as a rule, but it's not like they'd be persecuted if they did.  It's just... easier, I suppose.  Our main character Makoto is a trainee witch.  Well, that's not quite accurate: she's recently turned 15, and according to the traditional ways of witching world, she has come of age and is supposed to be out on her own.  Her parents, progressive in the magical community, instead send her off from their home in Yokohama to the city of Hirosaki near Aomori to live with family until she graduates high school, since being a witch "isn't exactly reliable these days."  While she's there, she'll get to learn magic better.  Hijinks ensue. 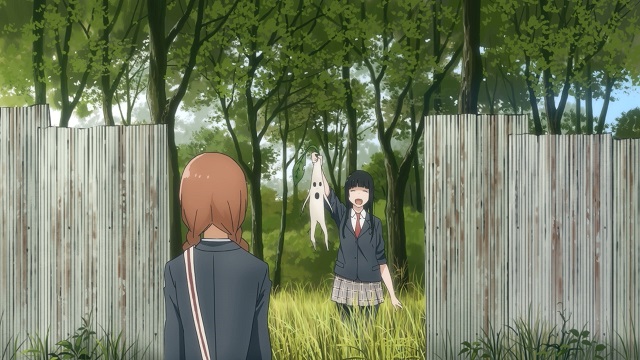 Except they don't, not really.  Oh yes, it's that kind of show.  If you think ARIA, but without all those pesky rowboats flitting about, you've got the idea of the sort of pace Flying Witch brings to the table.  People do things, stuff happens, the odd semi-deity shows up, lets go get a donut.  Makoto is just a little bit off from the "real world", not enough to be annoying,just... well, she's a witch and people are people and the two don't quite align perfectly.  Don't worry too much about it, have some tea and admire the scenery. 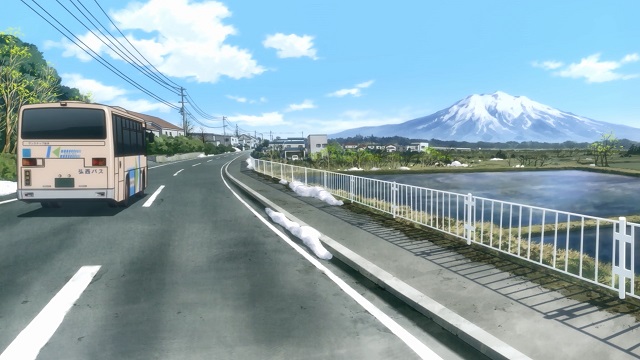 In many ways, the city of Hirosaki and the surrounding area is a quiet member of the show's cast.  It's the sort of place you can probably only find in certain locations in the world: it's an urban center of about 175,000 (which is roughly the same size as Duckford), but with a density of about 340 people per square km.  Duckford's population density, by comparison, is nearly 900/km2.  As such, Hirosaki is very much a city where if you go this way, you're heading into the city center and everything is compressed and... well, city-like.  If you go that way, though, things get more and more rural until you aren't really in a city at all anymore.  Go a little bit farther and you're in the woods. 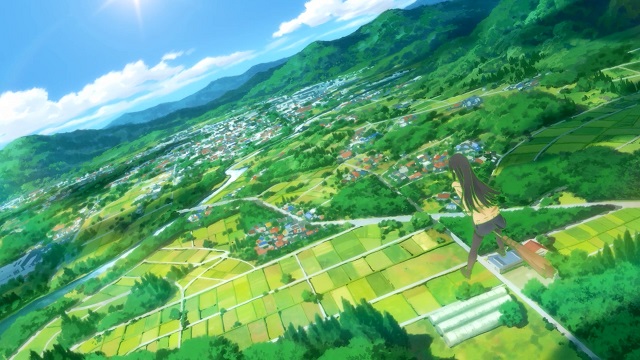 Image is from the OP, but it shows what I mean perfectly.  What all this means is that the series has the ability to position itself in any sort of scenery it needs at any time, and to look good doing it.  Believe me when I say that it takes advantage of this every single episode.
So.  We know Flying Witch looks nice, but a show like this doesn't work unless the characters and their interactions are outstanding.  Does it measure up?
more...

1 That sounds like a good show. I love when shows DON'T shoehorn in a bunch of unnecessary interpersonal drama, especially when the characters are supposed to know one another well. Can you imagine a sitcom where a husband and wife actually communicate with each other instead of constantly deceiving each other over the tiniest things? Yeah, me neither.
Will's been slowly introducing me to anime; I really liked Shingu: Secret of the Stellar Wars (so much so that I actually wrote a tiny one-shot ficlet for it (but refused to let Will read it bc I was embarrassed)), Sword Art Online, and Banner/Crest of the Stars. I also liked Haibane Renmei. But I did not like Gurren Lagann...

2 OK, see when I was first taking a run at it, Flying Witch struck me as going to go in the ditzy-for-comedy-value thing full-force and it didn't make me want to continue.

Huh. Well, it's not like I'm really watching anything else at the moment...

3 I'll bite. I haven't found anything else the past year that I finished.

Mrs. Will: those are some fine choices.  It's a shame we're likely to ever see the end of the Crest/Banner story.  I have to admit I've never been able to figure out the target audience for Gurren Lagann.  I've heard it gets quite absurd at the end, but I've never been able to make it that far.  And that despite the show creating one of the most iconic character designs in anime/manga history.

5 From your little review here, it seems the obvious comparison would be to Someday's Dreamers.  Did you ever watch that series, and if so, how would you compare the two?

6 I've watched this twice since it came out and enjoyed it well enough for a third. (Though it'll have to wait for the end of this Amanchu rewatch...)

7 David, I did watch Someday's Dreamers.  They might seem superficially similar, but really there's not much of a comparison between the two.  I'm also of the opinion that Flying Witch is a much better series... in that I really, really enjoyed FW, and the same could not be said for SD.  Oh, I didn't object to the older series or anything like that, it just isn't as good.

8 Yeah, I really loved it when it first came out. I think I wrote about it, but never posted any screenshots. Inukai was cute for a Furry, and you know me and white-haired tan girls....

But if I had to choose one word to describe Flying Witch it would be "Pleasant."

9 The Curse of Wonderduck's Taste is in full force here, unfortunately: I really didn't care for Flying Witch, but I loved Someday's Dreamers, especially the part of Angela. It was a stronger production in every conceivable respect, even in voice acting. Every time Kei opened his mouth, it was a torture. I lasted just long enough to see if Inukai would rescue that wreck, but of course it was a faint hope from the beginning. They could not even draw her in a convincing manner.

Regarding "a sitcom where a husband and wife actually communicate with each other", Danna ga Nani wo Itteru ka Wakaranai Ken is most excellent exactly because of that.

My views on Gurren-Lagann evolved over time. When I saw it initially, I didn't care for the post-timeskip part. But these days, it's all I rewatch. It reaches deep into the realm of Seven Samurai, Bridge over the River Kvai, Twelve O'Clock High. I think I only saw something like that in MS 08th Team in anime previously. But in the same time the sheer power of the post-timeskip destroyed the simple fun of the Simon The Digger growing up etc.