Duck U. Anime Club Rides Again! Well, who woulda thunk it?  On February 1st, the two-years-dead Duck U. Anime Club is going to rise from the ashes and give it another go.  The difference this time is that this one is almost exclusively student-driven, which is really exciting to me.

Last time around, I started the DUAC so I could have some people to watch anime with.  I did the recruiting, the posters, the viewing-rights-obtaining from the anime companies (ADV good, Bandai very very bad), the scheduling, the room reservations, and act as Advisor to the club, and enough people showed up to make it worthwhile.  The only thing I didn't do was decide where the budget was going to go... though I still had to sign off on every purchase (i.e., pizza and beverages for the club meetings).  It was fun, but I wasn't particularly unhappy to see it fade away; it was a lot of effort for not a whole bunch of reward (though the plaque from the club proclaiming me to be 'the best advisor a club could have' was pretty nice).

This time, though, two students independently came to me about getting the band back together, and while I was happy that there was interest there, I wanted it to be clear that I would only be the advisor this time... everything else was up to them.  Mainly this'll mean that I get to make the final call on shows watched: nothing offensive or explicit (no Elfen Lied, mores the pity, no hentai, no Hellsing Ultimate... and really no Dokuro-chan).  Other than that, the success or failure of the club is in their hands.  The fact that the two of them are freshman and sophmore gives me hope that it'll last for a while.

One clever idea they've already had is that the club will meet for about six hours on Saturday mornings.  The original concept was to blow thru an entire series (or two) every week... which is possible, sure, but I know that I get 'show fatigue': an inability to watch more than five or six episodes at a time (and that's for my favorites, like ARIA, Kanon '06 or Azumanga Daioh... it's a lot less for others).  I suggested they try three shows in 2-hour blocks instead.  That way, people can come for part of a series and still not miss out if they have to leave... or they could come for a genre they're fond of (i.e., giant robots) and leave when it shifts to something they don't like (i.e., highschool romance), for example.

We'll see what happens, though I'm cautiously optimistic at this time.  It seems the two students driving this have talked to quite a few people, so this might actually work.  Keep your wingtips crossed!

1 Are you considered to be "faculty"? I wouldn't have expected that.

2 Actually, no, I'm not considered faculty, but staff members can also be advisors, as long as their field of knowledge is appropriate to the club.  The head of IT at Duck U., for example, is the advisor to the computer club.

And it's certain that I know more about anime than the U's faculty combined, so why NOT me?  Duck U. is a small school; it's learned to take advantage of all of its institutional knowledge, no matter who it comes from.

I'm sure there are some Universities where this would be heresy.

Kurokami The Animation: First Episode Review. Kurokami (aka "Black God") has a curious history.  Originally a manga, it was written by a Korean manhwa (Korea's version of manga) team specifically for the Japanese market.  The authors, humorously, don't entirely know Japanese, a fact they make fun of in the omakes at the end of the books.  The anime (produced by Sunrise), however, is the first ever to be broadcast simultaneously in Japan and America (on ImaginAsian TV, dubbed).  So, what of the show? 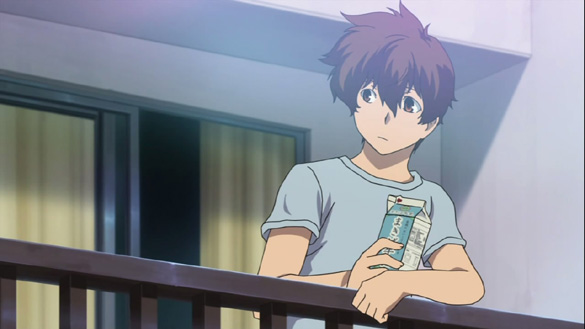 The milk is expired.
This is our hero, Keita.  He appears to be just a regular guy, a 17-year-old high-school student who lives alone.  His mother was killed in a traffic accident when he was young, an incident which he witnessed.  Seems she saw her doppleganger, and ran across the street to... I dunno.  "Wow, you look just like me," seems like an odd way to greet a stranger, but that's just me.  Anyway, while he lives alone, his 21-year old childhood friend, Akane, takes care of him, cooking and giving him money to live... an odd arrangement. 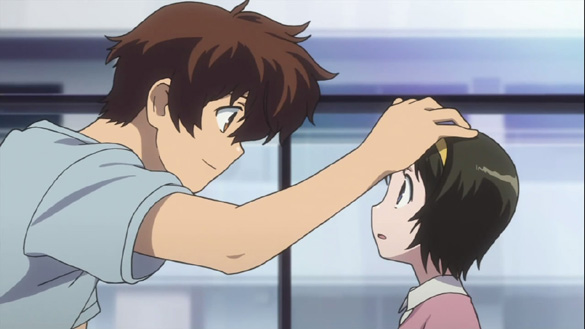 Onii-chan, why is my forehead so big?
The family next door seem to like Keita, inviting him over to dinner.  Mei, the little girl, is disappointed when he turns them down. 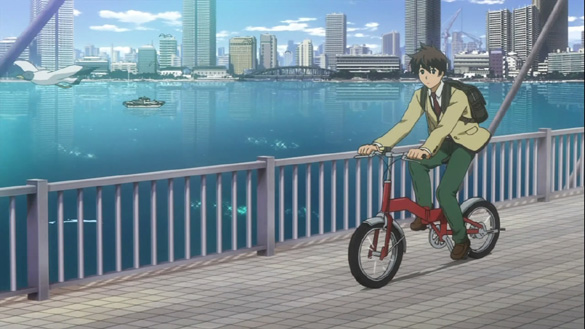 Chasing birds...
He does have one little eccentricity, however.  After school, he hops on his collapsable bike and rides down to the 'bad side' of town, a section of the city that seems to have suffered from some calamity (earthquake?) that's broken highways and submerged some of it, too.  Well, it IS pretty when the streetlights come on... 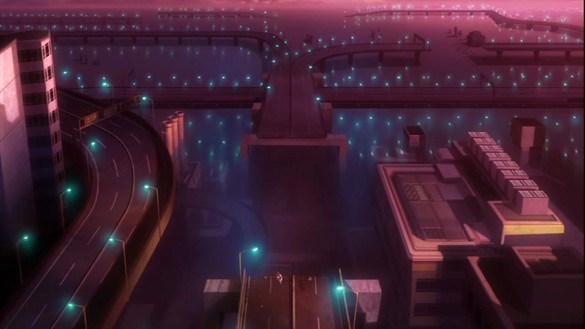 1 It sounds good, but it's definitely not my kind of show.

2 Not a chance in Hades is it your type of show, Steven.  Too many dead girls (one on-screen, one off, and then there's Keita's mom, which was also onscreen-ish)...

3 Looks pretty freaking sweet. I have to comment on the release scheme, though: it's definitely historic, but I doubt it will mean a lot to most stateside fans. iaTV is only available to cable subscribers in a few select markets, and for most of those I suspect it's locked away in a premium tier. If they're trying to steal a march on the fansubbers, this is just about the worst way of going about it; they've actually succeeded in nullifying one of the major reasons to wait for the R1 DVD release by airing it dubbed. I'd buy this from BOST or Crunchyroll in a heartbeat, but I couldn't get iaTV even if I were willing to pay for cable.

4 That show does look intriguing...and actually my kind of show.

5 I was thinking this was a lost season, but I hadn't tried this one.  Maybe it's worth a shot.

Anything else good this winter?  I was thinking of giving White Album a shot but I haven't seen any opinions yet good or bad.

6 I'm way behind on the new shows, Astro.  I took a real fast look at White Album, and the chins looked awfully pointy, but other than that I've got no opinion yet.  Also no opinion on Asu no Yoichi or Maria+Holic.  I DO have opinions on KissXSis (ugh) and Akikan (blech), though...

7 White Album is... different. One of those shows that I'd never guess to be a bishoujo game adaptation if I didn't know beforehand. Artsy, but in a restrained sort of way; the watercolor (?) effect shots are nice. After two episodes it's just interesting enough for me to keep watching, no more. Given the otherwise slim pickings this season, though, I'd say it's worth checking out.

Agree fully on Black God.  It was brutal, an adjective I've used only for the vampire kids' arc in Second Barrage. (Although that one was horribly nihilistic as well, so it still has the edge.)   It's obvious that Keita is still traumatized by his mother's death, and it's why he refuses to get close to anyone.  Now in short order, he's had two people he knows as well as he knows anyone die -- one right in front of him.

The set-up was classic  --  the rule of threes is in effect, so you know she's doomed the moment the light changes and she runs out... yet it's handled so violently it's still shocking when it happens.

I note that it has little or nothing to do with the description I read at Aroudoc's place, although the flashback sequence from the beginning makes me think there might be a time-skip of a couple years coming up.  That's just crazy speculation though.

Touhou Doujin... ANIME?!?!?! Touhou fandom is something I know nothing about.  Apparently, however, it's godawfully huge in Japan.  Originally a scrolling shooter game by a one-man 'team', it's grown into something much more massive than that.  Oh, the game is still done by the one guy, but there are now either 11 or 14 Touhou games, depending on if you want to count spinoffs or not.  It's so big, that at the recent Comiket there were nearly 900 individual sellers of Touhou-related doujin manga, and the game even has its own sizeable festival (called Reitaisai) devoted solely to a Comiket-like doujin market.

So... hugely popular in Japan, Touhou is.  Fans have assumed that it's just a matter of time before some production company scoops it up and makes an official anime out of it, but as of yet there's been no sign of that happening (one reason might be that ZUN, the creator of the games, wants to direct and write the show himself).  When you boil it down, though, it'd kinda be like making an anime based on Defender or Galaga... who knows how it'd turn out?

But, remember when I said that it was popular in the doujin circles?  Well, one group decided to make their own anime.

Skeptical?  I was.  It's a lot easier to draw a manga than to do a full-fledged anime.  So how'd they do?

1 Fandom collectively has sort of been building up to this, mainly via the medium of flash AMVs. There are quite a lot of AMV's out there which feature original animation of the Touhou characters. They're more like what was in the game, which is to say they're more chibi, but it wasn't all that huge a step from that to this.

2 Tough to say what this means for the industry, honestly.

For one thing, it's an outrageous outlier. Touhou's a popular series with an actual public license - the creator explicitly allows people to sell things with his characters, so long as they only do it at comic markets. (This is quite different from the ordinary usually-tolerated-but-not-always policy that most companies follow.) So it's kind of in an unusual situation - enough fans to attract the interest that makes it worth doing (and the manpower that makes it possible), but none of the legal encumbrance.

They got some serious voice talent out there too. Probably a smart move for the VAs in question... if they can establish themselves as "the" voice of those characters, that could potentially become more work in the future, especially if one of the professional anime studios looks at it and decides to hop in there themselves.

There's actually not a ton of back story behind the collection box. The joke is, basically, that nobody ever donates money to the shrine (or that the very occasional donation gets fished out by Marisa, depending on who you ask). The whole episode was a fairly obvious set-up, though, as it's got the same kind of story structure as the games: "something weird is happening and we don't understand why, we'll travel around Gensokyo and try to find the responsible party, incidentally blowing the hell out of anyone who gets in our way even if they had nothing to do with it". (Well, it -is- the story for a curtain-fire game!)

It'll be nice to see if they can sustain the effort long enough for an Alice episode.