When Anime & Formula 1 Collide... Part 2 So in the previous post, Avatar mentioned a show entitled Yakitate Japan.  It seems it's an anime about competition bread-baking... and if you're not rolling your eyes or thinking "yeah, that's a good concept to base a show around, sure", you're just not telling the truth to yourself or others.

Anyway, the whole second half of the series takes place in Monaco... at the same time as the Grand Prix of Monte Carlo.  So of course, there must have been an episode showing F1 cars, right?  Well, right!  Episode 44 contains the relevant 26 minutes, and while I watched it for the F1 aspect, at least the first half of the ep was pretty decent if you like shonen-style shows.

"But what about the visuals", I hear you asking.  A good question!  Here's an example: 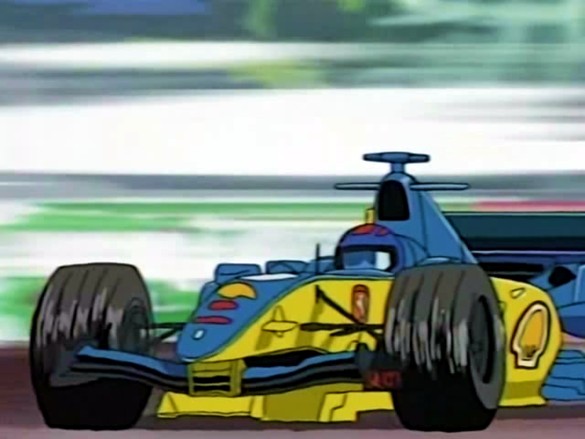 ...yep, not only is it pretty clearly a F1 car, it's from the timeperiod appropriate to the production date of the show (2004).  Not at all bad, actually.

But Avatar mentioned that David Coulthard's Chin makes an appearance, and while I'm sorry to say that he doesn't, there is a driver that does...

1 Awww, man, too bad I broke after the hands of gold episode.

2 I didn't get that far into the show, but I'm busting a gut here at your, ah, thinly-veiled fast-cars entertainment-show references. *cough*