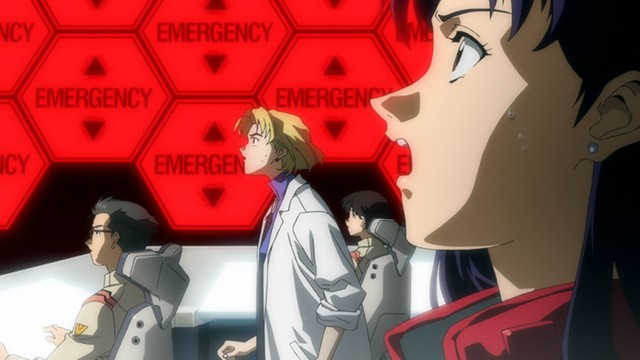 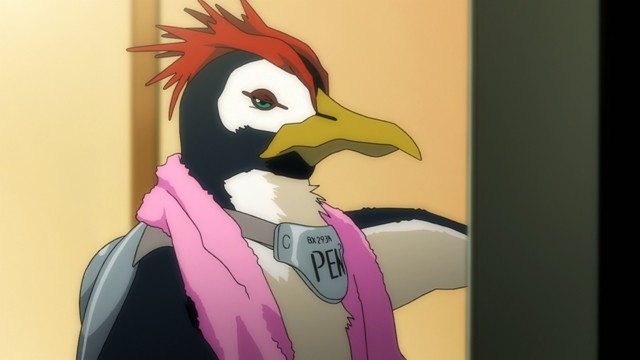 Cheesecake! It's not like I have any lack of things to write about, it's just that I have a lack of interest in doing so right now.  As in, "I really don't want to do this.  REALLY don't want to."  So I'm not going to.  Instead, I'm going to post some cheesecake for you to enjoy. 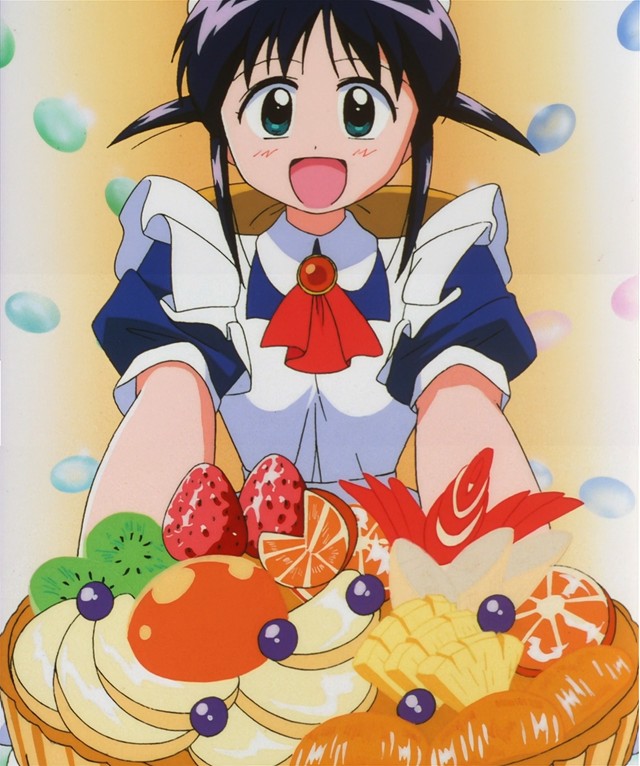 Yes, yes, I know it's some fruit-based dessert, not cheesecake.  Just play along, huh?  Imagine there's some cheesecake underneath there, okay?

1 Who's the one in the blue swimsuit? What show?

2 That's Haruka from PhotoKano.  Ep02, which explains why you don't recognize it.

3 Hmmm....I am going to step out on a limb here and say that Mahoro lack something that almost every other character pictured in this post has...

4 No Naked Apron?  I am disappoint.

Vividred Operation Ep12 The final episode of a series is usually accompanied by one or more emotions.  A sense of relief?  A feeling of accomplishment?  Sadness?  Joy?  I know I've felt all of these at the end of shows, good and bad.  However, when it comes to the type of show that I do writeups for, an approaching final episode does nothing but fill me with dread.  "Saving the best for last" is not what Rio Rainbow Gate! or High School of the Dead are known for (Ga-Rei Zero was actually a good show, and therefore exempt from these statements).  And, if we must be honest with ourselves, it's not like we're expecting much of anything out of Vividred Operation, right?  So when last episode ended with Hot Dark Girl Rei and her kickarse scarf being swallowed whole by Croooow!, it's not like there was any feeling of dramatic tension or anything.  Of course Team Aquos will rescue her, and of course there'll be a VividBlack appearance, and of course it'll kick Croooow!'s feathery tail into next week.  None of this is in doubt, the Production Staff isn't creative enough to do anything else.  The only question in my mind going into Ep12 was "Will Gendo Plushyferret be put back into his human body, and how will they manage it?"  Well, let's find out, shall we?  Welcome to the final episode of Vividred Operation! 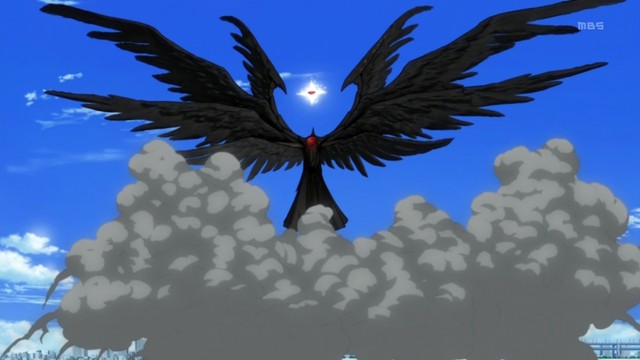 Huh.  Looks a lot like the end of the penultimate episode of Vividred Operation.  That's Ascended Croooow!, after swallowing Hot Dark Girl Rei and her kickarse scarf, and there's still absolutely no resemblance to one of Evangelion's Angels.  None at all.  Purely coincidental.  Please don't sue us, Gainax.

RHF has gone into mental BSOD, crying about how she couldn't protect Hot Dark Girl Rei, while the other three just look at her like she's gone insane.  To be fair, that's pretty much how I feel about myself regarding this entire show, so I can't honestly hold that against them.  Y'know what?  I just wrote that sentence, and I honestly can't claim there's that much vitriol behind my words.  Vividred Operation doesn't create the sort of WTF levels that, say, High School of the Dead or Rio Rainbow Gate! caused in me.  It's just sorta there, and that's a bad place for a show to be.  It's a dead fish wrapped in newspaper of a series, lying on your doorstep, slowly beginning to smell in the midday sun, and perhaps you need to clean that up. 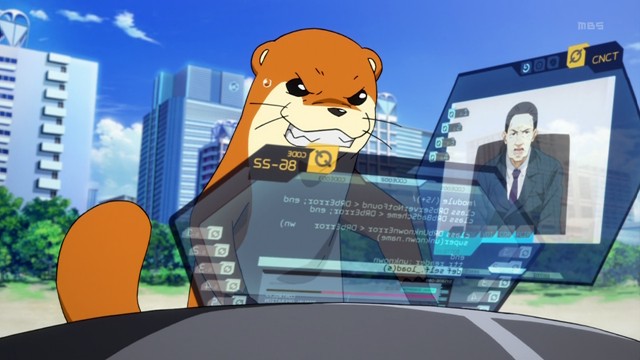 MegaCroooow! proves to be even more powerful than the Alones... conventional weaponry could at least whittle away at them, but the Black Bird of Doom proves to be impervious to everything thrown at it, short of N2 mines, or whatever it is they call those here in this Eva wannabe.  But then, just when all hope seems lost and more, Gendo Plushyferret discovers that M-m-m-m-monsterCroooow! has the exact same energy signature as Hot Dark Girl Rei and her kickarse scarf... she's still alive, and inside that thing.

Well, yeah.  Seeing how this show has been more about Rei and less about the nominal main character, RHF, you'd kinda expect her to be alive, wouldn't you?  I also expect to see Vividscarf by the time this is all over.  Heh.  Vividscarf Operation... I'd pay good money for that.

1 We're on to you, Duck. You're just covering up that ALL you birds are full of the red and the glowy stuff. It's just a conspiracy of the worldwide mallard menace!

Semi-seriously, I think I enjoyed your recaps more than I would have enjoyed the show. Having been exposed to mind-altering dosages of the original Eva, I have time only for GOOD homages, not meh ones...

2 I'm a bit dense (and have only watched Evangelion Original Flavor through once) so I didn't pick up on the Eva-ness of ViviDred until late. But man oh man, THIS episode. Subtlety, guys, SUBTLETY.

At any rate: Fun writeup, man.

3 How the hell did they survive the fall???

4 Man, AvatarADV, I don't know if I'd want to be exposed to that much Evangelion... and I bought all the VHS as they released.

Himawari just took advantage of her natural Floatation devices to not drown, and uh, well, if you've ever TIMED the amount of time it takes to deliver a punch from Orbit, she had enough time to swim ashore AND naturally air-dry.

6 And the catgirls are keeling over in droves! 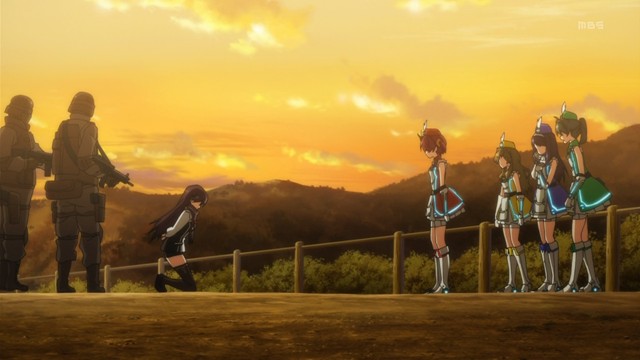 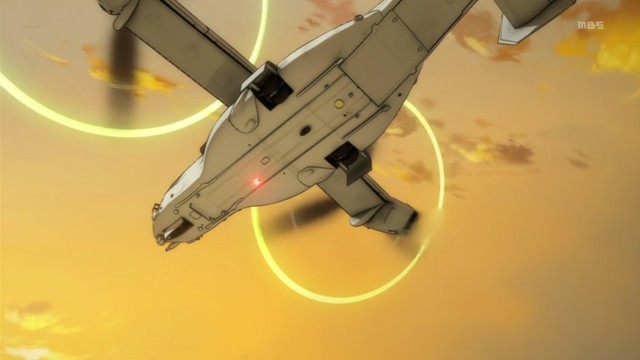 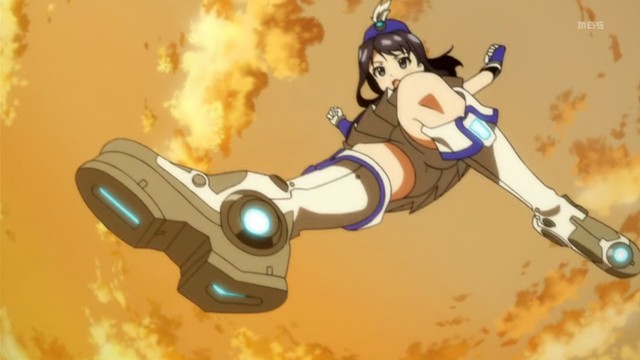