Manimani's Best Sora no Manimani isn't the best show of this season; that's a dead heat between Taishou Yakyuu Musume and Bakemonogatari.  But I'll be damned if it isn't my favorite show of the season, and maybe the whole year.

My favorite part of the show is Sayo Yarai, who's the brains behind the Astronomy Club.  She's also the steadying rock of the club, an excellent balance to the impulsive and frenetic Mihoshi.  If there's ever been an anime I've been drawn to because of a single character, Sora no Manimani would be it, and Sayo would be that character. 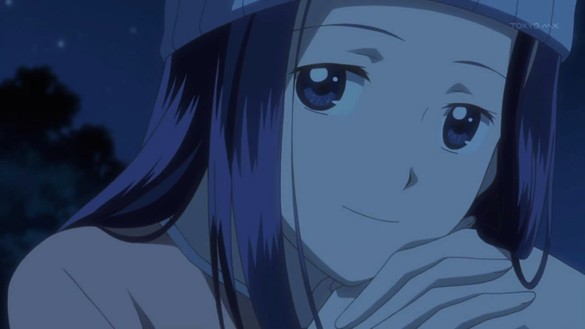 Sayo being Sayo.
Which is not to say that SnM is a one-character show; far from it.  The whole gang is fun to be around (except for the Club President, who tends to pass out and bleed from the mouth if you look at him funny, or if the wind is blowing), the humor ranges from intelligent to slapstick, the art is pleasing to the eye, and the stargazing scenes look fantastic.

But I'd rather have Sayo be the main character.  She's just more interesting than Mihoshi and Saku, both of whom are pretty much cookie-cutter.  Saku's a bookworm and Mihoshi's on speed; we see them all the time in anime.  Sayo's quiet, but not a Rei or Yuki.  She can be goofy, smiles a lot, and people listen when she speaks.

And in ep05, we discover she has some other assets...

What's Wonderduck Watching? Summer 2009 Edition It seems that every anime season in Japan brings with it moans of pain from the American fans.  "There's nothing good," goes the refrain.  "This is the worst season ever."  Inevitably, though, there's at least one or two shows that people discover to be pretty darn good, and many of the rest end up being at least watchable (even in the best of times there's unwatchable shows, too).  It's a twisted circle of life, but it's one that anime bloggers and readers seem comfortable with, on the whole.

But I noticed something odd heading into the Summer 2009: a surprising dearth of "the sky is falling" posts!  There seemed to be a little bit of something for everyone this time around, and a new season of The Melancholy of Haruhi Suzumiya, to boot!

We're about four weeks into the season, and the long-anticipated Haruhi 2 is widely considered a bust (though not by me, I'm diggin' it), but the rest of the shows are showing a remarkable level of quality.  Instead of "thin slicing" the season, though, I'm just going to cover the programs that have made the cut for me. 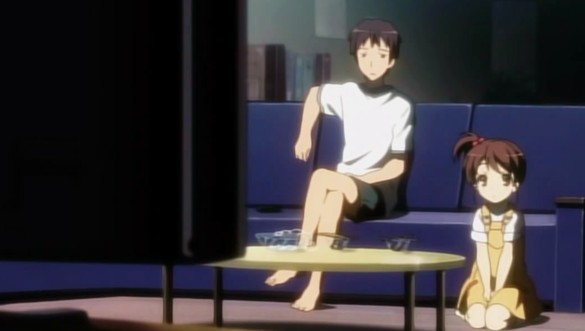 2 By the way, in that show about girls' baseball, which character is it in the video clip? I'm wondering who the seiyuu is who sang that clip.

3 That's the rosy-cheeked Koume, as voiced by Kanae Ito.  She's also one of the voices in Sora no Manimani, which I didn't realize.

Looks like Ms Ito is a new voice in anime; she doesn't have a big resume.  When Queen's Blade is your career highlight, you're either quite new, or quite bad.  I'll go with 'new'.

I've watched the first few epsiodes of Aoi Hana but haven't found it that riveting so far. Same for Bakemonogatari, seem first 2 but not in any hurry to watch more.

Did really enjoy Higurashi, just finished season 2 recently and it does all make sense eventually. The live action movie is ok but not as OTT or as fun as the anime

5 I think that clip just sold me on Taishou Yakyuu Musume. If only it weren't being aired in 4:3 pan-and-scan. Damn you TBS!

I've never enjoyed a Shinbo/SHAFT show, and Bakemonogatari proved to be no exception. I've enjoyed shows directed by Shinbo (Nanoha) and shows produced by SHAFT (ef, REC), but somehow the combination is anathema to me.

Overall, though, this season has been great for me so far. I'm following eight shows right now, which is already a personal record, and I've still got a few more to check out.

6 Not really related to your post, I just thought you might enjoy this piece by artist Florentijn Hofman. Now that I think about it, you've probably already seen it, but just in case you haven't...

7 This season lacks mecha. Not that I am disappointed or anything, just making an observation.