Click below for the whole scoop!  Warning: quite a few screenshots, so dialup users, click and go make a sandwich or something. 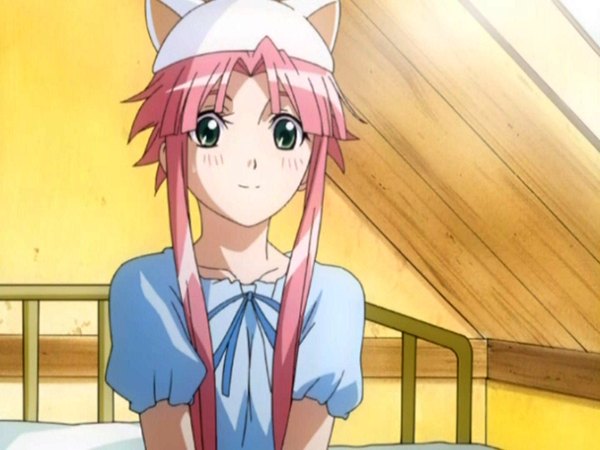 Surprisingly, the first show that I'll cover isn't from the fall season... or, for that matter, from 2007 at all!  Via e-mail, Honorary Duck Jeff convinced me to watch ARIA, which first came out in 2005.  ARIA is the story of an immigrant from Earth, named Akari, and her time as a trainee gondolier on the planet Mars Aqua, in the city of Neo-Venezia.  If you think this is a silly premise, well, you're not wrong... but you're also missing the point of the show.  The 'why' and 'where' and 'what', and even the 'how', portion really isn't important: it's all about the 'who', and at this, ARIA excels.  It's an episodic, slice-of-life show, and watching it gives me serious flashbacks to Yokohama Shopping Trip.  No, it's not the same story, author, or animation studio, but it sure feels like it.  And that, friends, is a VERY good thing.

I've found that recently, I've been leaning towards slower-paced, gentler anime.  Kanon, Hidamari Sketch, even Crescent Love and World of Narue, would fall into that category, not to mention ARIA and Yokohama Shopping Trip.  Having said that, it's really no surprise that I'm head-over-heels (ducks have heels?) for Sketchbook ~Pure Color's~. 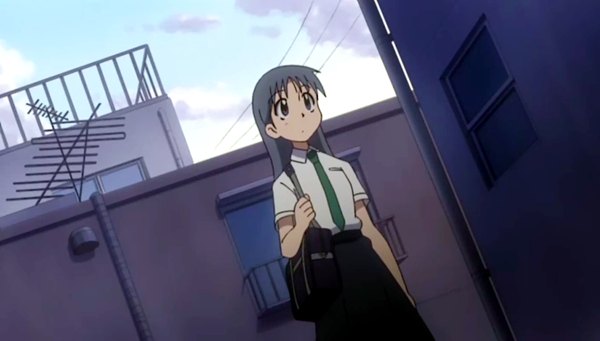 I've written about the show before, but I'll add that the supporting cast has become somewhat more memorable, and the animation quality hasn't slipped at all.  The show is adding more laughs, too (in particular, the all-cat episode is quite funny).  I still can't recommend it enough, and I still understand the people who can't stand it. 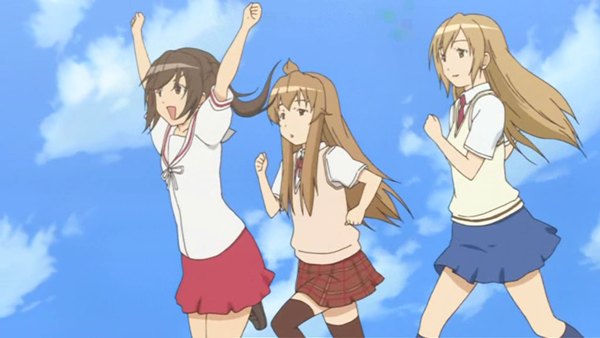 I've also written about Minami-ke before, and while I'm not quite as hooked on it as I was to begin with, it's still a ball to watch.  Any show that has a loli being used as a weather charm is okay in my book!  Still recommended, particularly if you liked Azumanga Daioh, which is about the closest I can come to describing the show.  Again, no similarity in plot, animation style, or anything like that, but it still feels like a valid descriptor.  The show knows what it is, and doesn't try to be more than that... and that's perfectly okay. 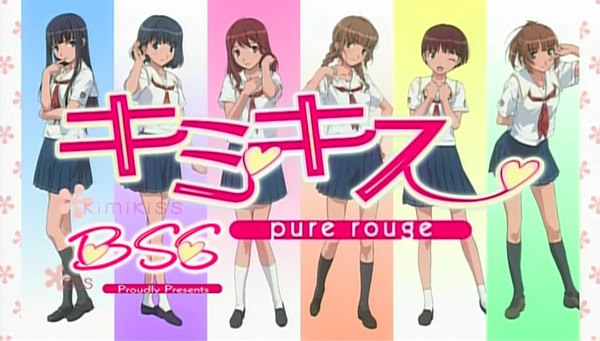 The next show is all high-school-angst, all the time.  That'd be a serious black mark against it, if Kimikiss: Pure Rouge took itself 100% seriously.  Fortunately, I don't think it does, quite.  It's also trying to handle itself more or less realistically (or as realistically as any romantic comedy can).  More importantly, while you can't tell from the above picture, it's NOT a harem show.  The two male leads have one and two girls (respectively) that they're interested in, and that's it.  No hordes of females throwing themselves at the protagonist for this show!  The character designs are outstanding, the animation level is about average-to-good.  Plus, it has one thing going for it that no other series this season has: 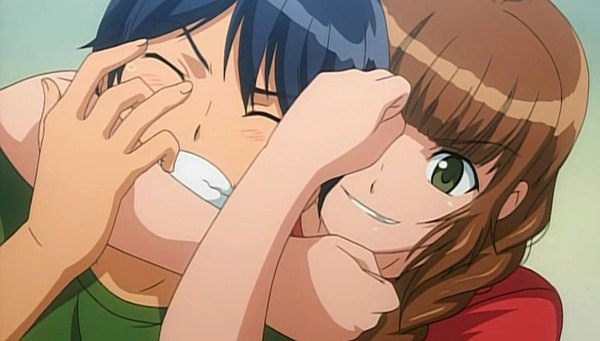 Mao-neechan is one of the most engaging female characters to come down the pike in... well, a year or so.  She's funny, good-looking (and knows it), can be flirty or serious as is appropriate, and would rather play videogames and oversleep than go to school.  She's also NOT interested in either of the male leads... she treats them more as younger brothers.  Appropriate, since they're all childhood friends from waaaaaay back.  The fact that she's living with one of them (she's just returned from overseas) just plays up the whole brother-sister thing.  I think she's got lousy taste in men, though. 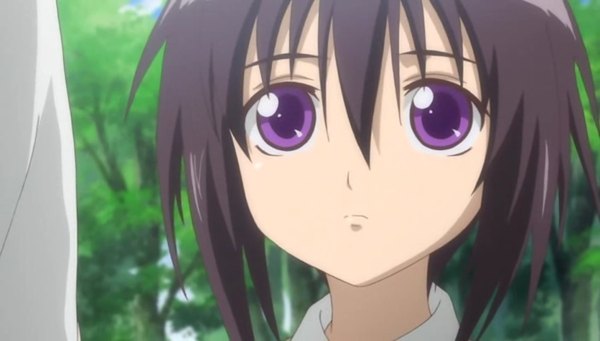 Okay, the eyes in Bamboo Blade are scary: granted.  Truth be told, I keep expecting the female characters to suddenly sprout vectors, a la Elfen Lied (see the picture below left).  Hasn't 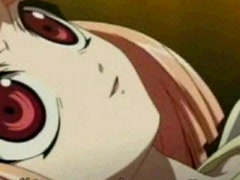 happened yet, but I'm still hoping.  Character designs can only be called "unique", particularly for the "Egg-boy", the animation is pretty mediocre (with the occasional flash of above-average), and the plot is pretty darn thin.  However, this series does a great job of keeping you in stitches.  It really DOESN'T take itself seriously, at least outside of the kendo dojo.  There's been few laughs IN the dojo, and if you pay attention, it's not doing a bad job of teaching the basics of kendo in the process.  Probably this season's "anime I didn't expect to like, but do" for me, and I'll bet it's the same for a lot of watchers, too.  Watching sweet Myu-Myu turn into an evil sadistic she-wolf at the drop of a hat has been the highlight of the year.

Longtime readers of the anime portion of The Pond, those who know that I've got a thing for KyoAni,  are probably noticing the absence of Clannad by now.  It's Kanon without the snow, for heaven's sake, I should be all over it, right?

Well, um... I haven't started watching it yet.  I've just been too busy recently, and not having any foreknowledge of the plot of the show (intentionally, I might add), I actually have some trepidation about starting it right now.  If it really IS Kanon sans snowflakes, that might be a little too emotional for me to handle, what with everything that's going on at work these days.  I do intend to watch the series (it's KyoAni, for god's sake... of COURSE I'm going to watch it!), just maybe not right now.  However, here's a screenshot from episode 1, just to tide you over.  Please keep in mind that I have NO idea what's going on here: 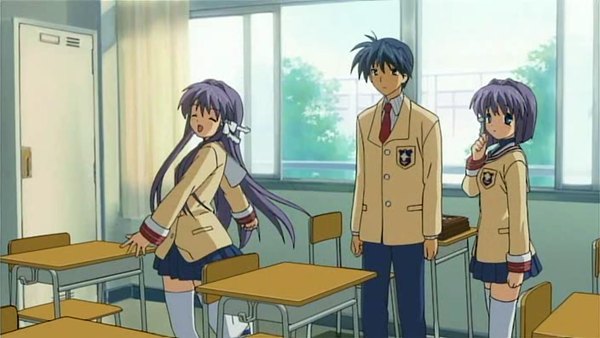 Yup, that's KyoAni and Key, all right.  But who picked the color for that uniform jacket?  Ugh.

Take a look at a couple episodes of Mokke. I'm not quite sure how to describe it, but the best I can come up with is Miyazaki on a TV timetable/budget, with a little sense of humor thrown in for good measure. It has a Ghibli look to it, and it's centered around a lot of Japanese myths/superstitions come to life.

Mao-neesan is awesome, but she's shown some early signs of jealousy over the lack of attention from Kouichi now that he's got a woman.

ef looks like it has the potential for more angst than a Geo-Front full of Reis, but it's too damned pretty to give up (and Shaft's visual hold-overs from Zetsubou Sensei add a bit of spice here and there).

Will, I've only gotten through... (checks) ...episode four or five of Kimikiss.  I actually thought I had written something along the lines of "...and she's not (through episode 4) interested in the male leads...", but guess I missed it.

*groan* More shows?  That's already six up above, and that doesn't even count ones that are leftovers from LAST season (Sky Girls, for example, or Idolm@ster Xenoglossia, both of which I still need to finish).

Heck, I was happy to be able to watch the last DVD of Haruhi this weekend...

Well, I don't mean to make it sound too serious at this point. She's just made some very recognizable facial expressions in a couple scenes now that Kouichi has a woman to draw his attention.

Sky Girls just never grabbed me in the old OVA. I'm just glad the final episode of Xenoglossia finally came out. It was looking pretty dire there for a while. And lets not even get into the subject of a.f.k dropping off the face of the earth before finishing Zetsubou Sensei.

If I include SZS, I'm up to date on 10 shows right now (I put the long weekend to good use).

Actually, I was really naughty and grabbed a fansub of Gurren Lagann and watched through the whole thing as well. Gainax did a fantastic job on that show. I'll be damned sure to grab it on DVD. I think Steven would have to call it the five-bladded-razor of evolving/upgrading mecha.

4 I like Aria (a lot), Kimikiss, and Minami-ke, but my pick of the season has to be Moyashimon. Oryzae-tan FTW!

Oh, and as Will said, Mokke is worth a look.

5 After being turned on to anime by reading posts here at the pond, I have progressed to my first attempt at fansubs. I'm loving Minami-Ke. I've only seen the first two, but have downloaded all eps and am looking forward to more. I've also been watching Ninomiya-kun, which after five eps is fun, but not as good as Minami-Ke... and still hasn't revealed a story line! After reading weekly episodic reviews at other anime sites, I decided I'd download a few different series and give them three episodes to hook me. So I selected Bamboo Blade, Blue Drop, Clannad, Ef~A Tale Of Memories, KimiKiss~Pure Rouge~ and Sketchbook~Full Color'S~ (per Wonderduck's glowing recommendations). I'm only one episode in to most of them (still haven't seen any of KimiKiss or Sketchbook) and after that one episode, Blue Drop has come out on top, with Bamboo Blade a close second!

6 I have an otaku blogchild?  COOL!

Mike, I dropped Blue Drop after two episodes, m'self... just wasn't for me at that time.  EF I've not looked at (look!  Eyepatch girl FTW!) beyond the very odd "special" that was on a'suki this morning.

F1 and Anime: two great tastes that... um... well, are completely dissimilar, and don't work well together.  That's The Pond for ya!

7 You gotta have something to keep you entertained during the F1 off-season, don't you?

8 Yup... The Duck and SDB have fueled my new anime interest with clever blogging. You guys are a bad influence! After reading the posts above I added Mokke to my list. First three eps. just finished downloading. Now I've just got to find time to watch it all! The only ones I''ve been avoiding are the series that seem to be "second season" (or more... like Gundam). As I'll have missed all the history/backstory.