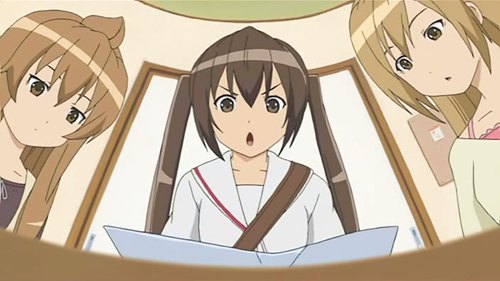 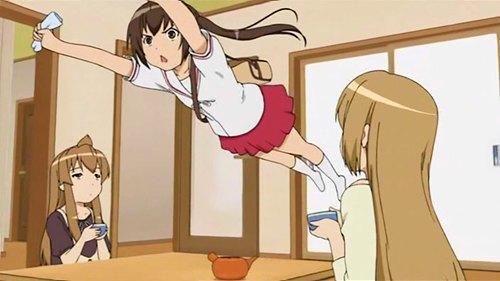 But the show that's completely captured my heart isn't Minami-ke:
...it's Sketchbook ~Full Colors~.  Again, there's no visible plot.  It makes Kanon 2006 look like an action show.  But like World of Narue, it's innocent and sweet, and I feel like I've curled up in a warm blanket every time I watch it. 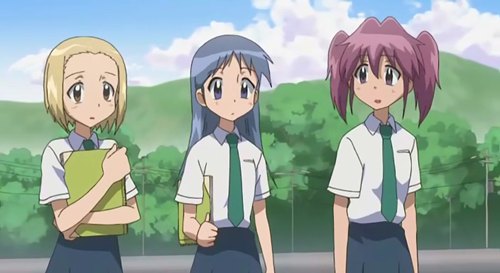 The main character is Sora, the girl in the middle.  She puts me in mind of a well-grounded Osaka from Azumanga: not spacy, just.. a little different.  She's quiet, shy, loves to draw, and looks at life in a reflective way.  Her friends in the art club are a mixed bag... the one on the right has two handpuppets that accompany her everywhere, for example, but they're nice, too.

If I had to criticize the show at all, I'd say that the supporting cast, while fun, aren't particularly IMPORTANT.  I can't remember any of their names, for example.  Oh, there's puppet-girl, and gothy girl, and loud guy, and the wacky teacher (and her chicken), but two episodes in, it's simply Sora and the Others.

That all might be a drawback, if Sora wasn't so great.  If it continues on like this, Sketchbook might wind up as "the thinking anime fan's sleeper hit."  It won't be for everybody, that's for sure.  It's not flashy, but it does make you feel like you know this girl... and want to know her a lot better.

And every now and again, you get eye-candy like this: 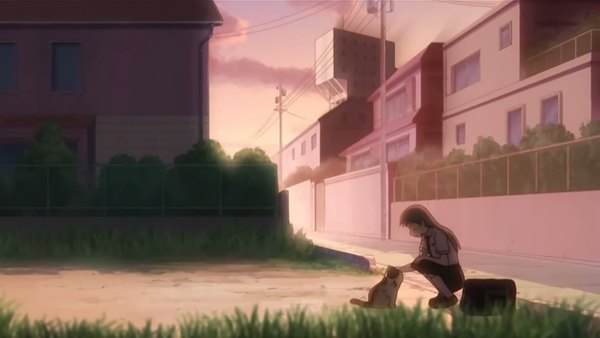 ...and you sigh, smile, restart the episode, and wonder when the fansubbers will get the next episode out.

It's just what this tired old duck needed.