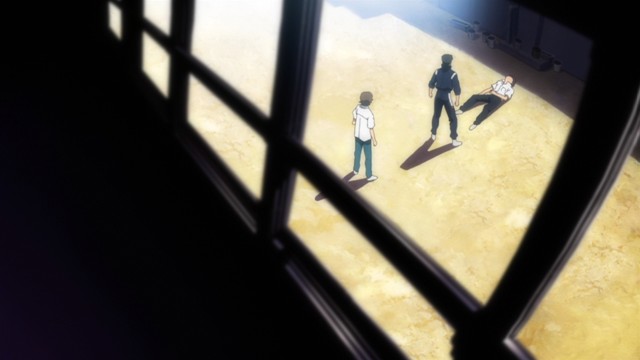 
"Y'know, Shinji really got his arse handed to him during that Angel attack.  Do you think it might be a good idea to get him some training or something?" 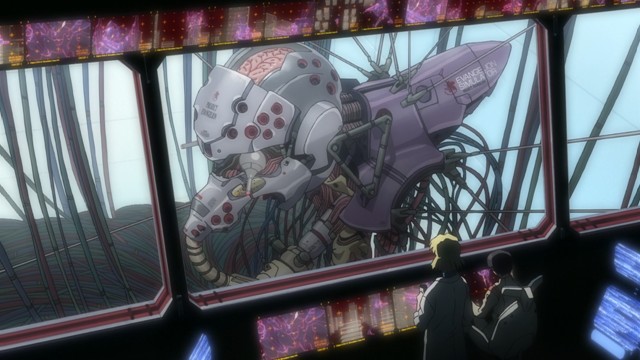 So they stick him in the world's creepiest simulator that appears to be a failed Eva unit, what with a spine and a brain and all, and teach him how to shoot stuff.  Now, I don't know about you, my readers, but I know that I would find these training sessions to be important.  After all, my life and the fate of the world and everybody on it would depend on my abilities to operate an Eva unit like an effective combat machine.  Our Hero, however?

Nigh on catatonic.  The world is doomed.  Now I'd be the first to admit that I'd be scared out of my mind by the prospect of facing an Angel in combat, but seeing how my choices would come down to 1) fight or B) die, I suspect I'd get over the fear.  Not our boy Shinji, though.  Instead he just mentally retreats and becomes an automaton.  This, libbets and bunnymen, is our only hope.  I'm going to go drink heavily, pass out and wake up in a puddle of my own vomit now.

Even in school, where you'd think he'd be revered as if he were a god amongst men ("Women want him, men want to be him... he's an Eva pilot!"), he's treated with scorn and suspicion... mainly because he's withdrawn and talks to nobody.  Not even his classmate, Teh (hot, blue haired) Rei.  Yes, even his fellow Eva pilot, the one with the personality of a piece of scrap plywood, doesn't talk to him.  He takes to lying on the roof of the school.  The birds ignore him.  However... 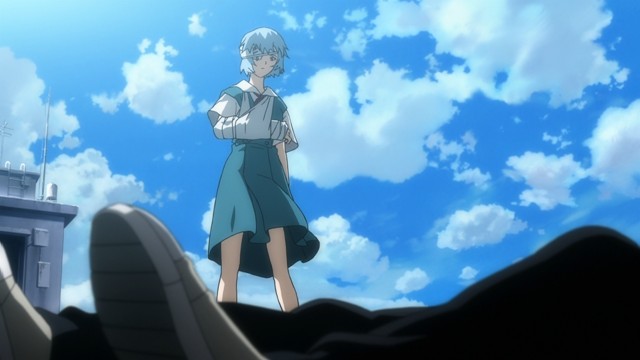 ...there's an emergency, so The (hot, blue haired) Rei lets him know about it and runs for NERV, leaving him behind.  She's injured, bandaged, with her arm in a cast and an eye covered, and there are roofing tiles with more personality, and she's still more lively than Our Hero.  He's making my job easy, and I want to slap him into next week.  In fact, he's making my job too easy.  I'll admit to a fondness for low-hanging fruit, but I prefer to work a little bit for my writeups! 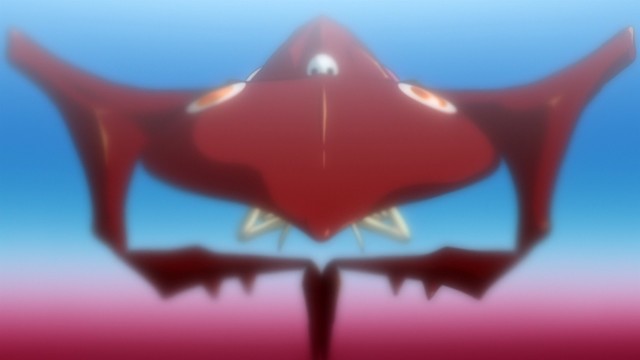 The Fifth Angel.  Wait, what?  We've only seen two that we know of, what happened to the other three, he says acting like he doesn't actually know what the other three are so don't be tempted to write about it in the comments I'm pretending to have never seen the show during this writeup okay?  Actually, the more I look at this new intruder, the more I recognize it... hang on... 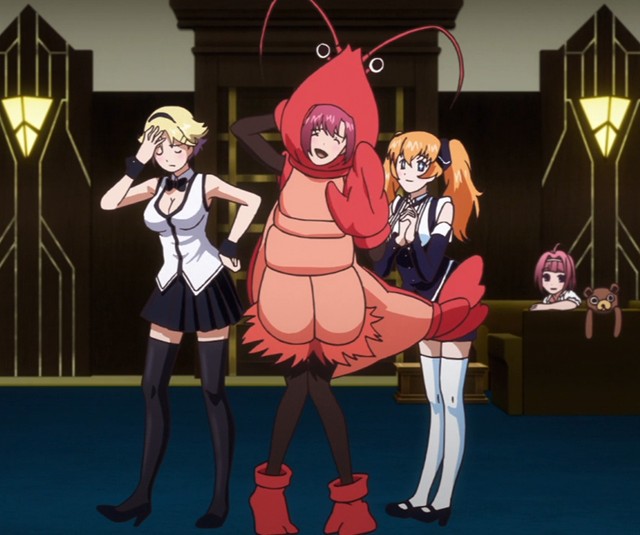 That's it, we're all doomed... and I've completely ruined this show for everybody, because from now on, every time an Angel comes on-screen, you're going to realize that it's being piloted by Rio... and that just points out the hopelessness of the situation.  NOBODY beats Rio.  Ever. 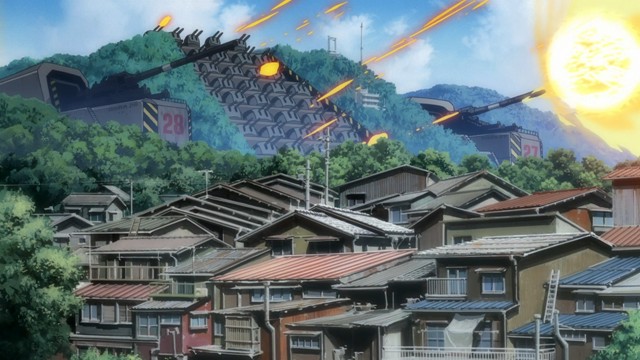 However, the defensive systems of Tokyo-3 are gonna give it a shot, apparently by lowering the property values of the houses in the foreground.  "Here we have a two bedroom, two bath, with lovely balcony views of the artillery-strewn landscape nearby.  It's got great access to the train lines and... hey, where are you going?"  Did I mention that Media Blasters will be releasing Rio: Rainbow Gate! on DVD September 24th?  I haven't preordered yet, but only because I'm hoping for a BD release. 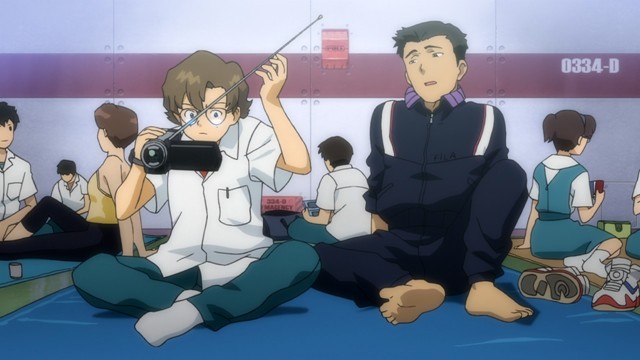 As are Shinji's friends, stuck down in an evacuation shelter.  That portable tv/camera doesn't have the greatest resolution in the world, but it's good enough for Rio.  But I digress.  The guy on the left, who's name we haven't been told yet, appears to be something of an Evageek.  He really wants to go to the surface and see the battle in process, despite the official orders to stay under cover.  The guy on the right, who's name we haven't been told yet, is his friend, so he'll go too.  And off they sneak.  Meanwhile...

...Shinji's a size queen; he's got a thing for big guns.  The bigger, the better, apparently.  Even though his is the biggest in the land, he still can't use it right.  He just holds down the trigger and starts spraying everything in sight.  Man, I'm sorry I took that joke that direction.  That was really unfortunate.  You may ask yourself, just exactly how big is that thing, anyway? 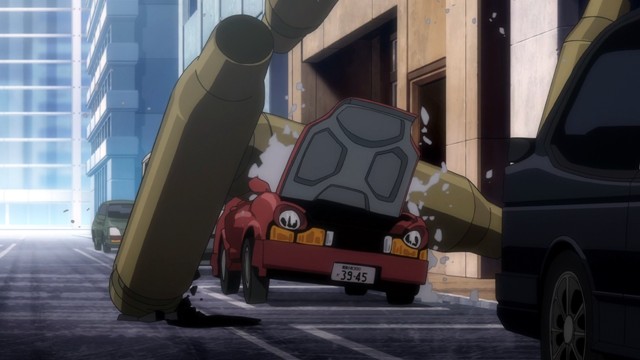 That big.  Aw, jeez, it's a rental, too.  Gonna have a hard time explaining this to the insurance company!  Can you imagine what the owner of that car is gonna feel like when he comes up out of the shelter?  "I'm alive!  I'm alive!  I'm... aw, crap!"  Speaking of which... 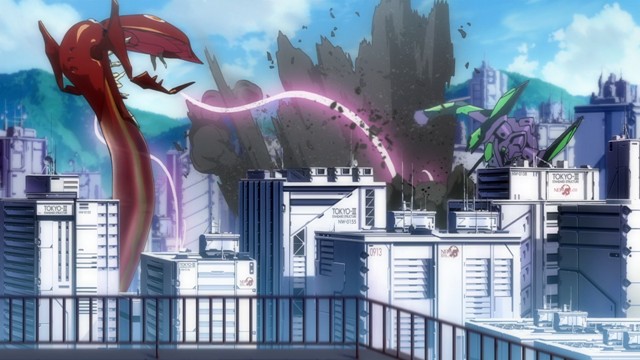 ...that's Shinji's reaction when Rio looms out of the smoke and starts attacking using energy whip-type things.  He manages to dodge them for a bit, but eventually the MVCD knocks a building or two on him and then things get silly. 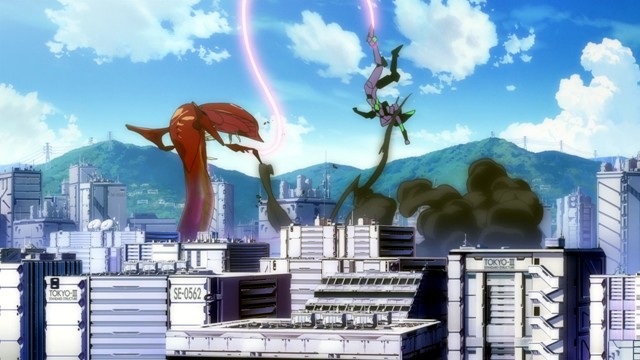 Sillier.  She grabs Kenji and tosses him and his giant robot across town into the nearby foothills... right where his friends are videotaping the whole thing.

"Yeah, wanna punch me in the face now?  Didn't think so, you little punk."  Actually, I'm fairly sure Touji (for we finally find out his name in an electronic database) would indeed like to do so, as would Kensuke (again, database)... after all, that'd be a normal reaction to having a giant robot dropped on top of you.  And, hey, it's Shinji: punching him in the face is pretty much the default greeting.

Which would suggest that Rio is just trying to say "hi," and is shaking hands with him!  Never mind that the energy-whip-thingies are burning through Unit-01's palm armor, and why would his palms be armored, he asks in an innocent tone.  Anyway, Our Hero can't really fight Rio with Touji and Ken being there, so NERV HQ makes the decision to open the cockpit and let them in.  With Unit-01's power supply about to run out, they'll withdraw and try again later.

Except now that his pals are safe with him (well... okay, not so safe at all), Shinji appears to have gotten tired of running away.  And he's a little pissed at the world.  And maybe, just maybe, Our Hero has a little bit of a spine forming. 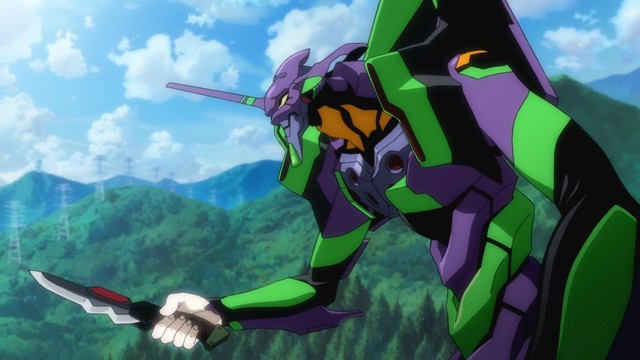 There is a saying: "never bring a gun to a knife fight."  I believe there should be a corollary: "if you're going to bring anything to a knife fight, a giant robot is a good place to start."  Our Hero, armed with God's Own Ginsu, charges Rio while his friends cower behind him in fear. 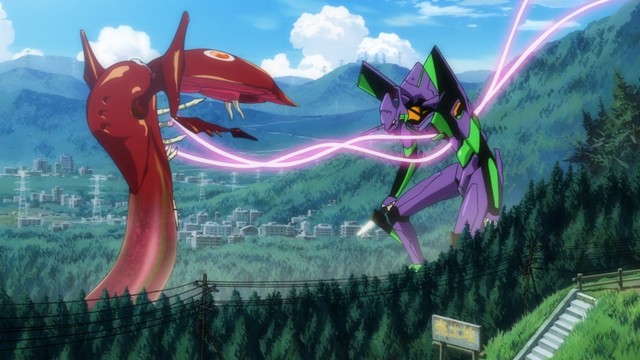 Corollary to the corollary: "if you're bringing a knife-wielding giant robot to a knife fight, make sure your opponent doesn't have long-ranged energy whip things that it can use to stab you in the gut with."  Fortunately for Our Hero, he doesn't have any guts, so he just goes ahead and stabs the knife into Rio's glowing red orb which I swear isn't a metaphor for anything. 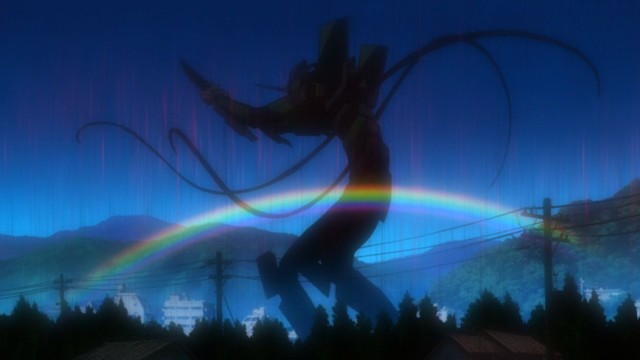 Well, kinda.  Other than the whole "stabbed in the gut twice, and badly burned hands" thing, that is.  Other than that, he's fine!  Right as... um... rain?

While I had originally intended to continue on, I think this is a good place to stop for now.  Next time, more zombies!  More of Teh (hot blue haired) Rei!  More Angels!  And Shinji is even MORE moody!  See ya then!