Rio Rainbow Gate! ep05 To be honest with you, I'm a little disgusted with myself right now.  While watching this week's episode of Rio Rainbow Gate!, I came to the startling realization that I'm actually enjoying this startlingly bad piece of drek.  Now, I've never been an anime snob.  I understand that not every show can be true works of art, and that there's a place for those shows that don't have a huge budget or deep characterization or engrossing plot. I'd like to think, however, that when a series is as lousy as this one, I would know enough to point at it and laugh, then consign it to the rubbish heap of history, never to blight my hard-drive again.  So why in Miyazaki's Name do I keep coming back to RRG!, and worse still, look forward to it?

I don't have a problem.  I can stop whenever I want.  Why are you looking at me like that?

This week, Rio has a meeting with The Owner but forgot to get her uniform from the cleaners (she only has one?).  Not wanting to be late, she grabs the outfit nearest to hand... 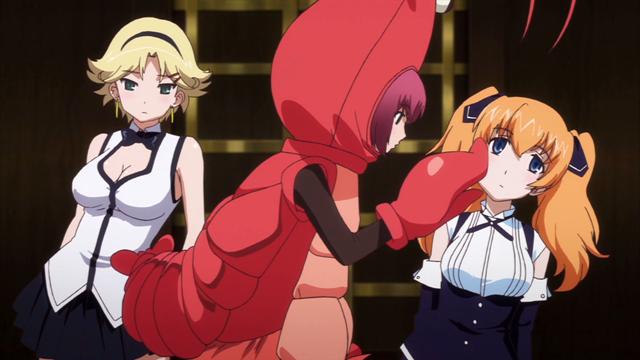 See, this screencap is RRG! in a nutshell.  Why in the name of all that's holy was a shrimp costume the only piece of clothing Rio had to wear?  And why is it that the other two look so resigned to the fact that Rio is wearing a shrimp costume?  Just what in the world goes on between episodes?  "Oh no, she's got the shrimp costume again... just don't make eye contact and everything will be okay.  It's just a phase..."  Truth be told, that's an episode of RRG! that I really want to watch.  Maybe it'll be an OVA or something, perhaps an omake on the Blu-Rays... and if that last sentence fragment didn't make your blood run cold, nothing will.  Most of Miyazaki's movies aren't available on Blu-Ray without ordering from Japan.  Neither is Ghost in the Shell: Standalone Complex.  Azumanga Daioh?  Nope. Bakemonogatari?  No.  Black Lagoon?  Not in the least.  But RRG! will surely have a BD release, and probably sell well, tanjdammit.

Sorry, where was I?  Oh, yes, the meeting.  Turns out that The Owner is about to open a new casino on his Casino Island, something called the 'Sky Resort.'  He assigns Rio and her harem to work the grand opening... they're to meet with someone named Linda to get used to the place. 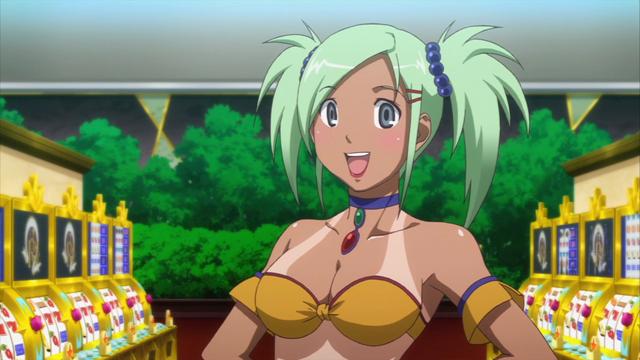 This is Linda... genki girl, distinctive costume, disheveled hair, heavily tanned... yep, she's a native island girl.  And head dealer at Sky Resort.  But she has a secret. 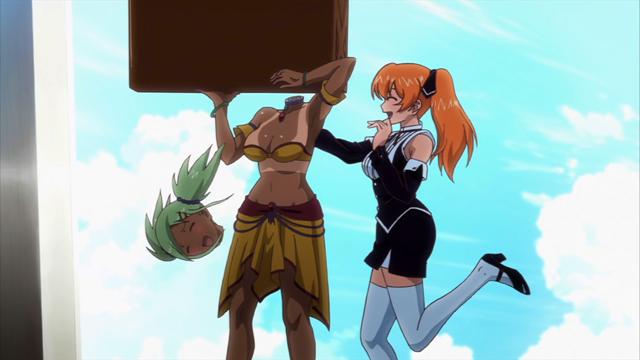 OH GOD!!!  ANYA JUST KILLED HER!!!  (Come to think of it, that's another episode of RRG! I'd like to watch: Anya's clumsiness causes havoc and kills or injures dozens, if not hundreds, of people.  Rosa Canyon impaled on a one-armed bandit.  The Owner crushed beneath tons of rubble.  Tiffany Abbot's head bouncing around on roulette wheel.  Elle and Ille would be fine, however... can't hurt them.  Man, I'm really looking forward to the OVAs now.)

(Did I say just that out loud?)

Anyway, no, Linda is actually both a robot and the master computer for Sky Resort. 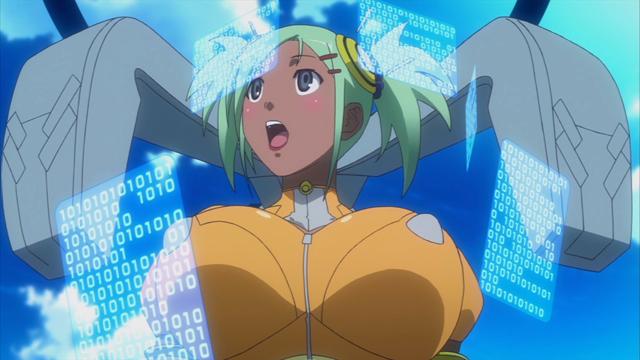 I'm not saying nuthin' about the white knobs on her interface suit.  Anyway, it shouldn't be surprising that Linda is also a Gate Holder.  Of course she is, I'm sure nobody anywhere would have a problem with having a robot/computer be the dealer in a game of chance.  Surely she'd have no advantages that would benefit the house, no certainly not!

Now, you sharp-witted readers might be curious about Sky Resort itself.  Just why does it need a robot to be in charge of the entire complex?  Why, that's easily explained! 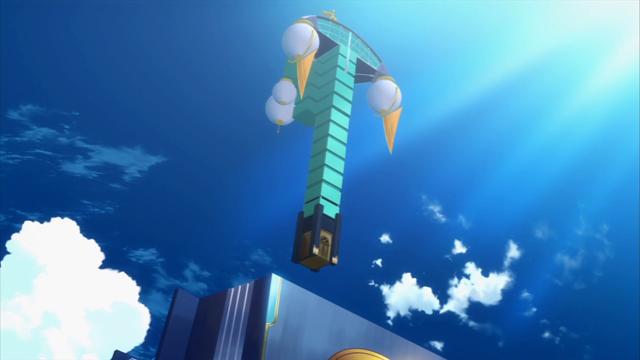 It can fly.  Of course it can, why else would it be called "Sky Resort" anyway?  The highest altitude that's mentioned in the episode is 500 feet, but it was still climbing at that point.  Now I just want you to think about all the problems that'd be involved with the creation of a flying building that's also a casino... it'd have to be rock-steady to avoid influencing the roulette tables.  One little bit of turbulence would spill so many drinks the carpet would have to be plastic.  Let's not even mention the enormous swimming pool and water slide that's built into the thing as well.  And all without visible or audible means of propulsion or lift!  The Owner (or someone in his employ) appears to have figured out the secret of anti-gravity!  Well, I guess that explains why Rio doesn't use a bra under her everyday uniform...

But all is not well in the floating casino in the sky (wasn't that a Miyazaki film?).  A creepy boy walks into Linda's control room and hacks into her with a taser.  The Sky Resort, deprived of its flight control system, plummets from the sky and crashes into the sea.  It breaks apart into tons of concrete and rebar, dumping what few survivors there may have been, battered and injured from the initial impact, into the water.  There will be no rescue from Casino Island however, as the millions of tons of building smashing into the water causes a small-scale tsunami that inundates the island.  Many of the structures are scoured away, all but the highest levels of the tallest buildings are flooded, and the combined road-and-rail bridge that leads to the mainland is severed.  The end of thousands of guests will be mercifully swift for most.  Some however are swept farther out to sea and caught in the ocean currents.  For them, exposure and dehydration will lead to terrible, painful, lonely deaths... if the sharks don't get them first.  (OVA #3) 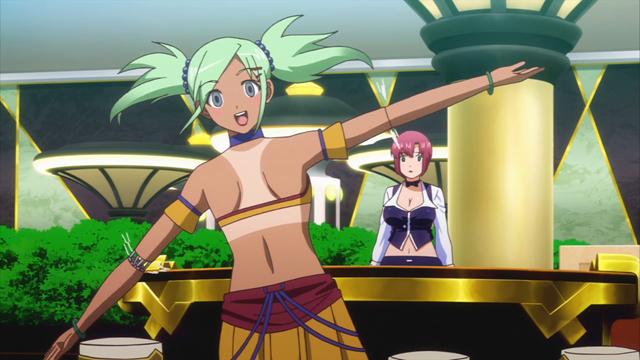 Or... Linda just begins to malfunction and challenges Rio to a Gate Battle.  One of the two.  Of course The Owner accepts the challenge, and once again Our Heroine is forced to defend her honor (and her Gates) against another unwanted assault... except it appears that Gate Battles have a weird structure.  If a person with one Gate challenges someone with multiple Gates and wins, the challenger gets ALL the Gates!  Who came up with that, I dunno, but I suspect it was someone really dumb.  But what will this gambling challenge be?  A no-hold's-barred round of Texas Hold 'Em?  The easy to learn but hard to master blackjack?  The baccarat variant made famous by James Bond, chemin de fer, played in the casinos of Monte Carlo?  A strategy-laden game of craps?  Or maybe a spin on the roulette wheel, winner takes all? 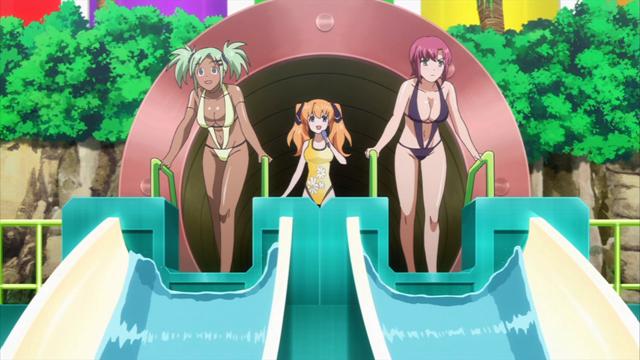 Ah yes, that ever popular casino game, "Race Down The Waterslide."  Why didn't I guess that?  Actually, I did, as soon as they mentioned it in the first part of the episode, just before they showed off the holodeck, and don't think that won't come up in a future episode somehow.  What better way to get most of the female characters into revealing swimsuits, which is the raison d'être for RRG!. 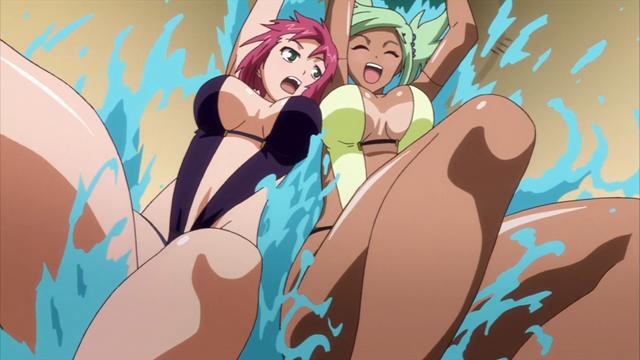 Since this is the waterslide in Sky Resort (A Howard Property), this is no ordinary waterslide, heavens no.  It's impossibly long, has a gazillion different routes, and is computer controlled.  Yes, that's right, Linda controls the waterslide... of course she's going to win!  The end, next episode the show will change its name to Linda Rainbow Gate!, and pachinko parlors around Japan will suddenly have a new pinup girl to celebrate. 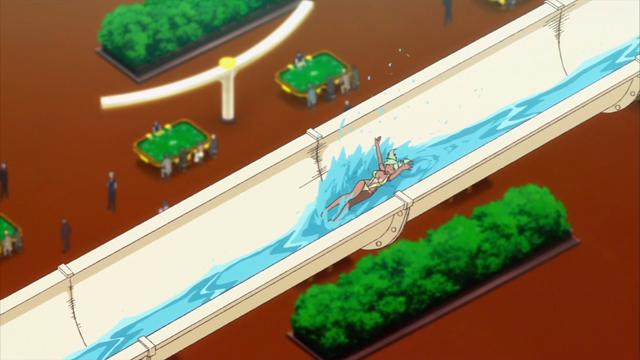 Until Rio ends up lucking into the fastest way down the waterslide: the Sky Route... and if you're thinking what you should be thinking, you're frightened right now.  You're also dead right. 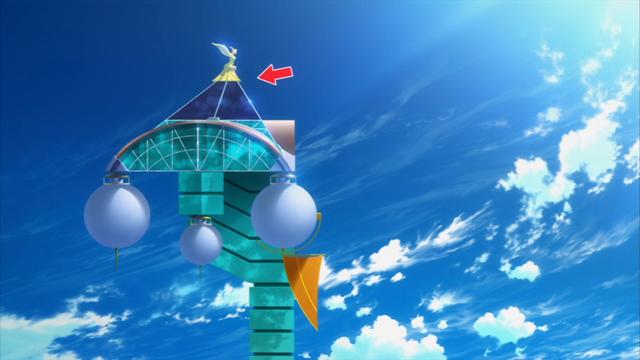 Yep, that's right... Rio is ejected from the side of the building flying building at high velocity.  The inexorable force known as gravity quickly takes hold. 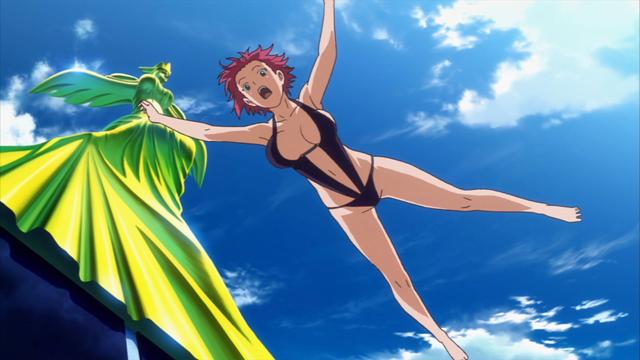 A terrified Rio slams into the side of the Sky Resort with immense force, shattering bones and knocking her unconscious.  Leaving a red smear behind her as her body, broken and bleeding, slides down the glass pyramid, she is launched into the open air when the wall comes to an end.  Her remains are never found. 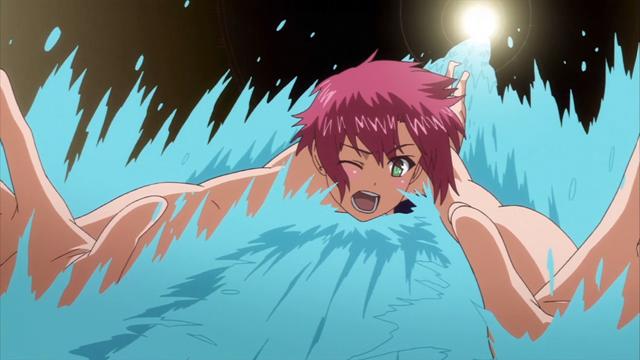 Or... she lands perfectly onto a continuation of the slide, making up a huge amount of time and the race ends in a dead heat. 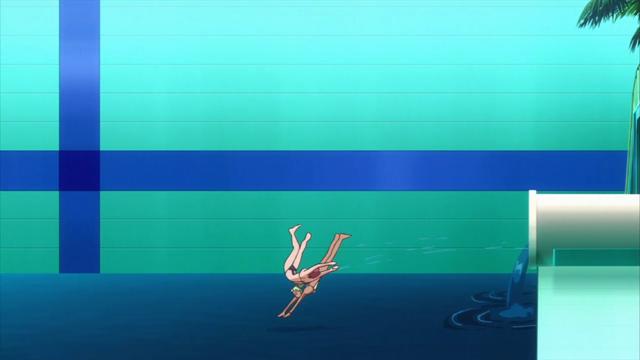 Much to nobody's surprise, Linda's head comes off.  Rio hands it to her, then not realizing the race isn't over yet, takes a few steps and crosses the finish line, winning the third of 13 Gates in the process.  Everybody's happy.  Fade to black, end of episode 05.

I really hate myself for enjoying this awful show so much.  Next week?  Rio... in... SPAAAAAAAAAAAACE!

I really wish I was joking, but that's what the previews look like.

1
I am now convinced that you are making all of this up.

I just haven't figured out where you are getting the "frame grabs".

2 But is she's an android, how did she get the tan lines?

4 We are going to be getting weekly updates on this series, right?