Clannad Collection 1... a review of sorts. 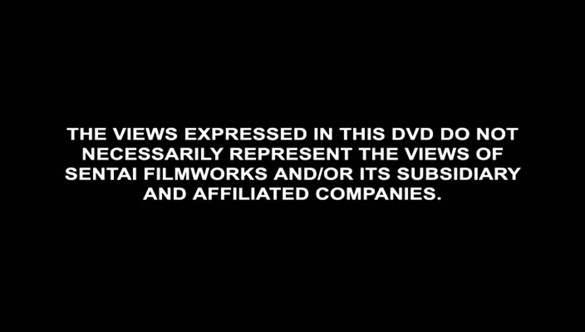 Boy, ain't that the sad and sorry truth...
Let us all face the disappointing fact that ADV as we knew it is long, long gone and probably never coming back.  The above disclaimer, from the first DVD of Clannad Collection 1 (ep01-12), just confirmed it for me.  Even though they supposedly have the license for the show, ADV's logo or name is nowhere to be seen.  Now they're just the "distributors", which is probably a lot like being the Second Assistant to the Key Grip on a movie set: you're involved, but nobody is going to notice your name in the credits... not even your family.

That's a pity, because we've really been spoiled by ADV's productions in the past.  Tons of bonus material, high-quality subtitling, decent dubs, lovely packaging... all could be found on your average ADV release, and none of it is present in Clannad Collection 1.

Understand that I'm a big fan of Clannad, and my past comments on the show (loads of humor, very good story, likeable characters, in some ways better than Kanon '06, yadda yadda yadda) still apply.  Instead of lavishing praise on the show, this "review" is going to savage the actual DVD release.

Let's start with the format: 12 episodes.  That's common for a half-season show, or the first half of a full-season production, yes.  Consider, if you will, Nozomi's recent release of the first half of ARIA the Natural.  12 episodes on four discs (plus another DVD full of extras) in a nice slipcase.  In comparison, ADV/Sentai Filmworks gave Clannad the cheapo treatment: 12 episodes on TWO discs, and the only extras are clean versions of the OP and ED.

As you can imagine, stuffing that many episodes onto a disc has an effect on video quality.  It's not bad, quite watchable.  But in comparison to Kanon '06, by the same production company, there's a visible degradation in the picture... at least to my eyes.

Which brings me to my second gripe: subtitling.  I know I'm spoiled by fansub groups like SS-Eclipse and the lamented a.f.k., but the subs are miserable in this version of Clannad.  No, not the translation; that reads perfectly well (and I don't know enough Japanese to be able to point out that sort of error anyway).  No, I'm talking about something as simple Quality Control.  For example: 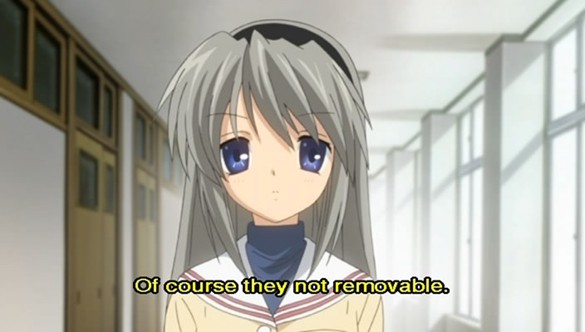 In what professional company would that sort of thing be considered okay?  I've watched the first five episodes, and there's at least one "error of omission" in each.  I've also seen an "affect/effect"-style mistake as well (though not using those particular words; I couldn't find the error as I was taking screenshots for this post).  That's slightly more understandable, but still unacceptable in a professional release.

The next complaint was mentioned by commenter Andy earlier, but not for the same reason that he gave.  This release is subtitle-only, meaning that there's no English voice dubbing.  That's fine; it's a perfectly understandable cost-saving move, and since I rarely listen to the English dub (and only if I'm reviewing a series), I don't miss it.  The problem I have is with the DVD itself: at least on the first disc, subtitles are not automatically enabled!  I've confirmed this on two different players.  Even worse, there's no way to enable them via the menu page... I had to turn them on via the remote (for the TV) or the control panel (for the computer).

The final complaint I have is minor, but telling.  There is no way to jump to episode chapters on a standard DVD player.  For example, let's say you want to watch the second half of the second episode.  To do that, you have to start episode two, then hit the skip button until you get to that chapter.

Taken in all, this release comes off as amateurish.  I've made my own DVDs that seem more polished than this.  I know ADV is cash-strapped, and I should be happy that Clannad has seen the light of day at all, but come on, this is ridiculous.

Some might consider these to be minor complaints.  Well, perhaps, but keep them in mind when you're looking to spend your money on the show.  I'm not going to say "don't buy it."  If you like slice-of-life shows, it's fantastic.  Even those who don't care for such productions (like half of the Duck U. Anime Club) grudgingly admit that it's good.

But ADV's production standards have slipped so far from the days of Azumanga Daioh (translator notes and designer sketches in a seperate booklet for each disc) or Bubblegum Crisis 2040 (their "Essential Anime" budget line put the 24-episode series on six dvds, included all the bonus material, and had reversable covers), it's almost sickening.  If these production values are what we're going to be seeing from them for now on, well, I'm going to have a hard time giving them my money in the future. 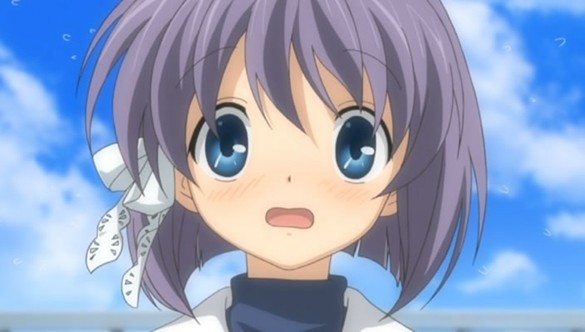 1 Weird that you're having trouble with the subtitles; there's a 20-page thread on the AoD forums about this release and that hasn't come up at all. They worked fine for me, but somehow PowerDVD always defaults to Japanese audio with English subtitles on my system, so that could be covering up the problem.

I'm in agreement with the rest of your complaints, though. Lack of extras in particular--I would have forgiven everything else had they included the seiyuu interviews and commentary tracks from the Japanese LE DVDs. It's attractively priced, to be sure, but then again Nozomi's ARIA boxes are only $10 more at MSRP and you've already drawn attention to the yawning gap in quality there.

2 I got a bad first disc (it locks up in several players during the third and fourth episode), so I've only watched the first couple of episodes. I completely missed those two subtitle errors, but I did notice a few errors elsewhere ("access baggage" in place of "excess baggage", for example). Admittedly, the occasional subtitling error doesn't bug me as much as long as the meaning is correct. I'm only giving them a split second glance, after all.

As for the video quality, I thought it looked perfectly fine... and I was watching it upscaled to 1080p on a TV that's good at exposing bad encodes. A single DVD-9 can handle 6 episodes with no problem, especially given the lack of extras and a single audio track. After all, it's only 2.5 hours worth of material.

Also, the lack of a chapter selection menu was always a common thing on ADV discs. Sometimes, they had them, and sometimes, they didn't. I don't remember Kanon having one, for example.

Anyway, as far as content goes, I was generally happy with what I saw. I've never really cared much about on-disc extras, so their omission doesn't bother me - especially given the price (if I were paying out the nose, I'd probably feel differently). As for the bad disc... well, it happens every so often. Hopefully, Right Stuf will get back to me soon with an RA number so I can do an exchange.

3 Jeff, the "access/excess baggage" is the exact one I was thinking of (and not managing to find).

As far as the bad disc goes, when a company presses 5000 copies of something (number courtesy of a WAG), you've got to expect some bad ones; I wouldn't've counted that as a problem like all the other things I mentioned, simply because sh*t happens.

I loved the extra on the Kanon '06 discs, the "tour of the animation process".  I've gotta admit I was fascinated, and wound up watching those before the actual episodes.  So they're nice to have.  Yeah, I can live without them, but... *shrug*

Andrew, could you provide a linky to that thread?  I'd be interested in giving it a read...

4 "Behind the Scenes" type extras are probably the only kind I actually watch.  I had forgotten about the Kanon release having those.  So, yeah, not getting something similar for Clannad is kind of a drag (assuming, of course, that the R2 release had something along those lines).

And here's the AoD thread I assume Andrew is referring to.  I had posted to it a few times with regard to the bad disc.

Looking at the details of the Japanese DVD release, the lack of extras on this one becomes easier to understand. Like most R2J anime releases, there's a limited edition and a regular edition for every volume. In Clannad's case, the regular editions don't have any extras (at least none are listed on the official website). I doubt the Japanese licensors would consent to an R1 release that was not only much less expensive than their regular editions but also had more content. ADV's release of Kanon (which began in better times for the company) shows a similar pattern--we got the aforementioned making-of featurettes which were included on the R2J regular editions, but missed out on the commentary tracks which were exclusive to the limited first-pressing version.

6 I must admit to a certain amount of schadenfreude.