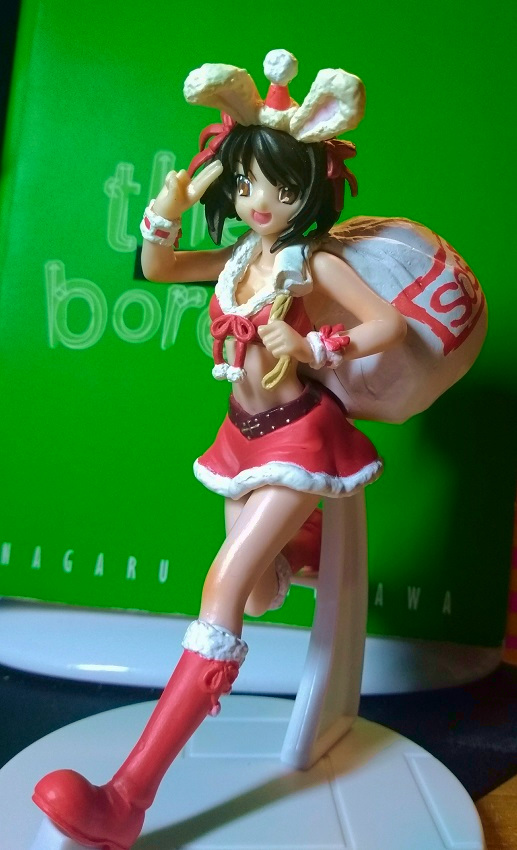 MUCH nicer Christmas than last year's disaster.  Oh, the Christmas itself wasn't the problem, it was the leg injury that occurred for reasons that are still a mystery to me... and that led to me being stuck in bed for 24+ hours.  From there, it's an easily-drawn line to where I am today.
None of that happened this year.  Therefore, it was INFINITELY better.  And it allegedly hit 61 degrees too.  In December.  On Christmas.  In Duckford, IL.  What in the blue blazes...?  In any case... huge thanks go out to Ph.Duck and Rn.Duck for putting up with me for another year, and the annual bottle of lingonberry will die happy soon enough.
And of course, you... the proud members of the Pond Scum.  I've been letting The Pond down over the past year, which I hate but haven't been able to do anything about.  Hopefully, next year will be better in all sorts of ways!  Merry Christmas!!!
I just started playing Fate Grand Order.  I'm fairly sure an opening draw of three lancers (and one of them duplicated!) and an assassin is pretty cruddy.  Welp, we'll just see where it goes from here.

1 I gave FGO a spin a while back, ended up bouncing off of it but that might have had more to do with my chuggy old tablet than anything specific to FGO's gameplay. If you stick with it and need a buddy/guildmate/whatever, let me know. I'll probably have some gacha-game bandwidth available before much longer. Depends on how Crossing Void does long-term, really.
(Crossing Void has my attention probably more for the "Index-verse characters and SAO-verse characters and butterfly chick from Accel World all at once, sweet" value than for anything it actually brings to the gameplay table, I admit.)

2 I'm honestly surprised you haven't tried out Azur - that one isn't so much "up your alley" as it is "let itself in your front door and is camped out on your couch". Though what they did to Mutsu is a crime, just a crime...

3 Well I'll tell ya, Av... I've watched a few episodes of the anime and it honestly left me feeling quite tepid.  I'm not a huge fan of the Iron Sakura (or whatever that fleet is called) character designs, and what they did to HMS Unicorn is a travesty.
It's just a Chinese bootleg of KanColle, only as a 2D shooter.  I mean, I'm willing to be convinced otherwise, but...

4 I don't think "bootleg" is the most accurate way to describe it, as the goal of the game is card-collecting the characters, which predates KanColle. I personally would say it rips off the idea of KanMusu...although even there you have to ask whether KanMusu is a unique idea, or was it just a spin on Tank Girls and Plane Girls, etc.

What is is, undoubtedly, is a cash-in on KanColle's popularity.

I quite like the anime, even with the apparent low budget. It takes a few episodes to figure out what story they're actually trying to tell. I don't know if that's budget, planning, or direction.

5 The anime is not impressive. It's bad enough they're going to delay the last episodes until -March- (presumably in despair of getting a single in-between cel drawn in that time...)
Azur had a few hooks for me: the actual game element is more fun than Kancolle, it's in a language I can actually read so playing it isn't a pain, and I do like most of the character designs. (Unicorn is not one of those, but I do get that they're selling it in Japan, so that sort of thing is going to happen. Would be nice if Warspite somehow got some -pants-, too.) I also know a couple of people who were playing the JP version, and being able to talk shop with friends definitely helps interest in these.
Story-wise, it's a slice over Kancolle only in that they kinda tried; it's not a GOOD story and FGO is going to win out there.
I'll say that FGO has a reputation as a game that is very hard to play as a free player, whereas by contrast Azur is almost absurdly generous (without spending money on resources for ships, I've gotten almost everything from every event).
But in the end it's about whether you think it's cute or not, and if you don't, the rest isn't gonna save it...

6 I think you nailed it, Av...I like the designs, so I'm getting more out of it. Unicorn is one of the big tests, and Nagato and Mutsu (I think they're cute). Doesn't mean I don't like KanColle, either; I do...I just keep the two properties separate.

Now if I could just figure out who Ayanami reminded me of...it's on the tip of my tongue...

7 "Now if I could just figure out who Ayanami reminded me of."
Just in case you're NOT joking, it's Kantai Collection's Speedslut with ears.

8 I wasn't joking, but oddly that isn't what I was thinking at all. Low pigment in the hair, expressionless face, and monotone voice. Add to that the creators have tended to "on the nose" allusions and characterizations, I think she's intended to invoke NGE's Ayanami.