Your Weekly Asuka, Ep11 There's one problem with having a weekly feature that follows a secondary character: sometimes they don't do a whole lot and that makes it hard to write coherently about them. 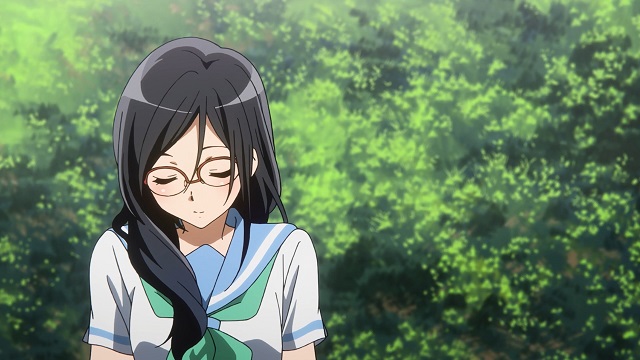 -Hibike! Euphonium, Ep11
Or, as in the case of the Goofy Cute this week, she stays as guarded and evasive as ever.  Even when Kaori asked her point-blank twice who she thought was better suited to play the solo trumpet part, Asuka deftly danced and deflected the question. 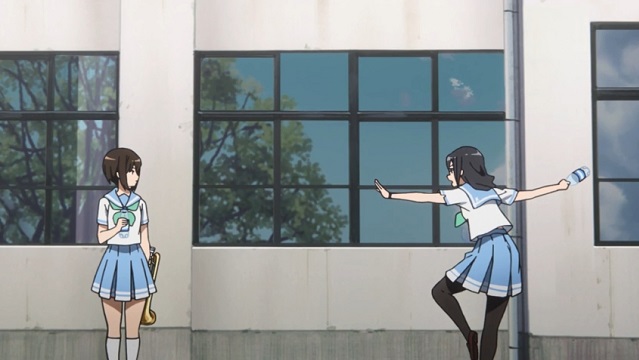 I'll admit that I'm beginning to understand why some people dislike this part of her personality.  I'm fairly certain that she's dodging all the drama intentionally... she knows that she's got influence in the band club.  The last thing she wants to do with that influence is use it in public; she wants the band to sound the best it can.  If that means arranging matters so that there's a second audition for trumpet solo, so be it.  That it'll help her friend, Kaori, is merely a side-note. 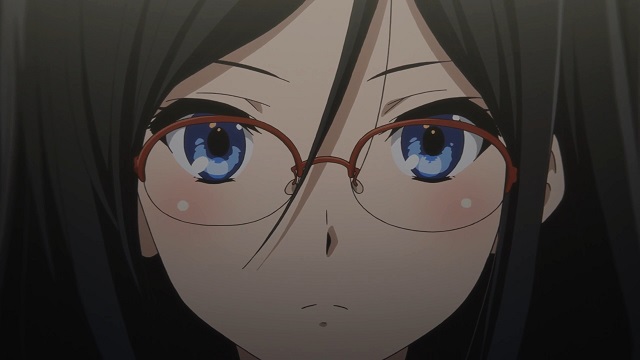 We desperately need an Asuka episode, but with two broadcast eps and an OVA remaining in this season, I'm pretty sure it's not going to happen.  Which means we may never find out what makes her tick, and that disturbs me more than anything right now.  I'm sure Ben's forthcoming writeup over at his place will cover the events of this ep in depth; he actually thinks about the show which puts him a step up on me.

1 Don't know what Taki was thinking, telling the kids to vote by applause when most of those conniving brats are the ones who participated in forcing this re-audition to begin with. No surprise that most of them sat out the voting.

Oh well, doesn't matter, we got That Confession Scene out of it, and that's all I care about at this point.

(Yes, I know it's baiting, I know what happens later in the LN series, la la la can't hear you.)

2 Friend Ben suggested to me that The Conductor did that to intentionally put the band on the spot... and ohbytheway, re-assert his control over the club at the same time.  "You doubted me?  Okay, you guys decide.  Clap, darn you."

3 That would have worked just as well with a blind test, which he didn't do.  I almost would argue that he did it for the lulz, except it was probably just to bully Kaori into acknowledging her inferiority from a sense of her own pride and shame.  After all, she's the trumpet section head, isn't she?  He needs a unified trumpet section more than he needs a superlative solo trumpet.  Orchestra bands are neither democracies nor meritocracies.  The usual resources of a tyrannical band director - cliques of bitchy underlings to enforce the  wishes of the director offstage - aren't available to Taki because A) he's just starting and the remaining second and third years aren't his creatures and B) the band is already a patched-together shattered vessel, which can only handle so much rough treatment.

4 Taki-sensei could have made his point with a blind audition, but I think the band gains something from the open audition.  (Keep in mind I'm looking at everything from the context of the story's universe)

Taki-sensei directly challenged the band to do what they wanted:  pick Kaori regardless.  Unfortunately, Reina was clearly better.  How she played made people look up.  The whole event was used to make the band members decide once again how much they wanted to do well at the competition.  Including Kaori.

Personally, I think Taki-sensei is a jerk, which was proven before with his humiliation of Aoi in front of the entire band.  The entire open audition was a waste of time that ended up making people (Including Reina.) angry, because it almost realized the potential of turning into a popularity contest, and turning students into villains.  Asuka actually had the most level-headed response to the entire fiasco in the previous episode.

Whatever merits Taki-sensei has in terms of music skills (Which is considerable.), a good teacher he is not.

6 Taki went on to change his name to Jim Shooter.
cxt217,  I hang around, although I usually get around to comments threads after the subject's been beat senseless.

7 I think Taki-sensei manipulated the band very well this episode. Firstly he made the audition open so no one could accuse him of trickery there. Then he made the voting by applause, which allows only the most confident and determined people to vote and also allows him to play fast and loose with the numbers because people clap at different volumes. Thirdly he had Reina play second, allowing her performance to immediately overshadow Kaori's. I think he was hoping for a more decisive vote, but he deftly overcame that with his really leading question, just like he did at the first vote on whether they should aim for the nationals or not. Taki-sensei should be a lawyer or something.

Taki-sensei should be a lawyer or something.

He should be expelled from teaching.  I had my fill of jerks in the teaching profession.