Your Weekly Asuka, Ep10 She's back!  The Goofy Cute is back!

-Hibike! Euphonium, Ep10
But only for a few moments, after which she is gone is a cloud of seriousness and puppetmastering.  For as mentioned weeks ago, whatever Asuka wants for the band club, Asuka gets. 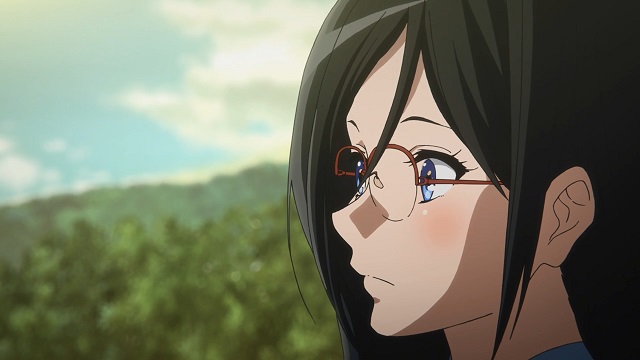 This week, we had drama in that many of the 2nd and 3rd year students were outraged that a first year student, Reina, could possibly beat a popular 3rd year, Kaori, for the trumpet solo honors... to the point that a sense of discontent and back-biting has arisen.  Sides have been taken, with Team Kaori being both loud and sneaky.  Rumors are floated that the Conductor has known Reina for years, and that favoritism played a major part in his decision during auditions.

Kumiko, the POV character for the series, is perturbed by the way the band is disintegrating... and that her friend Reina is the proximate cause of the problems.  She hears Kaori practicing the trumpet solo part, and winds up wanting to find out what Asuka's opinion on the solo situation is.  "No comment", since she's the Vice-President and all.  Kumiko ain't havin' it, so she presses the matter with Goofy Cute, asking for her personal opinion, off the record. 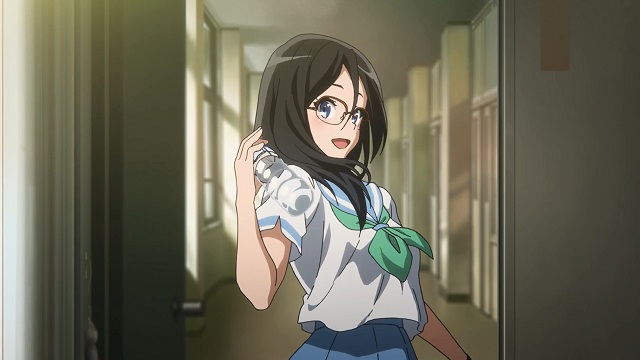 "I don't care.  I couldn't give a damn."  And then she traipses away, leaving an angry and depressed Kumiko behind.  She knows Asuka has an opinion, but there's way too much mask and armor to penetrate to find out what it really is.  Later, the rumor-mongering and backbiting becomes so bad that the Conductor allows for a second audition for anybody unsatisfied with the results of the first audition.  Only one person wants a redo: Kaori, the 3rd Year trumpet player. 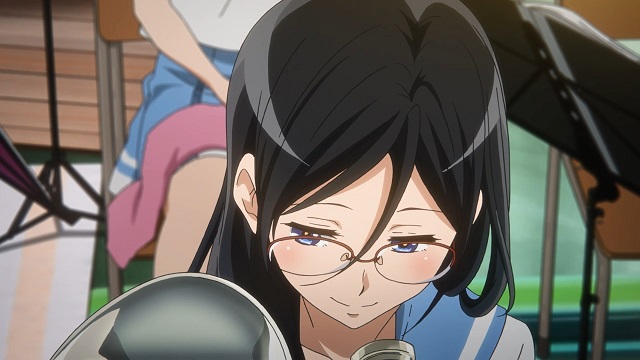 ...and Asuka smiles.  Which leads me to believe that she was the driving force behind the rumors of favoritism.  We already know she's devoted to music.  We've seen that she's extremely knowledgeable about the world of music (for example, when their playlist for the upcoming contest is handed out, she knows quite a lot about the obscure composer that created one of the tunes, just off the top of her head).  We've learned that the Conductor is rather well-known as a music educator, and that Reina's father, a well-known trumpet player himself, has known him for years.  It seems likely to me that this is all information that Asuka would know.  If she was dissatisfied with the results of the solo auditions, she could certainly say something casually where the wrong ears would hear... and the rumors would spread. 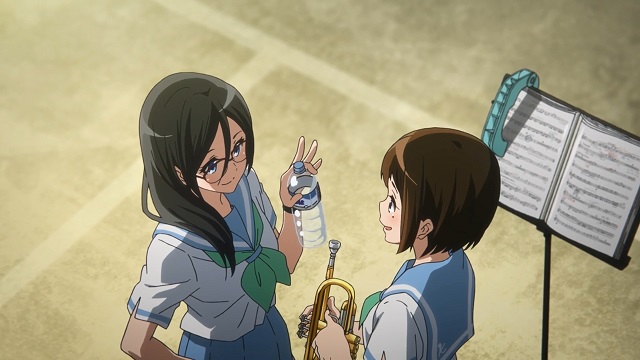 And Asuka gets what Asuka wants.

I'm willing to bet, though, that the audition next week will be done blind, with the soloists behind screens.  The winner is going to be chosen by a show of hands, and if they're behind screens, it won't devolve into a popularity contest.  Mark my words.

1 If been thinking about this.  We know Taki-sensei is really perturbed about the Reina-favoritism rumor, but doesn't address it.  He then seems to hit on the idea of redoing auditions for anyone who wants based on the idea (suggested by the assistant sponsor, in a round-about way) to let the students choose based on who sounds better.  We also get a slight implication that Asuka at least suspects that something like this is going to happen.

Three possibilities I have thought about:  1)  Asuka's intentions are for Kaori to play the solo; which, based on an audition, will *probably* only happen if the students are aware of the performer.  It's been implied over and over and over that Reina actually is a better trumpet player than Kaori, so unless Asuka knows for a fact that the auditions will not be blind, she's gaming only for a chance, not an absolute result.  Unless you add in that Asuka might actually believe that Reina was in fact chosen via favoritism.

2)  Asuka doesn't actually care which player plays the solo, because both of them can play it well.  She's concerned for her friend; however, and knowing or suspecting that a re-do would be done blind, she encourages the situation to develop.  The goal being that Kaori won't have the doubt as to whether she was beaten out by a rigged competition.  It will be a true result that she can accept.

3)  Asuka, as others have hinted at, can't actually stomach getting involved in the politics of this mess and is just trying to keep things rolling without drawing attention to herself.  She encourages her friend, plays her euphonium and tricks on the first years, and answers all questions honestly; which no one believes because her defense mechanism is to act silly and cryptic to keep people guessing and off their guard.

I'm leaning towards 2 at the moment, but 1 is very plausible, and I still think 3 is intriguing.  There is still a real chance Asuka is a lot more of a Broken Bird than we've been led to think.

2 I suspect it's #2 as well, knowing her friendship with Kaori.  Either way, Kaori comes out ahead of where she is now... either she gets the solo, or she knows she lost the solo fairly.  Win-win for her, and Asuka gets her way.

3 Yeah, that second option seems the most likely.

4 Plato said that all students tend to have crushes on their best teachers - except that it's really a desire for becoming one with wisdom and learning, and the teacher is just a symbol. (This would tend to indicate that crushes on other sorts of authority figures are a desire to become one with power, or perhaps with other qualities like experience.)

Greeks being creepy, they thought teacher sex was a great idea. Our society has traditionally taught that students are allowed to have crushes but not actually do anything inappropriate, and that teachers are obliged to ignore them or turn them down.

5 I don't know my Greeks from my Byzantines, but what bugs me most about the Reina x Taki-sensei plot point is that it's actually kind of trope-ish.  From what I can tell, teacher-student relationships aren't actually any more common in Japan than in America, but the idea is treated with slightly less shock and scandal.  The relationship is usually depicted from a generation beyond, however; i.e. a main character will be the product of a student-teacher pairing, rather than the pairing being with any current main character.


From what I've picked up online, any relationship between Taki-sensei and Reina is effectively ignored or removed from the story in the subsequent Hibike! Euphonium books, although there is some question as to whether the relationship would even be relevant to said books.

6 Teacher-student relationships happen in the US, more often than people like to admit.  There's a woman I know (friends with my little sister, her mother's friends with my mother, used to be our neighbors back in the paleolithic) who married her high school band director, word is that they were sleeping together while she was his student. Ironically enough, she was a trumpet player, she inherited my (rather battered) instrument when I dropped out of band.

Of course, she divorced the old bastard a couple years ago, and I've recently heard that she's been living in a long-term lesbian relationship since then, so you can imagine the shades of irony I'm viewing this show through...