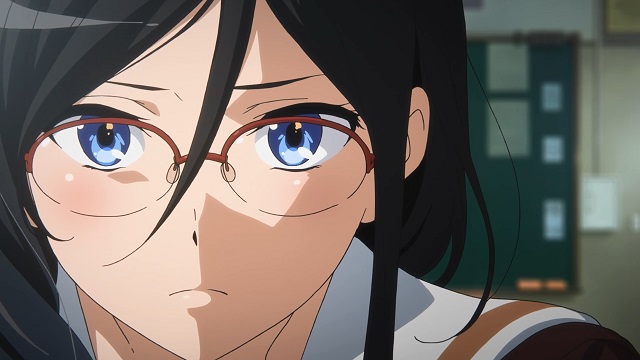 We saw both sides of Our Goofy Adoration this week.  The stern but fair taskmaster alternately teaching and berating the newby tuba player when she was on the verge of goofing off... 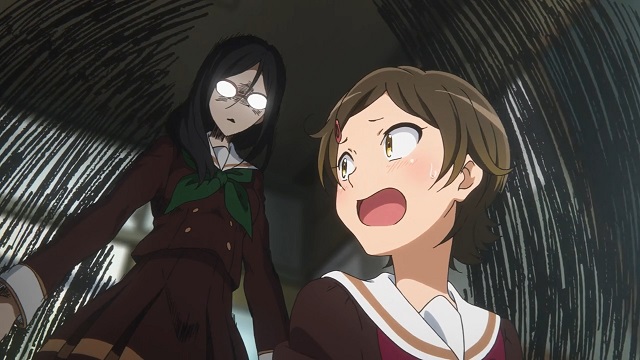 ...and showing that she's got the chops to back up her assertions in addition to being cute and goofy.  She's clearly serious about this whole music thing, despite not being interested in running the band club. 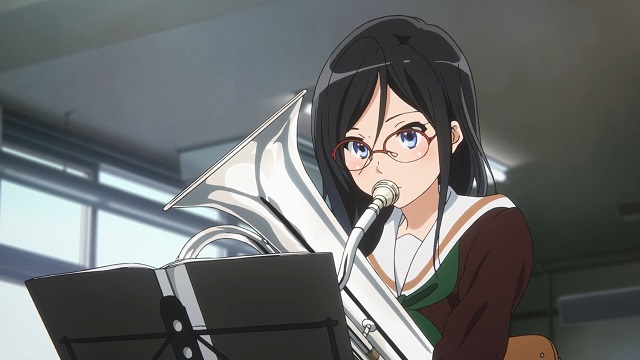 When handed a new piece of music for auditions, she looks at it for a moment, then plays through it smoothly, error-free, and at tempo.  Meanwhile, the main character of the show, who has played the same instrument for seven years, is clearly uncomfortable with playing, tentative and slow.  While the rest of the series spins around her, Asuka is proving to be the person I want to know more about.  Sure, Kumiko, Hazuki, Sapphire and Reina are the main characters, and their relationships are intriguing, and the show is hitting on all cylinders, but I'll be darned if Asuka doesn't steal every scene she's in.  There's something about her, above and beyond the goofy cute, that makes her interesting.  She's not a main character, but she's making a good argument to be one. 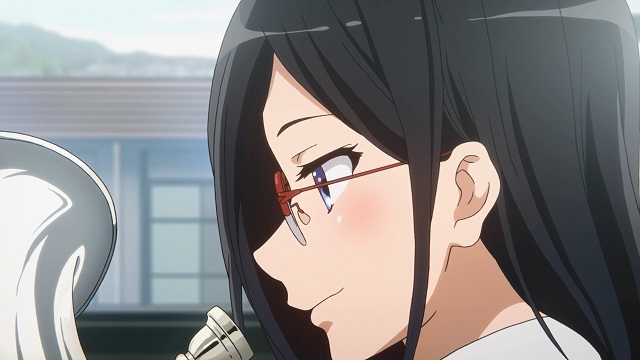 It's clear there's more than 13 episodes in the story of Hibike! Euphonium.  I'm hoping a second season will be announced quickly, and that one of the episodes is Asuka-centric.  I want to know her backstory... for all that I've adopted her as a motif to talk about the series, we really don't know much about her. 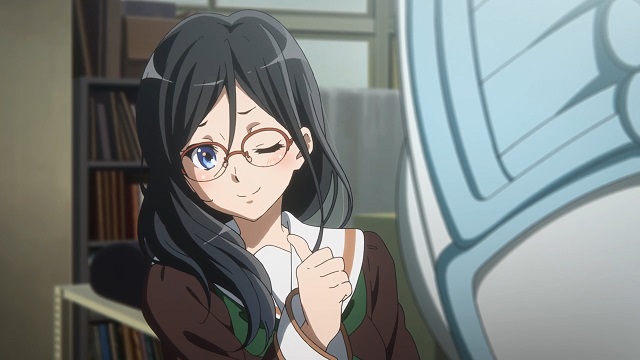 I have a feeling there's more to it than we think.

1 As much as I love watching Asuka, I find Kumiko more interesting, mainly because we can actually see some character development.  We don't really know where Asuka is coming from yet; she's a pre-existing force.  Kumiko not only talks back to Asuka (and get's away with it), she...well, I'll leave that out since I intend to cover it in my write up.

Don't get me wrong; I can't wait to find out more about Asuka, but I'm more looking forward to Kumiko's continuing development and finding out more about Reina.

2 We don't really know where Asuka is coming from yet

Which is why I said "I want to know her backstory."  I've previously stated my love for secondary (or below) characters... don't tell me about Luke Skywalker, tell me about the cleaning crew on the Death Star.

No....Just no.  As much as I like Asuka, there is (Sadly.) a maximum practical limit to how much humor I can accept from her.  I am glad she is not the president of the club.  And frankly, the last thing KyoAni needs right now is a series that goes down this path again.

4 I consider Asuka a main character at this point; she's at least as important to the plot at Reina is, and more-so than Sapphire and Hazuki.  The story could be flipped around and told from Asuka's point-of-view.  She's actually causing things to happen rather than just react.
"...the last thing KyoAni needs right now is a series that goes down this path again."
I admit I haven't watched every series KyoAni has produced, but you lost me with this.  What path?

5 ...there is (Sadly.) a maximum practical limit to how much humor I can accept from her...

Like that humor-filled Asuka of Ep05 (SunFes Drum Major)?  Or the wacky Asuka of Ep03 (We Suck, So Asuka Takes Charge)?

There's more to her than a eye-poking gag-a-minnit happyslapper.  She can be that, too, but other than a constant touch of the irregular ("Adios, Amigos!"), she has the ability to be serious when the need arises... and as we've seen, it has arisen repeatedly.

Not to sound creepy, but I'd like to know what she's like when the camera isn't on her.  Is she a loving daughter?  A diligent doer of homework?  Messy?  Does she have a rubber duck, and I swear, if anybody should have one it's her.  And so forth...

6 I"m liking this series a lot, and I don't usually watch non-scifi series.  Two things:
The club advisor scolding them and correcting them with a smile on his face.  I've never known anyone that didn't get a little upset when trying to bring a group.  He interesting.  (And I just started Ep 4)
What was with the skirt thing?  Were the girls getting called on rolling the tops of their skirts up to make them look shorter?

7 Re: skirt thing -- Yuppers. Just like the Catholic girls of yore used to try to shorten their skirts, the Japanese girls of today often try to turn their sailor skirts into miniskirts. There are several practical and social reasons why that's not a good plan, but it's also a violation of dress code. I'm sure that in real life they get called on this by teachers, but it's the first time I've seen that particular dream-bubble get burst on screen.

Re: the incredibly cheerful director - Yeah, I've had a choir director like that (at a workshop). He was a really good guy and had an infectious love of music, so the criticism felt particularly strong.

OTOH, this guy is pretty much always smiling when he's "on," and sometimes in Japanese society that means serenity (or nervousness trying to be serene). But maybe he's just not surprised by any stupid thing that band kids do, because he's seen it all.

8 I'm curious about the "smiling demon." There's a line dropped (in an earlier episode, I think?) about how he's never mentored a band before, or something to that effect. But he seems to be quite capable, something the kids are starting to realize, along with the fact that he is not even in the vicinity of screwing around, here. I like his attitude of, "you can either screw off OR you can take this seriously, there's no AND."