Voting Is Now Open That's right, you read that correctly.  I have an urge.  I have a need.  I have an itch, which the doctor gave me an ointment for but never mind that now.  I have... a hunger.  I must do my annual episodic series recap.  Two years ago, it was Ga-Rei Zero.  Last year, Rio Rainbow Gate! was both my muse and my bane.  And now, it is time for me to strike whimper suck recap again... and I'm going to let YOU, my endearing readers that I lovingly call The Pond Scum, vote on what series I'll do.  Here are the candidates:

High School Of The Dead 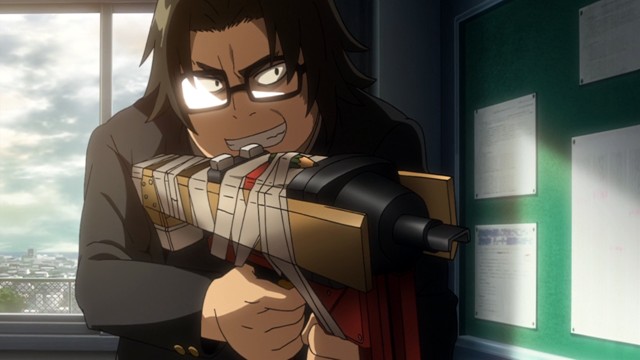 Zombie Apocalypse meets Japanese High Schoolers in a fight to the death... undeath... whatever.  Great action, hideously top-heavy female character designs, comedy... what's not to like? 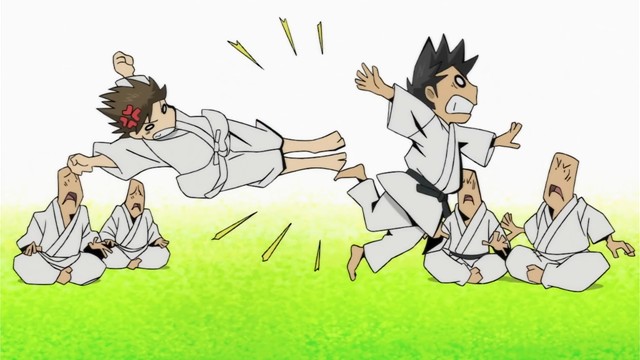 In the not-too-distant future (next Sunday A.D.), the Government cracks down on books and magazines it deems offensive.  Naturally, the nation's librarians take up arms against the oppressors.  Or something like that.  Not terrible art, some fun times, action, romance... what's not to like? 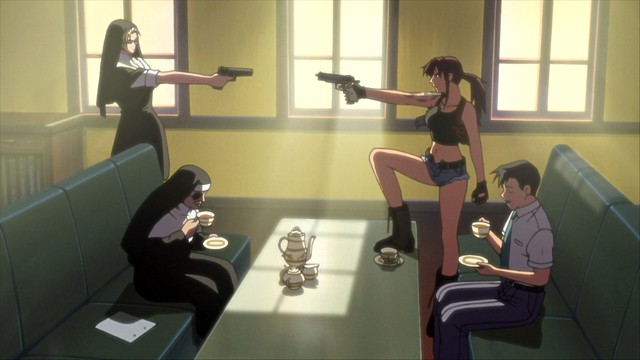 The times are grim.  The times are dark.  Nuns and maids are heavily armed.  And everybody has a toothache.  Violence, awfully black humor, good art, and you see a helicopter shot down by a torpedo.  For what it's worth, the seiyuu for Revy, Megumi Toyoguchi, has a voice like liquid sex... not that you'll be able to hear it on here. 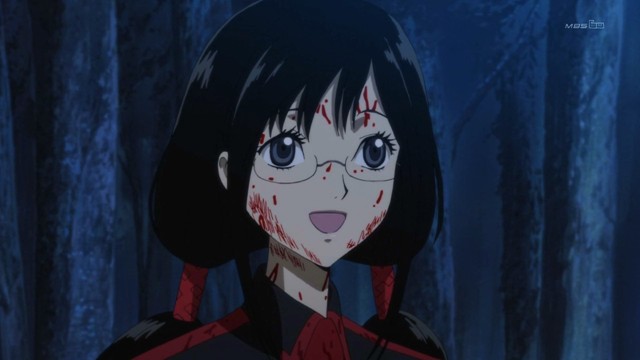 Schoolgirl is a little klutzy, a little dim, quite friendly, and able to kill everybody within a 50m radius using her sword without breaking a sweat.  Fortunately, she's just a demon hunter.  Or is she?  Bwahahahahahahahaha!!!  The most recent show of the four, it's got the best art and the worst hairstyle I've ever seen (see above).  Also: grim, dark, toothache.  Or is it?

So those are your choices.  Consider them wisely, for your mind may be at stake.  Mine is already forfeit.  Balloting is open until 1159pm Sunday, March 4th.  One vote per reader (unless you're from Chicago).  Leave your choice in the comments.  No write-ins.  The top rung is not to be used as a step.  Huh, will you look at that: "breach hull, all die."  I even had it underlined.  Make your picks, place your bets!

2 High School of the Dead

3 Gotta go with Black Lagoon. Would you be doing both seasons?

6 What part of "hideously top-heavy female character designs" are you guys having a hard time understanding?

7 I've seen Black Lagoon and HSotD, and while it would be fun to read your review of either, I'd rather see your review of something I haven't. So I vote for Blood-C.

8 H.O.T.D. is the only possible follow-up to Rio.  Black Lagoon, for all that I liked it...mostly... well, the second season involves taking a hammer, and pounding yourself in the nads with it.  Repeatedly.  It's not bad... it's just damn brutal.

9 I've seen part of Black Lagoon and found myself worn down by the grimness and I didn't even get to the 2nd season. I think I have to back Steven up on his vote, here: HSotD.

As an aside, I also picked up a DVD of the MST3K movie ("I calculated the odds... then went ahead and did it anyway"). Unfortunately it's the cheapest rendition of anything ever; the DVD itself is actually sticky due (apparently) to the misapplication of adhesive for the disc's label, or something. Ugh.

10 GD, perhaps you're right about us being related.  The first DVD I ever owned, even before I had a way to actually play it, was MST3K:TM.  Mine wasn't sticky though.

11 It's not the best show listed there, but honestly, Blood-C is probably the one which would be most "interesting" to write/read about...

Believe it or not, it has some good character development in it.

13 I enjoyed Lagoon alot, but if you are to do my bidding, I want a review of something that I haven't seen.  I vote for "High School of the Dead".

15 I vote for HSotD on the grounds that it probably does the best of combining the natures of your two previous reviews in one show.

(Blood-C would be a more pure Rio experience, but you already put yourself through Rio once for our sakes.)

17 Black Lagoon is the only series I haven't seen which would make me lean towards it but I'm going to vote High School Of The Dead because I think that will be the most entertaining to read.