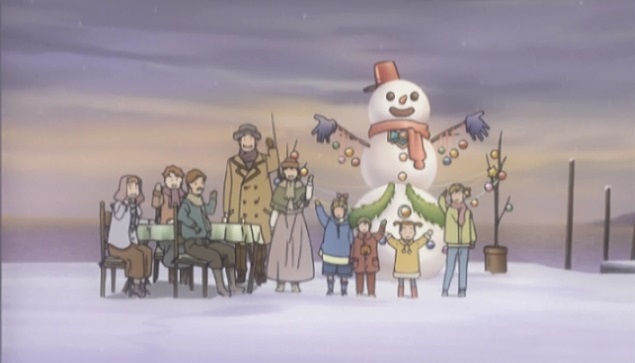 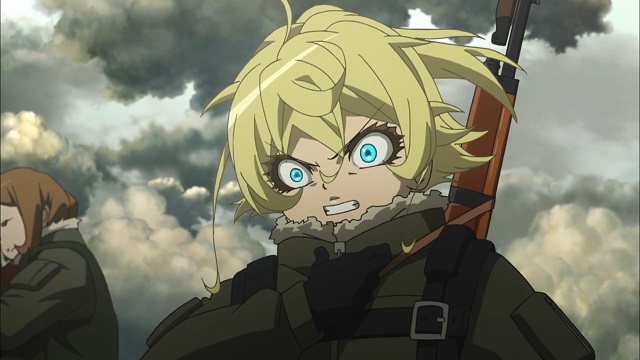 Longtime reader Avatar told me to watch this during a late-night chat while playing World of Warships.  Actually, it was more like he ordered me to watch the show, but for the most part I trust his taste in anime.  Anyway.  He described Youjo Senki as "crossing Strike Witches with World War I, but with pants."  And for Episode 01, that's more or less right, but only superficially.  Magic is real in this fiction, and the two sides involved in a war use their magic users as "special units".  With the ability to fly (with a leg-mounted device that's magical, but not jet or prop-powered), they do well at recon, and putting a magical charge into their rifles turn them into devastating attackers.  Magic users seem to have replaced airplanes in this version of WWI, come to think of it.  That little girl with the angry expression is Tanya.  She's approximately nine or ten years old, and she appears to be one of the most powerful "German" magic users.  She is also violent, ruthless, cold-hearted, and totally callous... and that's to the magicians under her command!  You can only imagine what she's like to the enemy.  Turns out there's a good reason for her to be so nasty... she's actually a male Japanese HR staffer in his mid-30s.  Seems there is a God after all, and when our alleged "hero" is pushed in front of a train by a man he just fired, he gets a chance to discuss matters with the All-Powerful Being.  He succeeds in pissing off God, who reincarnates him... as an orphaned baby girl, but with our hero's mind included intact.  And that is the start of "The Saga of Tanya the Evil."  Animation is good, voice-acting is acceptable, the concept works, and the production staff seems to enjoy extreme reaction faces. 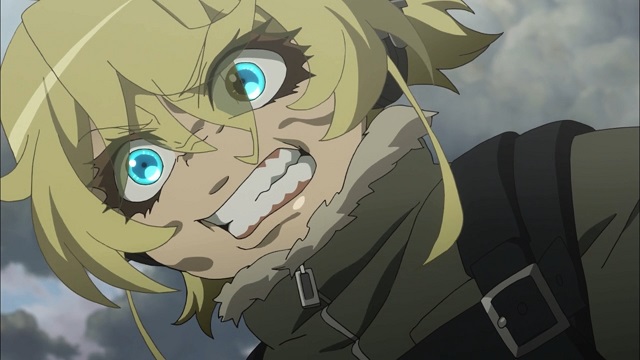 The problem with the series is that Tanya herself is so (pardon the pun) god-awful that I'm watching just to see her inevitable downfall.  Eh, at least it's a reason.
Status: Watching 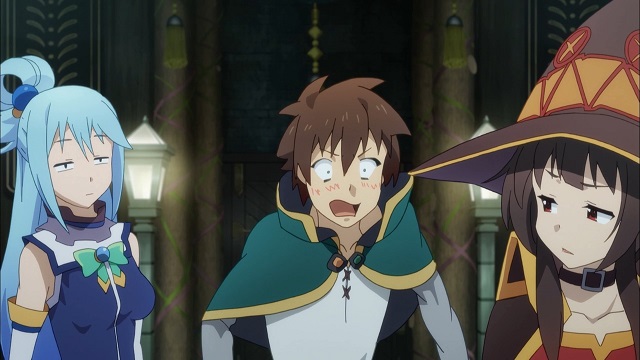 When I reviewed the first season of KonoSuba, I was decidedly mixed on the show.  "It has its moments... there just aren't enough of them for me to recommend" was the final judgement.  The second season picks up right where Season 1 ends for all intents and purposes.  Nothing has changed, it's exactly the same show... and for me, that's a problem.  I didn't like the tack the humor was taking, with our hero being called a pervert or sexual harasser constantly.  S2 kicks that stuff up a notch in the first episode, much to my annoyance.   It may turn out that KonoSuba 2 is the greatest show in the history of the medium, but I won't know because I won't be watching.
Status: Dropped 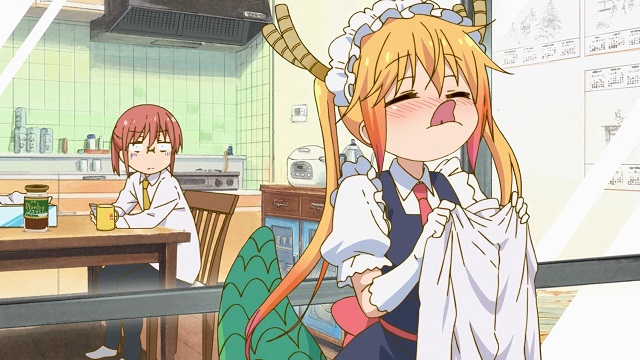 If nothing else, Kobayashi-san's Dragon Maid is noteworthy for featuring actual adults as the main characters.  Kobayashi is a computer programmer for a company, and she'll tip back more than a few beers with the guys after work.  One night, deep in her cups, she staggers into the nearby forest where she bumps into a dragon and has a long conversation, ending with an invitation to stay with her.  The next morning, hung over and movin' slow, Kobayashi opens the door to her apartment and... dragon!  Biiiiiiiiiig one!  Fortunately the dragon, named Tohru, can convert to human shape... mostly.  Hijinks ensue, mostly involving Tohru being Kobayashi's maid. 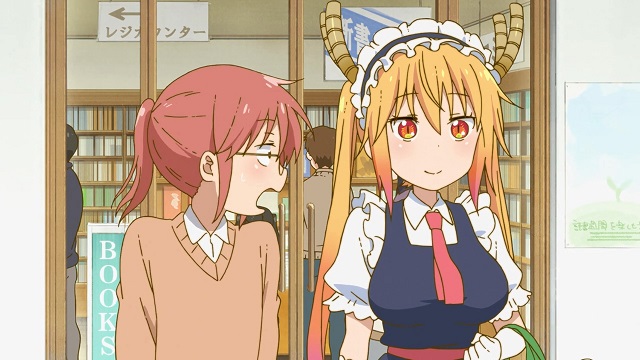 There's a refreshingly sweet relationship forming between the two of them.  I mean, beyond Tohru's over-the-top devotion that is.  There's more here than just "oh she's a dragon hyuk hyuk hyuk".  What isn't here is a lot of laughs.  Sure, there are sight gags (how does a dragon cook?) but I've been surprised by the depth lurking under the surface when we've had a chance to glimpse it.  Kyoto Animation is running the show, and they've done a good job of capturing the look of the source manga.  It's not ridiculously pretty, KyoAni's signature, but it's hardly off-putting and more realistic-looking characters would work poorly.  There are signs that the show might devolve to "dragon of the week", however... and it's not good enough to survive that.
Status: Watching with some reservations. 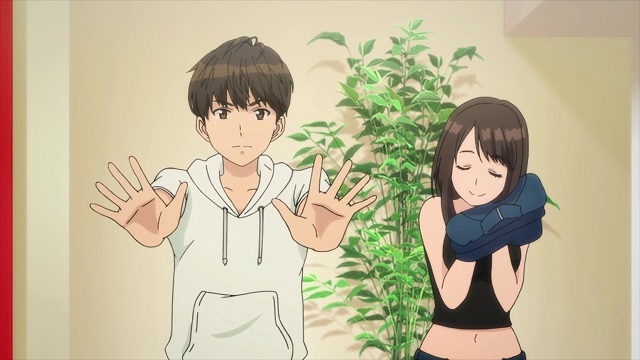 The important thing to realize about Seiren is that it's an omnibus romance.  There's three main girls, and each of them will get to be featured for four episodes... but there's no overlap between them.  Let's say the first day of Ep01 is June 1st.  The first day of Ep05, the first one for the second girl, will be June 1st again.  It worked very well for Amigami SS, but to pull it off you need two things.  First, you need a male protagonist that's actually likeable.  The other thing is that you need to have three girls distinct from each other, and likeable in their own right.  Some series have problems getting one female character right.  As I write this, the fourth episode has come out, meaning next week will start a new girl, and the show may continue to be good... or it may go straight off the rails.  If this sort of thing sounds interesting to you, or you liked Amagami SS, which Seiren is a not-a-sequel to, then I give the show a thumbs up, understanding that it could change.
Status: Watching carefully. 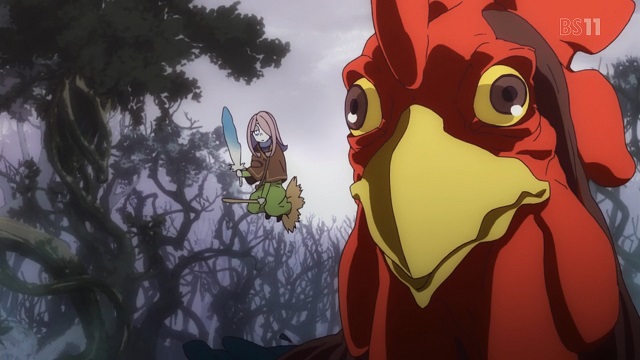 I loved the original OVA.  I enjoyed the movie.  The TV series should have been a slam-dunk for me... and it wasn't.  Why not?  Well, as far back as the OVA I've noticed a distressingly nasty side to the show, where nobody but the one of the teachers (Shiny Chariot herself) is likeable, and that includes the main character.  In the movie, witches are discriminated against, "normal" people are looked down upon by the witches, and everybody hates Akko, the lead.  Stereotypes abound, and while there's been fun bits, it's always been there, nagging at the back of my mind.  Then, in the first episode of the TV series, one of the "lead trio", Sucy, actively tries to kill the other two.  That's not what I signed on for, and the entertaining art style isn't enough to keep me coming back.  I might be the only person who doesn't like LWA, but there you are.
Status: Dropped, with regret. 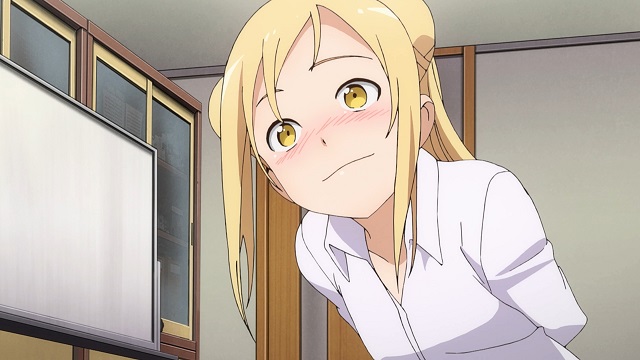 The most realistic look at high school ever is brought to you by a series starring a vampire, a dullahan, a "snow woman", and a succubus.  Yeah, I know.  Bear with me.  "Monsters" in this series are genetic mutations, still mostly human but with something extra.  Vampires, like Hikari above, don't need to drink blood (and those that don't are looked upon the way "normal" humans look at vegetarians), enjoy tomato juice, only dislike bright sunlight, crosses and garlic are just things, so on and so forth.  But vampires do drink blood, and the government provides them with a monthly amount.  That sort of thing. 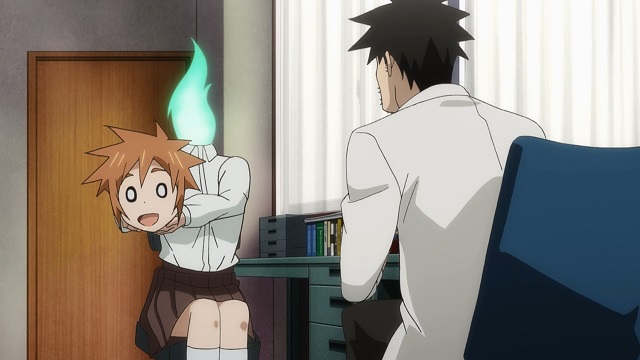 But I'll be damned if the show doesn't have a serious side to it.  It's done a great job of showing us the problems these "Demi-humans" have in society, and that they're just kids otherwise (well, the succubus/teacher isn't, but you know what I mean).  That they all have a thing for Takahashi-sensei, a biology teacher who wants to learn more about Demis, is a little disturbing, but at least he hasn't shown reciprocal interest.  Animation is good, but the writing is top-shelf.  I laughed out loud at the popular vampire practical joke, for example (sneak up behind someone, poke them in the neck with two pencils while making a "chomp" sound).  If the series keeps up like this, it's going to be the series of the Winter, if not the whole year.
Status: Watching Eagerly.

So there you have it... what are you paying attention to?