The Polls Are Now Closed The votes are in.  The Pond Scum has spoken.  The next series that I'll be doing an episodic recap for is High School Of The Dead. 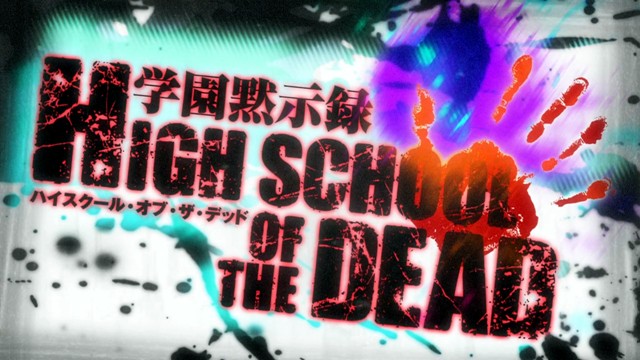 This is Wonderduck's complete lack of surprise.

Considering that it was my favorite show in 2010, this will hardly be a chore.  Don't get me wrong, it wasn't the best anime series of 2010, just the one I enjoyed the most, the one I most looked forward to watching.  Considering that Season 3 of Hidamari Sketch ran that year, as did Amagami SS, Sora no Woto, Strike Witches S2 and Ikkitousen Xtreme Xecutor, all of which I greatly enjoyed, that's really saying something.  Heck, I'm even reading the manga for HSotD as well, and I don't read all that much manga.

However, I will say that this wasn't the show I hoped would win.  If I hadn't of opened the choice up to voting, I probably would have done Blood-C.  There's a lot more train-wreckage in that one, though it did all make sense... eventually.  I may even still do it sometime down the road.  Alas, only DiGiKerot and David voted for it.  I'll admit that I threw Library Wars into the mix because I actually enjoyed the show; yes, that's right, I was one of the few.

Which brings me to Black Lagoon.  It's outstanding.  It's one of the best anime series I've ever seen.  It's also grimmer than the Warhammer 40K universe.  It takes a lot to make the Zombie Apocalypse seem light and fluffy, but in comparison to Black Lagoon, pretty much anything is cotton candy and unicorns farting rainbows.  Having said all that, it might have been interesting to recap, but all in all I think I'm glad it didn't win.  Though, it is a shame I won't get to say anything officially about this scene: 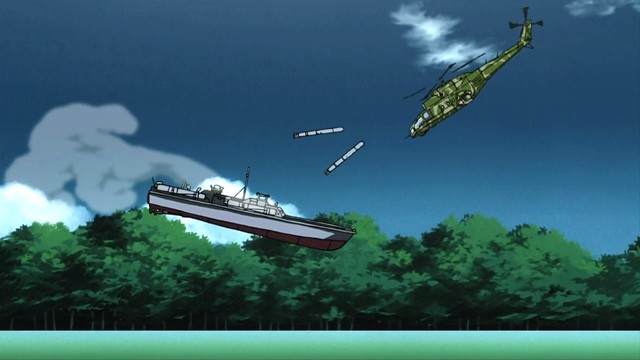 ...because it's an Elco 80' PT boat firing two Mk8 torpedoes at a Mi-24 "Hind" helicopter, and you just don't get much of a chance to say things like that very often.

2 Rats. I got that wrong. Shoulda been just "meitou!" (It means "right answer".)

3 But is saying 'an Elco 80' PT boat firing two Mk8 torpedoes at a Mi-24 "Hind" helicopter' as much fun for you as saying 'laser weasels' ?  Hmm...could a show be created that had both?

4 No.  Laser weasels are in a whole different class of 'fun'.

Lord, I wish I could have shewn that scene to my grandfather. He was part of the crew that developed the Whitehead Mk 8, back before the War... and his immediate reaction would have been to tell us exactly what was wrong with that picture, and why. And he'ld have been right...

You've got me remembering him, now...

6 Edward, then The Pond has been good for something.

If the first thing your Grandfather said WASN'T "the damn PT boat is flying," there would have been something wrong.