The Next Series: Nominations! Well... the episodic reviews of High School of the Dead were a success, I think.  What the heck, lets do it again!  Last time, I chose the series you got to vote for... this time, I want your help!  Give me the name of two series that you'd like to see me bring my special brand of reviewing magic to in the comments.  I'll compile the list, add a couple of titles to it, THEN open it up for voting. 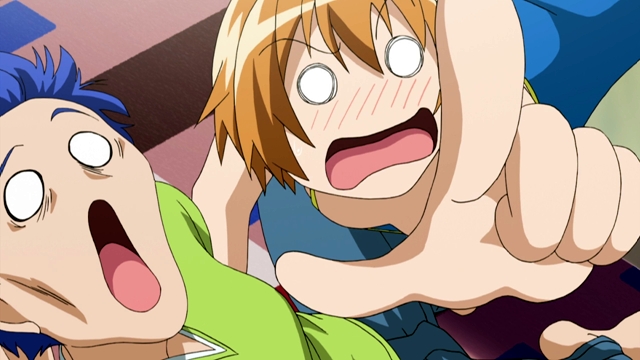 There are a few restrictions, though.  I'd prefer 12 or 13 episode series over 24-26 eps.  They need to be easily obtainable.  I'm not opposed to older series, but I find newer "widescreen" series to be easier to work with, picture-wise.  I'd also really like a show where things actually occur; I love the ARIA franchise, for example, but doing one of my episodic reviews for any of the three series would be pretty much impossible.  Nominations are open until 10pm Central Pond Time on Friday, July 13th.

Well, then..Queens Blade 1 or 2.
2 is probably the better bet re: material and things occurring.

2 It's gotta be Medaka Box!

3 Since this is a Wonderduck episodic review, there needs to be a certain amount of fail present in the series.  I don't think something like Bakemonogatori, or Mahou Shojo Madoko Magica is quite right, much as it might be fun.
How about High School DxD, Sankarea, or maybe Ore no Imouto?

4 If he rejects Medaka Box, I could go with High School DxD...

5 I suggest the current summer anime Jinrui wa Suitai Shimashita  which reminds me of FLCL, but with more plot and sarcasm.  Several anime sacred cows are bludgeoned, including the UN, corporations, cute fairies, noble villagers and victimized meat animals.

6 Wanna take over for me on Deadman Wonderland?

8 Hell, Pixy, if we're going to ignore his preference for a short series, I'd request Star Driver. Princess Tutu is great, too great for Wunderduck's MO - he needs a little trainwreck in his anime to make his process work, you know?

We could be nice to Wonderduck just this once.  Moyashimon, Potemayo, Midori no Hibi, A Channel, Ano Hana, Zettai Karen Children...
I know!  Bleach!

11 If we hated Wonderduck and wanted him to suffer, we could pick Chu-Bra.

15 Skyhack, I've got 'em.  And as far as Nazo no Kanojo X goes, no need for me to do it, 'cause friend Mauser has that covered nicely.  I might be able to equal him, but I wouldn't be able to improve it.

I never got far enough to find out. I bugged out after the episode in which the girls were firing live ammo at each other.

I think that was also the episode in which M16 was shown washing every part of herself extremely thoroughly.

22 Dude..If we really hated Wonderduck and wanted him to suffer we'd recommend Song of Wind and Trees