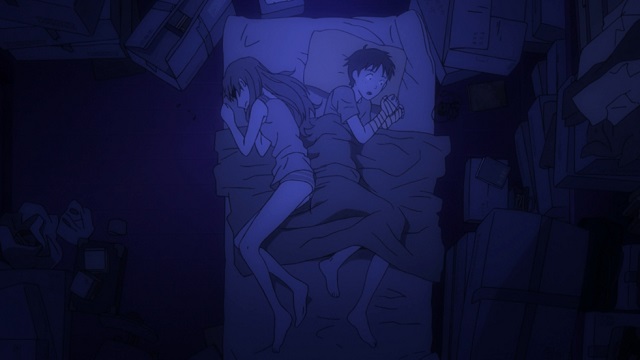 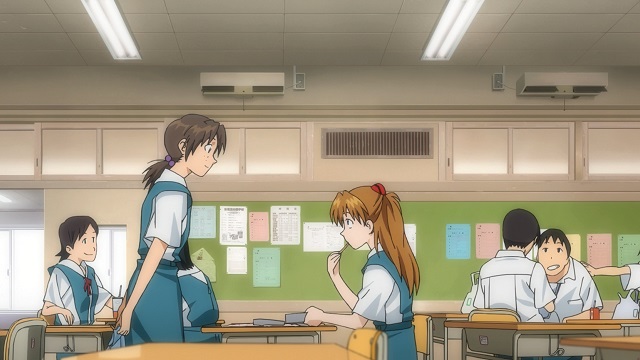 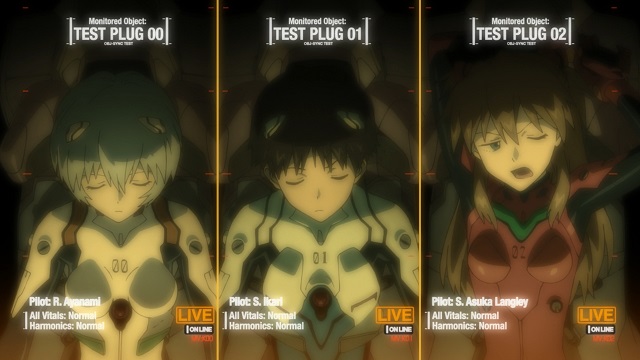 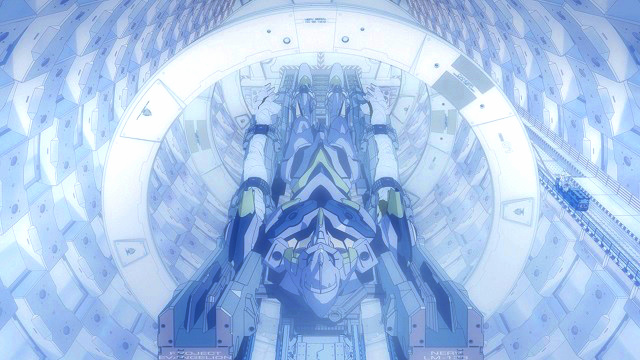 Eva-01 is in a Giant Grumbling Donut of Doom, so you know the damage it suffered against the last Angel was bad.  In fact, it turns out that all three Evas were so badly beaten up that NERV doesn't have the spare parts to repair 'em all.  I suppose you can't just run down to the local AutoZone to pick up a Eva tie rod.  To be fair, though, I've never tried.  Anyway, Eva-00 is going to get the short end of the stick and not be repaired.  Can you use an Eva as spare parts?  Would that be organlegging?  Back at school... 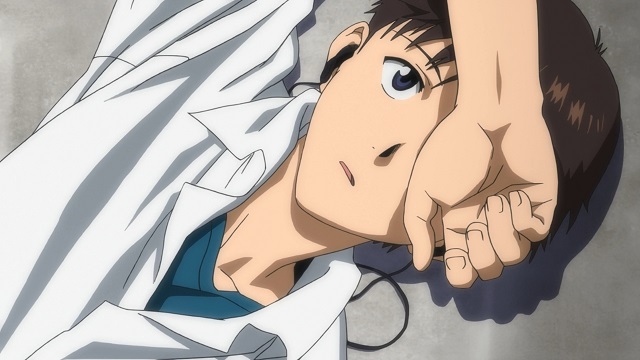 ...Shinji is being a loner, as usual.  He's up on the roof, listening to Queen (because every cassette eventually turns into Queen's Greatest Hits) and doing #justshinjithings.  In short, though he's saying nothing, you just know he's whining about something.  A sudden passing shadow catches his attention, drawing him to his feet. 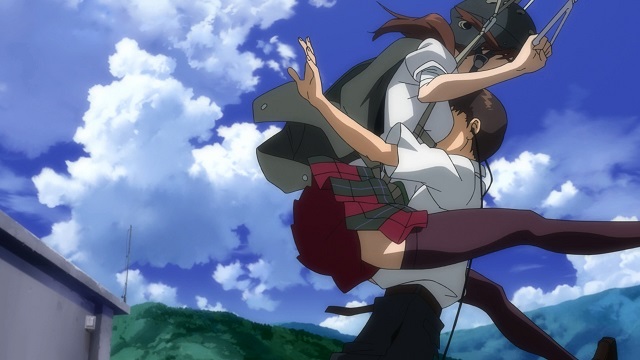 ...I need a ruling here.  It's certainly not a punch in the face, but it does involve things impacting Shinji's mug.  I'm inclined to say she like him, probably because they haven't met yet and she doesn't know him. 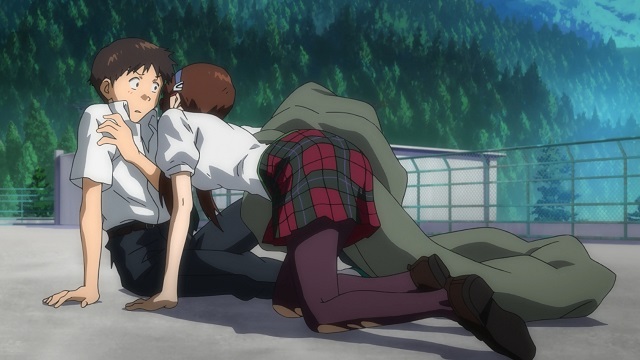 One thing she does know is the smell of LCL fluid... and she likes it.  Yup, Shinji's soaking in it, and ladies and gentlemen, Shinji has another friend.  Dammit.  Oh, who is she?  I'm not surprised you don't remember, we haven't seen her since January of 2014.  Her name is Maki, she's working for some organization that isn't NERV, she's been inserted into Japan covertly (because parachuting onto the roof of a school is covert), and as quickly as she arrives, she's gone again.  At least we know the new character's name now.  Later... 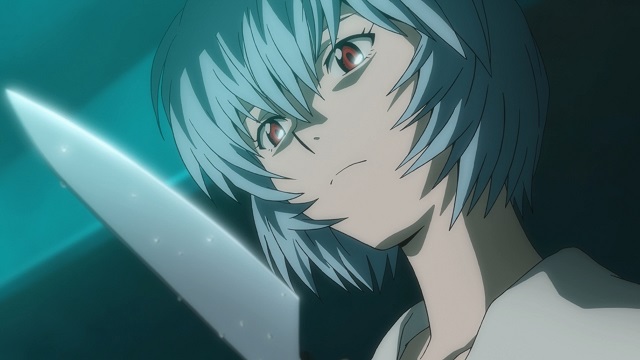 ...Teh Rei is ready to shank a bitch.  Or, she's learning how to cook, one of the two.  Seems she wants to throw a dinner party to bring Shinji and his father, Gendo Plushyferret, closer together.  Or she just wants to stab Asuka.  I'm not sure which one I'd rather, to be honest... this new Asuka really is a boor.  Meanwhile... 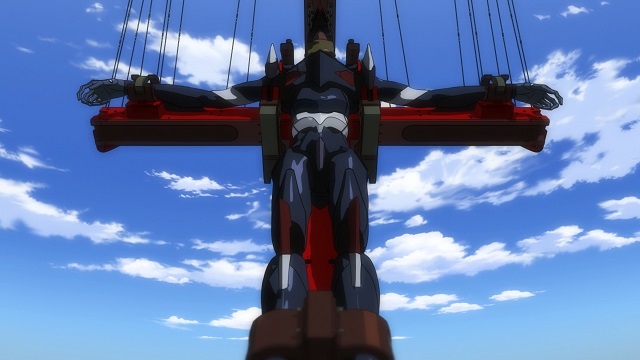 ...no symbolism here, uh-uh, nope, don't know what you're talking about.  Symbolism, naw, I don't see none o' that.  This is Unit-03.  It was normally based in America, but after a disaster that consumed Unit-04 (and most of New Mexico) the Americans decided "we'll let the Japanese activate it."  Because you only get one New Mexico per country, and the US is fresh out.  But who's gonna pilot it? 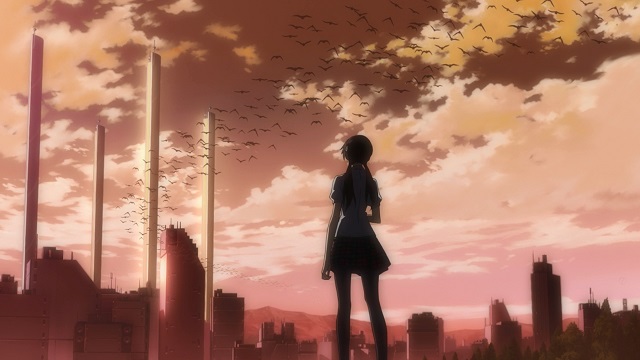 Oh yeah, there IS another Eva pilot, isn't there?  Subtlety, thy name is Evangelion.  Except there's a snag... see, there's something called the Vatican Treaty that only allows a country to have three active Evas at once... 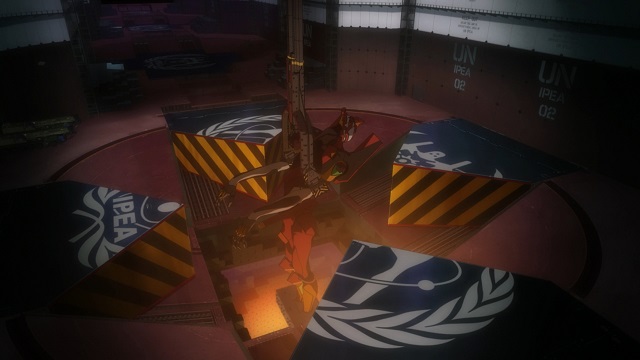 ...so for whatever reason, they're sealing Unit-02 in carbonite, instead of the badly damaged and possibly unrepairable Unit-00.  There's some technobabble about how -02's license is held by Europe, and is there a driver's test to get one of those?  Do you have to parallel park an Eva to get a license?  Do traffic laws apply to something bigger than many buildings that under the right circumstances can turn the population of the world into orange tang, and what traffic cop would pull it over?  These are the important questions only The Pond dares to ask.  Anyway, Asuka is somewhat het up over all of this, since she's apparently grounded now.  Since her entire self-worth is tied up in being an Eva pilot, she's not reacting well. 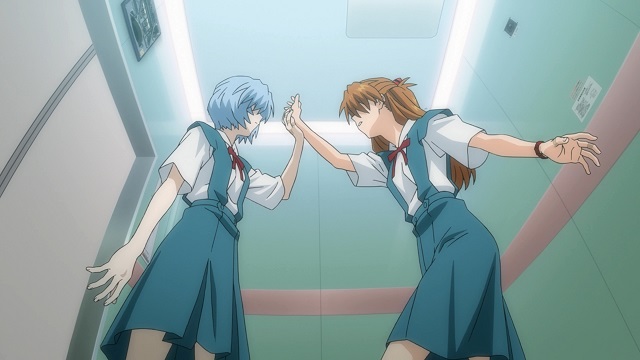 She even tries to take it out on Teh Rei, who's all like "Oh no you dint!  You did not just pull that bushleague crap on me.  I am gonna hafta shank a bitch."  She'd do it, too.  Turns out the friction between them is totally Shinji-related: Teh Rei feels all warm and fuzzy when he's around (naturally, since she's hit him in the face), and Asuka is too tsun, not enough dere.  You can't crawl in bed with the guy without hitting him in the face, it's just that simple.  Meanwhile... 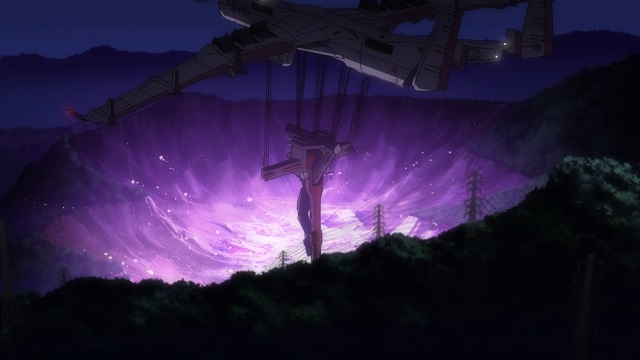 ...Unit-03 has been delivered to Japan.  Finally.  Turns out they got lost around Guam and delivered it to Madagascar first, only to find all the ports and harbors closed.  After thinking that  Port-aux-Francais was Japan, they eventually figured out that Japan is much larger and far away from the Antarctic.  THEN they got it right.  Anyway.  In their infinite wisdom, NERV has decided that Asuka will be the test pilot for the first fire-up of the thing.  The test is occurring the night of Teh Rei's dinner party.  *sigh*  Of course it is. 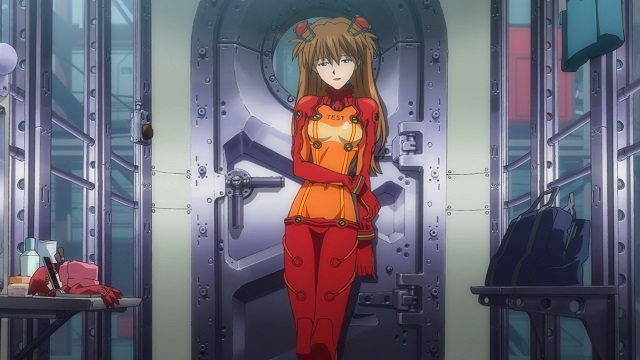 Asuka, of course, is all smug about being chosen to pilot the first REAL Eva.  However, as she's being delivered in her isolation chamber to Eva-03, she gives Misato a ring.  Turns out she's never liked being around the unwashed masses, and thinks that social thingies are a huge waste of time... but recently, she's found that she kinda likes people.  Not much, but a little bit. 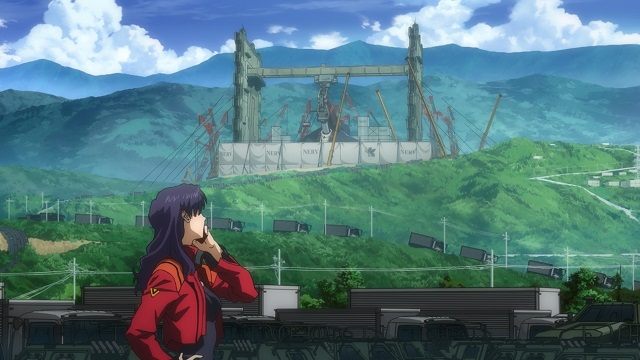 Misato points out that's it's too late to try and make nice now, she's already pissed off just about everybody there is to piss off.  Stop acting all lame, shut up and pilot.  No, wait, that's what I wanted her to say.  Instead, she understands what Asuka is telling her, and says now that you've let yourself open up a bit, there's a whole world ahead of her. 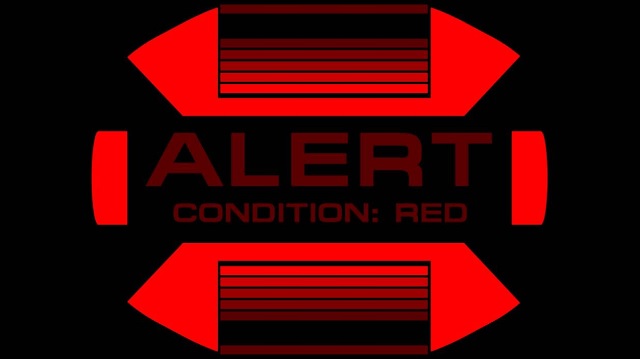 Nah, I'm just jokin' with ya.  'Course it's not a death flag, that'd be silly.  Asuka climbs into the command pod, and the activation test is underway.  Everything is normal for a minute, then... 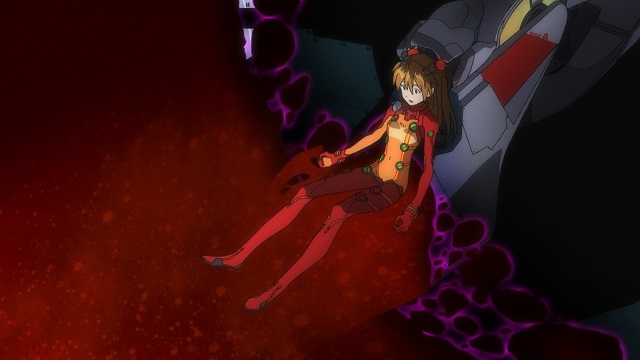 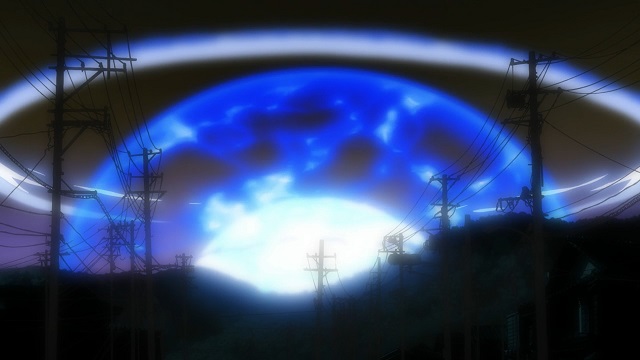 Boom.  Note the halo and the tasteful blue color.  Nah, those aren't signs of an Angel, nuh-uh.  Calls go out to all the usual suspects... Teh Rei's dinner party is cancelled.  Well, yeah. 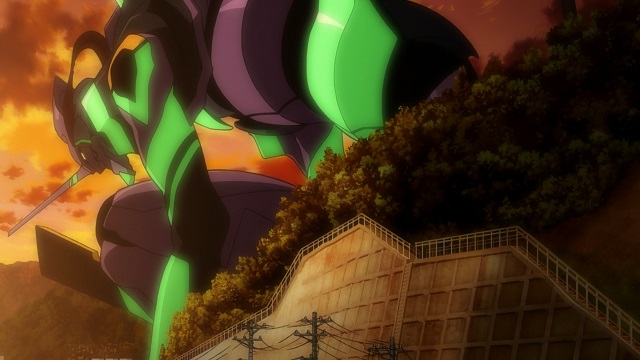 Shinji is stuck into Eva-01 with a new addition: the Dummy Plug, and no comments from the peanut gallery about how suitable the name is.  This here dummy plug has two purposes.  First, it's supposed to boost the connection between pilot and Eva.  Second, and more importantly, it allows for autonomous action by an Eva without a pilot.  It's more humane than using teenagers.  Well, why didn't they think of that BEFORE?  We could have had a life without Shinji!  Oh, what I would give for that.wondrous reality.  Before I get too caught up in the revelry of a world I cannot ever know... 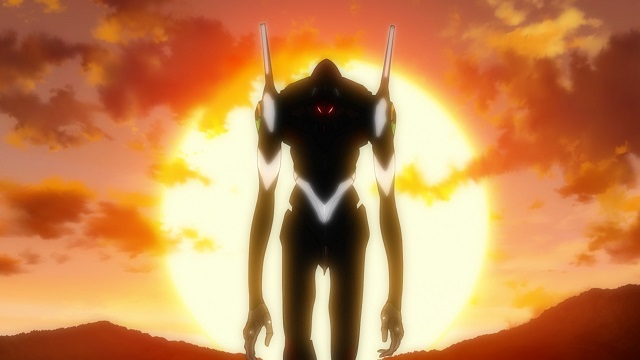 ...yup, it's an Angel.  Attempts to deactivate it from NERV HQ all fail, as does an attempt to remotely eject the command pod.  That's right, Asuka's still in that beast.  Considering its attitude towards the world, hell, she's probably piloting.  Shinji's ordered by Gendo Plushyferret to eliminate the target. 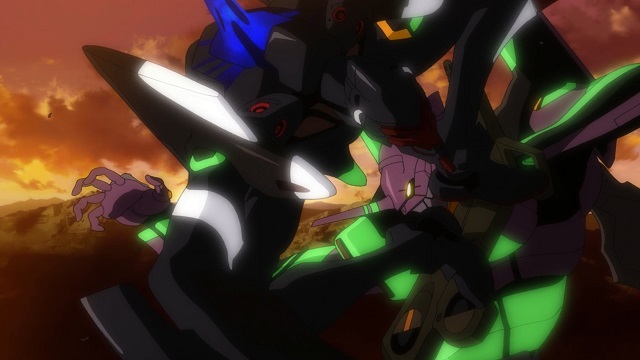 This is SHINJI we're talking about here.  Of course he can't bring himself to do it, and the Asukangel is all over him like a cheap suit on rice.  He won't even defend himself. 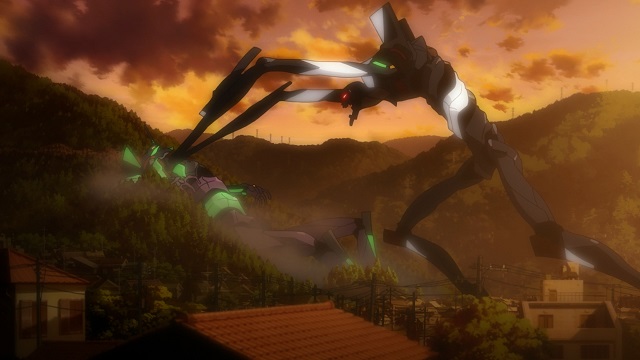 You know how I know Asuka is still in the Angel's control pattern somewhere?  At no time during the fight does she/the Angel punch Shinji in the face.  Dropkick him in the chest, yes.  Try to strangle him?  Sure.  Try to corrode its way through Unit-01's AT Field to either take over or destroy Shinji?  Absolutely!  But punch him in the face?  No way in the world.  Just as the Angel is about to pop Shinji's head off like a champagne cork, Plushyferret orders NERV to engage the Dummy Plug and take his son out of the loop. 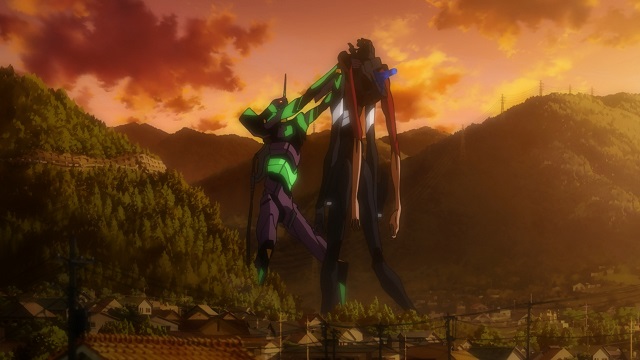 It only takes a second for Dummy-01 to snap Asukangel's neck like a pencil.  Welp, that's it, game over.  Except it appears that Dummy-01 is either bucking for employee of the year, or it's really really hungry, because it begins to eat. 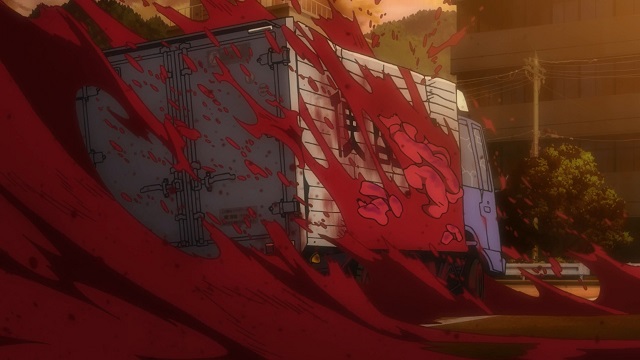 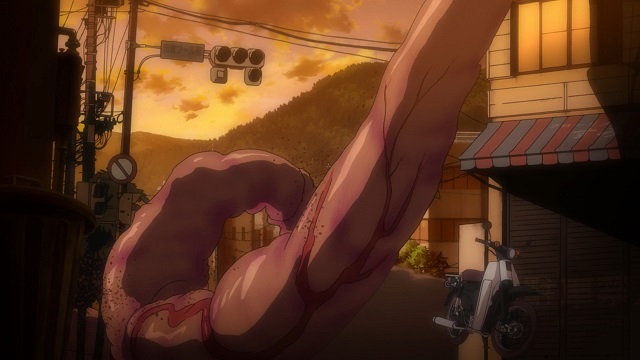 Very messily.  That reminds me, I haven't been to Der Rathskeller in a while!  Anyway, the carnage goes on for quite some time, all the while accompanied by the sort of song Japanese children sing when they graduate school.  Until, that is, Dummy-01 yanks the Command Pod from the Asukangel's neck.  Hurray, she's saved! 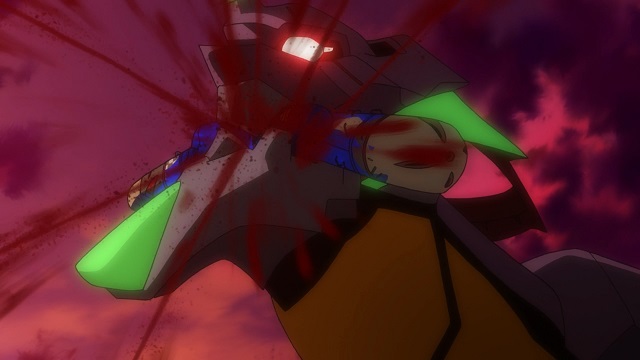 This seems like a good stopping point.  Next time, which won't be six months from now, we'll see the conclusion of Evangelion 2.22!  And more zombies!