Servant x Service It's a plot done to death, not only in anime but in just about every media type known to mankind: a young woman wronged seeks revenge, and will stop at nothing to get it.  She lives her life only for that final goal.  We've heard it all before, and we'll undoubtedly hear it all again. 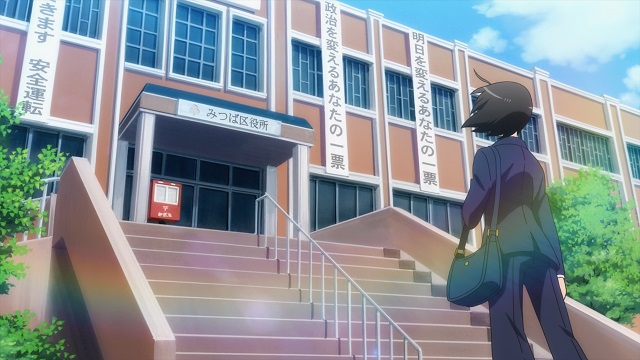 When you get right down to it, that's what *Servant x Service* is about.  What's different this time is that the character seeking revenge has chosen to become, not a ninja or assassin or police officer or soldier or spy, but... um... a civil servant.  Yup.  "James Bond, DMV worker."  It's her first day of work in an unnamed town in Hokkaido as one of the newest members of the Welfare Office.  Go ahead, I dare you to tell me you expected that. 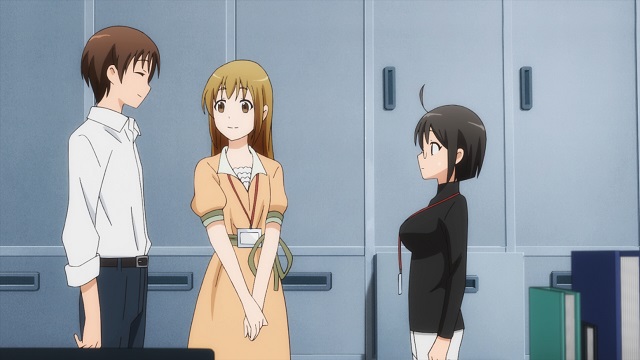 Our main characters.  Hasebe (L) is one of those jerks that's good at everything naturally, so puts no effort into anything... except, perhaps, goofing off and trying to get girls' phone numbers.  He decided to become a civil servant because it's a secure, easy way to get through life.  Miyoshi (C) is a recent college graduate and shy, almost timid.  She's a good listener, though.  And finally, Lucy (R) is the driving force for the show.  She's the one burning for revenge.  But why be a civil servant then?  Because she's trying to find the man who approved the name on her birth certificate... see, her parents were kinda ditzes, they asked for potential names from friends, and liked them all so much that they named her ALL of them.  Thus, Lucy's full name is "Lucy Kimiko Akie Airi Shiori Rinne Yoshiho Chihoko Ayano Fumika Chitose Sanae Mikiko Ichika... (continuing) Yamagami."   For the record, "(continuing)" simply means that's there's quite a bit more to her name, but we never find out what it is.  So Lucy figures the best way to find this man is to become a civil servant like him.  When she finds him, she intends to give him a very stern talking to. 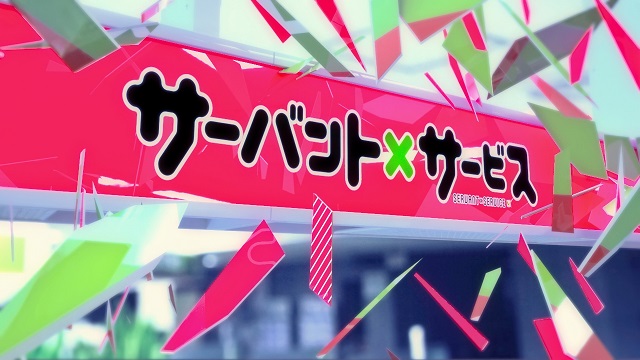 
So what we have is a stupid premise for a series about low-level governmental office workers. 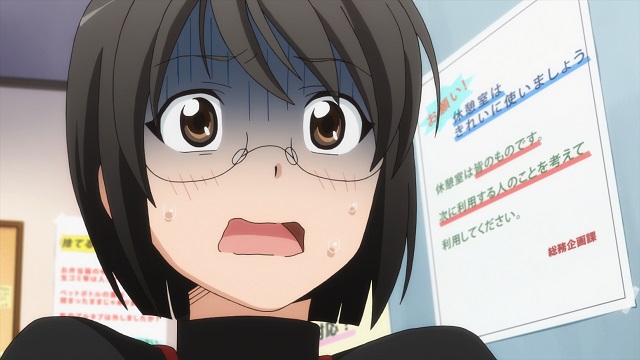 I'll forgive you any skepticism you may currently be feeling about the series.  On the face of it, this is a horrible setup, even from an entertainment medium famous for stupid show concepts.  I mean, young girls as WWII warships, or martial arts combat for discounted prepackaged meals, or horribly abused little girls being brainwashed into android assassins, or a magic penguin vomiting flying goldfish that gives people superpowers.  All of these seem to be more interesting than watching people shuffle paperwork and get yelled at. 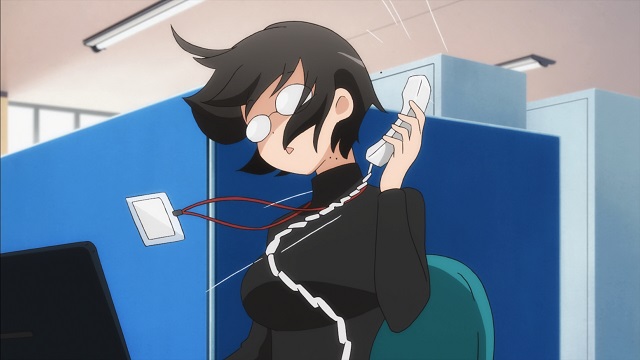 And yet, there's something about Servant x Service that allows it to overcome its humble origins.  Look, I had never heard of the show until about a month or so ago.  At that time, I saw an ad for the manga that seemed to suggest that the main character was a cosplayer in an office setting.  "What the hell," I said to myself, "I'll try it."  Well, I must have misread it, because the cosplayer is a co-worker, not the main. 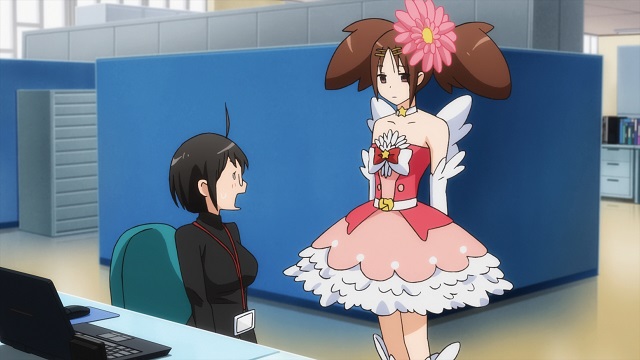 Chihaya doesn't dress like that all the time, by the way.  She's normally quite office-casual.  Oh, I should mention that she's also dating the office supervisor.  As opposed to the manager, who's a pink robotic stuffed bunny.  No, not all is as it appears in Servant x Service.  As you can imagine, a series like this pretty much has to be entirely character-based: good characters, good show... bad characters, bad show. 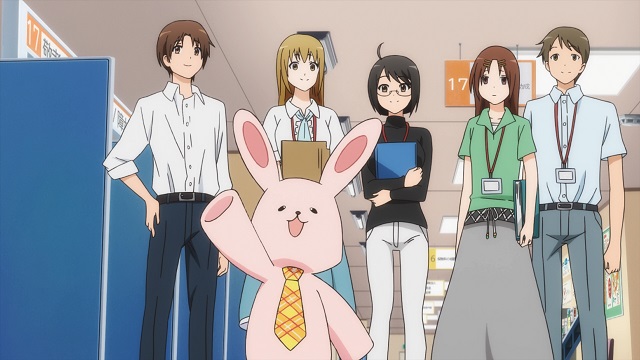 In this, Servant x Service is better than it has any right being.  It even pulled off the trick of taking an unlikable character and actually having us root for him... I never would have expected that to happen, or even work.  You'd expect the robotic pink bunny to be the lamest of the cast, and you'd be right, but even he has background and depth... okay, not much, but still.  To start with, the success of the series rests entirely on Lucy's shoulders but somewhere around the halfway point it becomes an ensemble show. 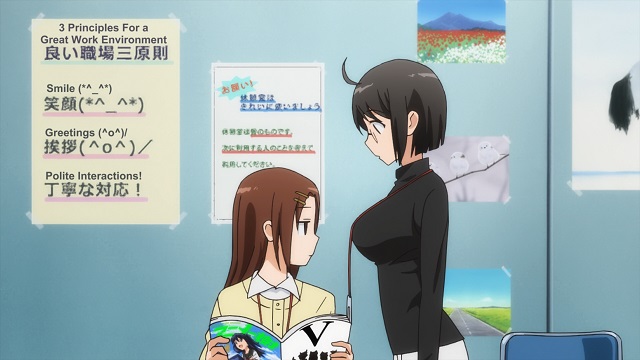 Other than a couple of sight gags and a half-episode devoted to a broken bra hook, Servant x Service doesn't use Lucy's ample tracts of land as a humor crutch.  In fact, her "lively ahoge" gets more mention.  Refreshing to say the least.  That's actually quite a good way to describe the show: refreshing.  Also really unexpected.  A show this good should have gotten more buzz.  I can't recommend it enough.  Watch it, and you can thank me later.  All wingtips up and hope for a second season.

Bonus points for the great OP, too.

2 Non-show-specific question here, but how is the name of the show pronounced, specifically the "x" part? Servant BY Service? Servant EX Service? Something else?
I see these "x" titles and never know how to say them.
This particular show sounds entertaining. I'll give it a try. Thanks for the review.

3 Thanks for the tip, Wonderduck.  This one flew completely under my radar.

I have a character in a story I'm pretty much not writing named Minarta Aurelia t'Lani t'Hooft van Buskirk Cooper-Smith, but even she is better off than Lucy.

4 I hope to start it this weekend.  My digital download was throttled on only finished earlier this week.

5 Jabrwok, I can be something of a boring literalist: it's "EX" for me.

The only reason I can think of that SxS was ignored was that it was a Summer (2013) anime.  Lord knows it wasn't up against much: Railgun S, one of the infinite Monogatari sequels, and a bunch of absolute crepe.  Enjoy, everybody!

6 I've heard the "x" in similar titles pronounced "ex-u", which would indicate the pronunciation of the letter "x".  I've also read that the intention of the "x" is a substitute for "against" or "versus" i.e "Godzilla X Mechagodzilla".

7 And I'm incredibly tired, running on a couple hours of sleep in the past few days.  I meant to include "which would mean the title of the anime is basically 'Servant Against Service' or 'Servant Versus Service'."

8 Slightly off topic, but hopefully of interest. One of the malls nearby has the Japanese equivalent of a Dollar Store in it (i.e. all kinds of cheap odd bits from Japan). While there I saw a package of three shower anti slip ducks. They were kind of flattened rubber ducks with suction cups on the back, meant to stick to the tub so you don't slip, I surmise. They seemed a little TOO three dimensional for the tub bottom unless you wanted it to resemble a climbing wall. And so on seeing them I thought of our host and thought to ask if they would interest him. I'm sure they could be stuck to other flat, smooth surfaces as well.

9 Absolutely interested, Mauser.  Stickyducks have all sorts of uses!

10 Thanks for the feedback on the "x" question. That's been bugging me for a while, and my websearch-fu was inadequate to the task:-(.

11 So far the only character who's given Lucy's... ample bosom... more than the barest attention (I'm two episodes in) has been the cosplayer, and that seems to be almost entirely for "she would look SO GOOD as [cosplay character]" reasons.

It's not really in my wheelhouse (sitcoms, UGH) but it's so adorable that I kind of don't mind. One big saving grace is that they don't linger on any particular gag so long that you tire of it. I doubt I'll marathon the thing, but when I need a pick-me-up goofball anime fix, this will be my go-to for a while.

12 That half-episode I mentioned is coming soon, GD, but you won't mind it in the least.

14 Being a (part time) statistician, my first reaction was that it would be "Servant by Service interactions"