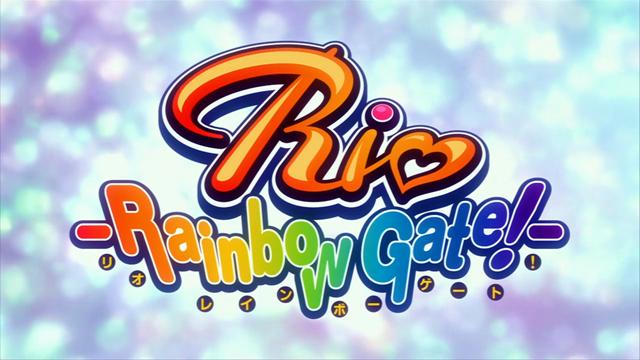 
Picking up some short amount of time after the events of Ep01, we find Rio coming off-stage, angry at being made to star in a Las Vegas-style song-and-dance show... or at least be a chorus girl in said show.  Point of fact, she hates the costume.

The color yellow does not suit her, and the giant feathers of doom just don't go well with anything.  Yes, I know it's a traditional outfit, native to the Las Vegas strip, but c'mon: only ducks can look good in yellow feathers.  She barges into The Owner's office and complains to the heavens.  Being the lecher he is, he gives her a choice: star in the next show, wearing a bikini with enough fabric to perhaps be repurposed as a small handkerchief, or train a new dealer. 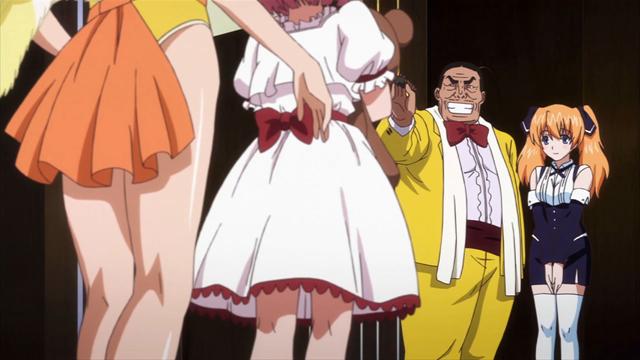 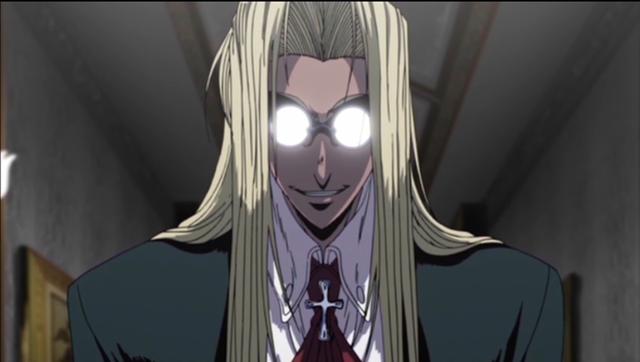 Hmmm.  Nope, I don't see the resemblance.  Maybe a different branch of the family.  Or maybe Ania just decided to rebel and do something wild like become a casino dealer, instead of the same old dreary mundane stuff like killing Nazi vampires who destroy London in an attempt to restart World War II and bring the Third Reich back to life.  I can see how that might pale in comparison to life in a casino, yeah. 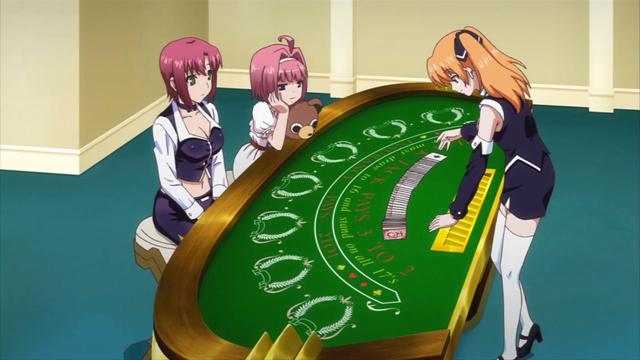 Given the choice between teaching a dealer with ties to vampire hunters and wearing a monofilament bikini, Our Heroine decides on the first option.  Up in Rio's suite (who would have a blackjack table in their suite anyway?  It's so hard to find something that goes with such an item of furniture... really, The Owner needs to hire a good interior designer), we discover that Anya is actually quite skilled with her hands (I bet she is, I bet she is, say no more!), to the point that Rio is impressed with her abilities. 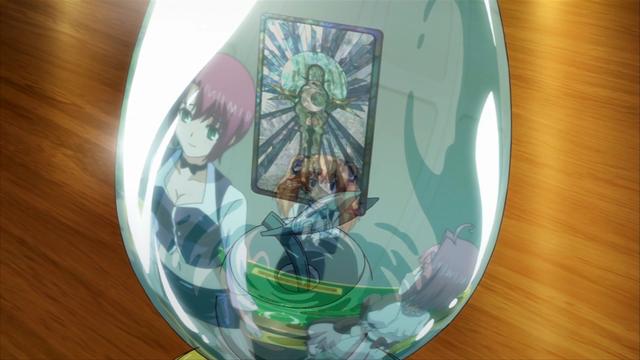 When they take a break, Anya discovers that Rio has a taste for blown glass sculptures.  No, wait, she discovers that Rio is a Gate Holder.  As little Mint has no idea what that means, Anya goes into exposition mode, explaining that the Gates were handed out by the International Casino Dealer's Guild. A dealer who wins all 13 Gates earns the title of Most Valuable Casino Dealer and earns the people's ovation and fame forever.  Rio's mother, Risa Rollins, was the first (and only) MVCD, so it was probably fated that Our Heroine would get a Gate.  Anya, a dealer herself, is suitably impressed.  Okay, "awestruck" is probably too weak a word for her reaction. 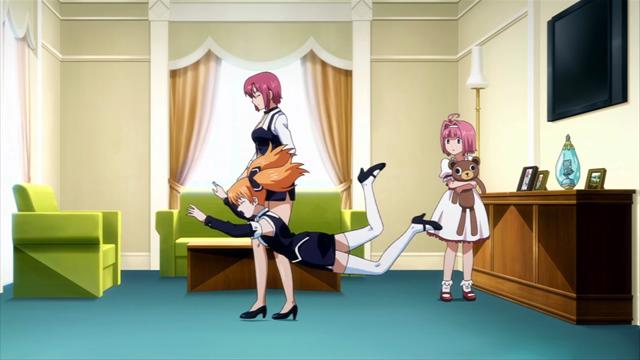 Anya is also desperately clumsy.  Terribly, terribly clumsy.  As in "accidentally destroy the world" clumsy.  Still, she wears a short skirt, so her clumsiness serves a purpose in the show: 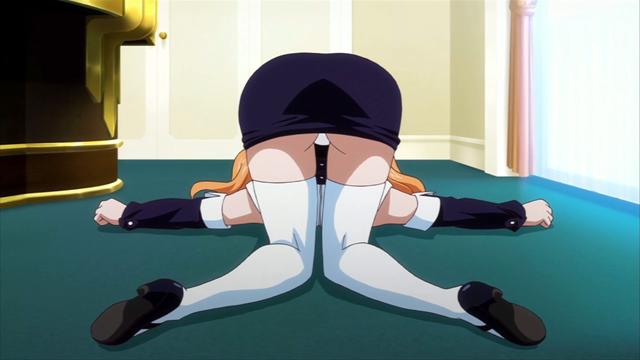 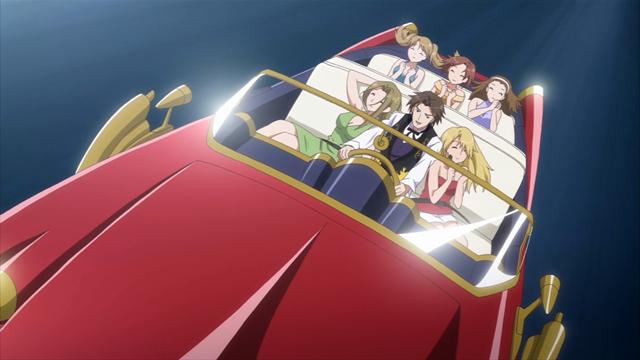 Meanwhile, on the causeway connecting Casino Island to the Mainland, where-ever that is, a gambler named Elvis (yes, really) and his fanclub approaches for a day's entertainment.  Elvis... hm.  Nope, not going to make any fried peanut butter and banana sandwich jokes.  Y'know, I had one of those back in my younger days.  It tastes just about like you'd expect a fried peanut butter and banana sandwich would taste: not altogether appetizing at all.  In fact, it was pretty nauseating... kinda like what one would anticipate chocolate covered bacon would taste like.  I wonder... 'scuse me for a moment.
...
Nope, no chocolate.  Or bacon.  To be honest, I think I'm glad about that. 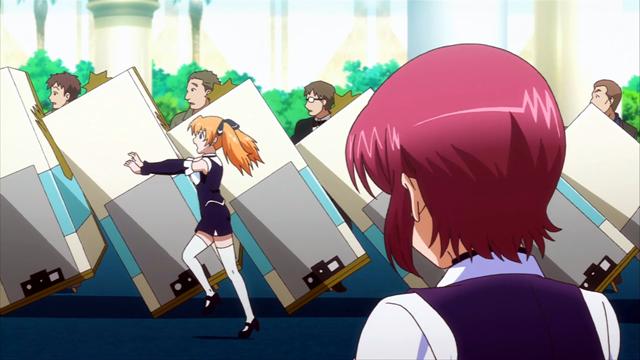 Back in the casino, Anya's clumsiness is raising cain.  Giant roulette wheels spinning down the hallways, one-armed bandits being knocked over like dominoes, dogs and cats living together.  Anya even manages to drop a tray of champagne glasses, shattering them like... um... well, like champagne glasses.  Hey, they can't all be gems, folks.

Elvis has entered the building.  You'll note I never said I wouldn't make other Elvis jokes, just not ones about about fried peanut butter and banana sandwiches.  You can fully expect to get a "dead on the toilet" gag somewhere along the way.  I just take my cues from the show itself, ladies and gentlemen: Always Going for the High Ground.  As Elvis makes his way through the casino, good luck and winners spontaneously show up in his wake in a way similar to Our Heroine herself.  What could this possibly mean, he asks, expecting that everybody reading along either already knows the answer or can figure it out.  One thing RRG! ain't is subtle....  Anyway, in his perambulations through the casino, Elvis stumbles upon Anya, trying to clean up the broken glass from the champagne accident.  Being the nice guy that he is (*rolls eyes*), he tries to help her, and ends up cutting a finger on the shards. 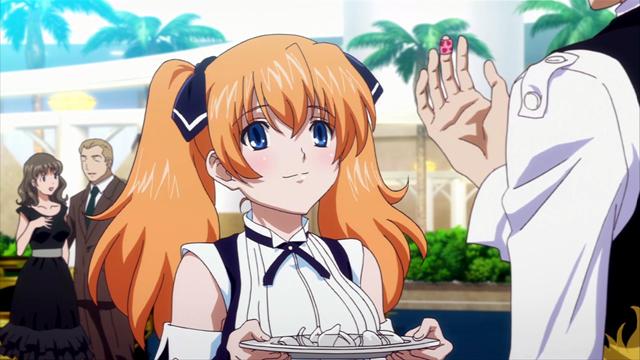 With her history of clumsiness, it's no surprise that she has a band-aid in her pocket.  No, the surprise is that she isn't covered with bruises and abrasions from head to toe.  One can only assume that her detached sleeves and thigh-highs are covering up the worst of them.  Actually, I think I just figured it out: she's actually a sufferer of Hansen's disease, and her limbs are numb as a result... as long as she doesn't have a thing for white gold, we'll just feel sorry for her and move on. 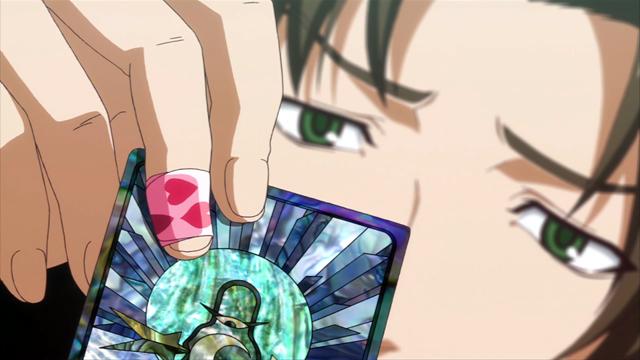 Tracking down Our Heroine, Elvis whips out a Gate and challenges her to a Gate Battle!  Shock and surprise!  Who could have expected that? 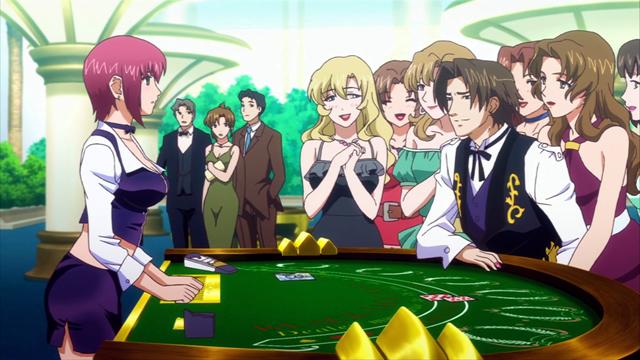 Rio is reluctant, until The Owner accepts for her.  Our first Gate Battle, how very exciting!  The crowd grows exponentially, and we move to a nearby beach.  A beach?  For a card game?  How... interesting.  Except this is RRG!.  From our point here in the future, we know that Gate Battles are never just card games (except late in the series, when the Production Staff couldn't come up with anything stupider than holographic flying sharks).  So what wonderment awaits us? 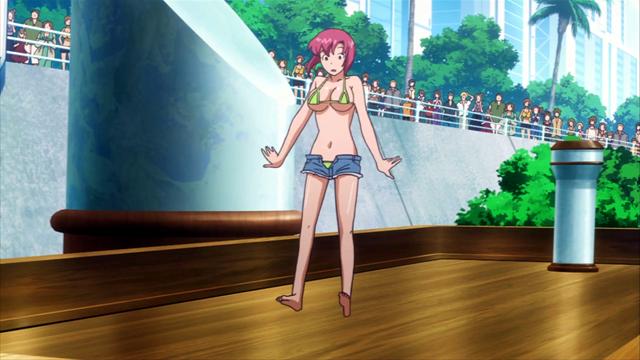 Of course The Owner wouldn't allow Rio to participate in this contest in her normal outfit, oh no... it's the aforementioned monofilament bikini, much to Our Heroine's surprise.  I'll do my best to avoid showing Elvis' costume... white jumpsuits just don't look good on a beach.

Elvis is chosen to be the bowler, and we discover that, like any good bowler, he's able to calculate exactly where the ball will land on the wheel... to the point that he can "call his shot."  What good this skill is when the whole outcome is based on Rio's choice of color, which she picks after he bowls, is not explained.  Still, he can do it, which is nice for him.  He winds up, bowls... 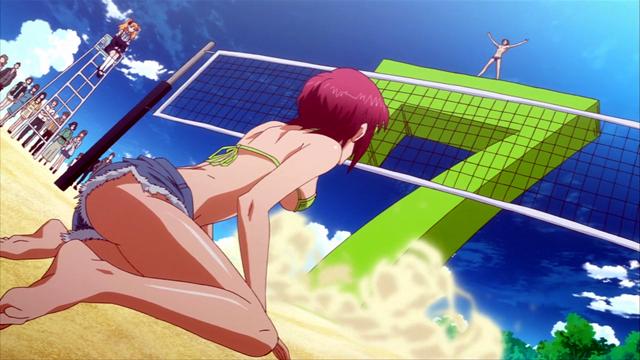 ...and suddenly we're in a beach volleyball game!  Well, Rio's used to this, I suppose, though what it has to do with either roulette or casino games in general escapes me at the moment. 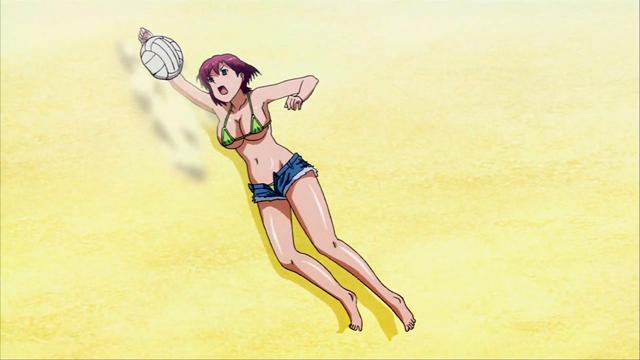 From high atop the green 7, Elvis is practically unbeatable, making Our Heroine dive all over the beach in desperation lunges, all the while proclaiming how the numbers love him and she stands no chance to win.  But Lady Luck loves Rio, too. 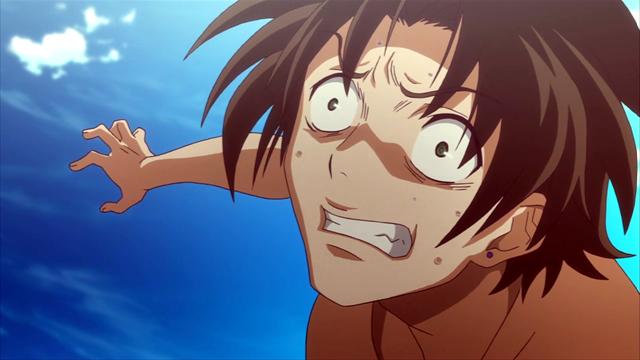 Oh.  That.  Hm.  Yes, well, okay, I suppose I could understand that interpretation, sure.  But why is Rio able to summon... no, I don't want to think about it.  With the help of the giant pink 1, Rio defeats Elvis in the game of beach volleyball and guesses "Red 1" on the wheel... and Elvis laughs caustically.  He was aiming for black, and calculated everything perfectly!  He wins! 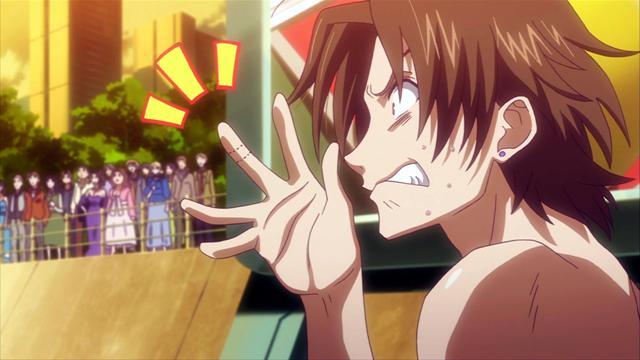 Until he doesn't.  But his numbers are always correct!  How could this have happened, what could have thrown him off? 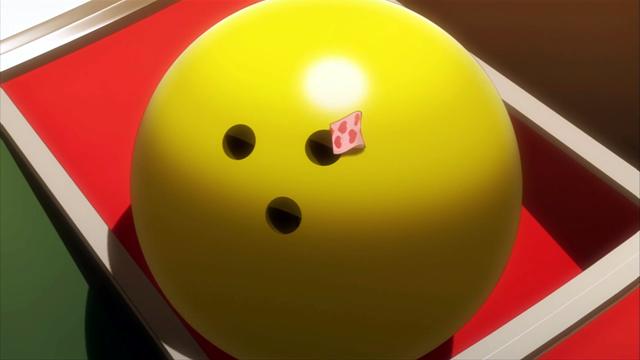 Yup... Anya's band-aid stuck to the ball, throwing all of Elvis' figures out the window.  He surrenders his Gate, a beaten man.  His fanclub leaves him.  Confidence destroyed, Elvis leaves the building, never to return... until The Owner loses Casino Island, but that's far in the future, as well we know. 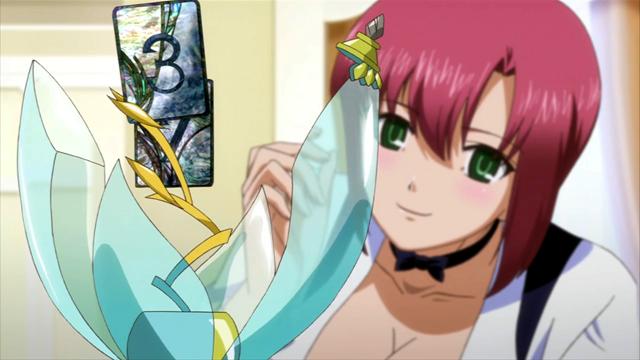 And Rio basks in the glory of her victory, immediately putting her second Gate into storage.  Fade to black, roll credits.

To be honest, this episode really introduces the "weird casino game" conceit to the series, and therefore is hugely important.  But, and I mean this with all my heart, it also sucked harder than a nuclear-powered vacuum cleaner.  Part of that might be because Elvis spends most of the second half of the episode in a Speedo, and part of it might be because Oh God The Stupidity It Burns, particularly after I thought I had gotten away from it.  The utter ridiculousness, and the embracing of said foolishness, that becomes the hallmark of RRG! in the future is missing here.  While hardly played straight, the whole megasuperjumboroulettegame doesn't have the same joie de vivre as the Flying Holographic Sharks or the Water Slide episodes.  I'm surprised I continued watching after Ep02, to be frank.  Of course, I'm surprised I continued watching after EVERY episode, so what does that make me? 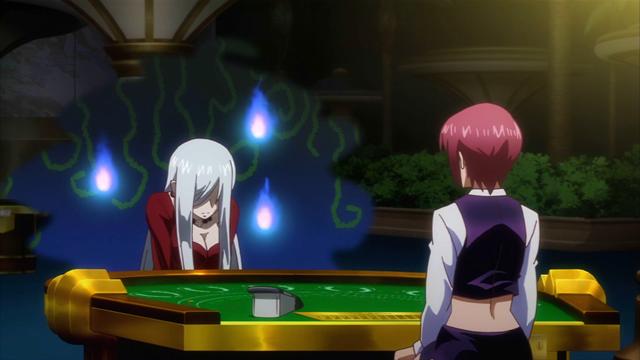 Rio plays with the undead.  Of course she does.  And yes, there'll be a "next episode" review.  Because I'm a masochist, that's why, but you guys keep reading... what's your excuse?