Panzer Vor (If You Know What I Mean)! One of the many surprises involving the recent series Girls und Panzer was the lack of heavy fanservice.  Oh, don't get me wrong, the girls are cute and pleasant to look at, but pretty much the only true fanservice shots are for the tank aficionado. 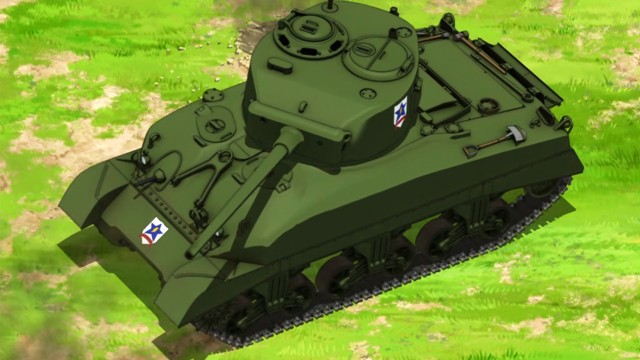 Oh baby, do those treads go all the way up?

And that's fine, great even.  It's a wonderful thing when shows take the high road and avoids blatant pandering to succeed upon its own merits.  I mean, I love the Strike Witches franchise, but there's no way to use it as an example of the fine art of anime... there's just not enough pants in that show.  However, a casual glance at a well-known repository of anime-related fanart (link ridiculously NSFW) makes it clear that there's a demand for Girls und Panzer fanservice.  Which is why it should come as no surprise that the Blu-Ray release of the first volume of GuP in Japan contains an OVA... 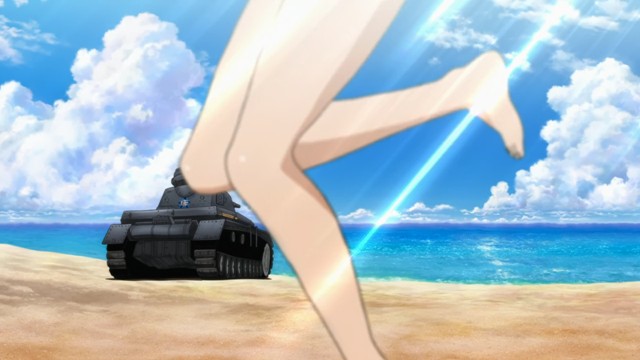 Being devoted to my readers, I've decided to take on the challenge of providing suitable coverage of this OVA for your edification.  Join me, won't you, in an excursion into GuP OVA #1: Water War!


For reasons that are flimsy, even to the participants of the OVA, it's decided that the next battle will be held on a tropical island where there's got to be a beach!  And if there's a beach, there's gotta be swimming, and that means swimsuits!  It's quickly decided that the Ooarai Girls High School Tankwondo team simply must make a run to a swimsuit store immediately! 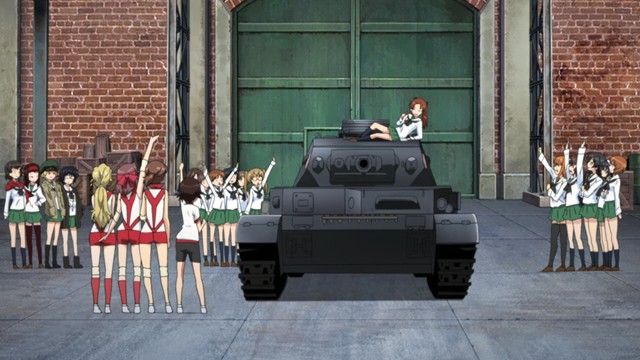 Of course, there just happens to be such a place on the Mega-Aircraft-Carrier that doubles as a high school, but it's no ordinary swimsuit store, oh no!  No, this one prides itself on carrying anything that could be worn as a swimsuit.  Anything?  Anything. 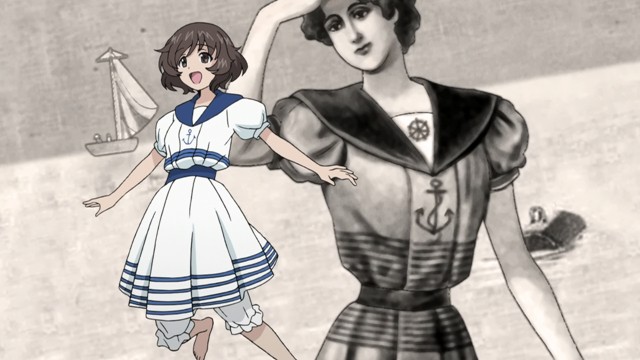 There does appear to be something of a disconnect between what the Production Staff considers "fanservice" and what everybody else in the free world and Canada considers fanservice.  There's some quick discussion about what looks cute and it's thought that the panzer-inspired swimsuits will be huge hits this season.  Panzer-inspired?  What, they have turrets? 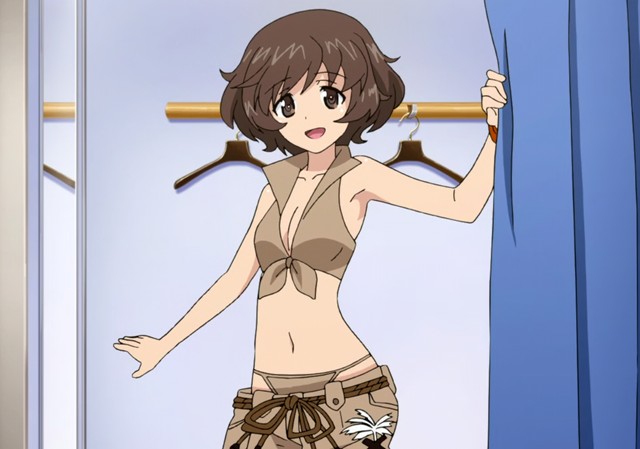 Please note the "Afrika Corps" insignia on the left hip.  This makes it "panzer-inspired."  While everybody in Team Anglerfish tries to figure out what to make sleepy Mako wear, the rest of the Tankwondo club is out there, looking at suits as well... 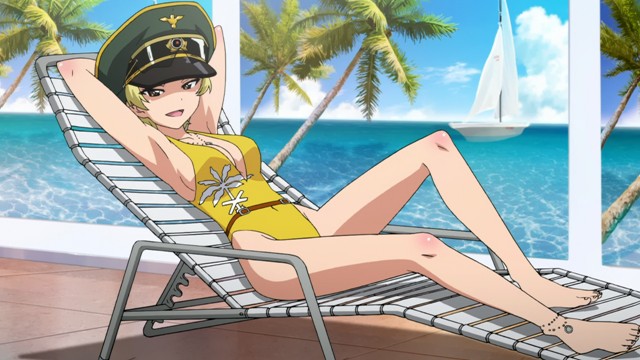 Team Hippo's Erwin unsurprisingly also gravitates towards the Afrika Corps collection.  Over in some other part of the store... 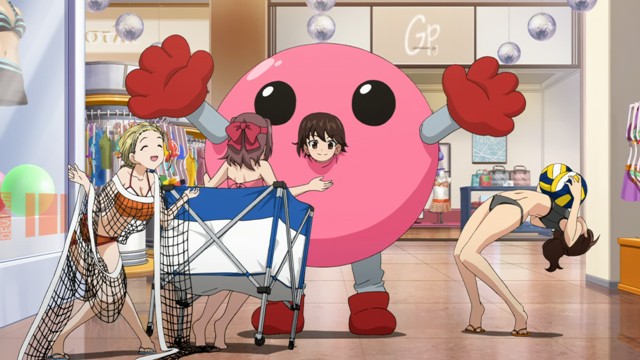 ...things are getting really weird.  I'm not exactly sure what Team Duck is up to here, but it's best that we don't actually think about it too much and quietly move on.  Let's see what Team Rabbit has decided upon, shall we? 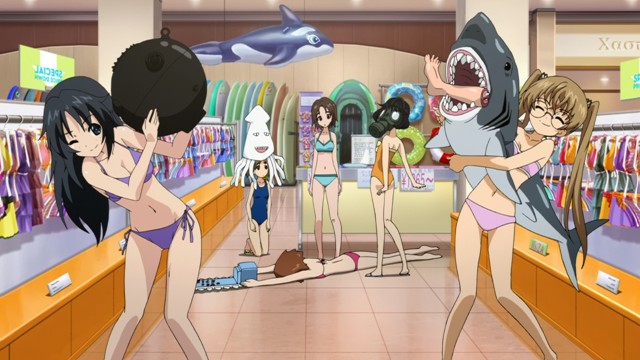 On second thought, let's go back to Team Duck... they seem substantially more well-adjusted in comparison.  I did find the chainsaw kickboard to be clever, though... which worries me to no end.  I can't believe I'm saying this, but what swimsuits have the Student Council Team Turtle decided upon? 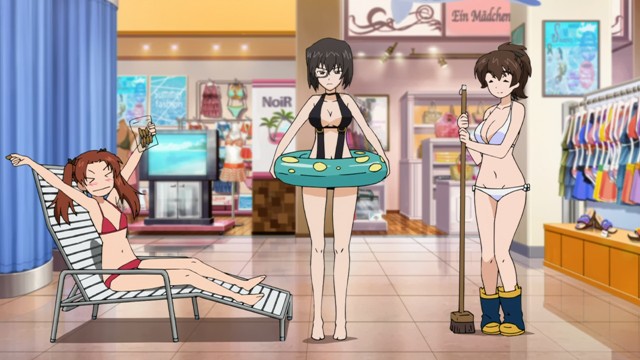 They're... surprisingly normal.  I have questions about the boots, though.  Everybody gets suits, and all is right with the world.  So finally, it's time for their trip to the beach, and it looks like Team Anglerfish have modified their tank a bit. 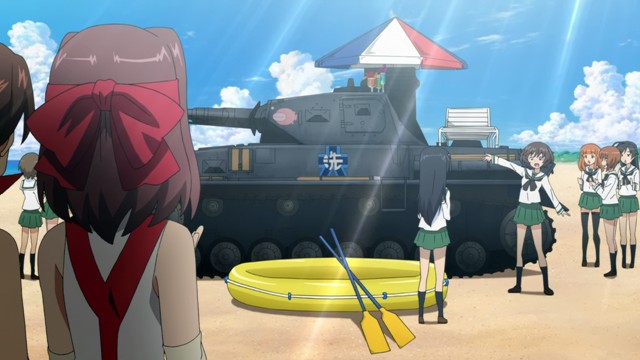 Somewhere, Heinz Guderian weeps.  Everybody switches into their swimsuits, there's a lot of long, slow pans over the scantily-clad crewmembers of Team Anglerfish, and one final group shot, though I'm not sure how they wound up here: 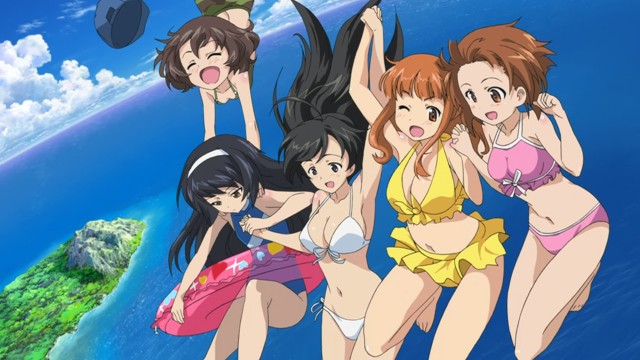 ...the terror on their faces is palpable as they plummet from hundreds of feet in the air towards a blue ocean that will be as hard as concrete when they hit.  None of the members of Team Anglerfish will be present for their next battle, as they will all be crushed and broken, then eaten by sharks.  Or it's a concept shot thrown in to show how happy they are as a team, one of the two.  And then, in true Girls und Panzer tradition... 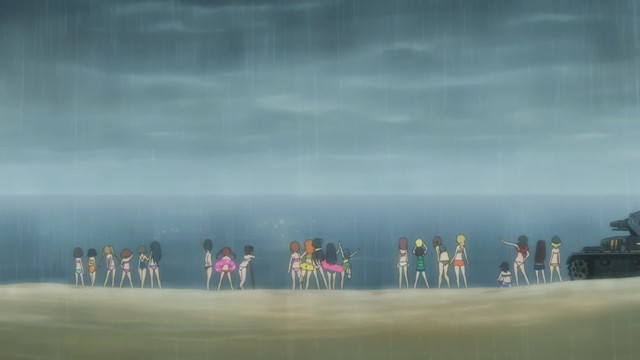 ...the weather changes in the space of two frames.  The end.

Now, this was nice, I guess, but I would have rather the Production Staff devoted the time to actually finishing Ep11 and 12 so they could have been broadcast.  Oh well, they do have to make money, don't they?  I suppose.  There were no hints about what OVA #2 would be about, so we'll just have to wait and see.  Toodle-loo! 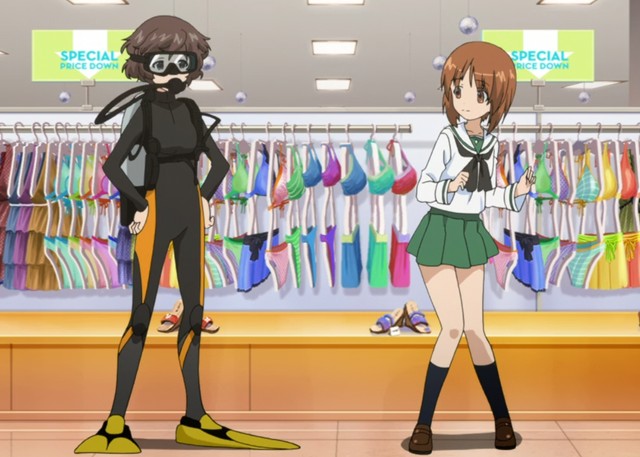 Actually, I am deeply disappointed. I'd seen the shot of the SCUBA suit and thought they were subverting the trope. alas...this instead of # 11.

2 Okay.  I have a person-who-doesn't-know-very-much-about-tank-design question.  I looked up the tanks used in the series (mostly on Wikipedia, I must admit) to get some historical perspective.  The Churchill was noted in the wikipedia article for having "all-around tracks", which must mean something other than I think it means...because I know what a track is and how it works on a tracked vehicle.  What are "all-around tracks"?  Is this an historical reference or an engineering reference?

3 I think what that means is that the top part of the track goes higher than the side of the chassis. Why that might be a good thing is beyond me; it can't have been very important because the Sherman and T34 didn't do that.

4 Here's a great picture of a Churchill's treads.  One advantage of this tread design is that you can put hatches in the side of the hull.  Whether they are useful is another question.

5 It would seem, then, that the "all-around track" on the Churchill was primarily a holdover from the Mark I - IX tanks.

It would seem, then, that the "all-around track" on the Churchill was primarily a holdover from the Mark I - IX tanks.

Running the track over the chassis/hull, as well as equipping it with extra road wheels, gave the Churchill arguably the best all terrain performance of any tank of WW2.  It would not be able to win races on the road (Even when new, and the Churchill, like people, got slower as it got older and put on weight.), but it could handle steeper slopes than any other tank of the era, and move better over rough country than most.  Since the infantry it supported could not walk any faster but often did have to fight in terrain that would prevent the use of other AFVs, the performance advantage was very significant.

Incidentally, the rhomboid shape used by the WW1 British tanks might given them the best poor terrain performance of any AFV deployed  - but their lack of suspensions or shock absorbers detracted from that advantage.

7 I think the Churchill could probably climb over a higher barrier (e.g. a stone wall) than a comparable tank whose track didn't do that.

I think the Churchill could probably climb over a higher barrier (e.g. a stone wall) than a comparable tank whose track didn't do that.

Of course, even if a tank could climb over a barrier like that, most tanks and their crews would not risk it if there was enemy opposition.  It is usually much better to find a way around, or wait for the engineers to blow a hole through, than climb a barrier in a tank.

9 hey i get an email of these pics in full size? for.... research

10 and on the churchill it should be noted that is was designed to be "mechanical infrantry" so the tracks were designed to spread the weight of the tank and allow it to go on sand, also they were bent up to allow a high clearance. ( although its debatable whether it realy helped) thats just my 2 cents hope it clears it up