One Last "...Angel" Post. I almost wish I hadn't checked this.

The VCAs have a new feature this year, showing where each nominee ranked in the voting in each category.

"...Angel" was the best of the non-finalists in the "Best First Video" category.

UPDATE:  No it wasn't, at least not because of this list.  It's in alphabetical order by video name; of course, I was looking at the name of the creator instead.  Thanks to Andrew F. for pointing that out.  Guess I just wanted it to be true so much that I just didn't research it enough. 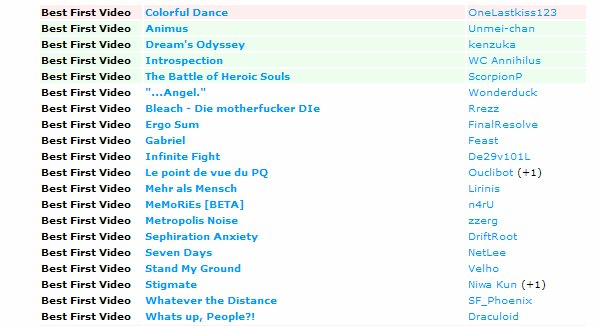 SO close, OH so close... congrats to OneLastKiss123, though.  Really good video, there.

I grabbed the "finalists" pack when it came out, and... I'm sorry, but that .hack//Sign video was a complete waste of electrons. It had the futhermucking subtitles in it! And that beat your video how, exactly?

You wuz robbed. At least, robbed of a finalist berth. You shoulda been a contender.

GD, if you go into the forums at The Org, there were quite a few people asking the same question (well, more asking "how did that make it into the finals of ANY category" as opposed to "how did that beat '...Angel'?") for the same reason.

I'm not going to bad-mouth the creator or his product; I'll take the high road and say "it beat my video because it got more votes" and leave it at that.

But thank you for your support!  I appreciate it muchly, and hope you're feeling better!

3 Err... not to demean your vid in any way, but isn't it just first in alphabetical order?

Andrew, how dare you notice such details?

I was looking at creator name, not at AMV title.  Crap.  Everybody, never mind...

Well, it's a bit of long story - so i'll knock an email together for you later to fill you in on all the details.

7 Think of it this way... you didn't make it to the finals for "Best First Video", but you totally won "Alphabetical Order"!