Megane no Kanojo OVA In this day and age of anime otakudom, the internet gives you just about anything you could possibly want to ever want to know about every show that's running, has run, or is going to be coming down the pike.  It has also given us the chance to dislike shows even before we see them, and to tell everybody that the shows are awful weeks before they hit the air.  Every season it has become routine to hear the call of "worst season ever!"  These calls are never right.  There are always shows that come from out of nowhere that sound horrible but turn out to be decent, good, or occasionally even great.  It is therefore rare that something sneaks through the vast web of bloggers, websites and twitterfeeds until it is actually released.  I don't consider myself particularly plugged in to the Great Horde, but yet I still seem to know a little bit about just about everything that's coming out every season.

Which is why the Megane no Kanojo OVA has come as such a surprise to me, and I suspect quite a few others... I heard nothing about it prior to the day someone subbed it.  That's a shame, because in this time when cynicism about everything anime is de rigueur, this little show is quite a breath of fresh air.  The OVA consists of four unrelated short (around 10-12 minutes running time without the OP and ED) episodes about, as you may have guessed from the title, girls who wear glasses.  As of the time this is written, UTW has released two of the episodes. 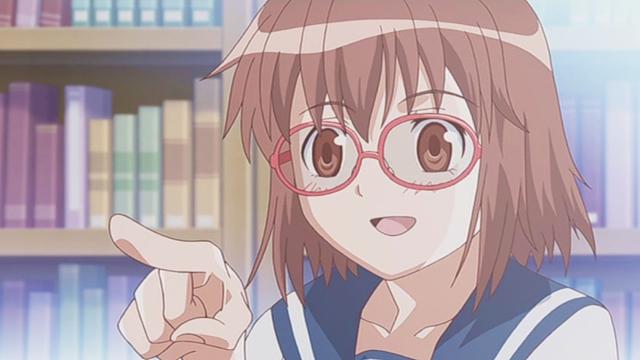 The first one is about the Sempai of a high school Literature Club, and the boy who joins because he saw her without glasses once and thought she was cute.  Shocked and horrified by the fact that she wears glasses constantly, he then spends a year trying to get her to take them off, just once... until she discovers that his eyesight is horrible.  Hijinks ensue.

The second episode is about "Japan's most popular Idol."  In her time off, she puts on a pair of glasses, a different hairstyle, and a floppy cap as a disguise, then sits in a coffeehouse and relaxes... until the day that one of the waiters asks her out.  They go on a date, while she frets the entire time that he knows who she is... until she figures out that he really has no clue, then she frets about the fact that he doesn't know.

There's no way in the world that I'd claim that Megane no Kanojo is a great show.  The art isn't particularly good, the two stories so far aren't particularly deep (to be fair, there's only so much you can do in 10 minutes), the characters are basically stock, and on and on.  But yet, they're refreshing.  There's no pretensions towards great art here, just short stories that are entertaining, friendly and fun.  Ten minutes is about the right length for them; shorter and you won't get around to actually liking the characters, longer and the amount of story the plots can support would run out.  The production team clearly understood this and did the best they could under the constraints they had.  The results turned out pretty good.  Heck, I had a smile on my face after I watched each one, and what more could you hope for from a show like this? 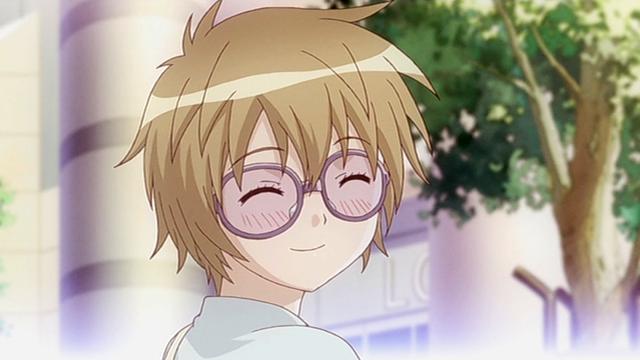 1 Wow.
It fits into my available spare time.
It is aimed at my fet..er...tastes.
And appears to be pleasant.

I am the target audience.