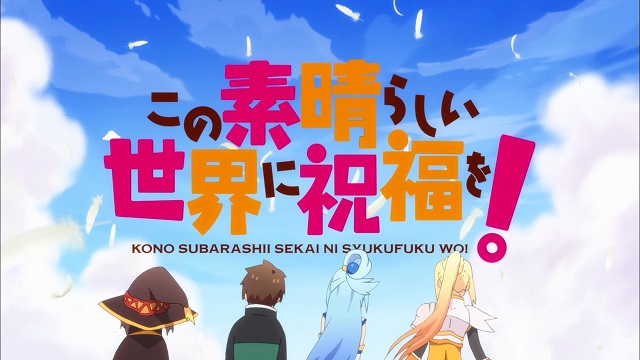 
First, a quick look at the plot.  This is Our Hero. 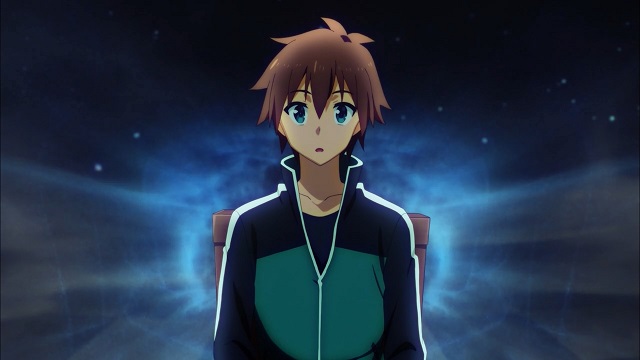 His name is Kazuma, and he's a typical anime high schooler with a taste for computer games.  He's 16 years old... at least, he was when he was alive.  Literally mere moments ago, he died pushing a girl from his school out of the way of a truck.  In the afterlife, he is greeted by... 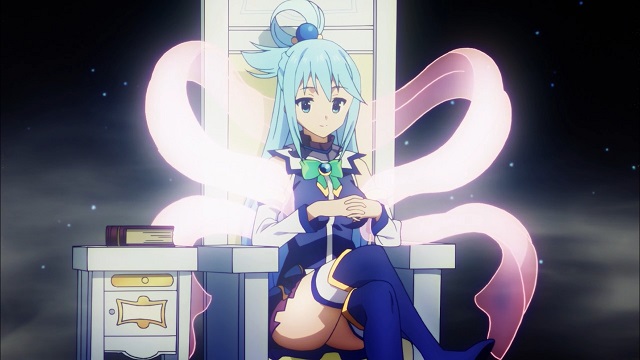 ...Aqua.  She is a literal goddess, there to guide him to his correct destination.  He's given two choices: reincarnate back on earth, or go to Heaven.  But there is a third option, one that as a gamer, he might be interested in.  There is a world ruled by an evil Demon King where things are so grim that when people die, they immediately choose Heaven instead of reincarnation.  Thus is the population declining rapidly.  If he chooses, he can go to that world instead, with all his memories intact, and with one skill or item of his choosing.  An enchanted suit of armor?  An all-powerful sword?  A magic staff?  Instead, he chooses her.  The Gods allow it, and they both end up in this world.  Once there, he begins to understand the rules of the world, and they put together a party.  The next to join is... 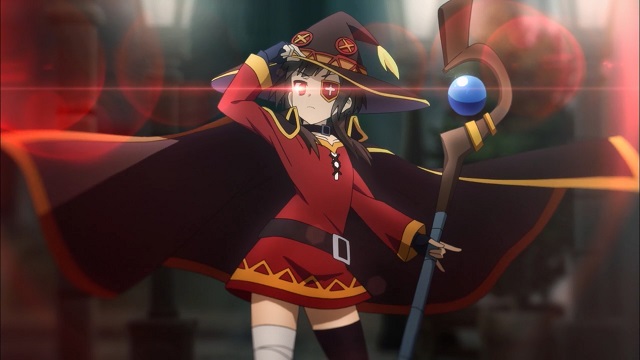 ...Megumin.  Though young, she is an arch-wizard from a line of Crimson Demons.  She is probably the most powerful human we see in the series, capable of casting Explosion spells of great strength.  The final member of the party is... 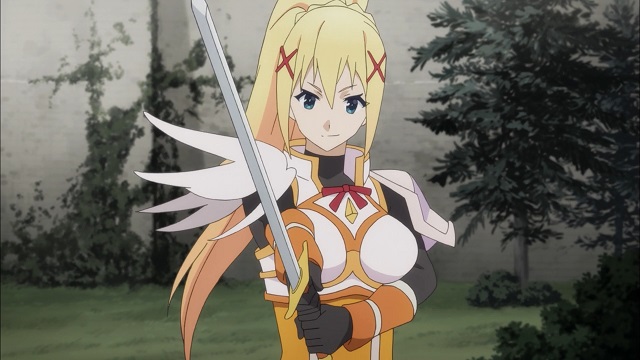 ...Darkness.  She's a Crusader, possessed of great endurance and willpower and a sense of duty to defend the people of the land she calls home.  With the party complete, Kazumin and Aqua begin their quest to defeat the Demon King.  But first, they must take on his Generals...

It all sounds pretty generic, doesn't it?  Well, you're right, it is, but that's because I didn't tell you the whole story.  To whit: everybody's incompetent.  Darkness has great endurance, but that's because she's so uncoordinated that she can't hit anything with that sword.  She can't even hit stationary targets.  So instead, she's a damage sponge.  That's good, because she's also a masochist who gets turned on by the very thought of abuse, let alone the actual thing.  Megumin can cast that grand Explosion spell, but if she does so, it uses all of her energy to the point that she can't even walk.  Oh, and she doesn't know any other spells.  It's the nuke or nothing for her.  Kazuma has an excuse: he's not from around here; in fact, he's always the weakest character in the party... but he learns as the show goes on.  He's the only one that does.  He also makes the biggest mistake in the show.  That mistake?  He chooses Aqua. 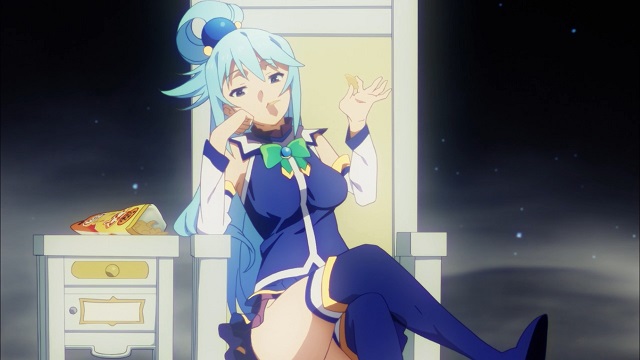 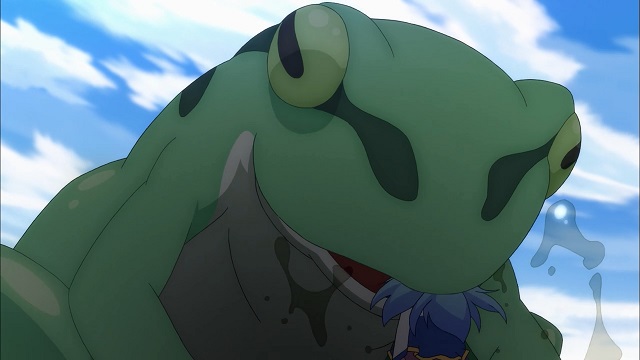 Like the time with the Giant Frogs, where she's so busy putting conditions on saving Kazuma that she doesn't notice that she's going to get eaten.  Or with the snow fairies, where she neglects to mention the Really Big Snow God that'll appear... and kills Kazuma.  Or when she constantly bullies an ally that happens to be undead (you'd never know it).  Or spends all the money the team earns from a quest on stupid stuff, or causes so much collateral damage on her own that the party is barely scraping by.  This sort of thing goes on throughout the series. 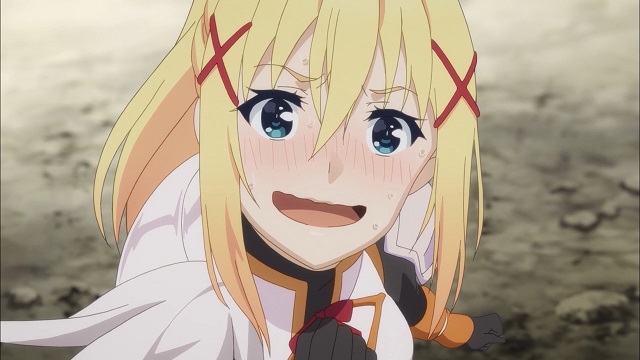 But she's hardly the only annoying bit of the show.  Darkness and her masochistic streak gets leaned on real hard, and it stops being funny real fast.  Of course, Kazuma gets made out to be a pervert because of this, to the point that Megumin and Aqua start in with such comments towards the end of series.  Ha.  Funny. 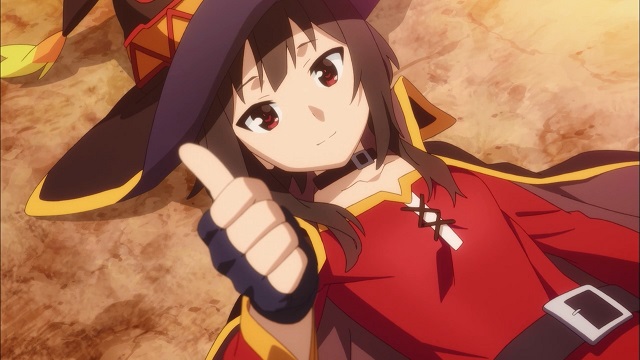 Unsurprisingly, Megumin is the most popular character to come out of the show.  Over at my image board of choice, she's got more pictures than Darkness and Aqua combined.  I'm sure there's two reasons for this... 1) she can almost literally drop a nuke on a target at any time (once), and 2) she's cute.  Other than being somewhat delusional, she's also fairly normal.  Well, as normal as people can be in this series. 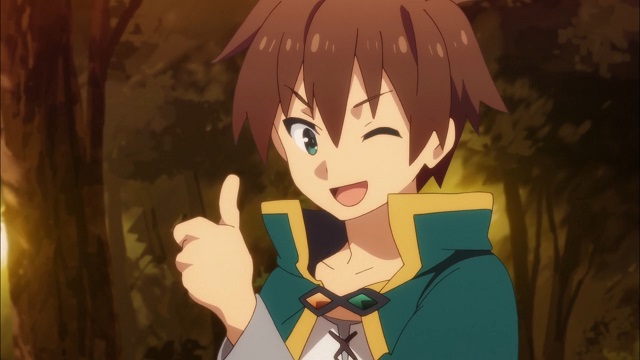 As a main character, Kazuma isn't bad.  He's not a pushover in the least, and he has a grip on the situation from Day 1.  He knows he's not able to take on the world as a starting adventurer, so while he gets bored of laying brick and so forth, he also can't do anything about it to start with.  That's refreshing... he's a n00b, but a smart n00b.  He's absolutely the thing that saves the show from total failure. 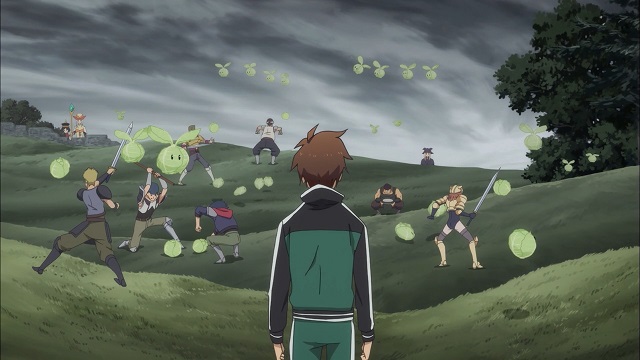 Remember, this show is a parody, a send-up of RPG-based shows.  That's why, for example, the monster-of-the-week in one episode is cabbages.  In this world, cabbages are alive and migrate across the country in vast hordes.  It's amusing to an extent.  The end boss for the series is suitably menacing, but there's never any drama... it's too rushed.  That brings me to another point... the series is only 10 episodes long.  The whole thing is rushed.  They've announced a second season, so yay, I guess. 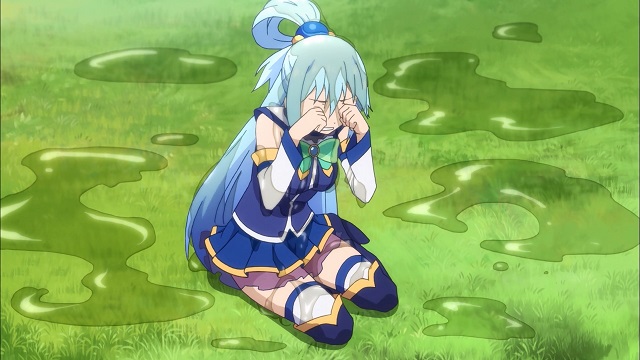 On the whole, I'm really kinda "meh" about KonoSuba.  The idea behind the show is good, the execution is decent enough, but when half of the main characters are so annoying that they're hard to stomach, it's difficult for me to recommend.  I guess I'm in the minority in this view, but there ya go.  It doesn't suck, but it's not very good either.  Take that as you will.

It's a shame, I wanted to like the series.  I'm not even sure I don't, to be honest.  It has its moments... there just aren't enough of them for me to recommend.