It's Snowing... Sad Girls Everywhere! ...well, not really.  I got home, made myself some dinner, and settled into the Comfy Chair to watch Mythbusters.  Rerun.  What to watch whilst I dined on tortellini and salad?

Two hours later, the DVD came to an end, and I didn't notice how the time had passed, as is usually the case when it comes to episodes 13-15, also known as "the end of the Mai arc."  I forgot just how GOOD the storytelling is in those episodes... so much so, that I got hooked all over again.

Which is amazing to me.  I've seen the show maybe four times all the way through, and spent a long, long time with it for "...Angel", you'd think I'd maybe be tired of it by now? 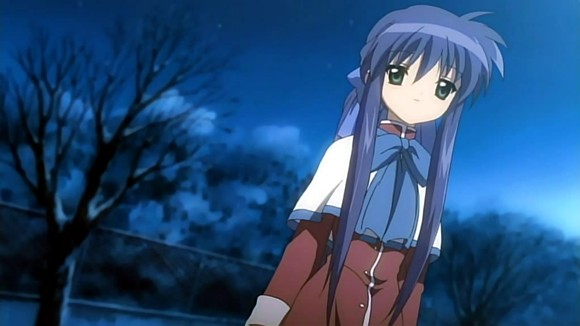 I just killed a demon... I'm going to Disneyland!
Nope.  Not by a long shot.  It doesn't hurt that the video quality is perfect, too, even on The Pond's low-quality TV.  There are only a couple of things I can complain about concerning ADV's performance.

The first is their insistence on translating "Akiko-san" as "Mrs Akiko".  While that might be technically correct, it comes off as clumsy to American ears/eyes/whatever when it's said five or six times in a scene.  The second is the packaging: there's nothing in the DVD box except, well, the DVD.  I would have really liked a booklet of some sort, like what they did with the non-thinpack Azumanga Daioh DVDs.  Budget cuts, I'm sure, but...

Oh well... if those are my biggest complaints, then it's still pretty darn great.