In Praise of Chuu2 Did you watch Chuunibyou Demo Koi ga Shitai! (aka "Chuu2") when it aired in the Fall season? 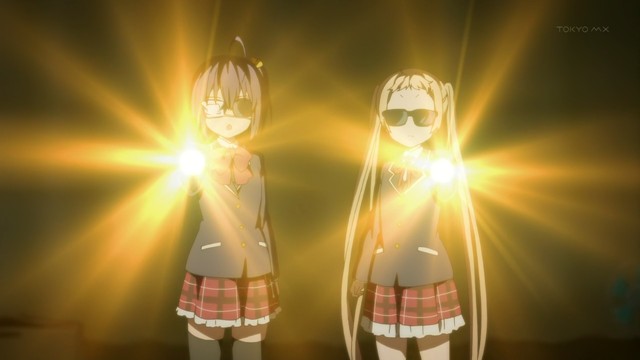 If you didn't, you've missed something awfully special.  I'll admit, I was unable to watch it when it was airing, but I've made amends for that.  Wow, is this a good show.  The basic setup is simple: guy goes to highschool intent on leaving his fantasy-tainted youth (he called himself "Dark Flame Master"... in public) behind and just live a normal life.  Then he meets... her. 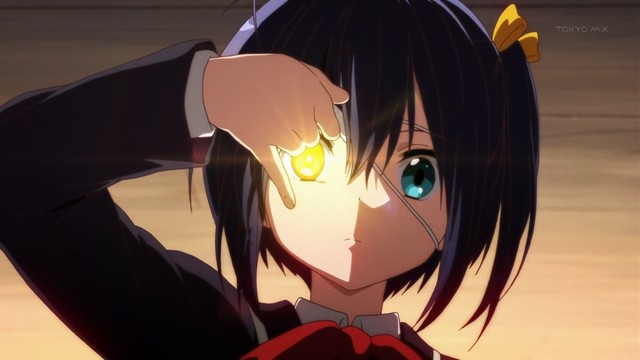 Rikka, possessor of the "Tyrant's Eye."  Or a colored contact lens.  One of the two.  Unlike Our Hero, she still believes in her fantasy-tainted youth; in fact, she lives it whole-heartedly.  I'll be honest... I was embarrassed on her behalf for the first episode.  Not like I emphasize with her or anything, heavens, no... I'm merely a hyperintelligent duck with the ability to type.  If you can get past that initial embarrassment, however, you find yourself in the middle of the best anime in quite a while, perhaps of all of 2012. 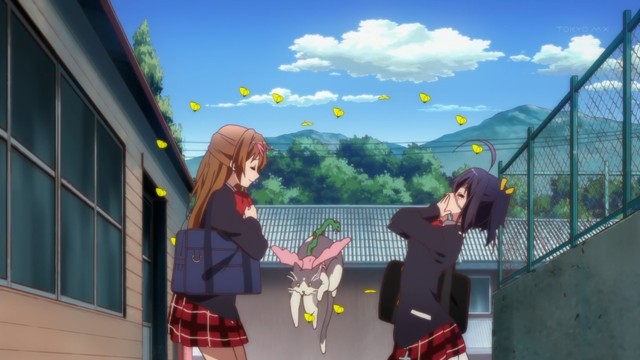 Along the way, Rikka decides to form a club and somehow manages to attracts other fantasists, including a cheerleader, an upperclassman, and a middleschooler, to her side... oh, and the Dark Flame Master gets dragged along, too.  Hijinks ensue.  Ridiculously entertaining hijinks, might I add.  There is a story being told here, which reveals itself around Ep06 or so, but it's a touching one, never angsty without good reason.  And for every angsty bit, there's humor and action aplenty, usually at the same time. 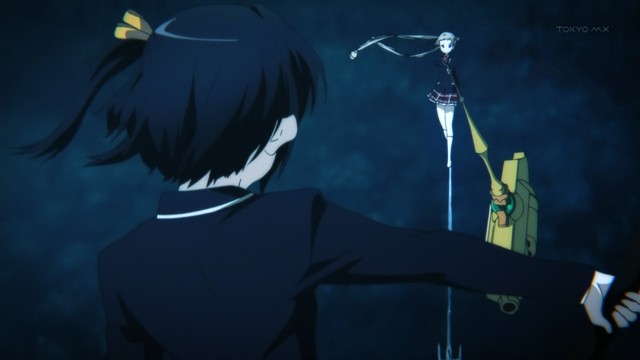 It should come as no surprise that, as a Kyoto Animation series, it's absolutely gorgeous.  Details that other companies would gloss over or ignore altogether get nearly as much attention as the main images.  Characterization is new and fresh, and I found myself actually caring about them.  For a flinty-souled duck like myself, this came as a stunning surprise. 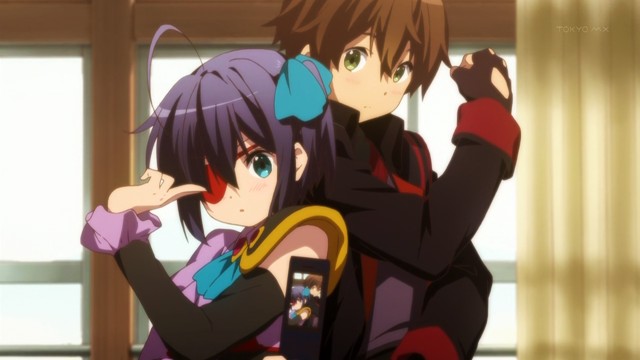 I cannot recommend this show highly enough.  Go watch it.  What are you waiting for?

UPDATE: I neglected to mention something.  Blogsuki nailed it with his description of Rikka as an opposite-Haruhi Suzumiya.  Rikka doesn't have powers but acts like she does.  Haruhi DOES have powers, but doesn't realize it.  True, there's almost nothing else similar about them, but it's an excellent observation about their respective personalities.  Haruhi would simply hate Rikka... or pity her, which is even worse.

1 I got a few episodes in and just wandered off. It's cute, it's pretty, it has good characters, I just don't know why it didn't 'grab' me.

2 Watched each ep as soon as they were subbed by Mazui. Loved it.

3 Started watching it after this post.  Just got to the scene where Rikka's house used to be in episode 7.  It was a bit heartbreaking watching her go through her "magic start up".