Why, with fanservice, of course.  How else would HSotD deal with an issue?  And it throws it at us so quickly that I had to break my introduction formatting (two or three pictures, followed by a Title screen), otherwise The Pond would suddenly become NSFW on the front page.  We can't have that, no no no, this is a family blog.  Mostly.  More or less.  How many of you realized that I even followed my own formatting rules?  It's fine if you didn't, it's not like I advertise it or anything, but these things ain't just thrown together on a wing and a prayer, y'know.  They're keenly thought out, finely detailed, nigh-on exquisite gems of literary excess.

Now for the second bit of formatting, the episode title shot just "below the fold," as it were. 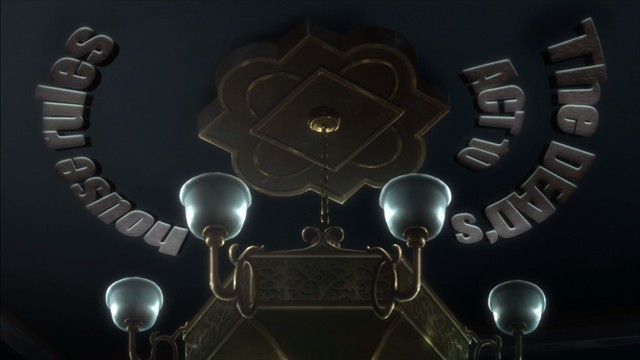 Not that there's any fold to be below, that's an old newspaper term.  Unless, of course, you're reading this on an flexible ePaper display, in which case might I suggest you put it down and visit The Pond on a real computer so you can see everything in color?  I mean, really?  You think this: 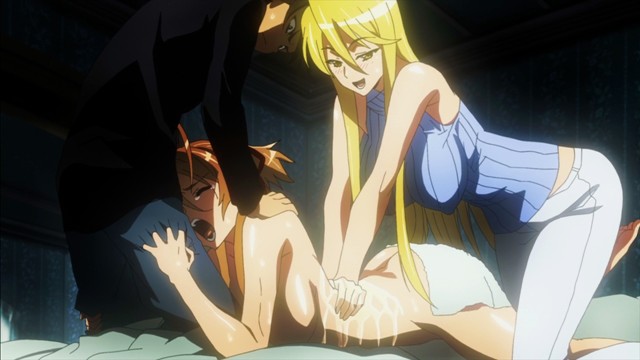 ...isn't better seen in color?  And before you come to the wrong conclusion about what's going on, remember that Rei fell off Humvee-kun at high velocity back in Ep08, landing on her back.  Her front was then used as a riflebench later in that same episode.  To say her body is sore would be something of an understatement; Our Hero is (ahem) keeping her still while Boing-sensei is applying a "secret formula" topical anesthetic to promote healing.  Akiko's jam.  Sanae's bread.  Boing-sensei's secret fomula.  God help us all. 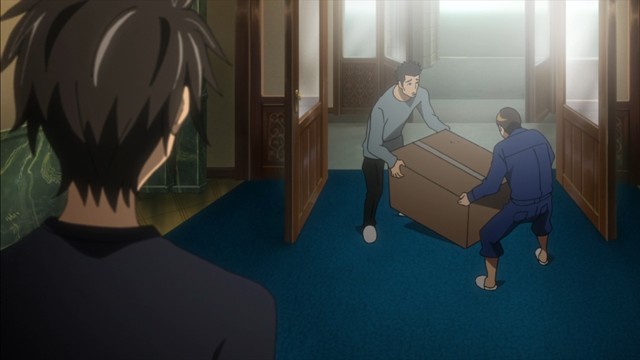 After BHR (Bug-Haired Rei) not-so-subtly hints that Our Hero could put the lotion on it's skin next time, then tells him to get out because it's all his fault her chesticological region is sore (ingrate!), Frodo wanders to a lower floor of Saya's mansion.  Here, he finds two workers having problems managing a box of styrofoam packing peanuts.  He runs over to help, but is rebuffed... this is a job for adults! 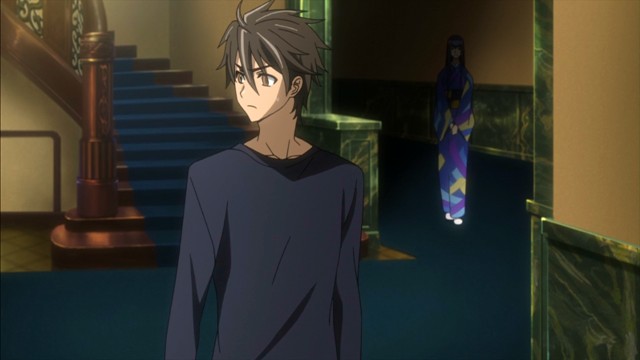 "Do you know who you're talking to, old man?  I'm Frodo, the muthafsckin' star of this show, and the leader of The Fellowship.  I've walked halfway across zombie-infested not-Tokyo, I've scored with the hottest babe to show up in this anime, and can have my pick of any of the next three as well, singly or in groups, in series or in parallel.  I'm da man, and you?  You're just a walk-on." 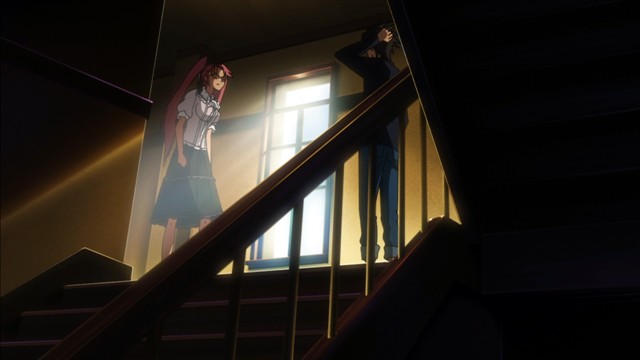 "Ahem.  Did you say something about having your pick?"
"Oh crap.  I'm dead now, aren't I?"
"No, but only because you're right."
"Oh hells yeah!"
"Baka!"
"...she's wrong, y'know.  You don't get your choice of the four hottest babes, because you don't get to pick me under any circumstances."

"Dammit.  Maybe being an adult has its perks."  As Our Hero prepares to be thrashed by Saya (again), we quickly draw a veil over that scene and move to... 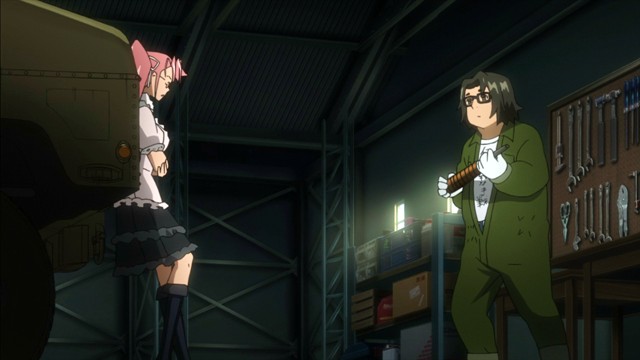 ...the garage, where we've discovered that Saya is apparently able to teleport.  Would have made some of those zombie-fleeing scenes a bit less dramatic, true, but I'm sure she wouldn't care.  Anyway, she pops in to give Hirano grief and to point out that, no matter how comfy and safe things are at Castle Takagi, The Fellowship can't stay.  Things are gonna go bad awfully fast... after all, places like power plants and water processing facilities need safe and skilled technicians running them, and only quick action by Saya's father has kept the lights on and the water running to date.  But the techies have families too, and they aren't at the power plants.  Soon enough, they're going to leave, or the zombies will get in, or something, and then what? 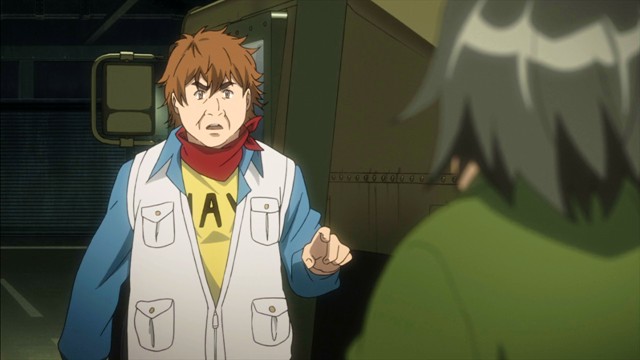 Just then, as Hirano fondles his shotgun and that's not a euphemism for anything, the Takagi family retainer mechanic, Matto, pops up and begins to give him grief.  "That's a real gun, kid, not a toy."  He then makes to take the gun away.  Let me repeat that: he's trying to take the gun away.  From Hirano.  Yeah, the ability to make good decisions is apparently not a requirement to get a job with the Takagi family. 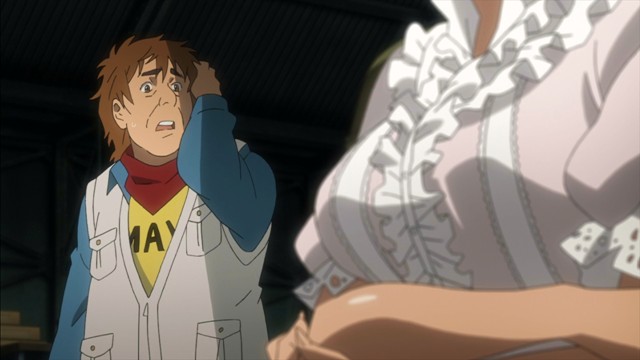 Before this could escalate to something unfortunate, probably involving the top half of Matto smeared across a wall, Saya quietly speaks up.  Matto immediately begins to stutter and stammer like a lovesick teenager... oh, and Humvee-kun is repaired.  He then runs off.  One has to applaud the production staff for their concept of the framing of this shot; their dedication to their craft is quite awe-inspiring.  Saya then decides to call a meeting of The Fellowship... she hasn't missed the signs that Adults Are Idiots. 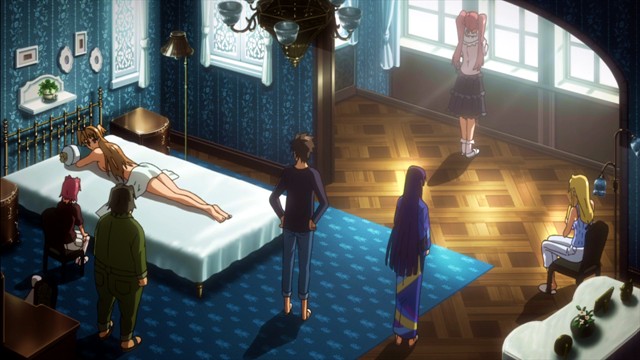 Right away, the meeting gets... contentious.  The options are pretty obvious: stay with the well-defended larger group run by Saya's parents (and become junior members of that society), or strike out on their own (and be the masters of their own fate).  Frodo suggests The Fellowship stay at Lothlorien Castle Takagi for a while.  Saya seems to support the leaving, but her opinion quickly devolves into a rant against her parents.  When things began to go to hell, her parents immediately prepared for the defense of Lothlorien, gathered their followers (wha?), and her father made arrangements to protect civil works.  They also came to the conclusion that they couldn't help Saya, so wrote her off.  Hm... yes, I can imagine one would get a little upset at that.  Her rant begins to take on an edge of hysteria, so Frodo steps in to calm her. 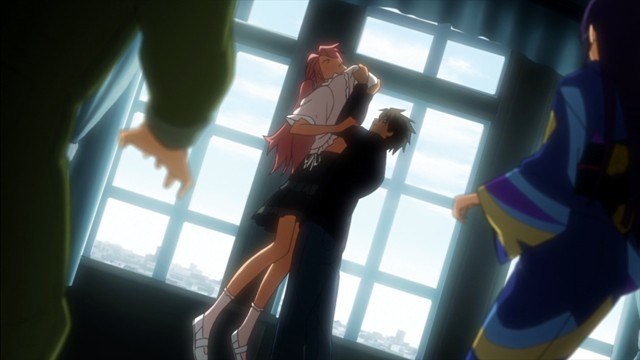 I know what you're thinking, and no, her blouse.  Really.  He starts yelling at her that she's got it good, she's the only one in that room who knows her family is okay and she should stop complaining.  After a few seconds, she snaps out of it and he puts her down.  So remember folks, if you ever come across a hysterical person, you should pick them up by their shirt and dangle them in the air until they relax.  Just let me know when you're going to do this so I can get some popcorn and come watch.  Just then, a motorcade pulls into Casa Takagi, and out steps... 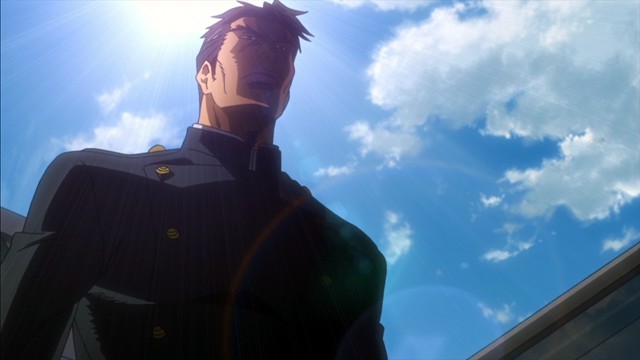 ...Saya's father.  He's the former head of a Japanese ultra-Nationalist group, which explains the subtle air of militarism that pervades Lothlorien.  He also needs a towel to mop the testosterone that drips from his brow 24 hours a day. 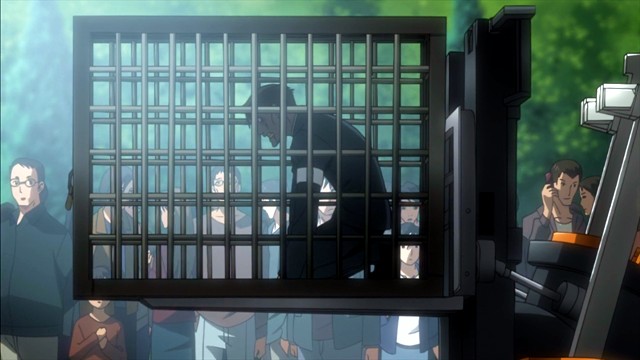 And this is his best friend.  Unfortunately, he got himself infectorated during the mission to the power plant, so Dad decided to make him into an object lesson.  Many of the people gathered at Lothlorien haven't seen a zombie before, and almost none of the civilians have seen how they need to be dealt with.  One sword stroke later and Dad gives a speech. 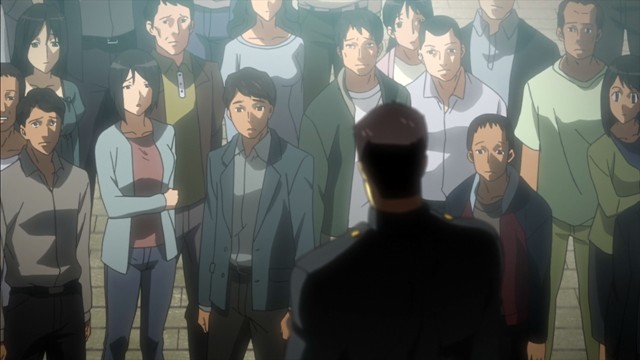 The gist of which is "Be prepared to kill any-and-everybody you know, because if they get bitten, they're no longer human."  Nice guy, Saya's dad, very light-hearted and cheerful.  On a balcony above... 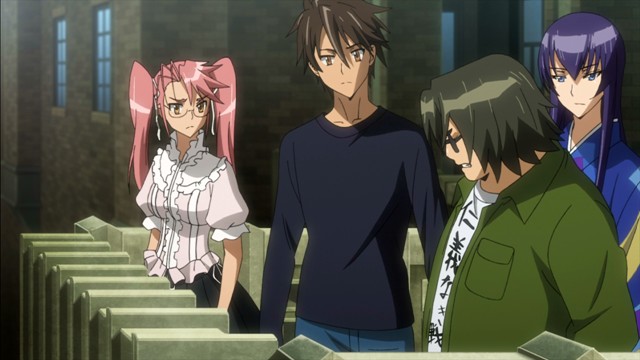 ...Hirano has his turn in the mental-breakdown spotlight, as he starts raving about how using a sword on the zombies is inefficient, and a sword can get stuck on bone and if you don't clean the blood off it'll rust and a gun is so much more superior.  When Frodo tries to get him to calm down, and no he doesn't pick him up by his shirt, Hirano shoves him and runs away.  What, has everybody gone completely insane in just a couple of days??? 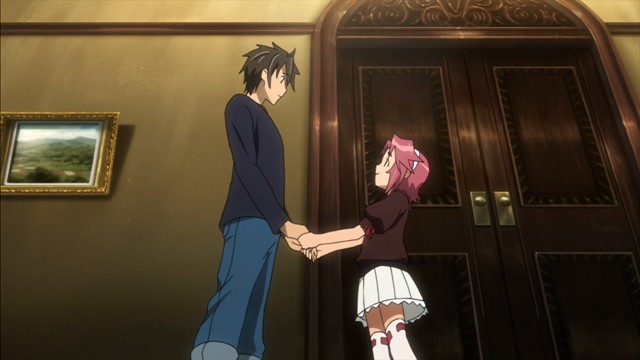 No.  Alice hasn't.  She asks Frodo if he and Hirano had a fight, and that all they have to do is talk it out and everything will be fine.  She also points out that the entire Fellowship has "gotten soft" in the few days they've been in Lothlorien.  Alice and Zeke then scurry off to find Hirano, while Our Hero compares the situation to that in Mutiny on the Bounty, what with the crew liking Tahiti so much and not wanting to return to sea and so on and so forth and it's a really stupid metaphor.  The production staff wandered away from their comfort zone (boobies and zombies), so they deserve praise for that, but the actual execution was a fail.  Oh well, no harm done because quickly Alice comes running back yelling that there's a dead vicar on the landing Hirano's in trouble.

Some of Dad's retainers have come for the guns, because he's a kid and guns are dangerous.  So what does Hirano do?  Does he A) calmly reason with the men; B) blow them all away; or C) turn into a sniveling twit with no self-esteem? 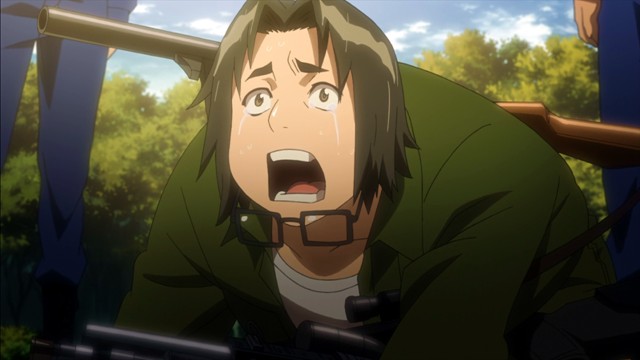 If you said "C", step up and get your... well, nothing.  The production staff has just managed to take a character that had gone from an abused and teased nothing to a calm, cool zombie slayer, and break him back down to nothing.  Good job!  As the group of men step forward to forcibly take the guns... 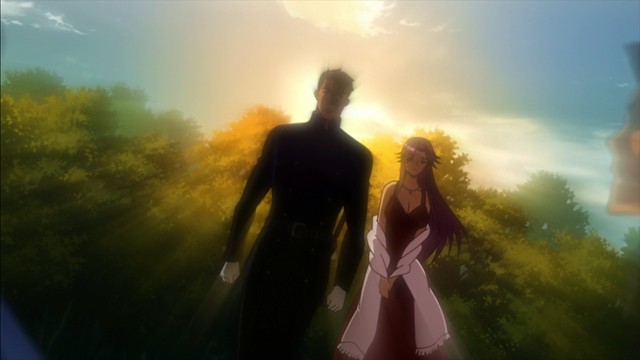 ...Dad and Mom appear to find out what the commotion is all about.  When informed by his underlings, Dad asks Hirano just what it is he intends to do with all these firearms... and Hirano is at a loss.  He stammers for a second, until... 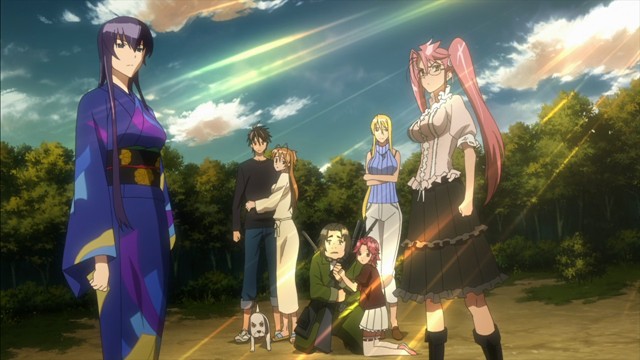 "He can protect your daughter."  The crowd goes wild, until Saya gets a nice dig in: "Unlike you, Dad."  THEN the crowd goes wild.  An intense staredown between Saya and Dad occurs as we fade to black, roll credits.

Except it's not over yet. 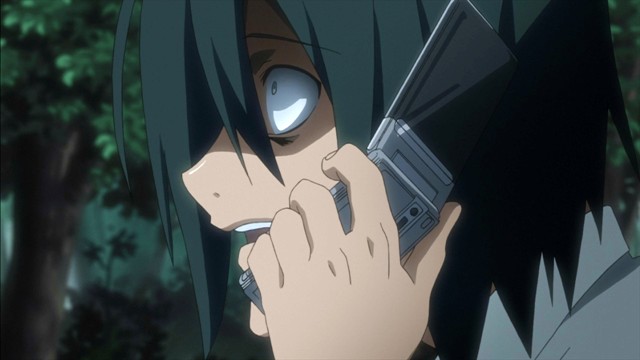 Some kid who's a dead ringer for L from Death Note is spying on Fortress Takagi, and is saying that yeah, they'd probably take them all in now.  But y'know, this kid looks somewhat familiar... haven't we seen him somewhere before?  Oh, that's right, back on the school's minibus!  But wait... Now, I'm not gonna say this was a terrible follow-up to the last episode, but man was this a terrible follow-up to the last episode.  The Fellowship is yelling at each other, Shido-kami has returned to the plot, there was only one zombie (in a cage) in the entire thing, and there wasn't even much fanservice!  I know HSotD.  HSotD is a friend of mine, and Ep10, you are no HSotD episode to me. Disappointing, I know.  Just like the rest of the episode.  The score now stands at Rei - 4, Saeko - 4, Saya - 1, SFX-sensei - 1, everybody else - nada.  Two episodes left plus the OVA, and we suddenly have a chance for a three-way tie!

3 Having met Saya's parents, will our illustrious hero get conflicted wondering if she will grow up to look like mom - or dad?

4 The sympathetic portrayal of ultranationalists was somewhat controversial in Japan. Imagine what a Hollywood remake would do with Don Takagi. Probably make him a monster like the Governor in The Walking Dead. (Hirano would be a Columbine-type psycho.)

Hirano's breakdown is in keeping with HSotD's theme, how people cope with a nightmarish situation like a zombie apocalypse. There's a discussion about this during the mall arc. Hirano is still a high school student with no combat experience. Playing the cool, calm zombie slayer is how he keeps sane in an an insane situation. Taking away his guns removes that role in addition to turning him back into an abused nothing in his mind.