High School Of The Dead Ep02 Have you ever had a bad day?  You wake up, stub your toe, slip in the shower, can't find a pair of socks that match, dump a cup of coffee on your khakis, your customers are all grumpy, the boss screams at you for nothing, your car gets a flat, the girlfriend dumps you, and finally your bed breaks and dumps you on the cat who promptly turns you into into his personal scratching post.  By the time you stop the bleeding it's three in the morning and you have to be up in a couple of hours to do it all over again.  That's a bad day.

Then there's the day Takashi and Rei are having.  The zombie apocalypse has begun, their city is in turmoil, they've seen many of their classmates eaten, and he had to put his best friend Hisashi down after he got bitten defending Rei from their Modern Japanese teacher. 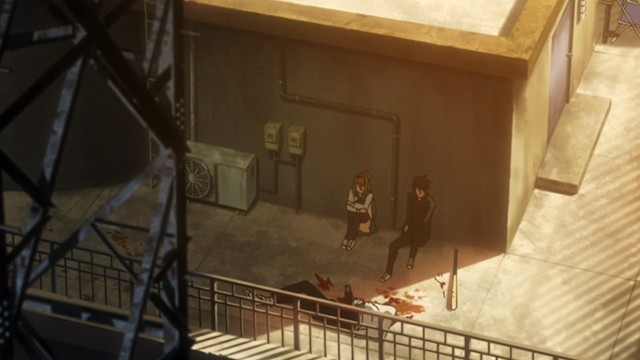 But hey, you keep mourning the loss of your quad venti skinny 170 mocha macchiato no lid double cup.  At least they have socks that match, right? 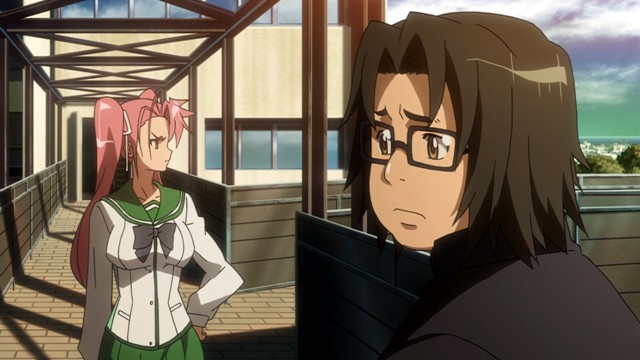 Meanwhile back in the zombie zoo, pink-haired harpy Saya Takagi has teamed up with Kohta Hirano, overweight loser and author of the Hellsing manga, and she's not happy about it.  Of all the people in the school for her, a super-genius, to end up with... he's slow, doesn't like walking, and kinda dumb.  He wears glasses.  His socks probably don't even match.  And good lord, have you read Hellsing?  What sort of twisted mind comes up with Nazi Vampires in zeppelins destroying London?  Well, there's nothing for it... 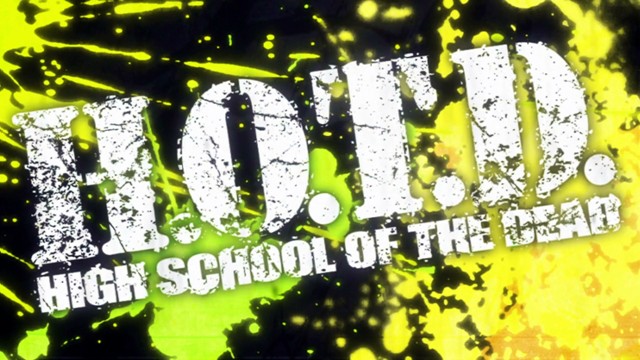 Because violence and fanservice will only get you so far. 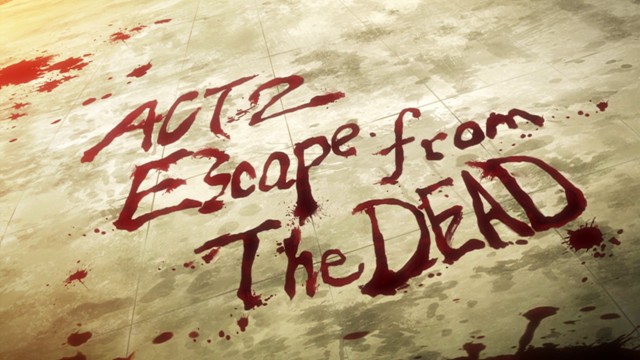 Evidence you're having a bad day #277: Zombies.  Oh, and an episode title screen scrawled in blood on the sidewalk.  Man, that's the worst... why, just the other day I left Pond Central and written on the parking lot tarmac was "Both of you, dance like you want to win!" in circulatory fluid.  I mean, really... who can expect to have a good day after that? 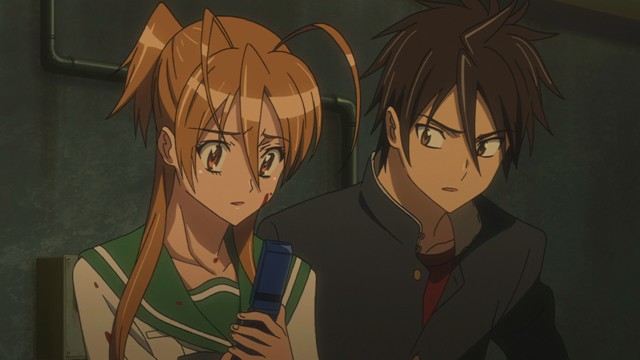 Up on the roof (it's peaceful as can be, and the world below can't bother me) Rei tries to call her policeman father on a super-duper-secret personal line.  It doesn't work very well, and she gets all weepy and her praying mantis goes limp and everything.  It's a very sad moment, except that, well, after the way she acted in Ep01, Rei is pretty far down my sympathy list. 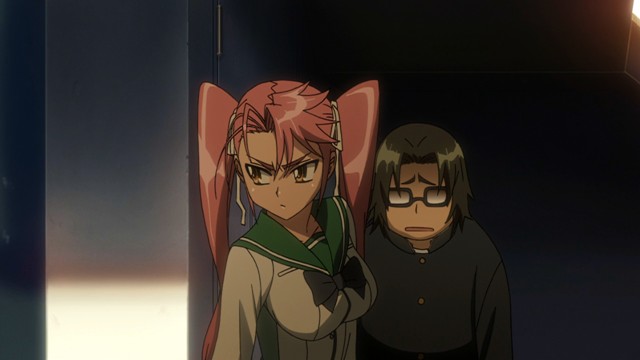 Meanwhile, Saya and Hirano have, for reasons unbeknownst to man or beast, re-entered the school and are attempting to do... something.  Maybe.  There's a lot of talking, until a zombie shows up and he's all like "I'm gonna eat you".  THEN there's lots of running away.  Just then, in another part of the school... 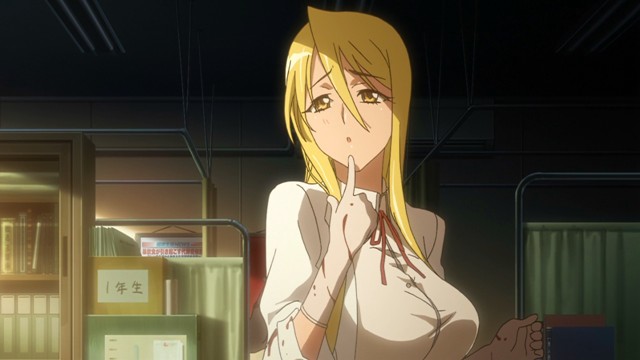 Back when I opened up voting for what show you wanted me to do episodic reviews for, I described the female character designs as "hideously top heavy."  Ladies and gentlemen, allow me to introduce the school nurse, Shizuka-sensei, aka "Boing-chan," aka "SFX-sensei," since every time she moves there's a "boi-n-n-n-ngggg" sound.  Subtlety, thy name is HSotD.  Behind her, there's a zombie being apologetically dealt with by J Random High School Boy.  He's doing a pretty good job of it, too, until... 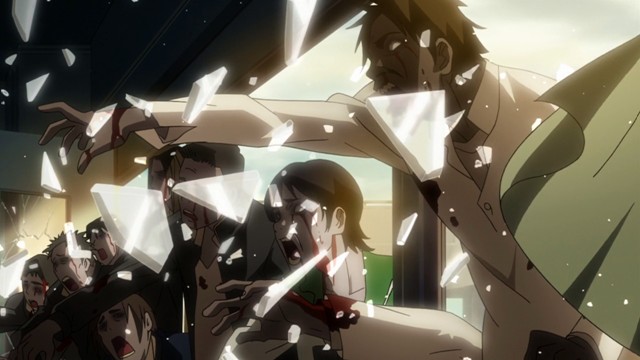 ...disgusted anime otaku, tired of ridiculously over-inflated breasts, burst in.  Or zombies.  But I repeat myself.  Whatever, there's a lot of 'em, and J Random is quickly overwhelmed and bitten.  Things look grim for Boing-chan.  The otaku/zombies, unused to actually being anywhere close to a woman, shuffle awkwardly towards her.  The end is nigh! 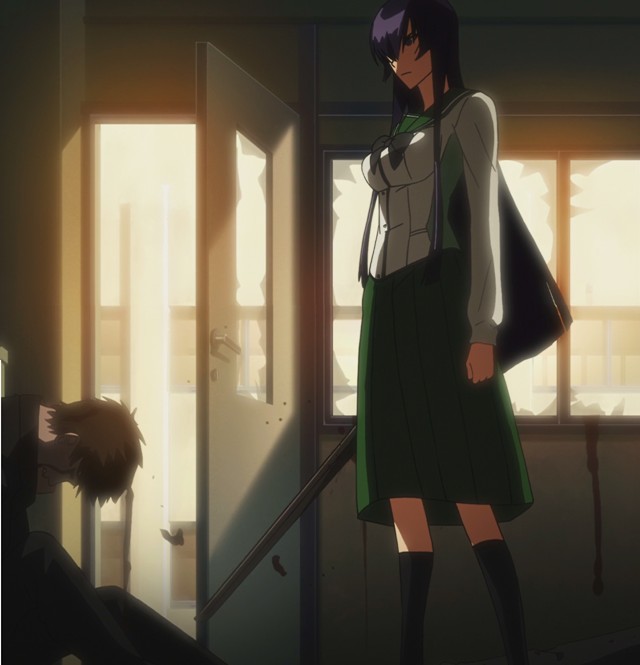 Until HSotD's best damn character shows up.  She is the women's high school kendo national champion.  The wooden sword she carries has sealed in it a secret that could dispel all the mysteries of the Yamato Chosei and the entire Japanese race.  However, that has nothing to do with HSotD.  Her name is Saeko Busujima, and she'll kick your dead ass from here to Finland... and that's just before breakfast. 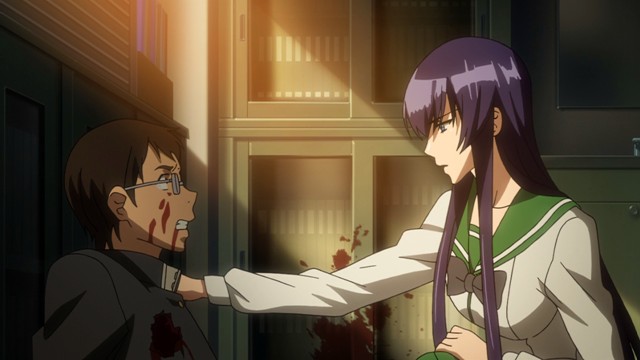 After cleaning the room of all otaku, she speaks quietly to J Random, offering him mercy if he'd like it.  Of course, he says yes... would you want to be an otaku zombie?  After praising him for defending Boing-sensei, she smacks him upside the head with her wooden sword, and just like that, he's gone.  Then more zombies show up... lots more.  And Saeko... 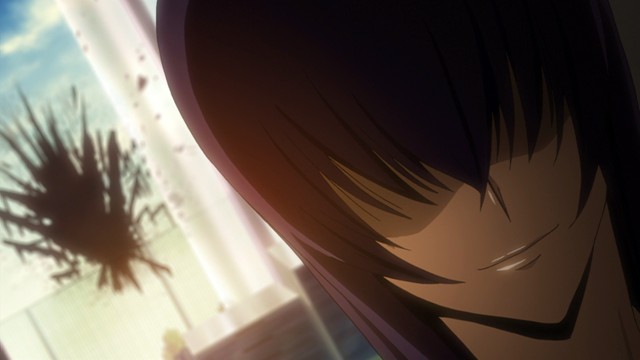 ...smiles while J Random's brains slowly slide down the window?  I think they misspelled her first name.  Meanwhile, somewhere else in the school... 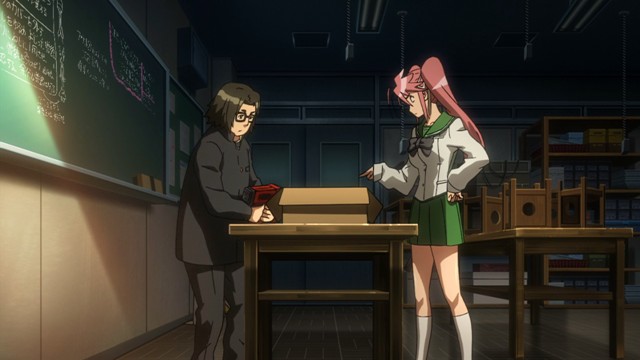 Saya and Hirano have taken refuge in shop class, where all the zombies only have eight fingers.  He's found a compressed-air powered nailgun, and she's got oversized sleeves.  I don't know why I just noticed that now, but I did.  While she continues her haranguing, a subtle change comes over him. 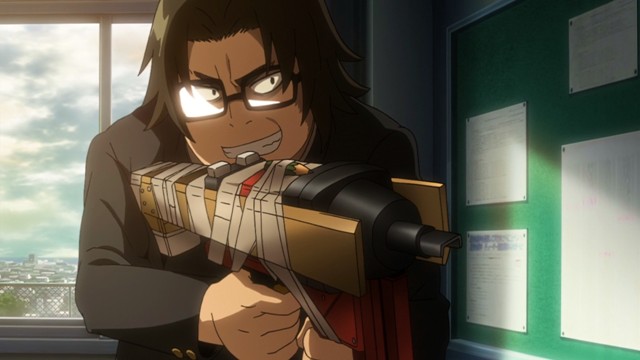 Okay, not that subtle.  Turns out he's a gun nut and quickly figured out how to jury-rig an air-nailer into a ranged weapon.  For those who might be raising their hands and saying that it's impossible for a portable nailgun to have a useful range, I humbly disagree.  Just ask any theatre techie that's participated in a Scene Shop Olympics.  You can get useful penetration out to about 12 feet or so with some brands, and substantially more if it can be hooked up to an air compressor.  In fact, the only thing I see wrong with what Hirano's done here is that the safety is in place.  See that upside-down U shaped thingy at the front of the gun?  That's the safety... that gun would only fire if the safety piece is pushed in.  Usually this occurs when you put the gun on a piece of wood that you want to nail into something else, but they're pretty simple to circumvent; a short length of wire is usually enough to do it.  From where I'm sitting, what Hirano's holding would only work if he pressed it against a zombie's head.  Anyway, enough of that: in another part of the school... 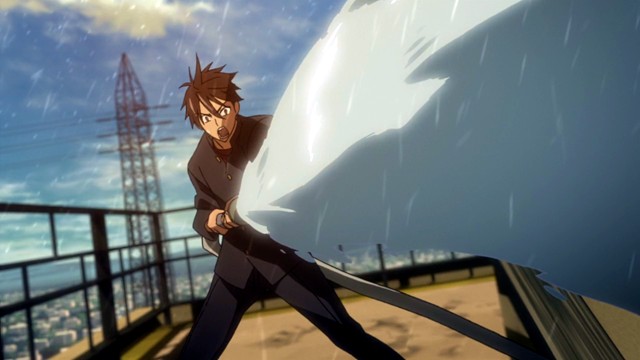 ...Takashi and the Praying Mantis have decided that the school Observatory isn't a good enough place to be, and they're making a break for it.  It was Rei's idea to use the fire hose, the first sign of functional intelligence from her all series.  Then she has to go ahead and mention Hisashi again, and they both get all depressed.  Fortunately for them AND us, there are some conveniently positioned zombies between them and the stairwell. 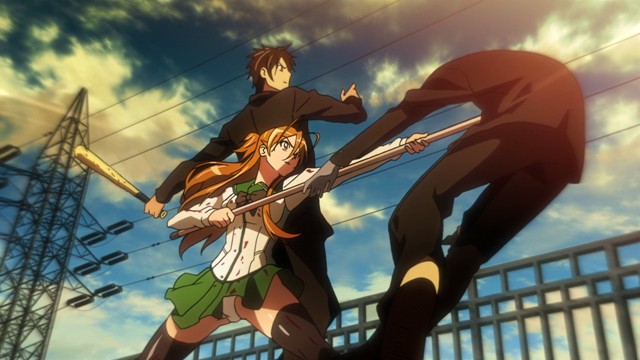 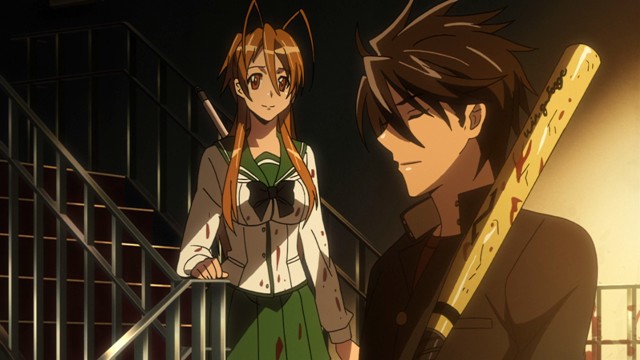 After gaining the relative safety of the stairs into the school, Rei finally thinks to ask where they're going to go?  "Home."  They're going to their houses, and they'll help survivors along the way.  Rei's all excited about this idea, but Takashi?  Not so much: dad lives away from home due to his job, and mom... mom teaches at an elementary school.  Just think... hordes of cute widdle zombies all over the place! 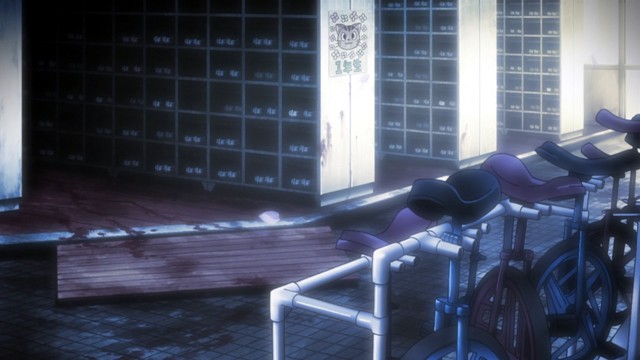 Cute widdle zombies riding unicycles by the look of things.  I had no idea that unicycles were so big in Japan.  I'm not sure that I can think of anything more terrifying than a pack of zombie eight year olds riding unicycles, except maybe a bear that looks like Teddy Roosevelt riding Abraham Lincoln with laser eyes into bloody combat.  Oh wait.  While you tremble in fear at that image, let's see what Sniper and Pink Haired Harpy are up to... 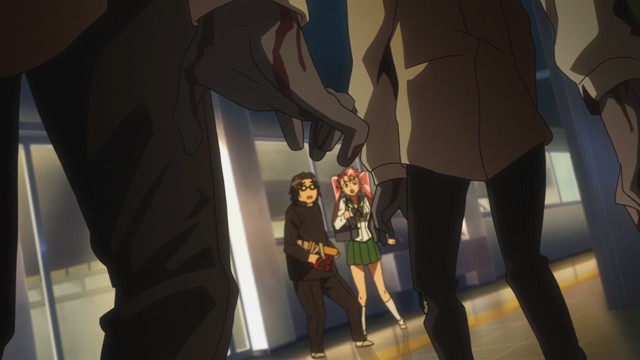 After figuring out that the zombies react only to sound and not to vision or touch, Saya lectures Hirano loudly and at length.  Of course, this attracts every undead within the tri-county area.  Good going, genius.  At that very same instant... Boing-chan and Saeko are heading to the school's Staff Room... it's where everybody leaves their car keys, after all.  Along the way, the Terminatrix pointedly doesn't destroy every zombie they come across... after all, that might slow them down long enough to be swarmed under.  Speaking of being swarmed under, a loud scream suddenly echos through the hallways.

The two teams of SFX-sensei and Saeko, and Takashi and Rei hurry towards the source, arriving at the same time to a horrible sight. 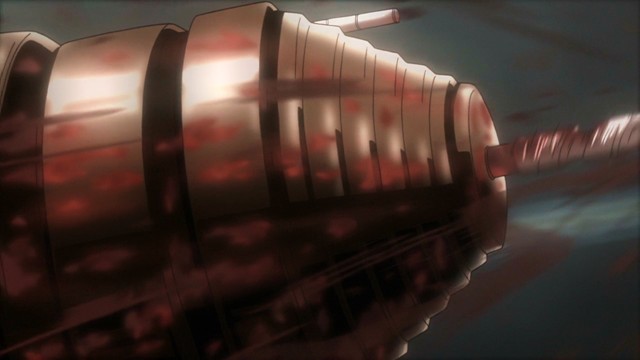 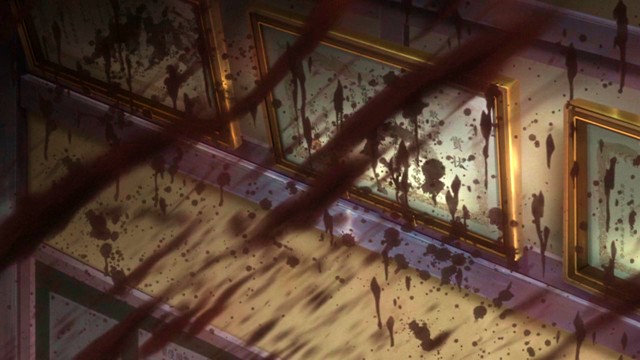 Eeeee-yuck!  Though I admit to being greatly amused by the sound of the drill; someone needs to tell the Foley artists that battery-powered drills, no matter how big, do not sound like jackhammers.  But while the Pink-Haired Harpy has her moment of terror, there are still more undead nearby, and Hirano is out of nails. 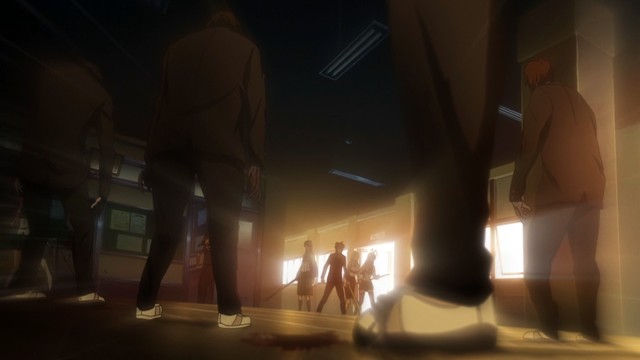 Our two bands of adventurers team up to take on the baddies.  You can guess the results of that little fight, right?  Right.  Let's quietly draw a veil over the massacre and-

Can somebody please jiggle the Saya?  She seems to be stuck. And broken.  She wants her mom, which nicely echos the thoughts of just about everybody else.  Grim looks all around.  It's actually quite a powerful moment, full of raw emotion that the viewer can fully comprehend, even though they've probably never been in a zombie apocalypse.  Jump-cut to...
...the epilogue.  Our Band of Heroes has made it to the Staff Room, they've barricaded the only door, and are relaxing for the first time since the world came to an end.  They've even found the keys to one of the school's mini-buses, so they've got enough transportation for all of them together.  Everything seems to be looking up... ...until they turn on the TV just in time to see a live remote get eaten by the undead... which the government is calling "civic unrest."  Sure, let's go with that.  Fade to black, roll credits.

Hard to recap this one, since it was almost entirely action.  Good followup to Ep01, though not as good an episode in my eyes.  Still, we've gotten the Party together, time to go do some dungeon crawling!  Or... um... something like that.  That, my friends, will come in Ep03!
FANSERVICE SHOT OF THE EPISODE: 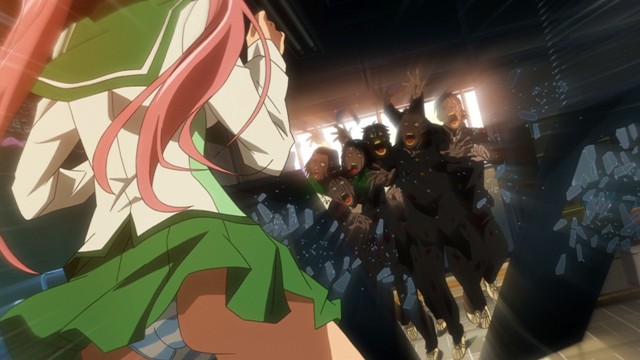 Not as good as last week's, to be honest.  Still, it was either this or a shot of Saya putting on her glasses for the first time, and I decided to go with the more common fetish to appeal to a larger audience base.  I'm nothing if not all-inclusive.  The score is now: Rei - 1, Saya - 1.

1 *wild applause* A bravura performance, sir, chock-a-block with side references and clever by-play.

And I'm typing this comment while "Big In Japan" winds down...

2 I didn't notice the sound effects.  I'll have to re-check that.

3 Glasses...you denied us glasses for an underwear shot. I haet u.

5 Bickmuppet, are you forgetting that Kohta Hirano is wearing glasses in very shot?