Her Eyes Back in 2008 or so, I was flooping around after finishing up my first AMV, "...Angel", feeling like I needed to make another one but not having any inspiration.  Oh, there were a couple of aborted attempts, but nothing that got any farther than a couple of clips on a timeline and call it a day.  Then there was a Formula 1 video I thought about doing (F1MV?) and never got around to... and then my copy of Adobe Premiere went away in a virus-induced format-and-install, never to be seen again.  Of course, it was then that inspiration sneaked up behind me and whupped me upside de haid but good.  And like with the first AMV, it happened at the Duck U Bookstore.  Since it's been nigh on seven years since then, I don't remember what I was doing at the time... probably folding t-shirts because t-shirts always need to be folded, that's what they're for... when a song came on the instore music system.

As with the first time, it had less to do with how much I liked the song as how the entire AMV sprang to life in my head as the song went on.  That I did (and still do) like the tune is an added bonus, something I can't particularly say about "Lips of an Angel", the song I used for "...Angel".  Certainly by the time I was done, I hated that drippy piece of musical treacle.  There was one huge difference between the two ideas, though: I had Premiere the first time lighting struck, and I didn't the second time.  The constant badgering of my brain trying to get me to make "Her Eyes" into the AMV in my head drove me to make some... unwise... decisions on the downloading front, not that my antivirus programs did anything to help matters.  Antivirus matadors, more like it: "oh look, a virus?  Ole!"  Anyway, after being unsuccessful on many fronts, I decided to make an effort at tabling my brain's nagging for a while.  And then The Dark Years occurred.  2008 and 2009 were particularly horrible experiences, and while 2010 and 2011 were remarkable for blog output (all those writeups!), the AMV faded, stored away in a closet somewhere in my brain.

Jumpcut to a few days ago.  I've put the entirety of my "loose tunes" music collection into one mega-playlist (iTunes suggests that I can now go 47 hours straight without hearing a repeat, and that's without any of the hundreds of albums included), and I've hit the shuffle setting.  I'm sitting at the computer doing... something and the music is playing, playing, playing and... a song comes on.  And the lightning bolt strikes again.

Indeed, by the time he hits the first chorus, there were tears rolling down my face.  Not because it's a sad song, but because of how intense my brain's reaction was.  If you've never had a serious "eureka moment" like that, I literally can't explain it to you.  If you have experienced it, you know exactly what I mean and I don't need to explain it.  It certainly doesn't have to be AMV-related... authors and woodworkers, papershufflers and athletes, bloggers and... uh... people who do real things can all get hit by such inspiration.  I've been truly honored to have it happen a few times (not all AMV-related), and I hope it'll happen again in the future.  "But", I hear you screaming, "what's the damn concept, Wonderduck?"

Some years ago, there was a fairly popular anime, spawned a damn religion, come to think of it... maybe you've heard of The Melancholy of Haruhi Suzumiya?  I can hear you groaning to yourself, but remember this: the concept for this AMV came to me in 2008, well before the second series, well before Endless 8, well before the movie and all that jazz.  It was still fresh then.  Of course, people hyped the new series to Pluto and beyond, then were disappointed when it only reached the Moon, but that's beside the point.  One thing that really drove people loony in a good way was the first series' ED, what with the dancing and the choreography and the glavin and...  ...but y'know, I was always struck by an image from the OP.  To whit, this one: 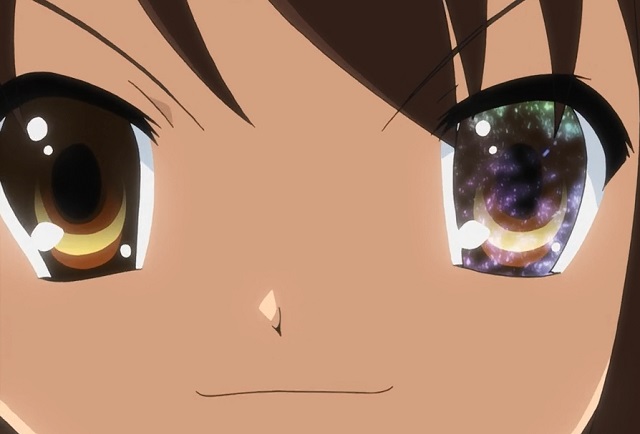 The universe in her eye, as we find out when we zoom in closer and discover stars and galaxies.  It's a great image, and the song fits so perfectly with it I'd almost think that Pat Monahan had seen the series.  And the intervening years, quite honestly, have done nothing but made it easier to make the AMV... after all, it's more than doubled the available source material, and in the process solved the one blank space I had in my mental storyboard (how the hell was I going to do "tells me that she's lived about a hundred lives..."?  Well, now I know!).

The one, nearly trivial, aspect of the creation of the AMV is that I still don't have a video editing program worthy of the name.  Or any idea how to extract video from mkvs.  Or time.  But those are all minor details.

The lightning has struck again.

1 I can get video out of mkvs no problem.  Can't help with a video editing program.  I still use virtualdub for the little bit I have to do.  Apparently VSDC is the new darling of freeware.

2 There's some pretty powerful open source video editors now and much trialware, but back when I was fansubbing (sheesh, must have been about a decade ago)... I did it all with handwritten AviSynth scripts and heavily hand modified SSA scripts.

3 I made the mistake of installing and trying to get the hang of Lightworks when I decided to make my recent silly-little-video.

Ended up in Windows Movie Maker. Which... is not good enough to make AMVs with, period. I'm at the point where shelling out for an older version of Premiere Essentials may be what I have to do, when I get to a point where that's an option.

4 I'll be interested to see what you come up with!

5 Kayle, do you have a name or two for those freeware viddyeditors?

GD, that's why I said I don't have a video editor worthy of the name.  I DO have WMM, though.

Banshee, you and me both.  The video in my head is great; it's just a question of whether I can make it happen IRL.

6 I haven't used any substantial video editor in some time, heck I never used any major video editor back then either, I used VirtualDub with hand crafted AviSynth scripts for the effects and editing, with I think it was the VobSub filter for SSA scripts for typesetting. These days I use AviDemux for what I used to use VirtualDub for, though in almost all ways (except codec compatibility) it's worse than VD. I started to google about free/cheap video editors recently since I'm feeling very constrained by AviDemux.

From what I've read, Blender seems to be the most powerful open source video editor--it's actually a complete 3D animation environment which happens to include an NLE video editor.

7 Gah! You're reminding me of that rough-cut video I dropped two hard-drives ago.

8 It gets worse... a different inspiration hit me this morning while at work.  I'm not sure there's enough material available to make it happen, but it'll be fun to find out.