Gakkou Gurashi! One of the few shows I was honestly looking forward to this season was a little something called Gakkou Gurashi!, which more or less translates out to "Living at School!".  It follows the hijinks of four students as they make their way through their highschool years in a slice-of-life manner.  It had cute artwork, reportedly an outstanding story, and... well, heck, you know me: slice-of-life is right up my street.  And so are spoilers, but you probably realized that already. 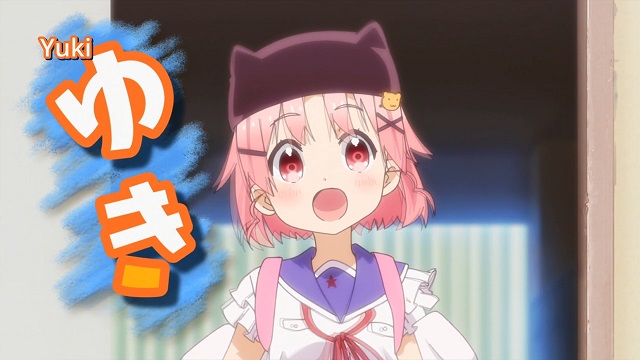 This is Yuki, our main character, and yes, she's supposed to look like that.  She's specifically designed to take most of the best (worst?) characteristics of the super-cute uber-moe school girl and package them all in one person.  Throw in "genki" and "bonkuras" and you've got Yuki.  You expect her to bonk herself upside the head while winking at any moment, and god help you, you'll enjoy it... you might hate yourself every second, but you'll enjoy it anyway.  Yep, she's like that. 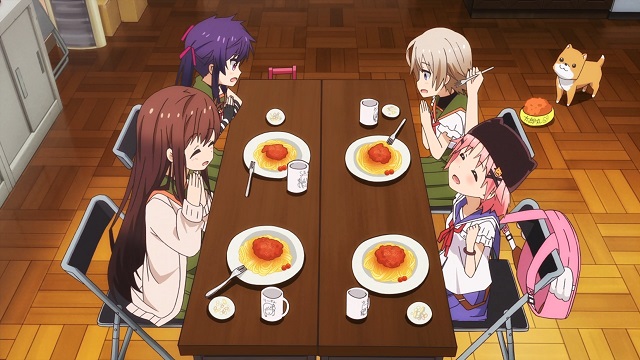 These are her friends at school.  Yuri is the one in the sweater, Kurumi is the twin-tailed girl, and Miki is the blonde, who is Yuki's "protege".  The puppy up there is Taroumaru, and he's basically Yuki's.  Yes, that is spaghetti they're eating, and yes, it is the morning. 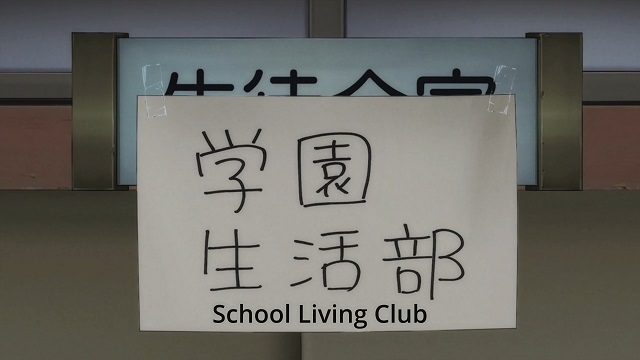 And before you ask, yes, yes they are at school.  They're members of the "School Living Club," a bunch of kids who love school so much they never leave.  Uhhhhh... okay.  Though to be fair, I've seen stranger things in anime before.  Still, the handwritten sign is a little... odd?

After her spaghetti breakfast, Yuki hurries off to class. 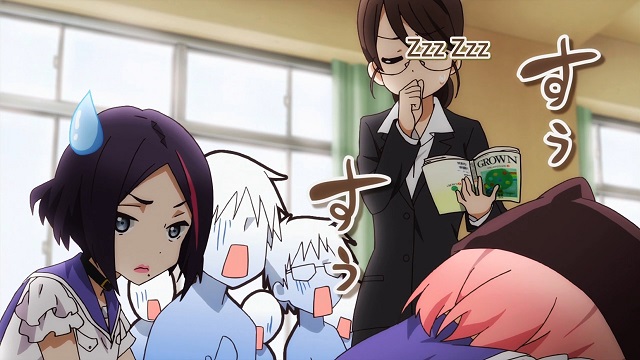 Yup, she's that type of character.  Bonus points to the show for not putting her in the traditional "anime main character seat."  Most of the class is drawn in the more-or-less faceless style shown above, which both saves time and money, and kinda tells you something about Yuki... she may not be the sharpest tool in the shed.  Most classmates are... um... let's be kind and call them "transient"... to her. 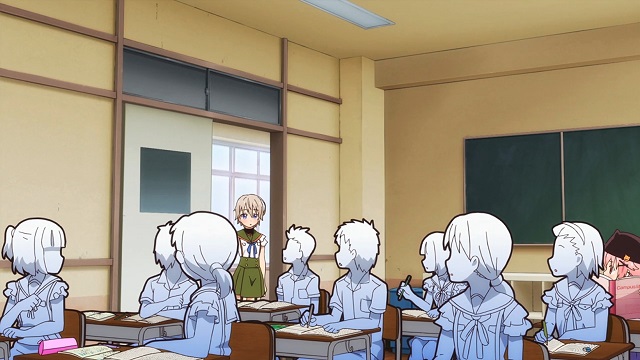 However, if Yuki's a few teeth short of a full dental plate, what does that make Miki?  She comes charging into the room, yelling for Yuki in a way that should earn her detention for life.  I mean, even in anime there are rules about that sort of thing.  After being chastised by her sempai, she leaves... and Yuki feigns an upset stomach to "go to the nurse."  The teacher knows... knows... it's a ruse, but the rules must be followed and Our Heroine is allowed to leave.  It turns out Taroumaru has gone missing!  Frantic searching leads to a wacky chase through the school... 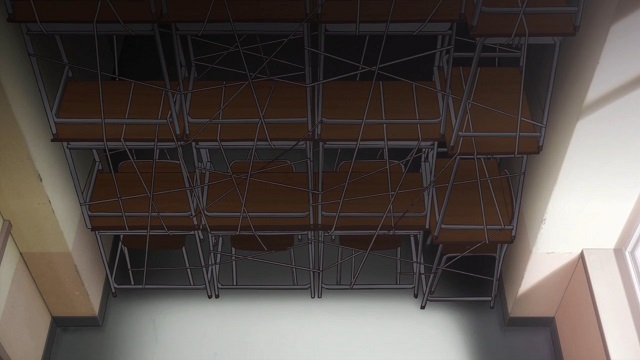 ...past this stack of desks and chairs, and into the Home Economics classroom, where again, Miki just barges in.  Yuki scolds her for a second time, and one begins to think that Miki has the manners of a particularly ill-tempered water buffalo.  We're talking Haruhi levels of intransigence here. 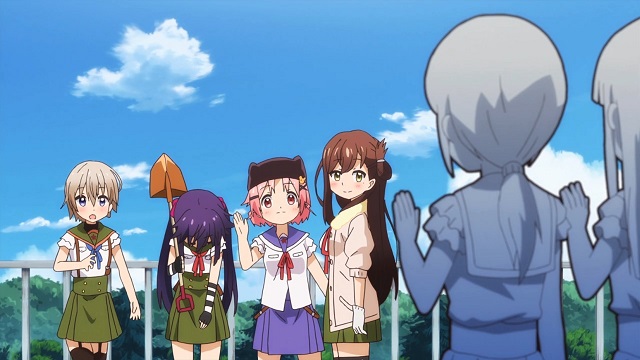 Eventually, the chase leads to the rooftop, where they manage to disrupt the proceedings of the Gardening Club.  Yuri and Kurumi were up there already, growing and digging and planting and picking and all that sort of stuff, and yet they still bow contritely and apologize to the club members.  And yet again, Miki is slow off the mark, not taking the hint to apologize until well after everybody else.  For someone with such impressive zettai ryouiki, the production staff is going to great lengths to make us see her as quite the oaf.  Eventually, the dog is collared (heh), and everybody meets in the School Living Club's room for dinner... when Yuki realizes she left her backpack and homework in her classroom.  Miki, being the good little junior, follows along. 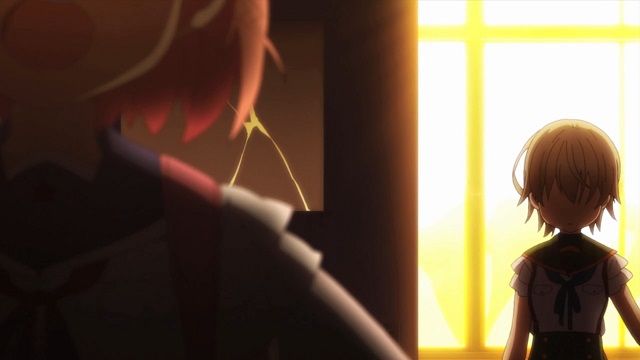 When she catches up to her sempai, she finds her in conversation with her classmates, about how cute Taroumaru can be and how great the School Living Club is and how much she loves her fellow club members and how wonderful the school is... 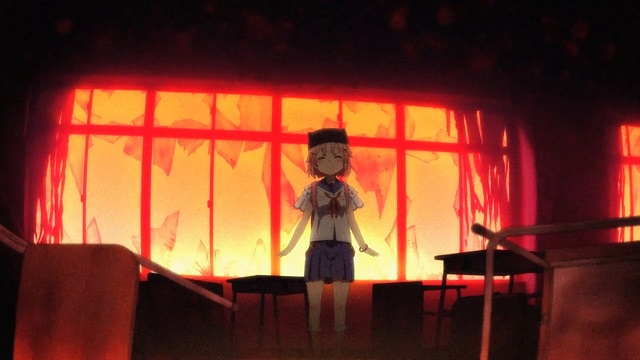 ...which is interesting, since there's nobody else in the room with her.  And the room is a mess.  And there's dried blood everywhere. 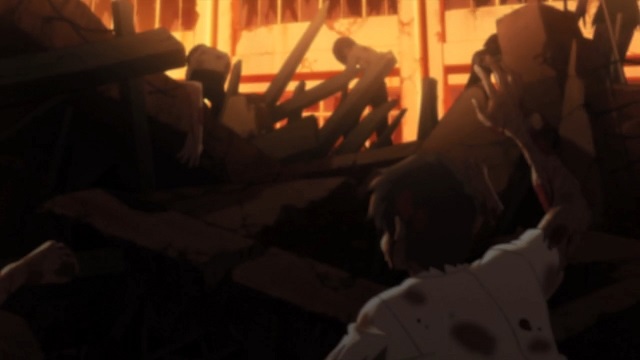 Oh, and there's zombies in the school courtyard.  It's very clear that this is not a new thing, either. 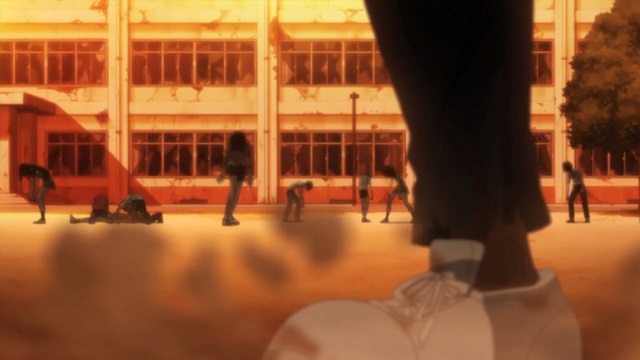 And the school is trashed.  And that stack of desks and chairs is actually a barricade to keep the undead horde out, not Taroumaru in. 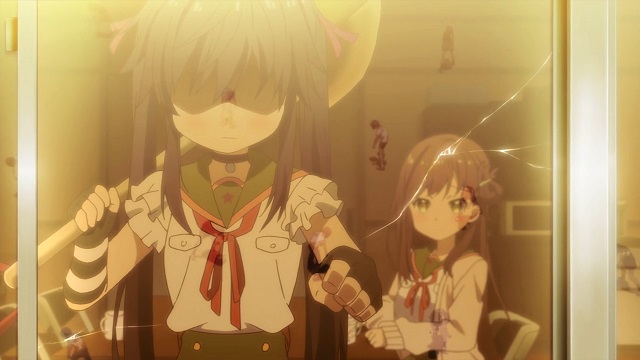 And suddenly the little weirdnesses fall into place and make sense.  The handwritten signs.  Spaghetti for breakfast.  The apparent boorishness of Miki.  Yuki's faceless classmates.  They're all in Yuki's mind... and the School Living Club is exactly that: a club for the school's LIVING.  The other three girls are trying to help their broken friend out by playing along when she's around, and sometimes Miki forgets.  And this cute little uber-moe show has just become High School of the Dead: Those Left Behind.

Even knowing there was a big plot twist coming, I was still impressed at how the Production Staff pulled it off.  I can only imagine what it would be like for someone who was blindsided by it!  Either way, Gakkou Gurashi!'s first episode certainly lived up to both the hype and the expectations, and I'm eagerly looking forward to next week's show... they've got a whole new world of stories to play with, and I'm interested to see where they go with it.  If it's good enough, I might just be forced to make it into a full series write-up!

The parallels with HSotD are obvious, of course: zombies and high school.  Where the older show is about escaping and taking the offensive, GG! sure looks like it's about staying put and surviving.  Two different strategies, neither of which in the long run has any chance of working.  That's the problem with the zombie apocalypse: in the long run, it's hard for them to lose.  What chance do four more-or-less everyday girls barricaded in their school have against them?

Guess we'll be finding out!

2 Yes.  Although it's nowhere near as dark as you think.

The first 20 minutes of this episode are very light, very fluffy, just cute girls doing cute things in cute ways.  Yes, there are little hints here and there... why is Kurumi so fascinated in keeping her shovel sharp?  Oh well, just your average weird anime character, tra-la-la... but really, it's as cute as a Chiyo-chan-centric episode of Azumanga Daioh (think of the cooking scenes!) though hardly as good.

Then the final four minutes are as depressing as ep09 of Ga-Rei Zero, when everything is grim, everything is dark, and everybody has a toothache.

The effect is... jarring.

3 I think I'll stick with my other picks this season... *shudder*