Ga-Rei Zero Live Action A Go? Maybe! Potentially exciting news from Japan, where it was revealed that a live action version of Ga-Rei Zero is in the works.  Brickmuppet will have more details, since he's the one who did most of the legwork on tracking it down; I just heard little rumors.  Considering the lack of information in English, I defer to his knowledge of Japanese on this one.  If it's true, I'm going to be one happy Wonderduck.

Actually, GRZ would make a fine movie... plenty of action, drama, even a romance if they want to try and work it in.  Even if they didn't, there's plenty there to work with.  Just the main "Schoolgirl in Black vs Everybody Else" storyline would make for a fun action flick.  I'd think they'd do away with the twins, Nabuu and Nabuu, Isayama (the guy with the drills), Kazuki (the one who dies... well, one of 'em.  The guy with the multi-barrelled briefcases), Motive Power Kiri-chan and The Boss with her Rocket-powered Wheelchair of Awesome, even Kagura's friends on the swim team, all of 'em gone.  Which would be a shame, because c'mon, they're what makes GRZ so much fun.

But the Monochrome Schoolgirls and Mr Laser Weasel would surely be in there.  I wonder if they'd even bother to do the "Spiritual Beasts", and just stick with the sword-fighting.  THAT would be a huge mistake, but it would save them money on special effects.  It would also be like doing Death Note without Ryuk.  Or Evangelion without EVAs.  Or NOIR on American TV.  Oh, wait...

I don't know that there's another franchise I'd be more willing to see Live Action-wise, come to think of it.  It's not like Kanon would be a good candidate, or HidaSketch.  You could do a Live Action version of ARIA, but it'd fail so hard I can hear the producers jumping out of windows right now.  Maybe LA Fate Stay/Night?  I'm willing to bet that Glico is more than willing to work with the production, though... particularly if there's a chance it'd get a US release.  Pocky from sea to shining sea!

UPDATE: Brickmuppet is still working on his post, but he sent me a pic of Yomi (aka "Schoolgirl In Black") that he found... click on the "more" link.

ANOTHER UPDATE: 'Muppet's post is here.  I must have misunderstood him, because he's saying it's gonna be a TV series, not a movie.  He also says that it'll start with GRZ, then go on to cover the manga, Ga-Rei.  While I'd rather see the manga turned into an anime, Live Action is perfectly okay too!  I'm sure the producers right now are saying "*whew* Wonderduck approves!  We were scared."

THIRD UPDATE: Muppet spills the beans.  It was his idea, though, and I've got the e-mails to prove it. 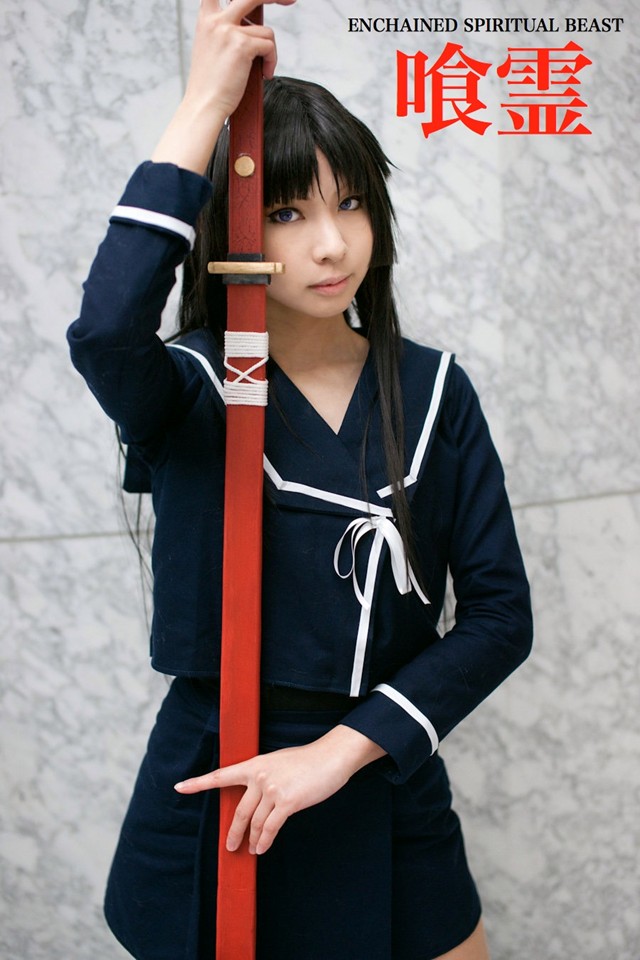 My first reaction was "eh."  My second reaction was "Wow, that's a good Yomi."  About as good as you're gonna find in an anime-to-human conversion, actually!  If the rest of the casting is that appropriate, it'll be gold!

1 Please, please let them keep the "eating Pocky sticks in a Hummer" scene...

2 According to the Muppet, it's got a late-night broadcast slot; in theory that should allow that particular scene through.  Assuming, of course, that Japanese TV censorship rules are roughly the same as they are here.

Though to be honest, the scene doesn't really show anything that hasn't happened in US prime-time TV already.

3 You made an April Fools joke of Ga-Rei Zero?

I should have suspected fowl play from a Bears-cheering duck...

4 Sorry to get your hopes up, Siergen.  Trust me, I'd like it to happen too.