Visual Novel Review: Go! Go! Nippon! I'm not what I'd call a "gamer" by any stretch of the imagination.  Make no mistake, I do play computer games, sure, but I'm not one of those hardcore creatures who eat and sleep videogames all the time.  We have a few of those at work actually, and they're great fun to talk to.  They accept me as one of their own, ever since I recognized Vault-Boy on one of their cellphone's lock screen.  I haven't been able to talk to them recently though, as the three of them are playing Fallout 4 like they'll die if they don't... and talking about spoilers.  As I've managed to avoid all details of the game except those given in the first Official Trailer, their conversations tend to send me screaming from the break room.  I have a feeling that I'll get into the game the same way I did Skyrim or Fallout 3 once I obtain a copy, though.  But I'm not a heavy-duty gamer.  One particular type of game that I've never really gotten into is the Visual Novel, though I've played a few.  If you've never played a Visual Novel, understand that it's not a "game" the way, say, Mass Effect or Portal or Pong are games. Most of the time, you're just reading words on the screen much the way you read a book. Upon occasion, you have the ability to influence the course of the story by making a decision ("Go to sleep" or "Go out and party"; "Invade Russia" or "Invade Britain"... that sort of thing).  For the most part, VNs are distinctly Japanese, and some very good anime series have been made from them.  Kanon, for example, was first a VN... I tried to play it, but I got a nasty virus from the copy I obtained.  I did manage to play some of Clannad, but never came close to finishing.  On the whole, in fact, the few VNs I've played, I've given up on long before I completed the storyline/s.  Ironically, the two that I have finished weren't actually Japanese!  Katawa Shoujo was made by a volunteer group from all over, and Sakura Spirit by an American company; both were written in English.  Which brings us to the subject of this review. 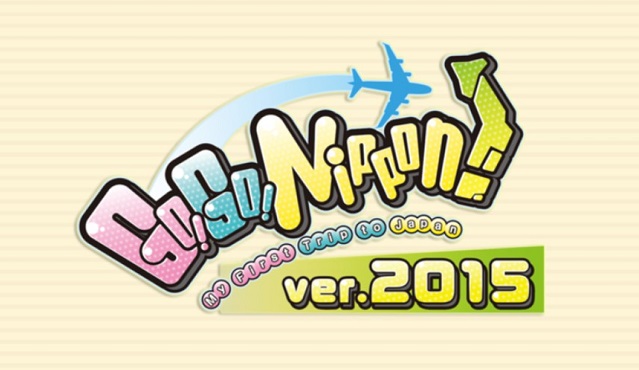 Go! Go! Nippon! (GGN) was released in 2011 by Overdrive, a Japanese company.  Unlike pretty much every VN ever, it was developed exclusively for the overseas audience... English speakers, primarily.  Shortly after I was disassociated with my position at the Duck U Bookstore, I stumbled across a promo video for GGN on Steam.  Amused, I put it in my Steam Wish List for later perusal... and then it went on sale last Thanksgiving.  Five dollars later, it was in my library.  I enjoyed it, but it was short... five hours got me through the entire thing.  Eh, fair enough.  I then put it aside and never touched it again.  Until recently, that is.  Y'see, about a month ago Overdrive released what they called DLC for the game.  In reality, it was an almost complete rework of GGN.  As it, too, was only a few bucks, I bought it.  So what's it all about? 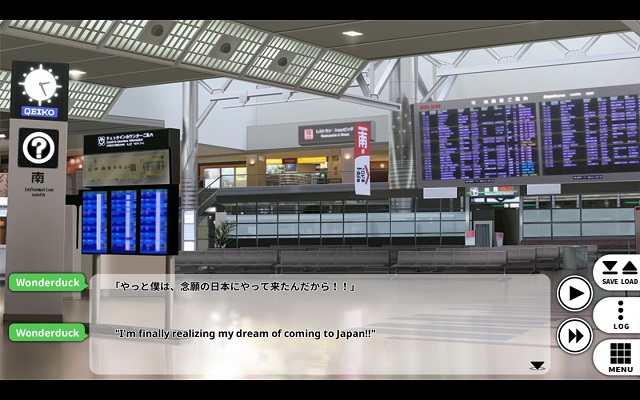 You've managed to save enough money to buy a plane ticket to Japan and still have some spending cash, too.  Even better, via chatrooms, you've met two brothers, Makoto and Akira, who have offered to let you stay with them in Tokyo for the week you're there.  Except there's a snag... they aren't brothers, they're sisters. 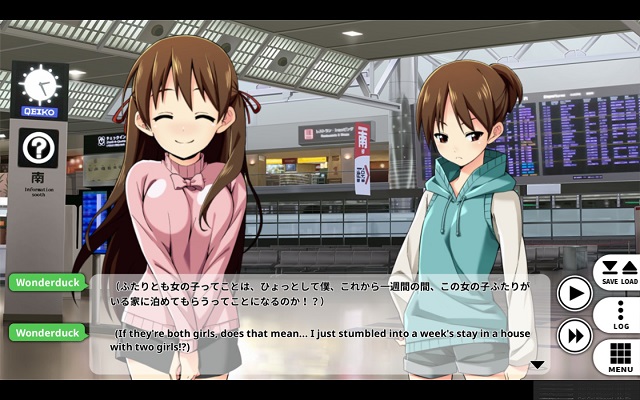 Yep, [Unnamed Protagonist] knows what's important in life.  And just to clarify, Makoto is the one in pink, while her sister Akira is in blue.  So what we're looking at here is a bog-standard setup to one of any number of bad dating sims, right?  Well, yes, but there's a secret to GGN... it's not a dating sim. 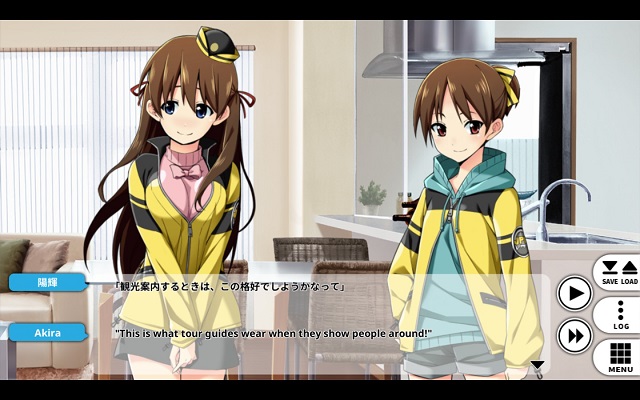 It's a travel guide!  That's right, the majority of GGN is spent visiting landmarks and tourist spots in and around Tokyo, with one of the two girls playing the role of tour guide.  You wanna know something else?  It kinda works. 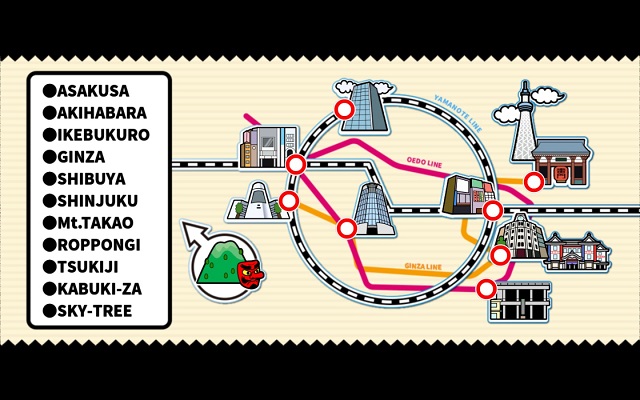 Like any vacation, you don't have enough time to visit them all, so you must choose wisely.  You get to choose three locations ("days"), plus two days spent on a trip to Kyoto.  Along the way, you get to learn how a lot of the things we here in the US take for granted don't exactly work the same way in Japan... ATMs, for example, are not common, and convenience stores ("konbini") come off as being more like teeny tiny department stores.  And that's all well and good, particularly since this is supposed to be a travel guide in VN form, but the true meat of the thing is the various destinations. 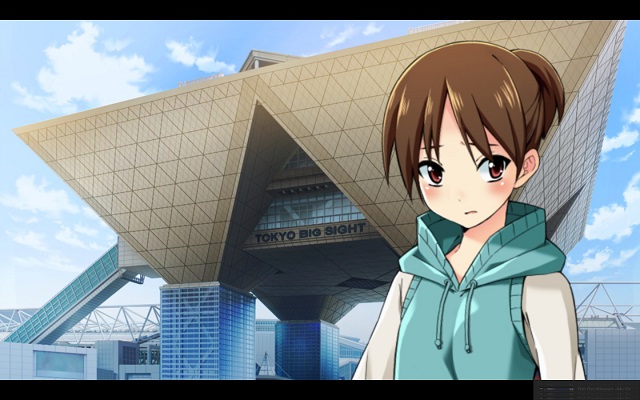 Yep, the game knows its audience.  Comiket is a potential destination, and GGN actually gives useful tips for dealing with the place ("bring your own water.  Day 1 is for this type of vendor, Day 2 is for that type.  Show up early." So on and so forth...).  To be fair, most of the tips could be applied to any convention with large crowds but that doesn't detract from any of it.  But it's not all otaku-based stuff, no! 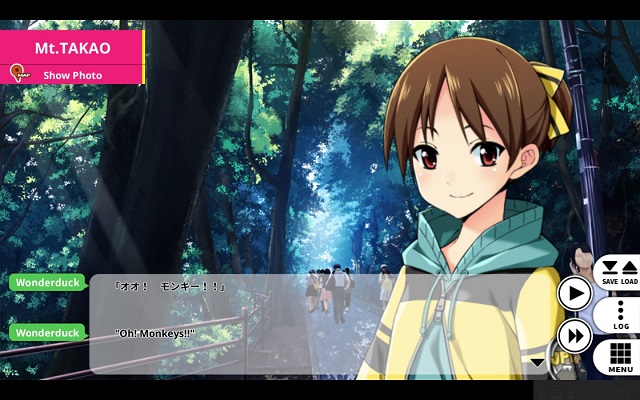 Look, I have no idea if any of the details given are accurate since I've never been to Japan, but it sure sounds good, and what research I've done after "visiting" the places in the game seems to match pretty well.  I think GGN honestly could be used as an awkward, not-in-depth travel guide.  You'd be better off picking up a Frommers or Fodors or Lonely Planet book, to be truthful.  But if you were in my situation, unemployed, bored, and having no realistic chance of going to Japan in this lifetime, GGN was a good way to spend a handful of hours.  But that's not why you've read this far, is it?  No, if I know my readers, you're wondering "but what about the girls?" 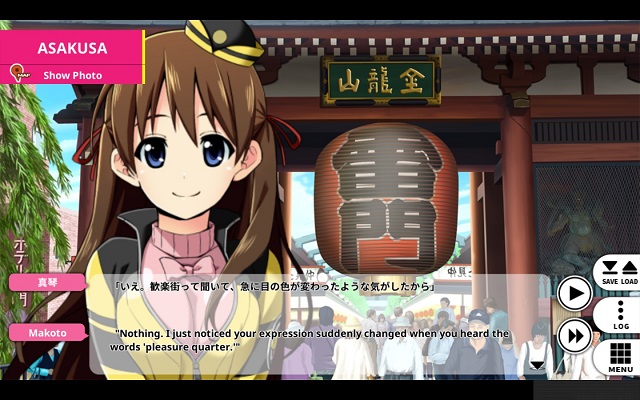 Behind the useful facade of GGN lurks a dating sim.  It's not a complex one to be sure, but it's there.  You may remember that you have three days where you get to choose destinations?  Well, whichever girl winds up being your tour guide the most during those days is the one you end up with.  After the trip to Kyoto, there's one more day where you visit the places your chosen girl likes to hang out. 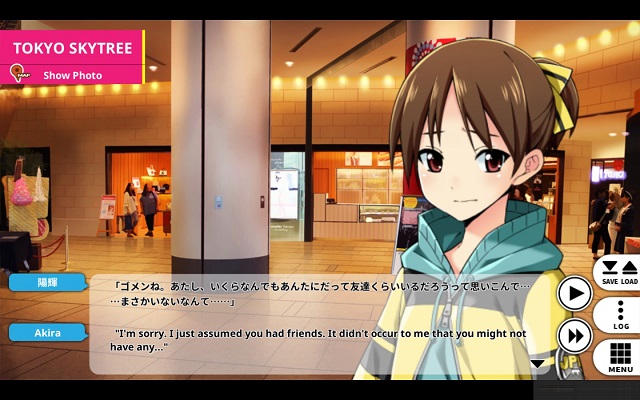 Alas, all good things must come to an end.  You eventually have to return to your country of origin, and... well, you'll have to play to find out what happens.  Spoilers, dontchaknow? 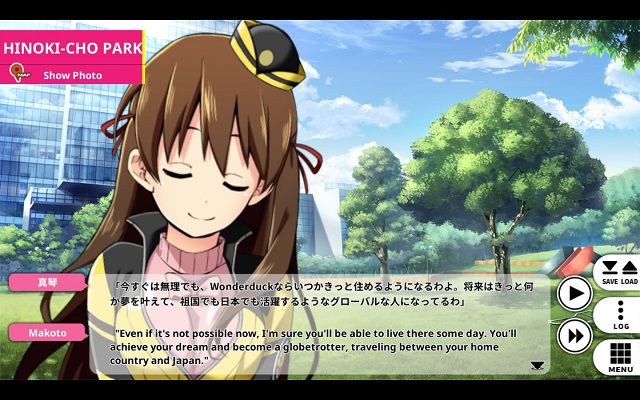 I'll admit to liking Akira more than her older sister.  She's snarky.  Makoto is much more of a yamato nadeshiko; indeed, in one private conversation she admits that she's always tried to be the "good child"... to the point where she doesn't know how to be anything else anymore, and she hates it.  By the time I learned that though, the blandness of her personality had already bored me.  Nope, of the two, Akira was the one I enjoyed "spending time with" in the game. 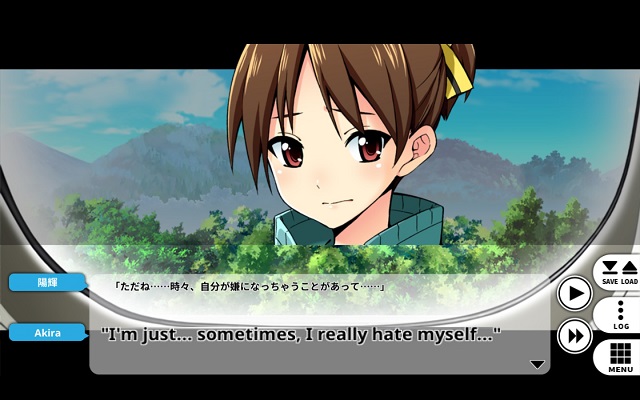 I enjoyed playing GGN.  Much to my surprise, honestly.  I thought that I had wasted my money, relatively insignificant an amount as it was, but really it was worth it.  Make sure you get it on sale, though.  Strangely, I'm going to tell you to play both versions!  See, the original GGN and the 2015 DLC have different endings, and for the most part the new stories and things in the DLC do not overlap with the original... so it's like getting two games at once.  Technically, the two big things the DLC does is go widescreen and animate the two girls somewhat.  Here's what the old version looked like: 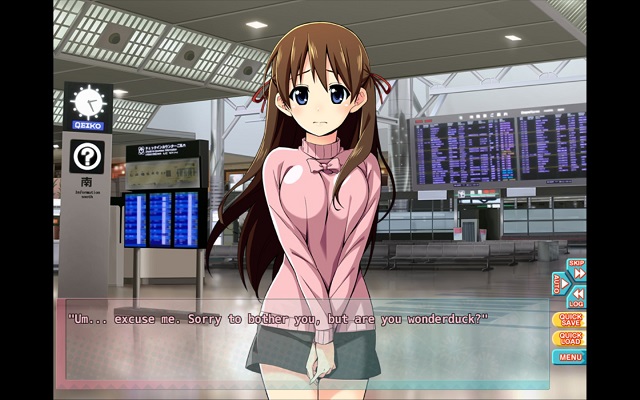 ...and the same scene from the new version: 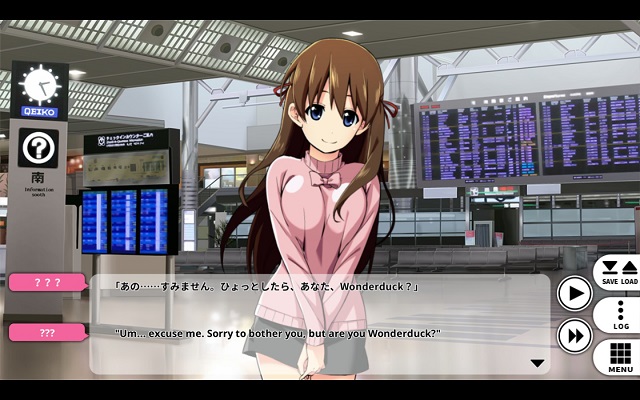 It's a small change, but an important one.  There's also maybe twice as many destinations to visit as well, and all of the locations have multiple "hotspots".  For example, going to Roppongi means you'll be visiting your nation's embassy, a shrine, a special mall, and a cemetery to boot.  I've spent 10 hours on the new version, and I still haven't gotten 100% completion yet.  It's been time... um... maybe not well spent, but not regretted. 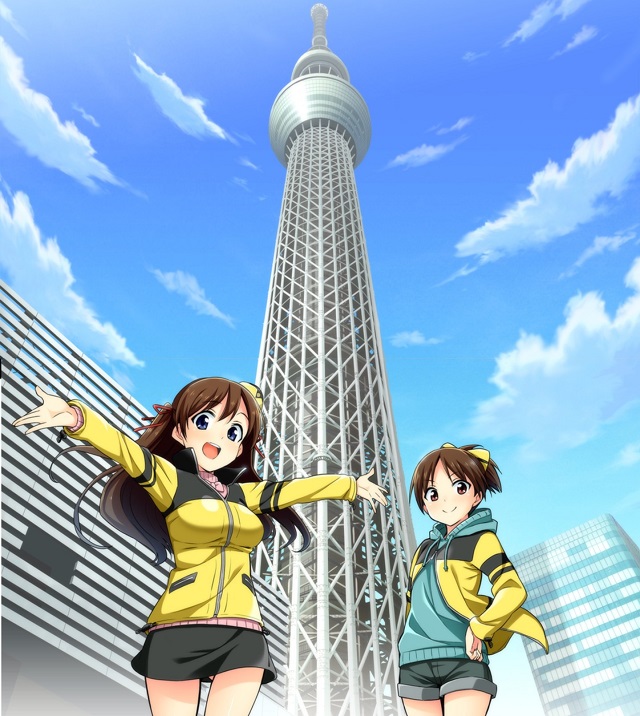 And if you're ever thinking of going to Tokyo... well, make sure you supplement the game with a good book or two.

One of the great things about Kickstarter is how it allows Japanese developers and English language localization groups to determine the market demand for visual novels, especially the big ones - the really, really big ones, since Clannad is probably the largest single game (In terms of script.) ever written.  A gamer who wants to play visual novels from Japan no longer has to either learn Japanese or hope that the English language publisher does not go out of business - the latter was what happened to Hirameki International, who released the excellent Ever 17 and was planning on bringing over the rest of the Infinity series before they went under.  Hirameki also brought over, using a clunky DVD game interface, Hourglass of Summer, which while falling into dating sim/renai game, is an excellent game in its' own right.

Digital releases has also opened-up a number of visual novels that would have never seen the initial hardcopy release in the US.  MangaGamer has been so successful with some of their releases that they later had hardcopy runs for those titles.  And we have the JAST group of labels that has partnered with NitroPlus to release some of the best known VNs in the US - as well as some notorious ones from other developers (Cough...School Days...Cough.).

So life is getting to be pretty good for people who want to play in English, any VN that is not made by Type-Moon.  I will admit to wishing that Sentimental Graffiti had a translation when it was released on PSN, but we can not always get what we want.

2 Funny you should mention Clannad, since the official English version was just released on 11/23.

3 Good review, though oddly the most useful thing I got out of it was in the above comment, after which I put Clannad on my Steam wishlist. *wry grin*

4 Moreover, Clannad is beating a few surprising things despite its high price ($42). I think it crushed Fallout 4 grossing at Steam last I checked.

5 It would a funny thing mentioning Clannad, if I had not be one of the people who backed the Kickstarter campaign.  I like the physical, no-DRM copy better.

Meaning your copy will arrive in a few months.  If Steam is the DRM you're talking about, I can live with it.  Hell, I've been using Steam for six or seven years now.  As far as DRM goes, it's the friendliest such thing ever... but we're not having that conversation here.

If immediacy was a concern, that might be a point, but my backlog is truly sizeable right now, so a couple of months is not an issue.