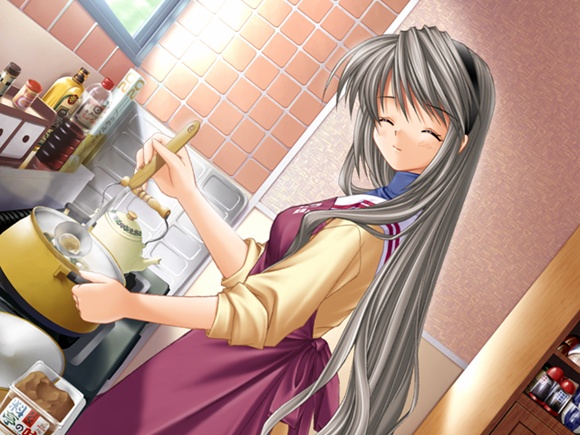 How could you have left this shot out of the anime?  What in the world were you thinking???  Perhaps it's in the "alternate route" OVA, ep24, which I have yet to watch (I wanted to finish Tomoyo's story in the game first).  Even if it is, you guys should have had it in ep18.

It's no surprise that I enjoyed the Clannad anime, really, but the game gives you so much more backstory on the characters, it's amazing.  Of course, Key had a lot more time to work with, but even so I'm still stunned by it all.

And I'm not even done with Tomoyo's story yet.  In fact, I've only run through Misae's route prior to this... she wasn't even a secondary character in the anime, more like a tertiary or... um... quadiary?  Anyways, minor.  But it was great to learn more about her (though it would have been nice to see the giant swing manuever animated), and I can't wait to meet more of the non-main people down the road.

Ha! I wouldn't have thought that was even possible. That brings up an interesting thought, though.

Have you seen the Toei movie version yet? I was lukewarm on the series, but ended up really liking the movie version. One of the main reasons I liked it was how they portrayed Sunohara - he was just as goofy at times, but was overall a really strong and likable guy.

I had made the assumption that Kyo-Ani had made him into a "whiny b*tch" for the comedy potential, and that the movie had gotten it right. It looks like I was way off base on that one, since the game is the source here. Still, I liked him much more as a hero.

BTW, after watching it I'm not sure if the OVA is going to please anyone. I suspect that fans of the series aren't going to like it, and fans of the movie are going to worry that this is a harbinger of how Kyo-Ani will handle the "After Story". I'm still holding out hope, though - if they can handle "Air" as well as they did, Kyo-Ani has high potential to shine on the after story.

2 Astro, I've got the movie, but I was only able to watch a few minutes of it.  I keep meaning to watch it, but something else always comes up to prevent it.

At the time it was released, the series was still coming out (I followed the widescreen version), and I really didn't want to see anything that could have been spoilers.

Regarding Sunohara, maybe it's just in the Tomoyo route that he's such a snotty punk.  Plenty of other stories in the game to go, after all...

3 True, the movie only followed the Nagisa route, so maybe Sunohara will be different there.

If you finish the game, though, you've got no excuse not to watch the movie since spoilers can't really apply anymore.

Not that I'm pushing you to watch it, or anything...

Oh, don't get me wrong, Astro, I fully intend to watch the movie, relatively soon.  If I waited to finish the game before I watched it, it'd be somewhere around November (there ARE 11 different story paths to play, after all), so I won't