F1Pr0n: MegaPr0n 2011 Over the past two days, seven F1 teams brought out their cars for the 2011 season.  Unfortunately, only one, Sauber, actually bothered to take glamour shots for our perusal.  They, of course, got a F1 Pr0n entry all to themselves.  Lotus released a couple of grainy and poorly exposed pictures and some computer renderings of their new car, so they don't get nuthin' until it hits the track on Wednesday.

But Renault, Williams, Mercedes, Red Bull and Toro Rosso?  They get to share a post... the first ever F1 MegaPr0n!

We'll start with the team that got the least amount of worthwhile photos, Toro Rosso. 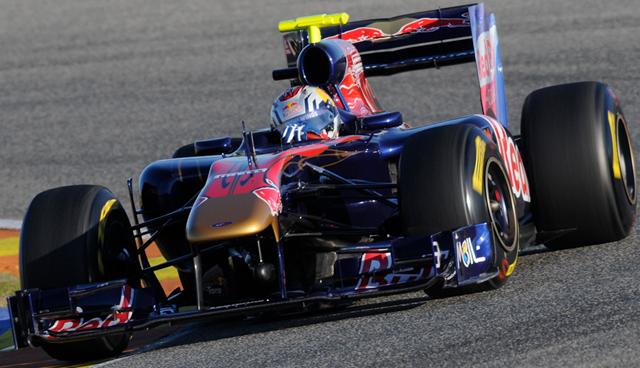 As near as can be told, the STR6 is merely an evolution of last year's chassis, which was, in effect, a Red Bull RB4 taken in a different direction than the parent team's chassis, the RB6.  That's hardly a bad thing, considering that the RB5 fought tooth and nail with Brawn for the constructor's championship.  Still, I was hoping for something a smidge more exciting from the Red Bull "B" team.  It's a lower nose than that being copied by... well, just about everybody.  It's possible that Toro Rosso is running an interim design, one that uses pieces from last year's car, until the whole package is complete and tested.  Of course, they might be trying to step out of the shadow of the "A" team, too.  Might be interesting, that.  On the whole though, it looks pretty vanilla, or at least as vanilla as any F1 car can look.  I'll pay attention to the car over the next few weeks and if there's any major change I'll let you know.

Next up, 2010's Disappointment of the Year, Mercedes!

First off, I love the new paint job.  Last year's all-silver livery was historical, a hearkening back to the "Silver Arrows" of Mercedes' past, but it was a little dull.  The addition of the Petronas green livens it up a bit.  As far as the chassis, named the MGP-W02, goes, that nose reminds me somewhat of a platypus' bill.  It's certainly higher than the W01's, though.  Sidepod inlets are huge, but a triangular shape as opposed to the rectangular of last year's.  Is that because the designers are trying to move away from the BrawnGP design?  Or just an inevitable design evolution?  Kinda hard to tell from this photo, truth be told.  I suppose we should get used to rollouts like this, as opposed to the high-end, no-expense-spared affairs of the past.  Darn shame, though.

Our next entry comes from the World Champions themselves, Red Bull!

If there was one chassis I wasn't looking forward to seeing, it was the new RB7.  I mean, let's face it: the RB6 was the best car all season; on those few occasions it didn't win, well, it wasn't usually the fault of the chassis.  With uber-aerodynamicist Adrian Newey on the payroll, it's not like there were going to be many external changes.

And indeed, there aren't.  Oh sure, there's a new thing on the centerline of the rear wing, which I assume is part of the actuator for the new movable bits, but otherwise?  Pretty much the same.  Sidepod intakes look to be a smidge smaller, but it's really difficult to tell: black on dark blue does not visibility make.  I'm sure there's something different, perhaps many somethings, but my guess is that they're all internal.

Speaking of black on dark blue, allow me to present the Williams FW33.

I really do hope they keep the car number in a white circle like that on the real livery; this is just the testing color scheme.  I'm going to do something I've avoided this year... I'm going to post a picture of last years' car for comparison purposes.

Sharper downward turn on the nose, angled strut connecting the front wing to it as well.  The thing that lept out at me instantly, though, was the sidepod.  It's definitely more graceful in the FW33, more angled across the top where the FW32 was rounded.  I'm sure some of that is due to the dark color preventing details from coming out, but not all.  The rear wing is different as well, with a notch taken out as opposed to the whole upper-rear corner (if you get what I'm talking about).  It's a bunch of subtle differences that, to me, add up to a chassis that's more pleasing to the eye... or maybe it's the livery, I dunno.

Speaking of liveries, it's time to bring out the best-damn-lookin' paintjob of the year.

Renault this season will be more correctly known as Lotus-Renault, for reasons that are much too confusing to get into here, and this livery is a tribute to the classic Lotus "John Player Special" livery used from 1972 to 1986... and my all-time favorite to boot.  It's certainly better than the bumblebee colors used last year.  And while the body seems pretty normal, there's something very clever going on with the R31... very clever indeed.

As you're all aware, the trick diffusers of the past two years have been outlawed.  No more double diffusers, no more blown diffusers where the exhaust gases flowed directly onto the diffuser, none of that is allowed now.  Of course, that removes a small (or not that small, perhaps) but measurable amount of downforce from the equation.  Now, look carefully at the rear end of the car, right around where the word "elf" is located.  That's roughly where the exhaust pipes should be, yet there are none visible.  Good reason for that: they aren't there.  In fact, there aren't ANY exhaust ports anywhere on the rear of the car.  Instead, Renault has trunked the exhaust to the bottom of the front of the sidepods... where they blow onto and underneath the floor of the chassis.  This introduces faster (and hotter!) airflow under the car, which in turn increases the downforce as it passes beneath the flat bottom, just like an airplane wing induces lift... except opposite, of course.  It's a brilliant idea, and one that Renault deserves to have pay off big.  Of course, there are potential problems here.  Extra cooling and insulation will be needed around the pipes, since F1 engines kick out exhaust gases at approximately 800°C.  Instead of going right out the back, now the piping is running around such things as the fuel tank, the radiators and the electronics... none of which play well with high heat.  Look for the chassis to perhaps have overheating problems in Bahrain, Malaysia and Abu Dhabi.  But it might just be worth it, considering how clever the idea is.

So that's it for the F1 MegaPr0n!  The real Lotus should be taking the track on Wednesday, and with any luck we'll get some good pics of that challenger.  Check back tomorrow!

1 I saw a picture of the Renault this afternoon and just knew you were going to approve. There are some pictures out there of the exhaust outlet, but the photographer put his watermark right over them, so that they're completely useless. It will be interesting to see what that does for them, I have no idea what the exhaust flow is, I did some napkin math for exhaust volume and came up with outrageous numbers, so I'm probably mis-calculating somewhere, but if not that's a lot of airflow they've redirected to a good location.

All of the cars have some sort of spike sticking up in the top front between the front wheels. Is that a radio antenna? Seems like a source of drag, so I assume it's mandated by the rules.

The thing that worries me about the Renault exhaust is whether it's going to suffocate the driver when the car is sitting still. I guess a pitstop is too short for that to be an issue, but how about before the race start?

3 Steven, I'm not sure if those are antennas for the cockpit radio or for data telemetry, or both.  But yes, those spikes are antennas.  As far as suffocating the driver goes, I'd think that the amount of fresh air in the immediate vicinity of the cockpit would be enough to counteract the downward-pointing exhausts, even standing still.  Haven't read any reports of Robert Kubica dropping dead.  I didn't even consider the implication of having the exhaust coming out next to the driver, though.

David, I've seen the pictures you're talking about, and let's face it... even if the watermark wasn't there, they don't really show much of anything anyway.  "Oh look, it's a hole in an unidentified piece of bodywork!"  As far as total exhaust flow, when it comes to F1 engines, even ridiculous numbers might very well be true.  I mean, a 200lb engine spinning at 18000 rpm and turning out ~750hp?  Anything is possible.