F1 Pr0n: Renault R30 Renault also rolled out their new car, the R30, today... and there are a few surprises. 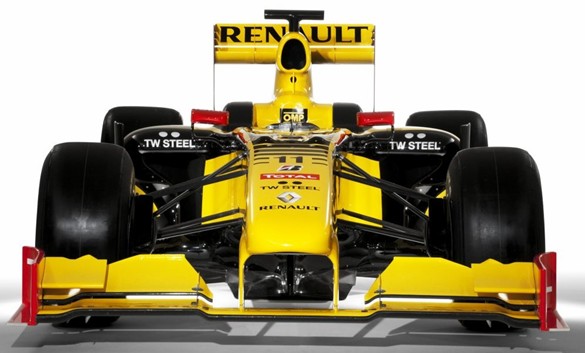 It's the first of the 2010 racers to have a low-slung nose.  The idealist would suggest that they've found that it's better than the high nose.  The cynic, however, will say that all the prevaricating over coming back that Renault did last year prevented them from doing enough design work to discover the possible benefits of the high nose.  The sidepod air intakes are larger and lower than the other new releases as well.  The front wing is pretty generic, but that'd be easy to change.

My apologies for the render, but it's the only side shot the team has released so far.  The dorsal fin is a RB5-style.  The sidepods are similar to the Ferrari F10's... and last year's R29. 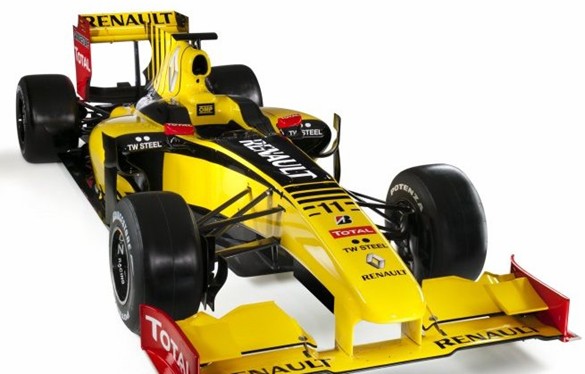 The biggest change, obviously, is to the livery.  The past few years have seen the car look like it was afflicted with mange.  This paintjob is a throwback to the late 1970s, the last time the team used yellow and black.  It's also quite similar to the color scheme the Jordans. used in the early 2000s.  Quite striking, I'm beginning to think that it's better than the McLaren glare on wheels.  Of course, the beauty queen championship doesn't count for anything.  We'll see how quick it is soon, however.

2 And nobody shows off the diffuser area, ke ke ke.

3 Yah.  The closest I could find was, actually, Renault's rear... which had a trash bag over the diffuser.  We'll see more on Monday.

One of the reasons the P-51 Mustang was so fast was that the engine cooling air was ducted out the bottom rear and yielded additional thrust, something called the Meredith Effect.

Could something like that be done with an F1 car? Would it be legal? (Are they already doing it?)

5 Well, looking online, it appears that the Meredith Effect (which I had never heard of before just now) is useful only at much higher power levels than that generated by a F1 car.

Which isn't to say that it's non-existent at lower speeds, just perhaps not worth the trouble.  The various ducts and piping and what-have-you the engineers would need to install to get the small bonus it'd generate... would probably counter the bonus and add extra complexity to the car.

Would it be legal?  I think the answer clearly would be 'yes.'  There's already some (very) small oomph generated by the exhaust system.  The Meredith Effect would just add to that.  Of course, if a team DID manage to get a measurable and worthwhile bonus from it, the FIA would probably outlaw it, much the same way they did the fan car, and probably for the same reason.

6 That's too bad. I had this image of the jet engine on the back of the Batmobile...

7 I can't even think of all the ways that'd mess with the aero of the car behind... but it made me snicker just the same.

8 Hey, you tailgate, you get what you deserve.

The principle obviously was well-known in the English-speaking part of the aviation industry as well. "Fundamentals of Fighter Design" by Ray Whitford notes (p. 61): "In 1926 it was realized that airflow through the radiators on liquid-cooled engines could, if properly ducted, eliminate the cooling drag and even produce a little thrust at speeds above 260 kts (483 km/h)." "

10 But you want tailgating, and positive effects from traveling in another car's slipstream, because that promotes running closely to other cars and passing, and makes the race more exciting. If it's just a battle to see who wins the pole and gets to fire up their afterburner first, well, why even bother to watch the race? Or run it, for that matter?

12 (There are courses in F1 where there's essentially no passing, right? Because the shape of the course is such that passing is impossible? Monaco?)

13 You can pass at Monaco, it's just incredibly difficult and generally counter-productive as you usually end up breaking your car.

14 I wonder what's up with all the smaller teams. Only majors turned up for the first testing sessions.

15 Well, you'll note that Red Bull themselves aren't at this session.  They and Force India will be debuting on Feb 10th.  Lotus will be bringing out their car on the 12th.  USF1 will be running at the Barber Motorsport Park in Alabama sometime "early in February."

I can't find anything about Virgin F1 and Campos Meta.

16 Correction: Virgin is apparently going to be rolling out on Wednesday, Feb 3, with a "private test" at Silverstone on Thursday and Friday.